Accessibility links
You've Never Heard Simon And Garfunkel's 'Bookends'?! : All Songs Considered Hear how intern Jenna Strucko discovered an "old friend" of her own in the classic folk album.

Note: This is a recurring series in which we ask our unimaginably young interns to review classic albums they've never heard before. Until very recently, Jenna Strucko was an intern for NPR Music. 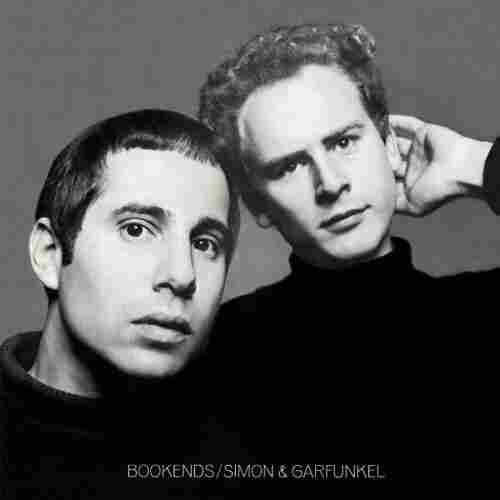 My musical relationship with Simon & Garfunkel began with an influence that any self-respecting, music-loving twenty-something would now be ashamed to admit: The Garden State soundtrack. From there, my knowledge of Simon & Garfunkel continued to be informed solely by incomplete pop culture encounters with the duo. Even though I've heard "Mrs. Robinson," I've never seen The Graduate in its entirety. "America" breezed right by me in Almost Famous, and I never quite understood why the song surrounding a particularly poignant scene in 500 Days Of Summer was called "Bookends."

But now, my narrow cinematic context of Simon & Garfunkel has been broadened. Listening to Bookends was like reuniting with an old friend I didn't know that I had: only after hearing the album start to finish did I recognize that these songs have been around me all along.

Simon & Garfunkel hit on so many elements of music that I am naturally drawn to — simple instrumentation, thought-provoking lyrics with narrative leanings and arrangements that allow both to shine.

But it's the story threaded throughout Bookends that riveted me. The first half of the album is practically a film in and of itself. My high levels of sentimentality might be to blame, but upon first listen, the lyrics hit me square between the eyes: the theme of a life of uncertainty culminating (but not necessarily becoming resolved) in old age was an emotionally packed one, even for this overly-optimistic twenty-year-old. By the time the duo transitioned into "Bookends," I felt like I could just cry my eyes out — and not because Summer and Tom were about to break up.

And that's what I've come to discover that I love about Simon & Garfunkel — they are absolute masters of emotive, transformative lyricism. In fact, it kind of scared me how much of an impact the first seven tracks of Bookends had on my psyche. If I had been listening to it on vinyl, I don't think I would have been able to muster the wherewithal to cross the room and flip over the record. But luckily, the album kept rolling and the upbeat tone of "Fakin' It" and silly lightheartedness of "Punky's Dilemma" almost immediately lifted my spirits. Whether I was dancing along or on the brink of tears, I loved the fact that Bookends engaged me emotionally from start to finish.

By the end of the album, the feeling that this record and I were old friends was only intensified, and with further listens I realized that I had an even deeper connection to the album than I wanted to admit. The music took on its own identity in my eyes, and the album itself became personified — it was almost like the record and I had been through some tough times together and that we'd come out stronger on the other side. I guess I have the films of my teenage years to thank for my initial connection to Simon & Garfunkel, but I'm overjoyed to have found a true friend in Bookends.

Now... who wants to watch The Graduate?!?