Accessibility links
Want To See Regina Spektor In Concert? : All Songs Considered Join us for an evening with the singer-songwriter live at New York's Le Poisson Rouge on May 31. 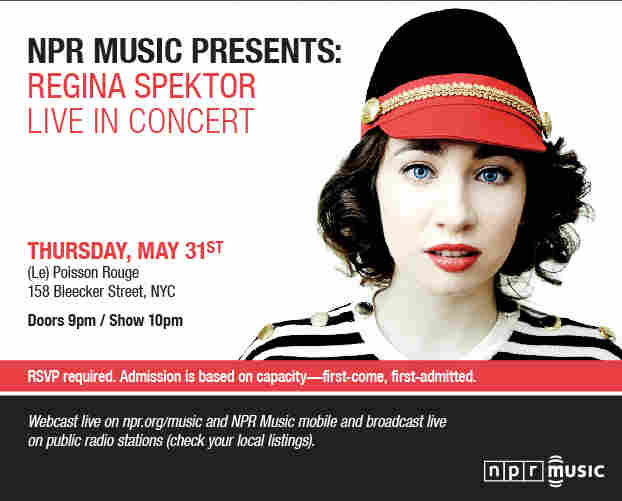 On May 31, we'll live webcast and broadcast a concert by Regina Spektor from New York's Le Poisson Rouge. You'll be able to watch the whole thing live on NPR Music and via our apps as it's happening, beginning at 10 p.m. ET.

But if you're in New York City on the night of the show and want to go, we've got free tickets for you. Tickets are very limited, so grab one for you and a guest while you can on a first-come, first-served basis.

[UPDATE: TICKETS ARE NO LONGER AVAILABLE]

While Spektor's latest album is richly orchestrated, her performance at Le Poisson Rouge will be a stripped-down set, with Spektor joined by an additional keyboardist, a cellist and a drummer. She'll perform old favorites and introduce highlights from her new album, What We Saw From the Cheap Seats, out on May 29.

In addition to watching our live video stream, you'll also be able to hear the show broadcast on NPR stations, including WFUV and WXPN.