Accessibility links
Barbra Streisand Live: Brooklyn Girl, Still Making Good : All Songs Considered This past week Barbra Streisand, born and raised in Brooklyn, played there for the first time since she was eight years old. She followed Jay-Z, making her the second performer ever at a new arena. 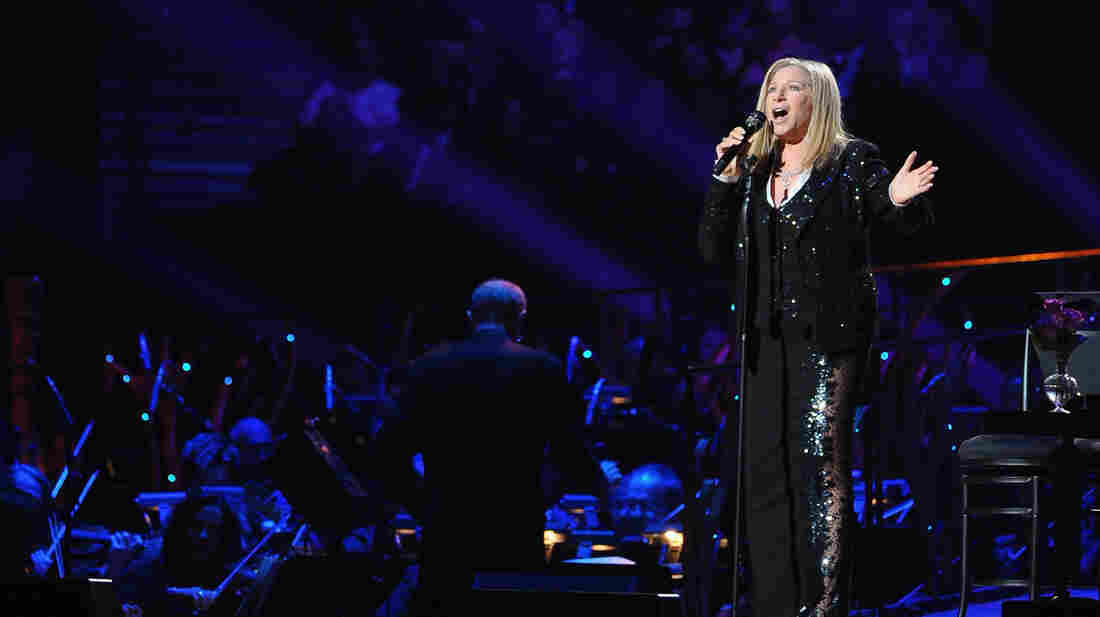 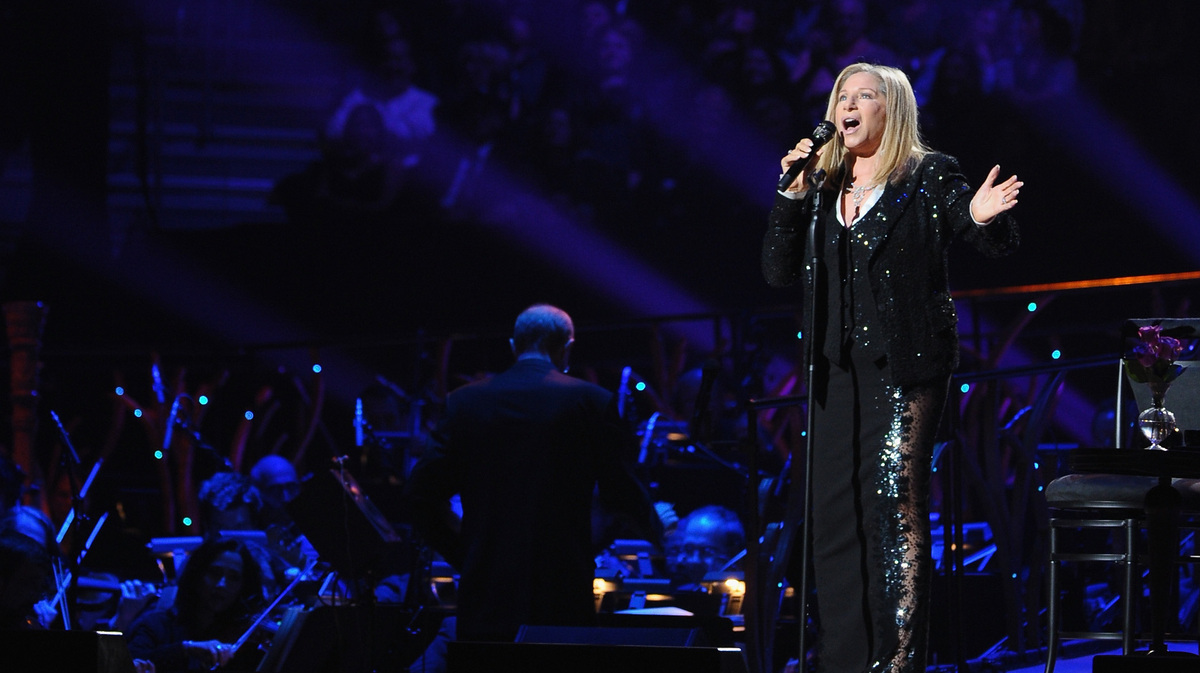 Barbra Streisand on stage at the Barclays Center in Brooklyn on October 11, 2012

This past week Barbra Streisand, born and raised in Brooklyn, played the borough for the first time since she was eight years old. Back then it was on somebody's stoop on Pulaski Street in Bed-Stuy. Now 70 — after winning all the awards (Emmy, Grammy, Tony, Oscar, etc.) — she was only the second performer at a new venue in her hometown, a 19,000 seat basketball and entertainment arena called the Barclays Center.

The first performer there was Jay-Z, who took the stage a couple of weeks ago in a Brooklyn Nets jersey with his government name on the back. Jay-Z is 42, grew up in the nearby Marcy Projects and, as he has told everyone who will listen, used to stash his drugs two blocks from the home court of the NBA team he now owns a piece of. Late last month he opened with "Where I'm From," which includes the line, "Where I'm from, Marcy son, ain't nothing nice."

Streisand opened Saturday's set with "As If We Never Said Goodbye," which, divorced from Sunset Boulevard, sounded tender. "I'm trembling now," she sang, "you can't know how I've missed you."

For her second costume change of the night, Streisand re-emerged rocking a floor-length sequined cape bearing the Nets' logo on the front and her last name on the back. It was funny, but she also pulled it off. The lady has swagger like Jay.

There were other similarities between the two shows. Onstage, Jay and Barbra take all the time they need. They stand by themselves and deliver (both of them played with live musicians, but they were placed behind and above or below the stars). And both of them used time between songs to help brand the venue with a scrappy, work it to the bone, spread love version of Brooklyn pride. During her set, photo montages of Streisand as a little kid in Flatbush, or on Coney Island, were projected on the stage. Her high school, Erasmus Hall High, came up a lot. During one break for her, we watched scenes from the 1981 documentary about her Brooklyn neighbors. She performed lyrics rewritten to include "hot bialys."

Most of the people around me that night had grown up in Brooklyn, too. But, like Barbra (and Jay), most of them don't live there anymore. They're in Connecticut and Long Island. Within a four-person radius I saw five people cry at one point or another — 30-year-olds and 80-year-olds alike. I asked some of them why, and they said they just loved her, they were so proud of her and she sounds amazing. One lady accidentally spoiled the big surprise of the night for me. She said Streisand was going to bring her son, the singer Jason Gould, out in the second half. She did, and at one point Gould remarked that both of them had #1-selling releases that night. "We're Number One in Brooklyn, Mom!" "Oh, no," she said. "Not just Brooklyn. We're Number One in more places than Brooklyn!"

Barbra Streisand moved away a long time ago. Twice, she called Brooklyn "there" instead of "here". A couple years ago the group Duck Sauce had an unexpected hit with a song whose hook included some feminine "woo"s and the words "Barbra Streisand." In the video musicians like Questlove and DJ Premier mouth the lyric and a man wearing a Streisand wig, lipstick and pearls paddles a rowboat in Central Park, not Prospect. She played the video, at full volume, during intermission on Saturday. When three Italian tenors (aged 17, 18 and 19) came out to sing with her they beatboxed and sang that hook. She used the word "buttah" at one point and she had to pause to give room for the crowd's delight. Streisand does not deny her audience the enjoyment it gets from her, and the character she plays on our national stage. She, like Jay, has long demonstrated an unexpected comfort with being better known for the way strangers feel about her, than for who she really is and what she's really done.

"It's great to see her in Brooklyn," said Linda Levy, who was sitting to my right. "It's very sentimental." Linda grew up in Bensonhurst, and now she lives in Stamford, Conn. Both Levy and Streisand retain their accents, but the clarity of Streisand's voice, even as it's deepened with age, is thrilling. That voice is the prize fans get for going out to see her. It's propulsive, and the power and thought behind it is organized and mature. She's so good, she makes you feel safe enough to go those devastating emotional places the American songbook and Broadway songs she owns traverse.

During a brief question and answer portion of the show, Streisand said she's terrible at lip-syncing and we were just going to have to hear her sing live. People stood up for that one. She's a pro. "Don't Rain on My Parade" blew my damn mind. People will pay a lot of money to hear something that sounds impossible. To see somebody do something they can't do. The character she plays on our local stage is not that of hometown girl made good — she's the one who still runs this town, night after night.

And at 70, she has a sense of humor. She's frank. She finds what's flattering in any type of attention, and now she's lent some of her Brooklyn credibility to a billion dollar development bent on legitimizing its relationship to the place she grew up. Streisand does not disappoint. Sitting on stage with his mother, Jason Gould looked out into the crowd and said, "So these are your people." She nodded vigorously. There were tears on both sides of me.