Accessibility links
The Most Beautiful Voice You'll Hear Today : All Songs Considered On his latest video, for the song "You," London-based singer Keaton Henson bares the remains of a profoundly broken heart, while walking through the desolate landscape of the California desert.

The Keaton Henson who appears on the new album Birthdays is an avowed hermit with a profoundly broken heart. He also has one of the most beautiful voices I've heard. The 24 year-old singer from London, who says he rarely leaves his bedroom, bares his wrecked emotional remains in an arresting new video for the song "You."

Henson squats alone in the desert with his guitar, as the wind howls. It's a landscape as desolate as the shattered world he was left with after a former love betrayed him and crushed his heart. "If you must die, sweetheart," Henson sings, "die knowing your life was my life's best part."

Henson only began writing songs a few years ago to help heal the wounds of lost love. He self-released his first album, Dear... in late 2010 and has since signed with Anti. Henson is also a poet and illustrator who's also released a graphic novel called Gloaming. You can see some of his work on his website.

When asked via email to tell us a little bit about the song "You," Henson shared his thoughts in the form of an illustration: 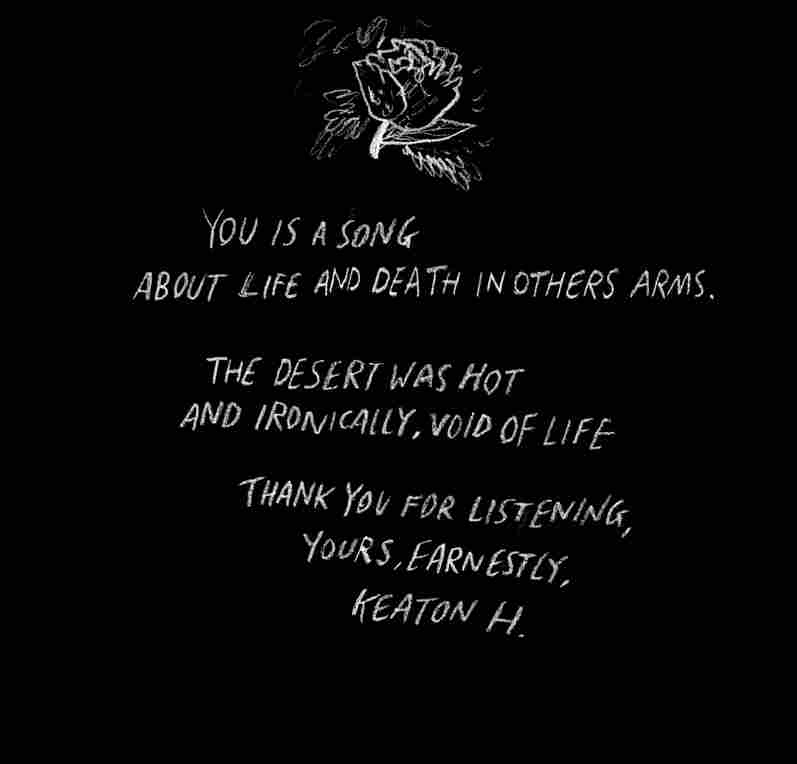 You can hear more from Keaton Henson on this edition of All Songs Considered.