Accessibility links
Results? The Albums Everyone Can Love : All Songs Considered Is it possible to come up with a top ten list of records everyone can agree on? What's been the most popular decade for music? What are the least-heard albums? We found answers to these questions and more in our summer-long poll.

Results? The Albums Everyone Can Love

Results? The Albums Everyone Can Love 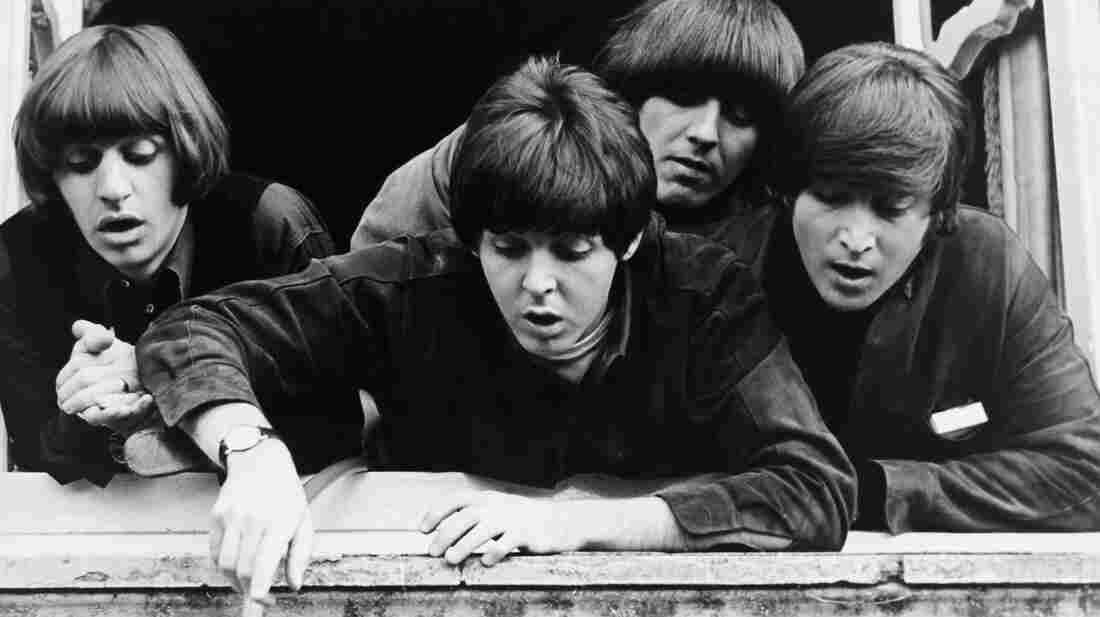 A while back (a long while back), Bob Boilen and I were sitting around the office, chatting like we do about music and life, and got to wondering: Is it possible to come up with a top ten list of albums that everyone can agree on?

To answer that question (because we had to know) we spent much of the 2012 summer posting weekly polls with lists of album titles for people to vote on. Each poll had 20 albums to consider. Voters could say "yes" they loved the record, "no" they didn't love the record, or that they "haven't really heard it." We had to include the last option because even though most of the albums we put up for vote were pretty popular, landmark recordings, we figured there'd still be a lot of people who hadn't heard them and we didn't want to force them to commit one way or the other to a record they hadn't spent a lot of time with. And while restricting the options to "love" or "don't love," might seem too limiting, we really wanted to avoid middle-of-the-road responses. We didn't want to know if you only liked or kind of liked or even liked an album a lot. We wanted passion. It wasn't a terribly scientific or sophisticated approach, and the voting tool we used was really elementary. But we are simple music nerds, not number-crunchers, so we figured it'd do the trick.

Last fall, after several months of voting on hundreds of albums, we looked over the results and had our answer! No. You can't really make a top ten list of records everyone can 100 percent agree on. Our tastes are way too fragmented and diverse. And the kind of love we have for one record is often different from the love we have for another, making it impossible to compare the two fairly.

But even if we didn't get 100 percent agreement on these, we did come up with some interesting lists worth sharing. Here are the overall top ten most-loved albums in our poll (we threw out the votes of those who hadn't heard the records). 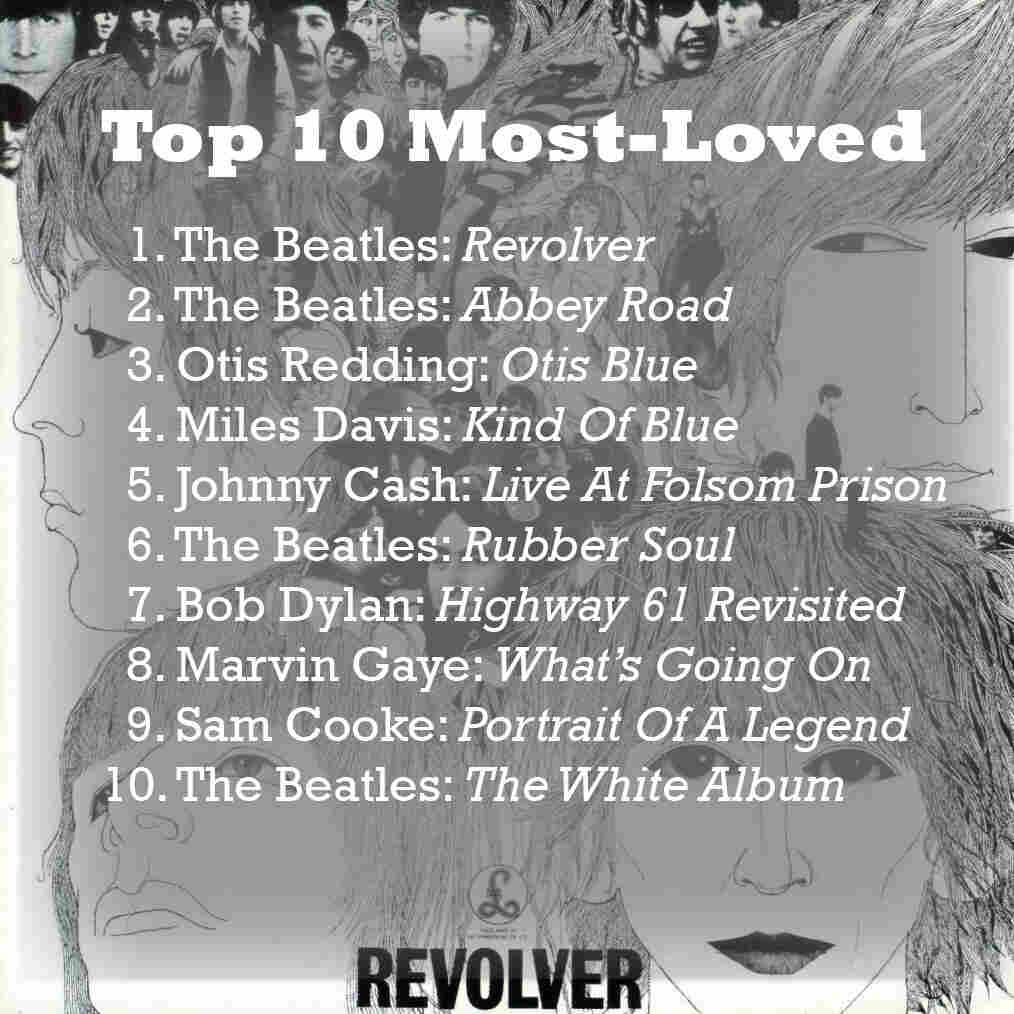 Note that the highest-rated album, Revolver, only managed to get 92 percent approval in our poll. These are otherwise all brilliant albums with incredibly broad appeal. I'm even fine with seeing more than one Beatles record on there. But [most] of these albums came out in the 1960s. Were the '60s really that much better than all the other decades? Or do our tastes tend to favor records that have been around long enough to be declared classics? More on this later.

Perhaps the most glaring issue with the top ten most-loved list is that it's all-male. Where was the love for Joni Mitchell's Blue or Carol King's Tapestry or the many other amazing, life-changing, profoundly treasured albums by women? Also, while jazz and soul and country are somewhat represented, among the most popular genres, hip-hop isn't represented on this list at all, even though we included a number of important hip-hop albums in our poll. 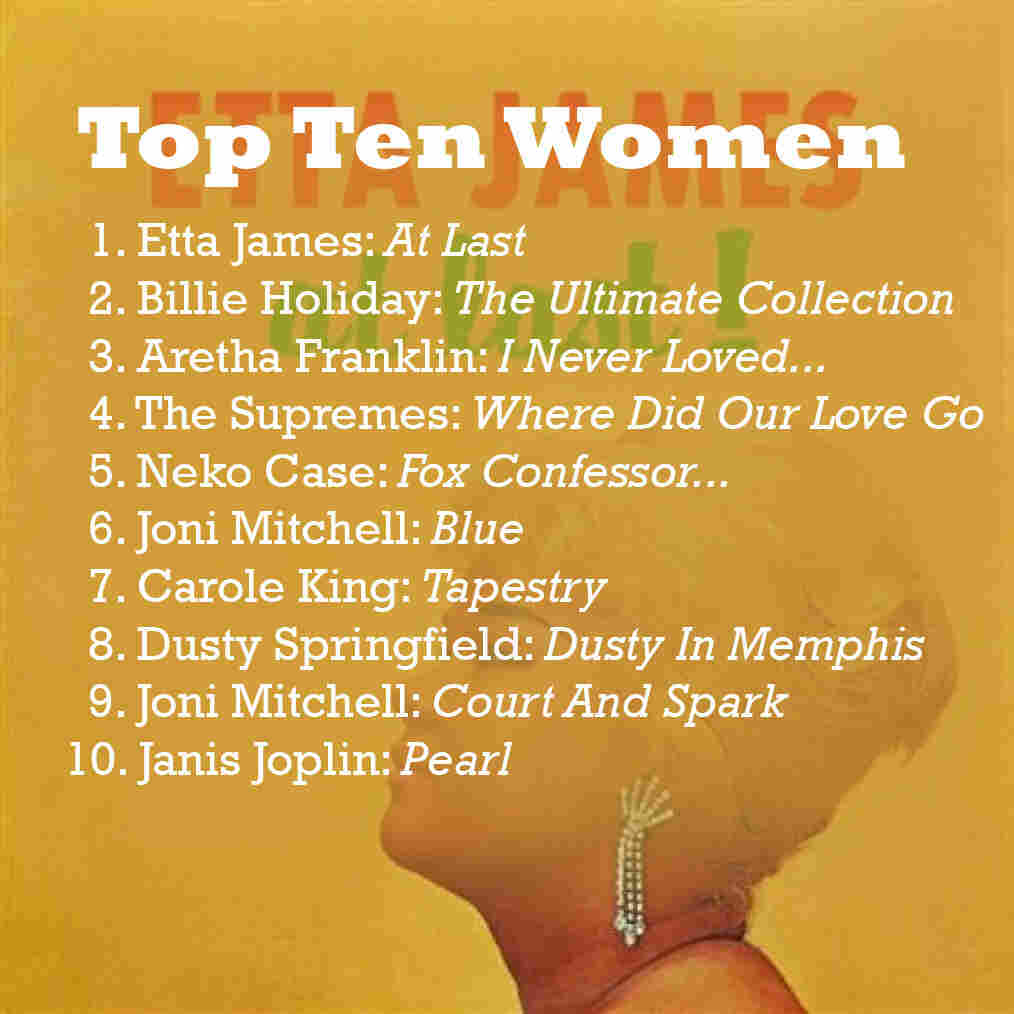 Etta James just missed out making the top ten most-loved list by one percentage point. But most of these numbers are shockingly low. I mean, it's been a while since I was in school, but isn't a 68 percent basically a "D"? A "D" for Pearl? Seriously?

There were also some curious surprises along the way that challenged a lot of our assumptions. Take, for example, an insanely popular, multi-platinum-selling album like Whitney Houston's Bodyguard Soundtrack. It was, by far, one of the least-loved albums we included in our survey. A third of our audience hadn't even heard it. 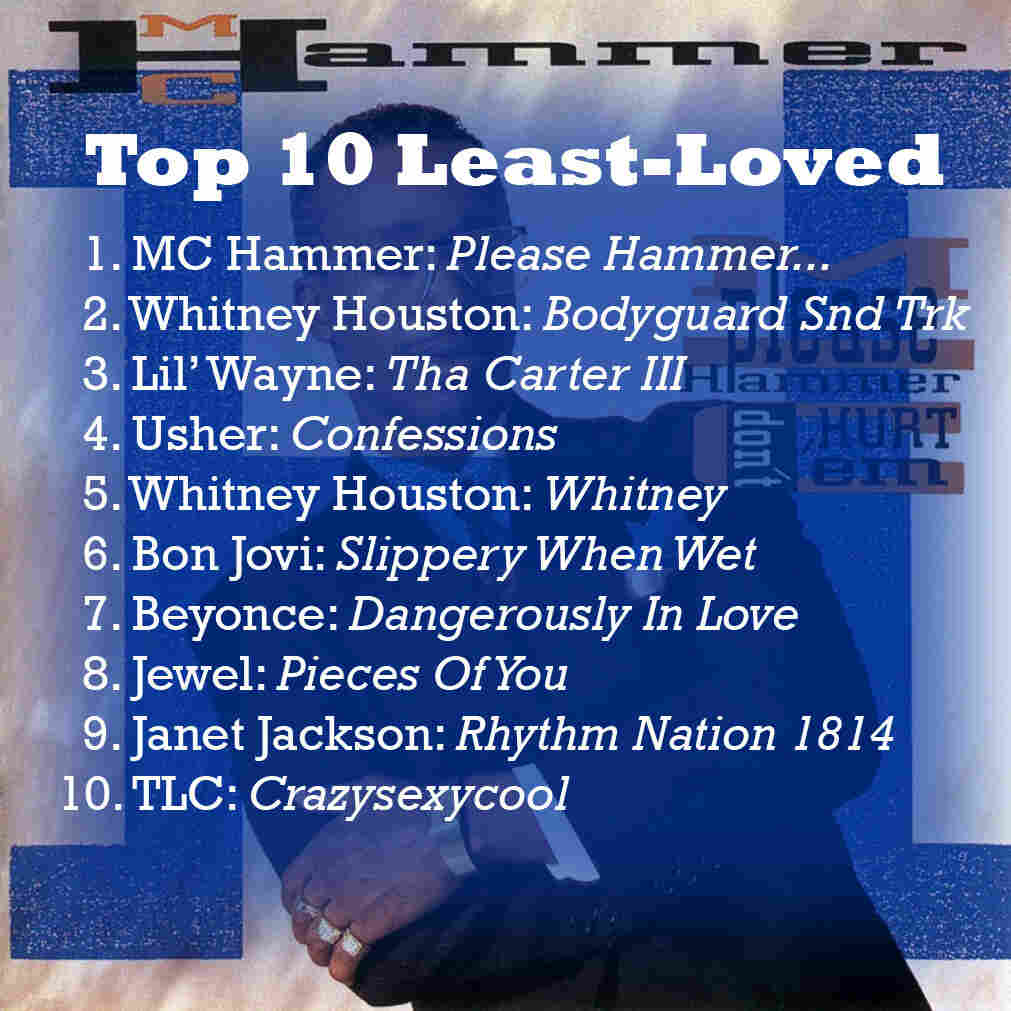 The list of least-loved albums raised some eyebrows here, perhaps more so than any of the other lists we managed to wring out of our poll. Maybe it's no surprise to see Please Hammer, Don't Hurt 'Em, or Jewel's Pieces Of You on there. But there are a number of undeniable, well-established classics on this list, including Lil' Wayne's Tha Carter III, Janet Jackson's Rhythm Nation 1814 (I was particularly shocked by that one) and TLC's Crazysexycool. The least-loved records among those who took our poll are mostly R&B, hip-hop and rap, which probably says more about our personal tastes than the music itself. 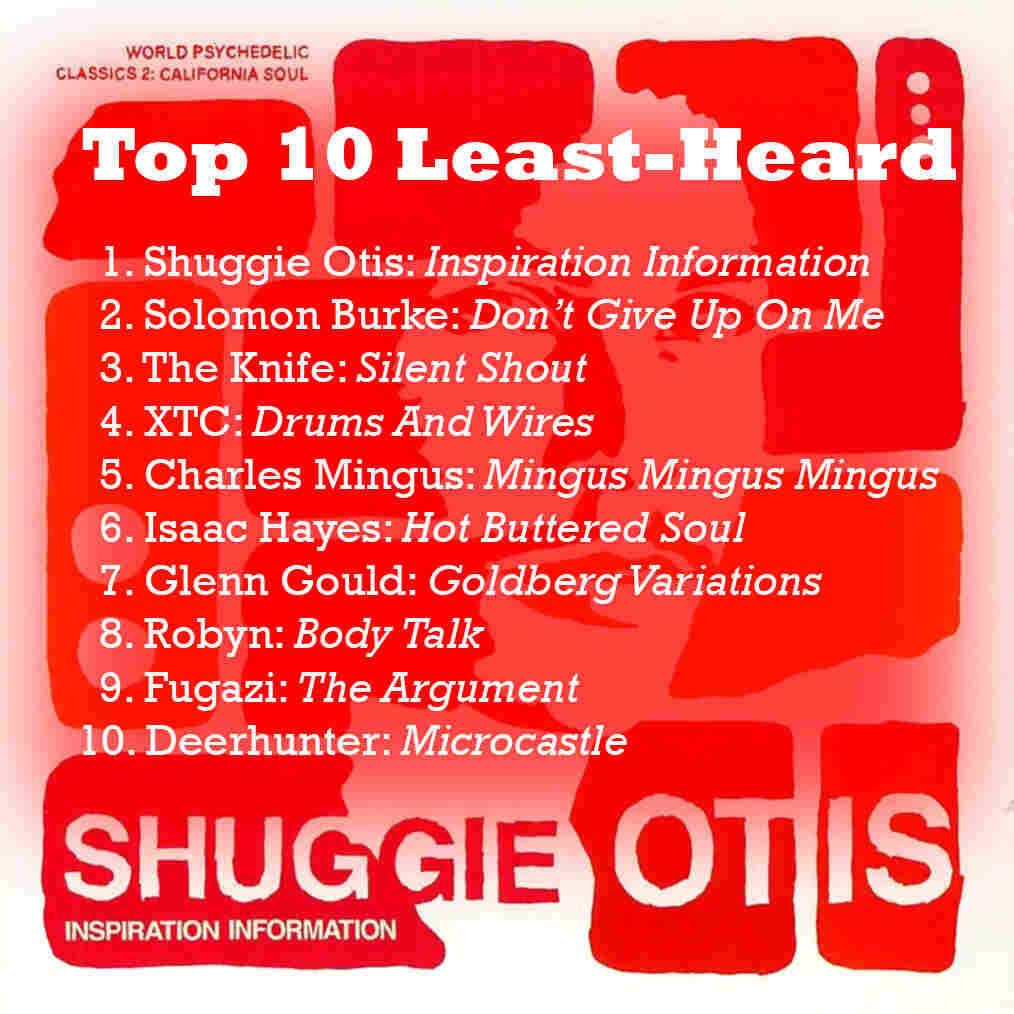 It's kind of shocking so few people have heard some of these albums. Seriously. If you haven't already, do yourself a favor and listen to every one of them on that list.

One last result: While our pool of albums was by no means exhaustive, we think it did a pretty good job of representing the best each decade had to offer. According to our results, no other period of music has been more loved than the '50s and '60s. It hasn't even been close. There was a major drop off in the 1970s and things only got worse through the '80s and '90s, with a very slight improvement in recent years.

Our apologies for taking so long to get these results to you. Time really got away from us on this one! (tugs at collar). Also, we weren't entirely sure what the results meant. No matter how you parse out the data, it offers an incomplete narrative. Was it fair to put a classical album up against a metal one? Or a hip-hop record up against a folk album? What if voters liked the album but didn't love it? How many albums make a big enough sample? If a bridge over a deep valley is out and all you have is an infinite amount of rope, how do you get across?

If you think you know the answers, or if you have any other thoughts about these lists, let us know in the comments section or via Twitter @allsongs.