Accessibility links
Tom Stoppard's Daring 'Dark Side Of The Moon' Makeover : All Songs Considered To celebrate the 40th anniversary of the legendary album, renowned playwright Tom Stoppard has written an existential morality tale based on and inspired by themes found on the record. The hour-long play is a deeply philosophical, abstract interpretation of the music, performed like a radio drama.

Tom Stoppard's Daring 'Dark Side Of The Moon' Makeover

Tom Stoppard's Daring 'Dark Side Of The Moon' Makeover 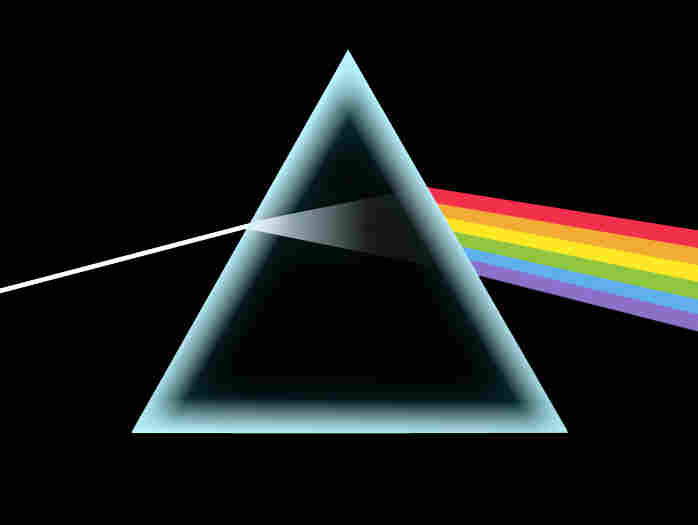 Posters of the iconic prism cover art from Pink Floyd's psychedelic masterpiece The Dark Side Of The Moon still adorn countless college dorm walls, 40 years after its release. Courtesy of the artist hide caption

Few albums hold a place in the hearts and minds of its fans (myself included) quite like Pink Floyd's psychedelic masterpiece The Dark Side Of The Moon. In the four decades since its release, it remains, for many, an almost sacred work of art, endlessly dissected by legions of fans dying to to unravel its myriad mysteries. What are all those background voices really saying? What does its iconic prism cover art mean? Was the album really written as a cryptic soundtrack to The Wizard Of Oz?

Only Pink Floyd's surviving members (principle lyricist for Dark Side and bassist Roger Waters, guitarist David Gilmour and drummer Nick Mason) can truly answer any of these or other questions about the record. But that hasn't stopped others from trying.

The latest and perhaps most surprising attempt comes from renowned playwright Tom Stoppard. To celebrate The Dark Side Of The Moon's 40th anniversary, Stoppard has written a strangely compelling radio drama based on and inspired by the album's multi-layered, existential meditations on fear, madness, greed, and the elusive passage of time. Darkside, as Stoppard calls the play, isn't a musical, with actors performing the songs. It's an abstract interpretation of the music and its possible meanings, dramatized by a small cast of recurring characters, with the album's songs woven throughout the piece as a soundtrack.

The play, which you can hear on the BBC here until Sept. 2, 2013, begins with the infamous heartbeat that opens The Dark Side Of The Moon album. As the increasingly chaotic music builds and swells to a primal scream, we're suddenly taken to the scene of an impending disaster, where a runaway train speeds toward a washed-out bridge. Just before it plunges in the river, a superhero of sorts named Ethics Man appears and diverts the train to another track, saving the lives of everyone on board. But now the speeding locomotive is headed toward a young boy who's standing on the other track. He doesn't see the train coming, and is quickly run down and killed. Without apology, Ethics Man tells a crowd of horrified onlookers he "did what had to be done."

The troubling scenario is just one of several "thought experiments" or imagined moral dilemmas Stoppard introduces throughout the hour-long Darkside. If a plane is going down and there's only one parachute, whom should you save? Is cheating necessary if everyone else is doing it? If a hot air balloon starts to fall, do you toss over the heaviest passenger? Each scenario is tied loosely to messages and themes found on The Dark Side Of The Moon album, some more obvious than others. During the song "Time," for example, two of Stoppard's characters visit a Wise Man on a mountaintop who reveals the secret of life: This is not a drill. Or, in other words, do something meaningful with your life while there's still time, the principle message of Pink Floyd's song.

As the album and Stoppard's play evolve, Ethics Man himself rethinks his worldviews, first as a Utilitarian Consequentialist (the needs of the many outweigh the needs of the few) and then as a Nietzschean Egoist (God is dead and nobody's making the rules), before settling somewhere between what he calls the Kantian "do as you would have everybody do" and the Hobbesian "do unto others before they do unto you."

In the end, Darkside, much like the album that inspired it, raises more questions and conundrums than anyone could ever adequately answer. But both Stoppard and Pink Floyd's Roger Waters seem to conclude that surviving life's myriad woes requires a leap of faith in humanity — to believe in goodness even if no evidence supports it — and that regardless of the moral and ethical dilemma, we're all in this together.

Remarkably, Stoppard manages to pull off what seemed like an impossible challenge: He takes a foundational work of art and, with little to gain in doing so, re-imagines it in a way that remains true to the album's original spirit and intent. The Dark Side Of The Moon has been mercilessly and relentlessly covered, repackaged, performed and re-imagined over the decades, and most of the tributes (such as the "comical" Not So Bright Side Of The Moon by The Squirrels) make die hard fans like me cringe. Admittedly, in Stoppard's play, when Ethics Man first appears, the booming voiceover that accompanies the scene (think Don LaFontaine) made my eyes roll. But the play quickly recovers and becomes more and more curious, thought provoking and engaging with each scene. Stoppard mostly pulls this off by avoiding anything too literal and by leaving his own interpretation, well, open to interpretation. Just as the original album invites multiple listens and considerations, Stoppard's Darkside is worth a deep dive.