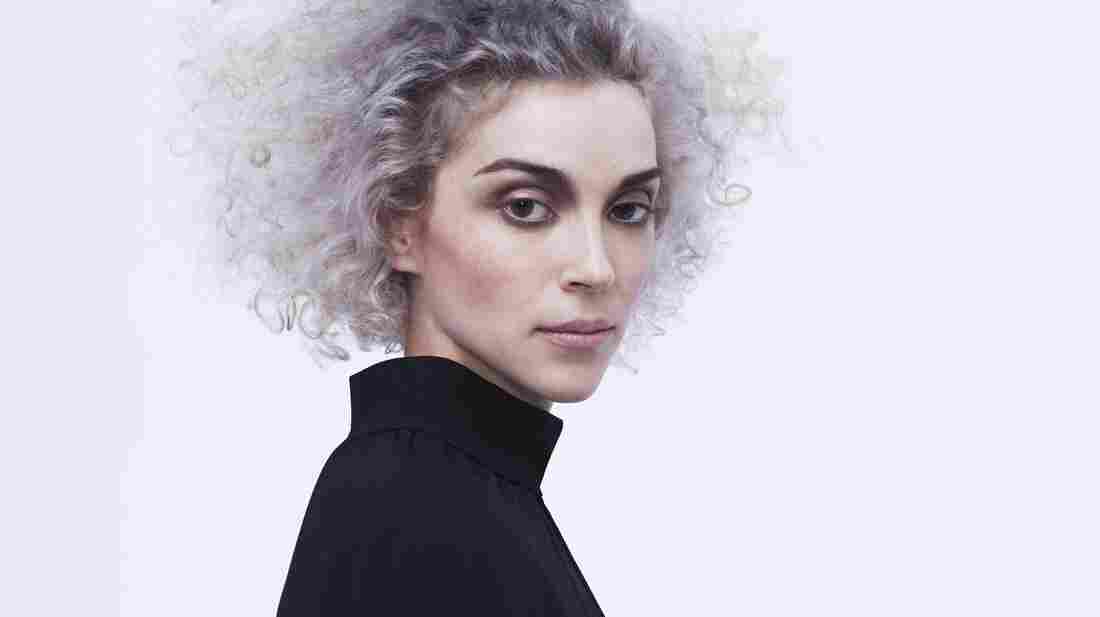 Enlarge this image
Renata Raksha/Courtesy of the artist 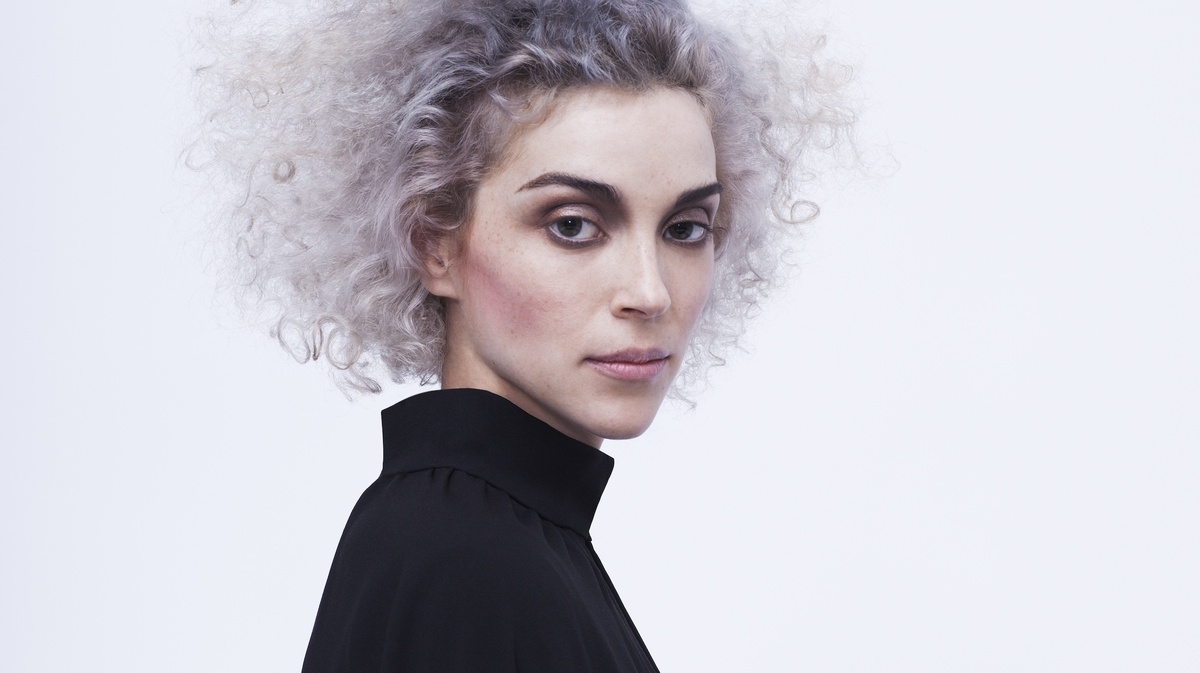 Teased late last year in a series of cryptic status updates, the forthcoming self-titled album from St. Vincent is one of the most anticipated of 2014. In a conversation with All Songs Considered hosts Bob Boilen and Robin Hilton, singer and guitarist Annie Clark gets into the stories behind the new record, due out Feb. 25.

Though her look on the cover suggests an evil overlord, Clark says the songs on St. Vincent were born in vulnerable moments — a chemical-induced hallucination starring a dead civil rights activist, and a standoff with a snake in which she literally couldn't have been more exposed, just to name a few. Read an edited version below, or click the audio link to hear the full interview, including exclusive previews of brand-new music.

BOB BOILEN: You start off this new record, basically, by taking your clothes off and running around the desert. It almost seems like a true story, the way it was written and sung.

ANNIE CLARK: It is, in fact, a true story. It's a song called "Rattlesnake." I was in far, far West Texas, at a friend of mine's cattle ranch, a place that's been in her family for years and years and years. And I was walking around, and I was alone, and I thought that it would elevate the experience to take my clothes off and be one with nature and all these things. Of course, I'm such a city girl that I don't know anything about nature without Google at my fingertips — but I was feeling inspired. So I took my clothes off, and I was having this commune with nature, when, all of a sudden, I heard something. I stopped and I thought, "Okay, maybe that's the wind. Maybe that's just a little squirrel scampering through the brush." And then I heard it again, and it was very distinct: It was a rattle. And I turned my head just slightly, and out of the corner of my eye I saw a rattlesnake. And I just took off running.

BOILEN: Did the making of this record overlap with Love This Giant, the project you did last year with David Byrne?

CLARK: I went and did a year of touring on my last record, Strange Mercy, and that bled right into touring Love This Giant with David. And then I had a little window of time, October to December, and I thought I was going to take that off and just learn how to make soup or whatever — I mean, just be a person. But I did not do that. I got home and I started writing this record about 36 hours after I finished a year of touring.

CLARK: No, never! I just can't think of anything better to do. ... Being on tour is sort of like being in the midst of a tornado, and then all of a sudden you're dropped down and everything is sort of askew in pieces around you. I mean, I love it. I don't mean to paint it like it's a bad thing; it's not at all. But I think, actually, the healthiest thing for me to do was to try to process the past year and a half's worth of experiences. I'd been collecting ideas, and had melodies that I woke up singing in dreams. I had all this stuff that really wanted to finally have a chance to get down on paper.

ROBIN HILTON: When I listen to your records — and this is a good thing — I have a hard time distinguishing the sounds. You know, I don't know if I'm hearing a guitar or a synth. And I think of you as such a fantastic guitarist. Is that a line that you're intentionally blurring when you play?

CLARK: I love playing guitar, and I've been playing it for more of my life than not — but I'm not as interested in kind of recreating the old lexicon of rock guitar. It's great, and it's an amazing history, but I'm interested in what else a guitar can sound like. And I think that's the general vibe on this record. It's all organic sounds; it's all people playing in a room for the most part, especially the rhythm section. But the sounds get processed to the point where they sound inorganic, so you get kind of the best of both worlds: You get the feel of a human, but the sound of a machine.

BOILEN: It's funny you mention the lexicon of rock 'n' roll. I think about the average 18 to 20-year-old listening to music now, and so little of it is guitar-driven music. So much of it is layers and textures of all sorts of sounds that have no point of origin.

CLARK: Yeah, I think that most of the music that people listen to today is probably not the product of three people in a room, "just feelin' it" in a rock way. It's more about creating worlds. A lot of it's being made on the computer; I would venture to say that 99 percent of it is. ... And I think we're in a world where people feel like they can beg, borrow and steal from any genre and it's fair game, and that's exciting. You don't want to get stuck in any one thing.

HILTON: You have a cut on the new record called "Huey Newton." Tell us about that.

CLARK: I was traveling so much last year on tour, and I was prescribed Ambien, which is a sleeping drug, just to help get over jetlag. So I was in a hotel room in Helsinki, and I took a whole Ambien. What happens if you take Ambien and you go to bed is that you sleep like a baby. But if you take it and for some reason can't fall asleep, you just trip — I mean, you straight-up hallucinate. So I was in this hotel room, and I hallucinated that Huey Newton was there with me. And we really bonded; we kind of had a heart-to-heart.

BOILEN: When you're in this thing, when you're having this dream-state conversation with this political activist from the '60s who's now long gone, do you think, "This is a song"? Where's the connection between the event and starting to work on a record?

CLARK: I wrote the words to this song in probably five minutes, in a very feverish sort of state. And it's so stream-of-consciousness. You know when you're online and you go, "I really need to look up the Irish potato famine." And then, next thing you know, you make a pit stop at the Black Plague. And then you're like, "Oh wait, what is Kate Middleton wearing?" And then you're like, "Oh! Huey Newton." It was sort of meant to feel like that.

BOILEN: Describe the cover art for us.

CLARK: The theme is "near-future cult leader." I'm wearing this metallic dress, and my hair, I look like I stuck my finger in a light socket. ... The throne that I'm sitting on is inspired by the Memphis design movement, which is very much about elemental shapes. The other inspiration was Jodorowsky's The Holy Mountain, which is a movie from the '70s that features all this really intense, bizarro imagery.

HILTON: Do you have a favorite song on the new record?

CLARK: I have a lot of favorites, but I'm a fan of the song "Birth in Reverse" for a few reasons — one of which is that it totally reminds me of a B-52's song, and I wish that I could get Fred Schneider from The B-52's to do his version of it. Fred Schneider, if you're listening, I need a remix.