Accessibility links
Come Make Some Noise With Us In Brooklyn On June 21st! : All Songs Considered We're inviting brass players, percussionists and the public to come play in a world premiere written by Red Baraat's Sunny Jain at the Brooklyn Public Library, as part of Make Music New York 2014.

Come Make Some Noise With Us In Brooklyn On June 21st!

Come Make Some Noise With Us In Brooklyn On June 21st! 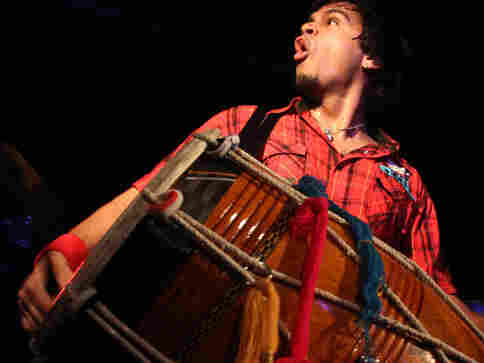 Composer and drummer Sunny Jain, the founder of Red Baraat, is writing 100 BPM as a commission from NPR Music. Wills Glasspiegal/Courtesy of the artist hide caption 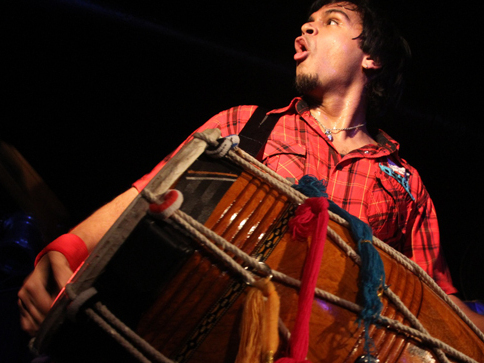 Composer and drummer Sunny Jain, the founder of Red Baraat, is writing 100 BPM as a commission from NPR Music.

Wills Glasspiegal/Courtesy of the artist

We've brought the stillness of Philip Glass to the heart of bustling Times Square. We've made the Manhattan Bridge literally roar. And for this year's edition of Make Music New York — a one-day festival that transforms the city into a movable feast of music on every summer solstice — NPR Music has commissioned a new song that will transform the iconic steps of the Brooklyn Public Library into a raucous street party. Even better: We want you to come play with us.

We've asked Sunny Jain, the inventive drummer, composer and founder of one of our very favorite celebration-minded bands, Red Baraat, to create a new work called 100+ BPM that we'll premiere on the iconic steps of the Brooklyn Public Library at Grand Army Plaza. Jain will lead New York-based professional musicians and amateur performers in the world premiere of 100+ BPM, on Saturday, June 21 starting at 4:30PM ET.

As Jain notes, the name 100+ BPM is meant to reflect its joyous mission. "The title, he says, "carries a double entendre of tempo for the piece, beat per minute, and community building through music: Brooklyn Public Music."

One of Make Music New York 2014's marquee events, 100+ BPM promises to reflect the dynamism, creativity and diversity of Brooklyn itself, just as Red Baraat merges the sounds of north Indian bhangra with jazz, go-go, funk and hip-hop. Jain's scalable composition will allow for moments of "scripted improvisation" and audience participation.

If you're a brass player or percussionist — amateur, student or professional — and you'd like to take part in the premiere of 100+ BPM, you should arrive at the steps of the Brooklyn Public Library (10 Grand Army Plaza, Brooklyn, NY 11201) familiar with the piece, warmed up and ready to play by 4:30PM ET. Next week, on May 21st, we'll be posting the PDF of the 100+ BPM score here at NPR Music as well as on the websites of Make Music NY, Brooklyn Public Library and Red Baraat. The collective performance will be documented for a video that will be premiered later this summer as part of our Field Recordings series.

To warm you up for a hot summer's groove, check out the Tiny Desk Concert by Red Baraat. As Bob Boilen wrote, "They're the best party band I've seen in years ... If the drum is the messenger, the brass is the message. Uplifting melodies emanate from baritone and soprano saxophones, bass trumpet, trombone and sousaphone. This is a band that jazz lovers can appreciate and rock fans can dance to. ... Of all the concerts that have come to my desk, this seemed to be the little-known band that won over the most hearts."