Accessibility links
Why Do Band Photos Look Like That, Anyway? : All Songs Considered Folk-rock bands posing on hay bales. Metal bands in alleys with burning trash cans. Why are there so many tropes in press shots — and what are some of the secrets to getting them right?

The Good Listener: Why Do Band Photos Look Like That, Anyway?

The Good Listener: Why Do Band Photos Look Like That, Anyway?

We get a lot of mail at NPR Music, and alongside the Archer paraphernalia we bought at Comic-Con and shipped to ourselves is a slew of smart questions about how music fits into our lives — and, this week, thoughts on musicians' publicity photos.

Erin Briskie writes via email: "While traveling abroad recently with friends, our typical group photos in front of iconic landscapes slowly transitioned into a group of seven non-musicians attempting to take fake, ironic 'band photos.' Because everyone does that, right? Which got me wondering: When you Google the phrase 'band photos,' it's hard not to come across (regardless of genre) a bunch of people melancholically looking in various directions, not hard at work, and in an abandoned location. Can you help classify what makes a good 'band photo,' and is it possible to judge a band by its picture?

"The common trends I have found: Folk-rock band photos typically contain cow pastures, exposed brick and/or cobblestones and rolled-up, well-fit jeans. Just like a heavy rock band's photo commonly contains some combination of corrugated metal, sawdust, sweat and fire. Who set the trends for this in the first place?" 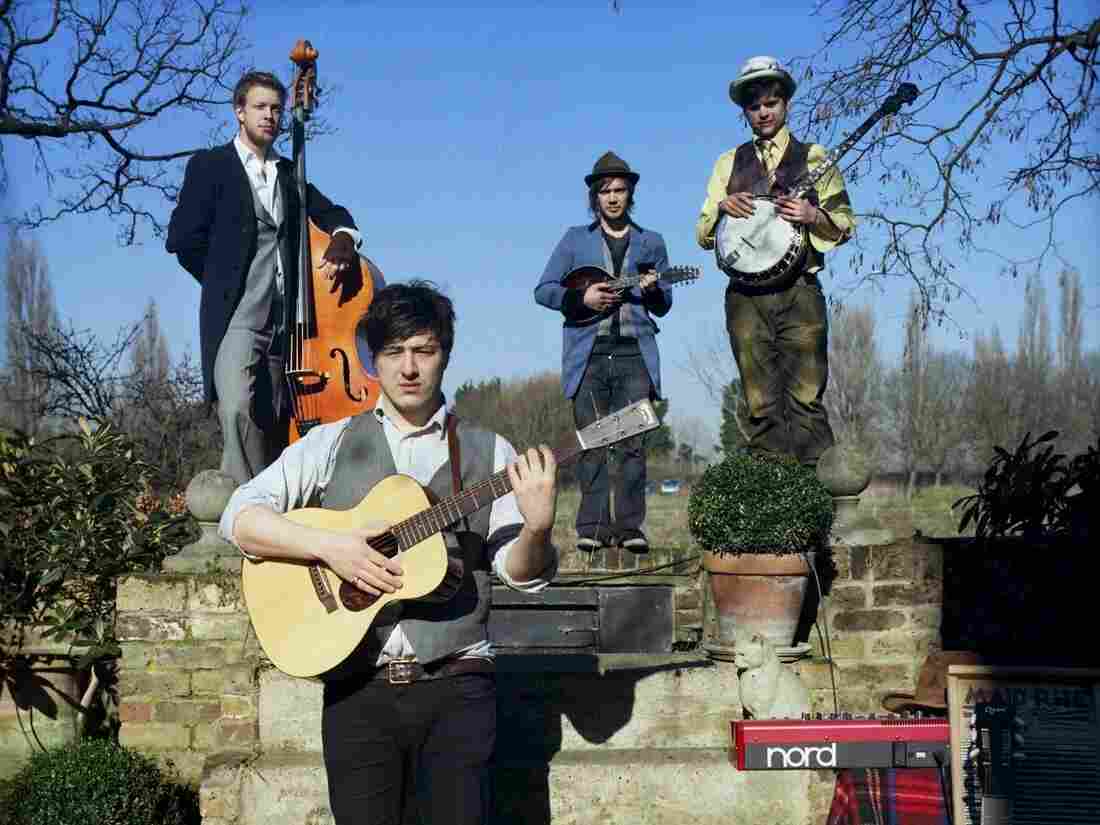 Banjo! Exposed brick! Open sky! Still, Mumford and Sons, you could use some hay bales... Courtesy of the artist hide caption 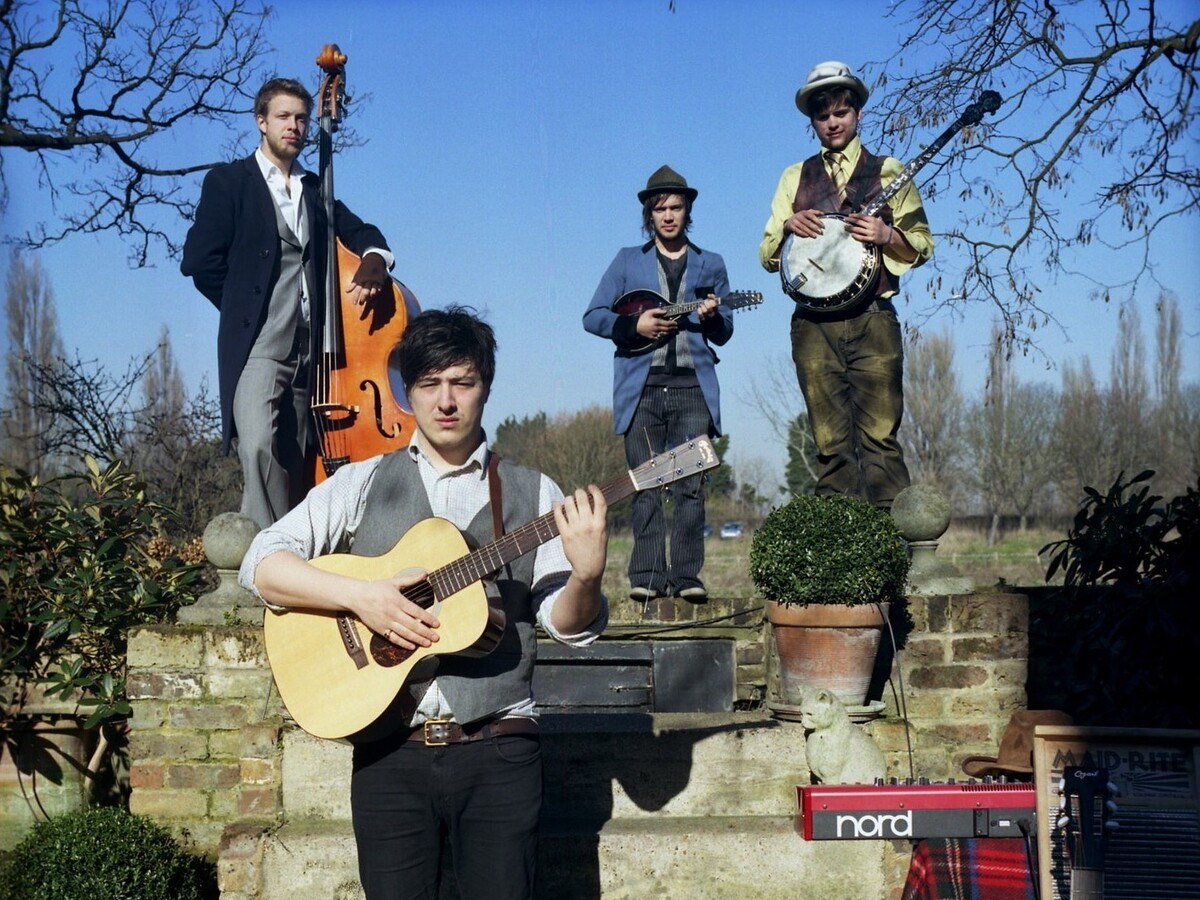 Banjo! Exposed brick! Open sky! Still, Mumford and Sons, you could use some hay bales...

The first thing to keep in mind about band photos is the utilitarian purpose they serve: They're conceived and designed largely so that people like me can slap down an image around which to wrap text. In many ways, they function as the visual equivalent of the press releases they often accompany — and, like press releases, you can be artful with them. If you're too artful, though, they serve almost no purpose at all.

In band photos, as in book covers, you're dealing with two powerful and often opposing forces: You want to look like no one and nothing else, while at the same time setting a tone for what people can expect from the work itself. This is an incredibly tricky assignment, which means that much of what you see focuses on the latter. A band's management may ask for "blazingly original, while also signifying that fans of Mumford and Sons would like it," and in the end, you're still likely to wind up with, well, exactly what you'd expect. After all, if your band has banjos and mustaches and whatnot, which setting will make more sense: hay bales and open skies, or an alley full of burning trash cans? For most bands, there's a time and a place to confound expectations, and press photos aren't generally the ideal opportunity to do so.

There's also a larger sense of reluctance at work. Band photos, like many of the dreariest promotional obligations musicians face, often feel like exercises in inauthenticity — and are thus widely regarded as something to be either endured quickly or subverted outright. Consequently, you get a lot of photo shoots in which bands do as they're instructed (stand there, look natural, you gaze off in the distance, you sit on that hay bale, and so on) until it's time to goof around and do something that seems wild and subversive in comparison. Those wild and subversive photos are then discarded by the label and management, who are more conservative by nature and know which kinds of photos actually get published.

Speaking of which, a quick guide to how to do press photos right (and wrong), coming from someone who's been dealing with the fool things for the past 20-plus years. Hire a professional. If you really can't afford a professional, find a way to come up with something that doesn't look as if it's been shot with a disposable wedding camera in low light. Make sure at least one of your primary photos is configured in such a way that all band members occupy a squarish space, surrounded by areas that can be cropped out. Remember that what looks arty and weird for you might look like a production error in a newspaper or on a website. For heaven's sake, don't configure everyone in a two-inch by eight-inch strip because you think it looks cool. (Many sites employ content management systems that force the use of standard crops.)

Band photos are, to come right down to it, obligatory for everyone involved: for the publications that run them, for the bands and managers and labels that circulate them, and for the photographers who'd rather shoot something that moves. Nothing squelches creativity quite like reluctantly executed promotional obligations with many masters to please. I'm not saying there aren't cool publicity photos in the world — and there are most definitely photographers who shoot a lot of great stuff. In a lot of the most optimistic scenarios, though, at least the music's interesting.