Accessibility links
Songs We Love: Lead Belly, 'I'm So Glad, I Done Got Over' : All Songs Considered The Smithsonian opens its archives and shares a comprehensive collection of previously unheard recordings by blues legend Lead Belly.

Songs We Love: Lead Belly, 'I'm So Glad, I Done Got Over' 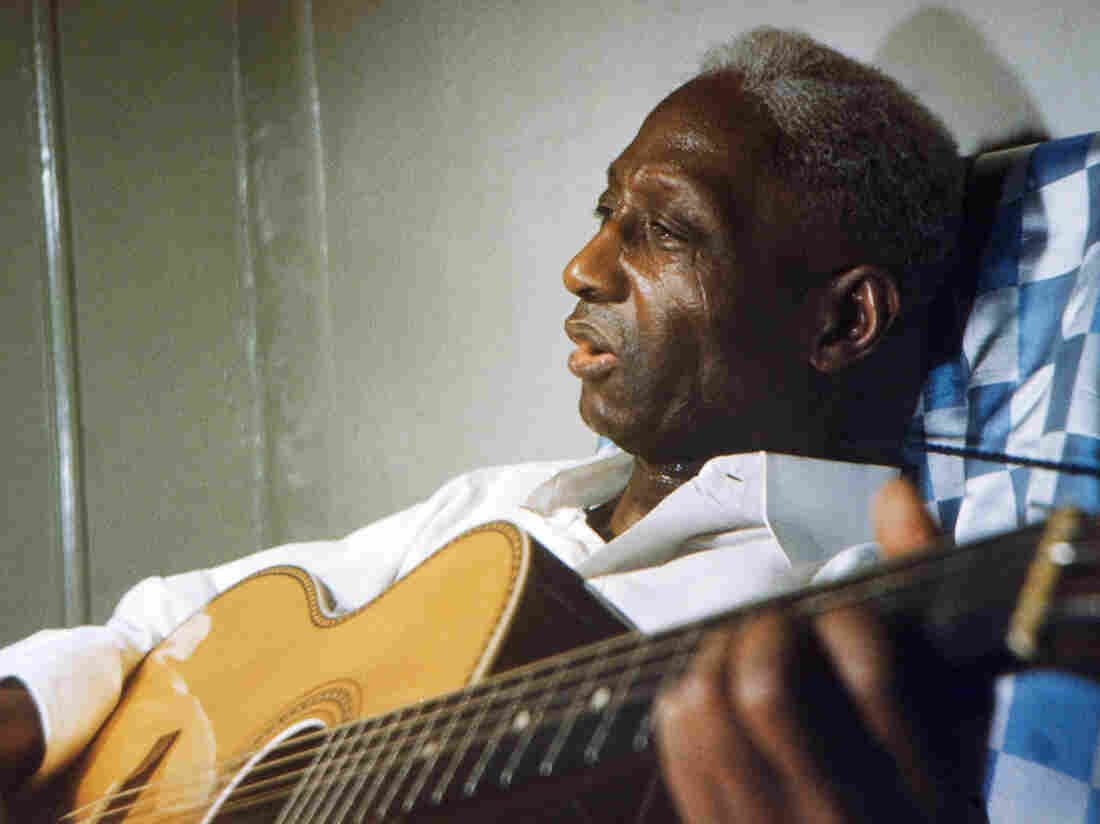 In the new, comprehensive boxed set Lead Belly: The Smithsonian Folkways Collection, to be released in Feb. 24, 2015, the Smithsonian archivist Jeff Place reminds readers of the huge historical chunk of American music that the legendary singer and songwriter carried forward via his 12-string Stella guitar. "Lead Belly is often spoken of as the 'discovery' of folklorists, but in many ways he was a walking and singing collector of American folk songs in his own right," Place writes.

The treasure Lead Belly transported came from all over the African-American landscape: prison chants, field hollers, murder ballads, sentimental parlor songs, broadside ballads, telling the stories of the day. Sacred music was a major aspect of Lead Belly's repertoire, too, and to hear these spirituals and hymns rendered in his clear, muscular voice is to remember how central faith has been in people's day-to-day survival, beyond the walls of any church.

This recording of the gospel music staple "I'm So Glad, I Done Got Over" comes from the sessions Lead Belly recorded with Folkways founder Moses Asch in the early 1940s. The song itself probably originated among Southern slaves; versions are mentioned in mid-19th century accounts of plantation life. By the time of Lead Belly's version, the song had become an open text: Gospel singers were transforming it into versions like "How I Got Over," which would become one of Aretha Franklin's signatures, and in the new worlds of blues and R&B, artists were applying its message of survival through grace to secular matters. You can hear the phrase in later hits by Guitar Slim and Irma Thomas. "I'm So Glad, I Done Got Over" is that kind of American classic, flexible enough to accommodate messages suiting both heaven and earth.

Lead Belly's version, which has been available in the Smithsonian archives but was unreleased until now, hits the perfect middle between the sacred and the profoundly danceable. He picks out a syncopated rhythm on his guitar and offers his testimony in a jaunty tone. The souls in his story belong to regular people, changed by the power of belief. "I'm so glad," he utters at one point, sounding preternaturally pleased. The glee in his voice isn't different than what he feels toward the women he admires in his love songs, or the children he delights in when singing old nursery rhymes. All love is good love.

This is a powerful time to hear Lead Belly's voice again. His story is one of the most complex in popular music, and his influence is often obscured by his legend. This boxed set promises to open up his legacy again by foregrounding the clarity and richness of his own performances. His was the art of keeping stories alive. We need those stories now.