Accessibility links
For Luxury's Return, It Took A Lifetime And A Priest : All Songs Considered Many bands take extended breaks to pursue other projects or raise families. Luxury is no different, except that three of its members became Orthodox priests.

You Must Change Your Life 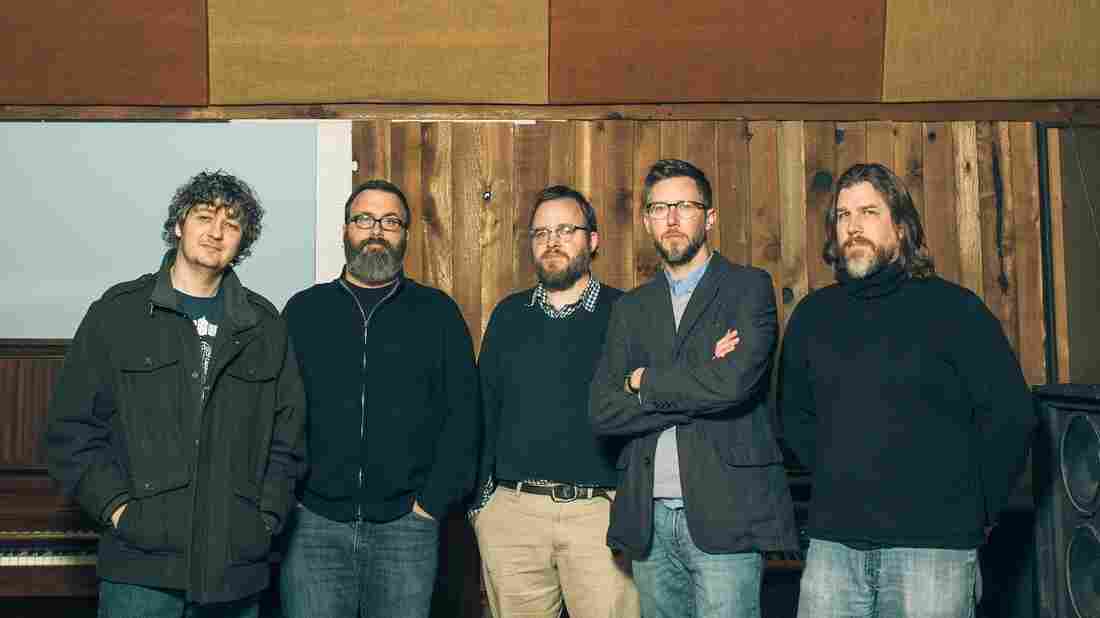 "Somehow, almost mysteriously, that rock band is a part of what it means for the three of us to be priests," says Jamey Bozeman (pictured right). Jared Swafford/Courtesy of the artist hide caption 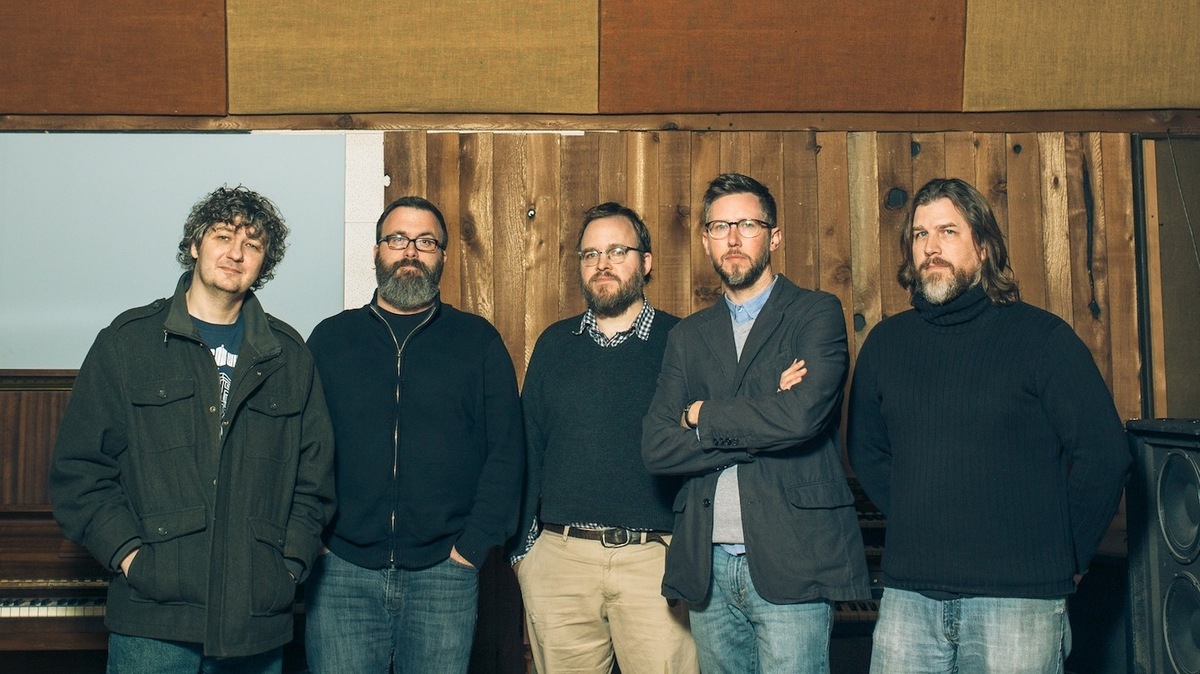 "Somehow, almost mysteriously, that rock band is a part of what it means for the three of us to be priests," says Jamey Bozeman (pictured right).

Jared Swafford/Courtesy of the artist

Baby-faced and rail-thin, Lee Bozeman didn't look like the kind of guy who would ram a microphone stand into the floor. But in the '90s, when Luxury got to "Flaming Youth Flames On" in its set list, the guitar came off and the sweetly gut-punching crooner flailed his body into the ultra-sassy punk song that teased, "Make you gasp / Make your heart skip a beat." It was an eye-opener to any teenager who witnessed it, especially since Luxury's spectacle was most often seen in church youth halls.

During the heyday of 120 Minutes-friendly alt-rock, these were two brothers and college friends who dug into Dischord punk, and clung to their records by The Cure and The Smiths for dear life. That aesthetic thrives now with bands like Title Fight and Weekend, but in the midst of what Seattle wrought, it was unheard of. They were also outsiders to the growing Atlanta and Athens scenes, living an hour away in Toccoa, Ga. In 1995, Luxury signed to Tooth & Nail Records, a Christian label then known more for punk and hardcore than Flannery O'Connor-referencing Anglophiles from the South. But as author Joel Heng Hartse succinctly put it, "Tooth & Nail put out effortlessly cool records for effortlessly uncool evangelical kids," an important function for youth-group outcasts who couldn't connect to the Amy Grants of the world, much less anything else.

In the 20 years since Amazing & Thank You, Luxury has come up against a horrific tour-van wreck, released a few albums, broken up, sort of reunited, raised families, pursued several musical projects, and gone on another long hiatus. Now Luxury returns with its fifth and most fully realized album, Trophies. It's gorgeous and feral, just like Luxury's greatest, but with an insight that's lived in, awake with epiphanies. It's there that we find the razor-sharp "You Must Change Your Life."

With Luxury's members now scattered across the U.S., Trophies was recorded in Atlanta after a successful crowd-funding campaign in 2014 — which, after so much time away, says a lot about Luxury's cult following. It comes 10 years after its fourth album, Health & Sport, which is no big deal; many bands take extended breaks. Luxury's no different, except that three of its members — brothers Lee and Jamey Bozeman (guitars, vocals) and Chris Foley (bass) —became Orthodox priests. That's partly the subject of a new documentary's crowd-funding effort, Biography/Autobiography: A Story Of A Band Called Luxury. The band's "fifth leg" and third guitarist Matt Hinton — who also directed Awake, My Soul about the Sacred Harp singing tradition — not only focuses on those 10 years, but also the 1995 tour van wreck that forever changed the band.

In the midst of Holy Week — "an intense time spiritually as well as practically for us" — the brothers (and Fathers) Bozeman spoke about how the band functions 20 years later, as well as what their parishioners think about their "band life."

When first listening to Trophies, I thought, "Wow, this is a classic Luxury record." It reminds me of Amazing & Thank You, balancing bouncy rock songs with crooning ballads, but sounds richer and more aware of its presentation. What have the last twentysomething on-and-off years as a band taught you about the core of Luxury? And what has changed?

Jamey Bozeman: There really does seem to be some sort of direct connection between Amazing & Thank You and Trophies. It's not like we intended to draw from our past in order to write this record, but in some way it does hearken back to A&TY more than to our other albums.

In 20 years, we really haven't changed very much as a band, when push comes to shove. We are all older and have a lot of experience under our belts. Our individual musical tastes differ pretty wildly from each other's these days. But we tend to interact as we always have when it comes to writing and playing together (though with a little more maturity and a little less youthful angst). That might be because we live such separate lives now, and we are forced to draw on the past to a great degree in order to have a workable reference point out of which to create these songs. I use the term "create" pretty loosely, since Lee is the main "creator" of songs, and the rest of us work to dismantle them in a creative fashion. That's pretty much how we have always done things. Working as a band isn't easy, and the only thing that really sustains Luxury and keeps it from falling apart is the fact that we are actually friends first and bandmates second.

Lee Bozeman: The last 20 on-off years have taught me that it takes that long to basically discover who you always were, and [that] you should just stick to what you do. Trophies was meant to simply be a record of what Luxury does, rather than what we could do.

While Luxury ran in and out of Christian-based rock circles in the '90s, did you ever suspect that three of you would become Orthodox priests? Do your parishioners know about your "other life"? How do they respond to it?

Jamey Bozeman: To really answer this adequately would take up more space (and time) than you have here. The short answer to whether I thought that the three of us would end up as priests is, "Not a chance." Perhaps Lee or Chris would do this, but certainly not me. I didn't convert to Orthodox Christianity until we had all moved to different places around the country, meaning that Luxury was taking a backseat in our lives collectively.

I had another band that was my main gig at the time of my conversion. Up until that time, I was determined to stick with "rock 'n' roll success" as a career goal. But as reality set in and my desire to achieve that goal began to fade, I gradually felt drawn to service in the Orthodox Church, which was an enormous surprise to me. Like I said, it's a long story, and it is more complex than simply having a religious feeling or being interested in wearing vestments or seminary training.

I've been very open with my parishioners about my "band life." Partly because I don't want them to find out from some other source, and partly because it is a real part of who I am as a person and as a priest. They tend to think that it's cool that their priest is "in a band" (a phrase that makes me laugh at this point in life), but I think that it's more important that they have a share in how I live my life since I am their priest. I have a responsibility to them that transcends my own personal decisions to some degree, so they ought to know that these sorts of things are a part of my life and of who I am.

It's probably important to know that in Orthodox Christian worship, there is no use of instrumentation. There are no guitars or drums or "praise bands," and the manner of our worship is not something that each priest or church group develops along lines of taste or preference. There is simply what we would call a "received tradition" of faith, worship and doctrine. So it's not as if we can somehow combine our musical talents as members of a rock band with our priestly activities. But somehow, almost mysteriously, that rock band is a part of what it means for the three of us to be priests.

Lee Bozeman: Who ever expects what they will be when they "grow up"? I don't really find it that surprising that three of us ended up as priests. It is more surprising that more people don't. Anyone who takes their faith seriously (at least for men within the Orthodox tradition) has to consider the possibility of ordination at some point.

Jamey Bozeman: 1987 was a remarkable year, musically speaking, especially considering the fact that it was the year that The Smiths broke up.

I can't answer your question directly, but there is this: I haven't confirmed this with Lee, but I think he stole the "1987" thing from me. Champion Leader is something that I do on my own when I can scrape together some free time to write. I released 1987 while Trophies was in the middle of being recorded and before I read his lyrics for "You Must Change Your Life," so maybe there was something subliminal going on there. Or maybe it's just that we seem to think along the same wavelength sometimes.

Lee Bozeman: There is no significance to the date 1987, but it does set the song firmly in my youth. And it happens to be when Strangeways, Here We Come was released.

"You Must Change Your Life" is also the most lyrically pointed song I've heard from Luxury — "you" is not a word that Lee typically uses, at least at the listener. The directive is even echoed later in "Words Of Mouth." Who is this song for?

In the poem, Rilke is considering the fragment of Apollo's statue with its lines and movement, its missing parts. He is considering what it might have been and it leads him to the conclusion that he must do something — he must change.

In my song, I am considering the parts that constitute my life, the fragments, the beautiful and the ugly, and come to the same conclusion. Of course, for a priest, you must always change your life. And if it's true for a priest, then it must be true for anyone.

"It takes a lifetime and a priest," in particular, feels more autobiographical, but is it one of Lee's red herrings?

Lee Bozeman: This is no red herring. If you want to succeed in living, you must have a lifetime and a priest.

Trophies will be out in the late spring or early summer.