Accessibility links
506 Shows In 365 Days: Bob Boilen's 2015 In Concerts : All Songs Considered In 2015, Bob Boilen actually stayed home a few times, but he still had more than 500 shows from which to pick his top 10 concerts of the year. 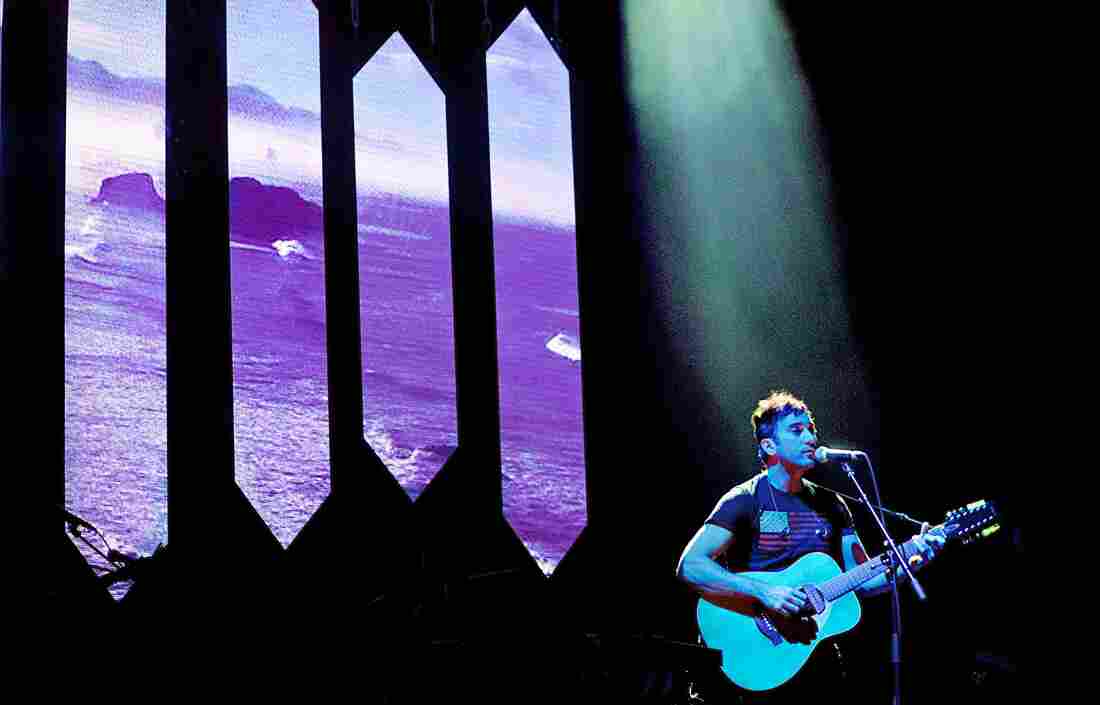 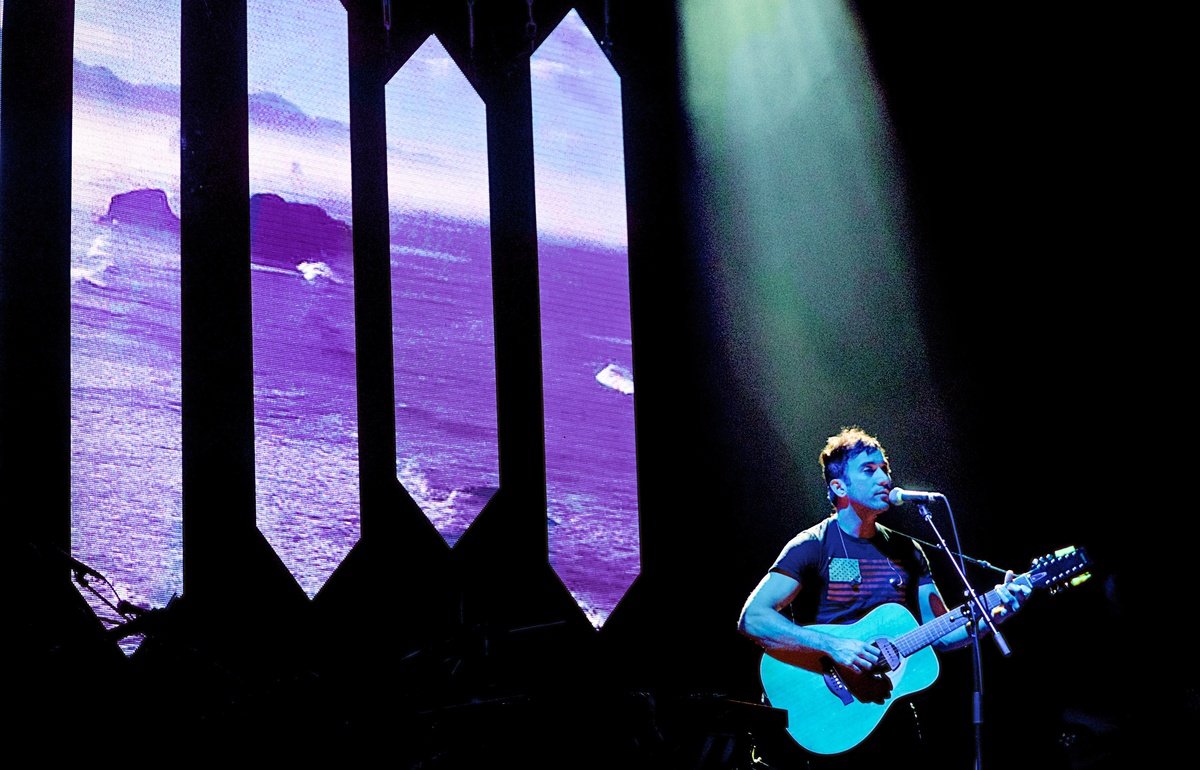 In Bob Boilen's favorite concert of 2015, Sufjan Stevens turned Washington, D.C.'s Constitution Hall into a place of self-discovery and magic.

So more than 100 times this year I opted to sit on my couch and write instead of running out to one of my fave D.C. concert hot spots. I love the participatory nature of concerts. There's something about screaming approval at a show that makes it an active and communal form of entertainment. I don't get that from movies and TV shows — in fact, I never made it to the theater in 2015 and Portlandia was the only series of which I can say I watched every episode. On the other hand, I did see 59 bands play at the 9:30 Club and 31 bands play at DC9, and also plenty of shows at the Black Cat, Comet Ping Pong, The Hamilton, The Lincoln Theater, Sixth and I Synagogue and Rock & Roll Hotel. D.C. is a good town for music. Venues care about the performers and the fans are the best of any city I've been to. It was a good year to be in a club. And though I prefer intimate spaces, two of my favorite shows — Glen Hansard and Sufjan Stevens — were both at one of my least favorite venues, DAR Constitution Hall. I also went to my first Phish show and grew a beard (not necessarily in that order).

Below is a list of my top 10 shows, starting with the best concert I saw all year. Following that is handful of bonuses and a list of every concert I saw in 2015 (I count each band as a show or performance) in chronological order. All 506 of them. Dear bands: If I missed you last year, I'll try to do better in 2016.

I watched Robin Hilton weep and had a few tears of my own, in a space more hollow than holy. But Sufjan Stevens sung his songs of abandonment and forgiveness with visuals that were simple and symbolic. He turned Constitution Hall into a place of self-discovery and magic, with large screens resembling church windows and projections of oceans, landscapes and home movies. It all made for a pensive, reflective backdrop for his songs from Carrie and Lowell.

My first encounter with Kate Tempest was at SXSW 2015. I hadn't paid attention to her brilliant 2014 album Everybody Down. The British hip-hop poet and playwright is a master communicator. She's able to sing and tell tales to a crowd and all the while, I felt her speaking directly to me. And her message was full of passion and love. One of the lines she repeated over and over to everybody, as she looked around the room, was, "More empathy, less greed." Live in the moment is her message, a pungent one in a distractible world.

I've seen Courtney Barnett at least seven times in the past two years, and each time she and her band shine brighter and the songs get better. This year she debuted her first full length album at NPR Music's SXSW showcase. Later, on two consecutive nights at the 9:30 Club, she played some of the finest rock and roll I've seen on a stage. Hers is music that's thoughtful and unfastened at the same time; it engages my brain with words and sets my body free with beats and a guitar barrage.

I love the heart that Glen puts into his performance, but frankly, knowing that he was to perform at Constitution Hall, which seats around 3,700 people, I figured it'd be a fine show but not a deeply moving experience. I was so, so wrong. At first I attributed my response to the fact that my seats were relatively close to the stage, but the more I looked around and saw the crowd, the more I knew that this show was transcendent. From a cappella songs performed sans microphone to a big and exceptional nine-piece band behind him, Glen created a tavern out of a hall. The stories flowed — confessional at times — through twenty-three songs and an encore that had him singing among the standing crowd with just a beat-up Takamine guitar (once again without a mic). When he brought out the legendary Richard Thompson, the evening's opener, and they proceeded to perform Sandy Denny's "Who Knows Where the Time Goes," I cried.

I saw Mackenzie Scott, a.k.a. Torres, at four venues not including my desk in 2015. And though the church show at SXSW was a perfect way to end a night, it was her show in the backyard of an Austin sports bar on a rainy afternoon that packed the punch. She was fierce, tossing a middle finger into the air while singing and sternly strumming, her voice a rasp as she sang the words to "Strange Hellos": "I was all for being real, but if I don't believe then no one will. What's mine isn't really yours, but I hope you find what you're looking for." I wouldn't want to be the subject of that tale but thrilled to receive the wrath and brutal honesty from the music it inspired.

Someone recently asked me if I get bored or jaded going out and hearing music five or so times a week. Then I think of walking into a club like DC9 to hear a band I know nothing about and walking out wearing a massive smile and sprinkled with a bit of glitter (or maybe, in this case, GLTTR). Bands like PWR BTTM are why I love to go to shows: seeing musicians fiercely in love with what they do. PWR BTTM is a queer duo from NYC with a penchant to perform and sing about boys or the lack thereof. They're punk insofar as they're loud, though they're not angry. Guitarist Ben Hopkins and drummer Liv Bruce (who swap roles at times) are funny and lovable. Most importantly, they are a big wonderful surprise and in a single 30-odd minute set, they brought a group of strangers in a club together for something unforgettable. It's the reason I go out.

This comeback was triumphant because it wasn't nostalgic. Sleater-Kinney came armed with new muscular songs, played to an audience at the 9:30 Club that included some who may have witnessed one of the band's final shows at the same club in the summer of 2006 but also some eighteen year olds who were likely in fourth grade back then. The band felt vital: Corin Tucker sang like only Corin can sing, Carrie Brownstein owned the stage and Janet Weiss propelled her best friends forward with might and finesse. It was a thrilling sight and a feast for the ears.

Another case of knowing next to nothing and experiencing talent and joy. The Suffers are a soulful ten-piece band punctuated by brilliant horns and led by an undeniable singer and full-on presence, Kam Franklin. Their Houston, Texas sound mixes R&B with Cajun, country and more. It's old school and new. They've still not put out their debut album, that will come very soon and I'm sure this will be the year you'll experience Gulf Coast Soul.

Remember that overwhelming sadness when a good relationship came to a painful end? Imagine being able to express those feelings to a friend or acquaintance so they feel connected to your feelings to the point of tears. Björk did that to me with song and sound at Carnegie Hall earlier this year. Armed with electronics by Arca, who worked with Björk to produce the heart-wrenching songs from Vulnicura, percussionist Manu Delago and a fifteen-piece string ensemble called Alarm Will Sound, she told the tale of her relationship's demise. We've all heard a thousand songs of heartbreak, but nothing as touching as these.

10. DakhaBrakha
Sixth and I Synagogue in Washington, D.C. (April 2)

When I look geographically at the music I love, it tends to be based either on the East Coast, the south, the U.K. and Iceland. Geography is something that defines the sound of music and when I hear the Ukranian music of DakhaBrakha and hear their out-of-this-world harmonies and rhythms, I'm reminded how narrow the avenues of creation can be. DakhaBrakha simply touched my heart deeply when I heard them at GlobalFEST in 2014 and the group's U.S. return, at the Sixth and I Synagogue this year, conjured emotions of longing and uncertainty with songs sung in a language I don't understand but in ways music can universally convey. You can watch them play my desk or keep an eye for their 2016 return.

There was plenty more live music worth highlighting — too much, in fact. Below, you'll find the complete list of 506 sets I saw in 2015, but before that, here are a few more bands worth mentioning that didn't make my top 10:

One of the exciting things about seeing music nearly every night is discovering new bands. I was inspired to bring many of my favorite discoveries to the Tiny Desk (NPR Music hosted 84 Tiny Desk Concerts during 2015, but I didn't count any of those in my concert tally). Kate Tempest, The Suffers, Christopher Paul Stelling, The Wild Reeds, Shakey Graves, Oh Pep!, Girlpool, And The Kids, Land Lines, Car Seat Headrest, SOAK, Nathaniel Rateliff and the Night Sweats and Wolf Alice are some that come to mind. There were groups who put their blood and beauty on display: The Golden Dawn Arkestra reminded me of Sun Ra; Mucca Pazza was a carnival of fun complete with cheerleaders; Thunderbitch had a leather-clad Brittany Howard of the Alabama Shakes entering the stage on a motorcycle and Downtown Boys set the crowd reeling with frenetic fervor, as did Diet Cig and my personal favorite, D.C.'s own Priests. Tanya Tagaq, an Inuk throat singer, was cathartic and orgasmic while Miya Folick was simply transcendent. And it was good to see old favorites get even better: alt-J on a big big stage, Laura Marling at Newport, The Punch Brothers at the 9:30 Club and the grumpy and adorable Stephin Merritt in a synagogue. If you're at a show in 2016 and see a guy in a Fedora style hat with a huge grin, come say hi and share a moment.