Accessibility links
Quilt Explains Its New Album, 'Plaza,' Track By Track : All Songs Considered The third album from the quartet is winsome, wandering, electric folk. Listen to every song on the album and read the band's comments on how it came together. 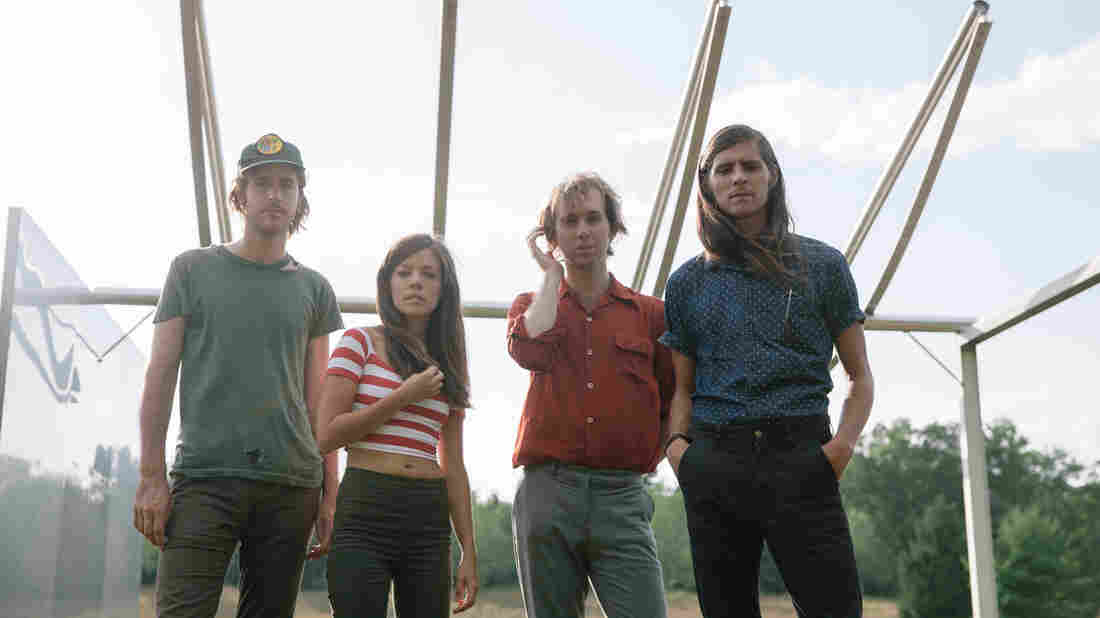 Enlarge this image
Daniel Dorsa/Courtesy of the artist 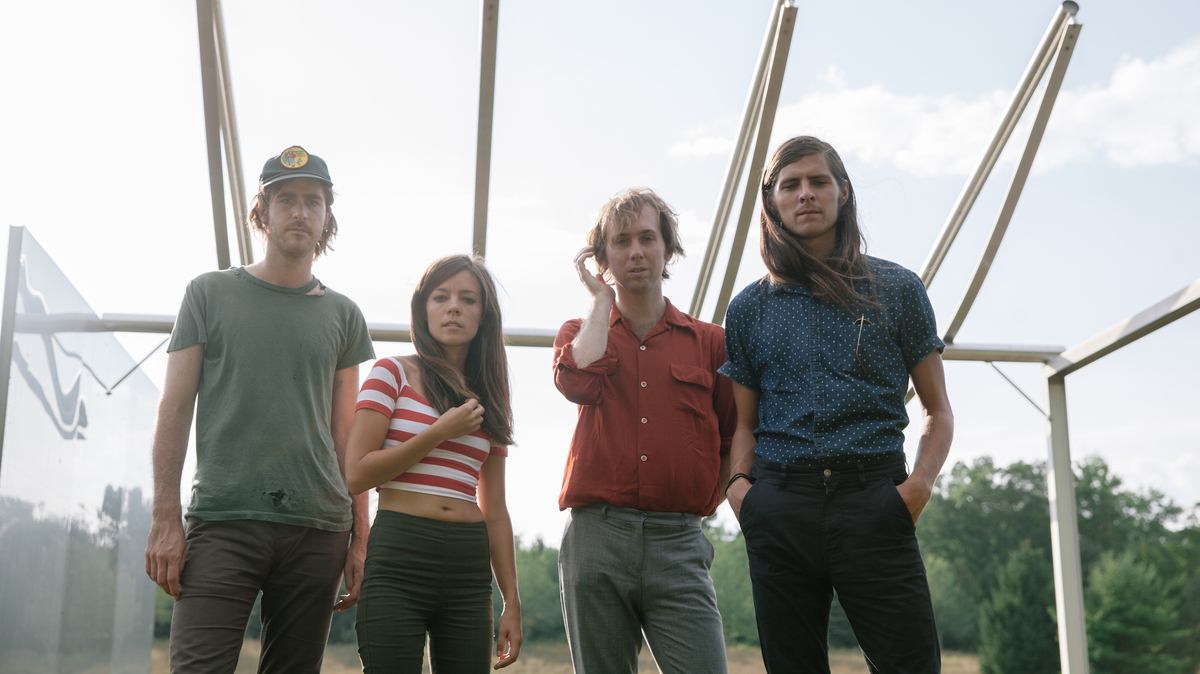 Daniel Dorsa/Courtesy of the artist The cover image for Quilt's Plaza is an untitled painting by Ken Price courtesy of the The Judith Rothschild Foundation Contemporary Drawings Collection. Courtesy of the artist hide caption

There is new music from Quilt and that makes me happy. The band's third album, which is out next week on Feb. 26, is called Plaza, and its winsome, wandering electric folk thrills my late-1960s soul. The songs on Plaza, a combination of brand new material and newly invigorated older tunes, often revolve around place and family. We asked Anna Fox Rochinski (vocals/guitars), Shane Butler (vocals/guitars) and John Andrews (drums/vocals) to tell us how they were made. Below, you can listen to every song on the new album, alongside comments from band members about how each one was made.

"This song was written several years ago. It is meant to be a simple reflection on the passing strangers in a public space, with lush orchestration and an alternate guitar tuning to give it a darker atmosphere. The lyrics of the song are built around a fleeting moment of eye contact with a stranger in passing- "knowing eyes of passersby gaze into mine". I think of it as a soundscape with a little poem inside of it." -- Anna

"Roller was one of the last songs written for Plaza. I wrote it at my house in upstate N.Y. during the winter, which was long and snowy and often fell below zero degrees. The song itself is very upbeat and poppy but much of its lyrical content is very sad. Feeling stuck, frustrated with a partner or any kind of relationship, or just other people in general. Being a 'roller' is a sensation that lies somewhere between claiming strength for yourself but also hiding to protect yourself from the human bullshit of the world. Like, 'Yo, I got this, let me do my thing' Haha. Taking time for yourself to recalibrate your life, cruising through your experiences with your head on your shoulders, not being so affected by other people. I wrote the guitar solo in the middle to sound kind of woozy and like a normal guitar solo that had had one too many beers. The "bridge" is at the end of the song, and doesn't really have a conclusion, but opens it back up... 'Please, you've got me hiding out, and I can't quite seem to make a noise about it.'" -- Anna

"'Searching For' is a song that was written between New York and Atlanta over 2015. For the lyrics I was thinking a lot about 'home' while being temporarily displaced and technically without one over the whole of 2014 touring for Held In Splendor. I was considering moving back to the city after being away for many years. I moved to the city when I was 14 years old, from upstate New York, and then away from it to Boston when I was 18. In my experience it's just this weird place that is always changing and always staying the same, which makes its aura of 'home' pretty odd.

"I do like to joke [that] the song is about google searches, though ... haha, maybe it is on some level. I was definitely thinking a lot about social media at the time, so that's not out of the question. The whole bridge references that 'living on your own stage' idea. I mean, it's an age old concept [that] just has a whole new meaning these days with all our little gadgets and profiles. All this put on some nostalgia glasses for when I was a teenager and writing more punk-derivative songs. I was missing that part of myself a bit. Bands like The Urinals and The Clean were definitely dancing around my thoughts a lot during this time. We kinda just started riffing all together in Atlanta and the whole song got filled out pretty quick, everyone adding their arrangements naturally." -- Shane

"This song is a true mishmash of bits. The opening guitar lines which repeat throughout are something Shane and I just weirdly played together one day in summer '14, so we just stuck it in there. The verses and bridge I had written like three years ago or something, and I felt really relieved that they finally found a home. John wrote the chorus during preproduction and came up with these magically fitting lyrics, and we all stitched the whole thing together. I love Shane's zippy guitar line thing in the verses; it reminds me of the Talking Heads.

"The lyrics are inspired by my love for short stories, particularly Raymond Carver, and just the whole experience of sitting down with a book of short stories and briefly entering and exiting little worlds. I wanted this song to be like a fictional scenario set to music. It wasn't until I had to sit down and finalize the lyrics that I decided the song would be about a strange group or cult at a place called 'O'Connor's Barn' and the words are kind of a re-telling from one friend to another about the ultimate demise of its leader, who fits the typical profile of a charming, sexual, eerily controlling male, as well as a plea for her friend to escape. The female protagonist/narrator has some mixed feelings by the end because she probably really did love him ... just in that special way that one loves a slightly evil, controlling, brilliant, charismatic narcissist." — Anna

"The first version of this song was written while I was still living in Boston and feeling a lot of distance from the city. I was in a relationship that just didn't seem to work out no matter what we did and overall it was just a very isolating time. I recorded an earlier version of the song solo in both Baltimore & Doylestown, Pa. with Natalie Mering (Weyes Blood) on back up vocals. I really wanted to play the song with the band though, so we worked on it in upstate New York. For the chorus I was ruminating on one of the first loves of my life at the time, and thinking a lot about how we 'almost' come so close to things at moments in our lives, yet they still seem so distant. Maybe they aren't.

"Anna wrote a guitar line over the choruses that ended up being one of my favorite touches on the song. In the studio we doubled it with piano. In terms of the production we definitely were interested in going for a lot more of a contemporary approach for the actual sonics as we did with most of the record. Haha ... thinking about it [now], the songs we were listening to in the studio for production inspiration were probably a lot different than what one might think when they hear the final product." — Shane

"The ninth chord which repeats throughout and parts of the verse melody began as a pastoral, slow, fingerpicked folk song I was working on in my mom's kitchen at some point last year. The bridge probably came about around that same time, too. The guitar solo in the middle was its own thing, around which I was trying unsuccessfully to write a whole other song. And the chorus was lifted from another song entirely, that we had to put into another key and simplify to sound good with the verses.

"So when all these scraps were in front of everyone, everything slowly got put together and it became this funk song all of a sudden; it got really filled out with the other instruments and Shane came up with that 'We've got an answer' part. The lyrics began very specifically about this one thing, I was trying to write about this tragic Hollywood/'80s corrupt real estate murder story that I found fascinating (too long to put here), and then chilled out on that premise and just opened it up more broadly to be about desperation in general. I love the string arrangements that Simon [Hanes] did, madly." — Anna

"I wrote 'Something There' when I was living in Lancaster, Pa. It's a simple song about the concept of, 'you get what you give,' especially in relationships. 'If you are loving, she's loving, if you are leaving, she's leaving,' pretty much sums it up." — John

"The main chunk of 'Padova' was originally written in this crazy villa-like building we were playing in Padova, Italy. We had some time off after our soundcheck and I just wandered around this huge mansion and found a guitar in this huge wooden room with a chandelier. The guitar was missing a string so I detuned the whole thing to something that sounded alright and the song just plopped out.

"My mother had just passed away earlier that year and I was thinking a lot about death at the time. A few of the songs on the record have some reflections from this period but I feel that this song in particular captures the particular feeling of that time sonically. I made a recording of it in that room and then brought it up when we were in Atlanta. In upstate we added the outro to the song and rounded out all the parts. Mary Lattimore played an amazing harp part on it and [Producer] Jarvis [Taveniere] slid some guitar around. I think the final touch that really wooed me was John's piano playing. I had been thinking a lot about Nina Simone at this time and the way her songs flow with such comforting intensity. I feel like John's piano really has this feeling to it ... It is heartbreaking, strong, and fluid." — Shane

"This little ditty was written probably in winter '13. It's about distractions and miscommunication between close associates, and the 'island' as something we build subconsciously, where we hide in our 'towers' to avoid confrontation and truth. Ultimately that s*** always crumbles and you have to face each other and reality, and it's usually the better option, no matter what." — Anna

"'Own Ways' was originally written in [bassist] Keven [Lareau]'s mom's house in New Hampshire. We had a chunk of time where we would go up there a lot to practice. One day John, Keven and I walked downstairs and just started to jam on the riff that ended up being 'Own Ways,' yet it was really slow. While we had some time off between Atlanta and the studio I spent a lot of time listening back to all the songs we had and thought we could use another fast one. So, I made a demo version of it with a lot faster pace and then brought up the idea in the studio.

"This song is really special to me because it is one of those songs where the final arrangement was totally made by the full band in the room. The lyrics, chords, and tone were all set, yet it never had its final form until we were all in the studio. Anna's lead-guitar lines for this song really helped set the mood. Her playing reminds me of the attitude in some Gun Club songs that I love. Kinda sinister and mystic at the same time. In the studio we had our viola player distort and distone as intensely as she could til the end. That's when the song really felt complete; as her strings scraped into a climax at the end. I've been craving more dissonance in our songs and was so happy to have those moments close out the record." — Shane