Accessibility links
What We Loved At SXSW On Thursday : All Songs Considered Late at night, the All Songs crowd took to the streets to talk about the acts that blew them away on day three of SXSW. 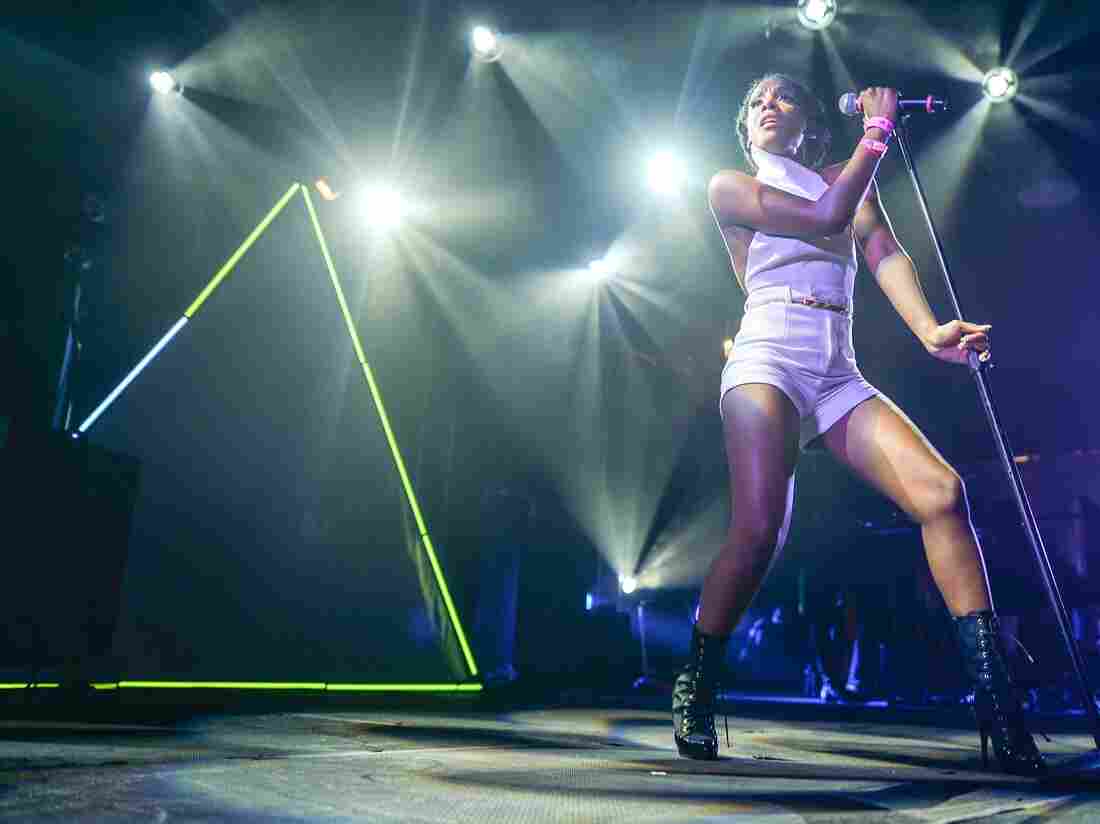 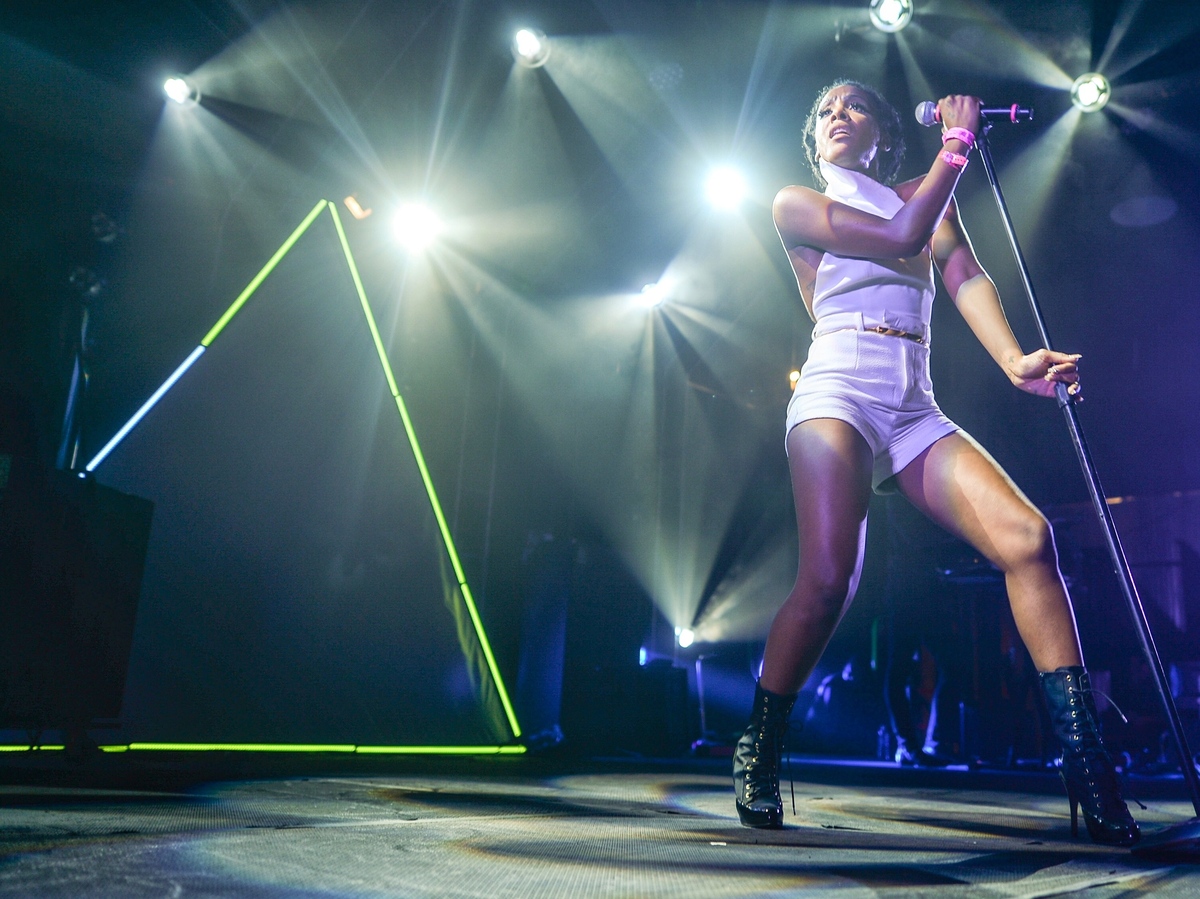 It's our third All Songs Considered podcast of SXSW 2016, recorded long after midnight in the streets of Austin. Robin Hilton is considering having former interns carry him around; Stephen Thompson is measuring distances by the length of his collapsed body. Yet youthful Spanish band Hinds perhaps best encapsulated the overall feeling of our group at the start of their set yesterday: "You know that feeling where you are very excited and very drunk and very hungover at the same time? We are having this."

It was another great day at SXSW. Bob Boilen, Robin Hilton, Katie Presley and Stephen Thompson saw breakout young acts like Marina Kaye, Declan McKenna, Car Seat Headrest and, of course, Hinds. There was time for the classics, too. Katie & Stephen saw Loretta Lynn at Stubb's, and learned the maximum distance at which Loretta Lynn is still recognizable by her sparkly red dress (any distance). Listen to the podcast above, read our staff picks for best set of the day and let Maren Morris sing you a South X Lullaby at the bottom of the page.

Declan McKenna at The Yard

You could hear the songwriting wheels turning in this 17 year old British boy. His song lean both rock and pop; they're intricate but not overworked. —Bob Boilen

Apart from finally seeing Car Seat Headrest (which, no joke, will release the album of the decade later this year) Thursday's most memorable show came from Lewis Del Mar. Originally from Washington, D.C. and now based out of Rockaway Beach, the duo features drummer and producer Max Harwood along with frontman Danny Miller, a magnetic and thrilling performer who at one point leapt from the stage and prowled through the crowd, unnerving everyone around him. The music is a arresting mix of found sounds, strange samples, intricate polyrhythms and rock. Sometimes dark and foreboding, sometimes anthemic and celebratory, this is definitely one group to watch for this year. —Robin Hilton

The Mariachi Ghost at Friends

What? Your first time playing SXSW? That's what The Mariachi Ghost announced to their very enthusiastic crown at Friends last night. A Mexican mariachi/jarocho/rock band from Winnipeg?? Absolutely. And it works seamlessly. Dressed in traditional mariachi traje with their faces painted a la dia de los muertos, they powered through their very energetic and rock-inspired jarocho. A new band for me and I'm glad I found them. I can't wait to hear more. —Felix Contreras

The highlights were thick on the ground Thursday, from the perfect pop-punk of toyGuitar to the Sia-approved booming pop of French singer Marina Kaye, but ... I mean, Loretta Lynn. How often do you get to see a country legend of Lynn's caliber in any setting? Before a huge crowd at Stubb's, the iconic singer interspersed classics like "Fist City" with songs from her new album Full Circle. —Stephen Thompson

Sevdaliza at The Sidewinder

A beautiful singer and dancer/performer backed by powerful electronic textures. She's based in Holland but with an Iranian background and a stunning voice. —Bob Boilen

Jonathan Tyler should be a name every rock and roll loyalist should have under her breath. Every Ryan Adams fan, everyone who's suddenly loving Anderson East this year, needs to hear his feisty, gospelized songs, delivered with just enough of a punk sneer to make it dirty. Around midnight at the Majestic, he was fighting noise bleed from the EDM party downstairs, but Tyler and his Stones-loving band still took the stage like they'd discovered a half-world between the Garden and the Ryman. "I'll give you my last dime if you say — that — you'll — be --- miiine," Tyler intoned over a chicken-scratch riff, as if he were playing with the minds of the millions: just the way good old rock stars do. I hope this good young one gets a bigger spotlight soon. --Ann Powers

At 1 a.m, I ended up upstairs at Tellers, watching Calliope Musicals' singer Carrie Fussell sit on the floor, gazing directly into the eyes of fans seating around her, as he band played psychedelic show tune improv jazz behind her. Next came the freeform dance led by a costumed alien with a video screen on her (his?) chest, and finally, someone passed out signs reading ENJOY as the whole room joined in the Calliope Musicals mantra: I dreamed this dream would never end. Magical. I now have a protective cone of beautiful vibes around me and will float through the rest of this fest. --Ann Powers