Accessibility links
All Songs +1: Explosions In The Sky Finds Its Way Through 'The Wilderness' : All Songs Considered Members of Explosion in the Sky talk about the challenge of making "The Wilderness," the most adventurous record yet from an already sonically mind-bending band. 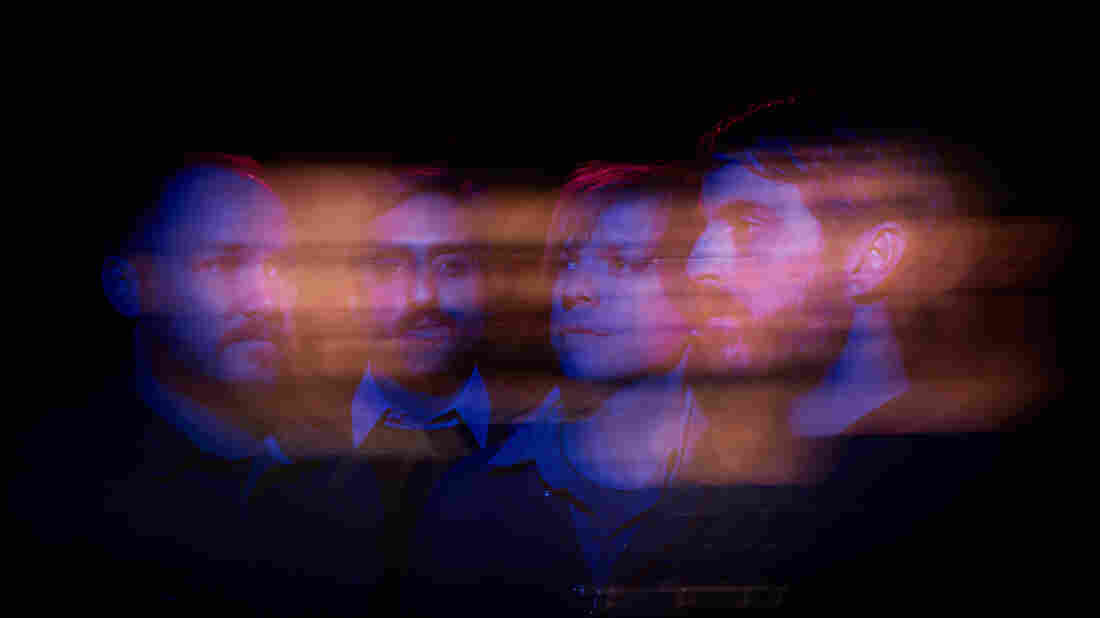 Explosions In The Sky's new album, The Wilderness, is out April 1. Nick Simonite/Courtesy of the artist hide caption 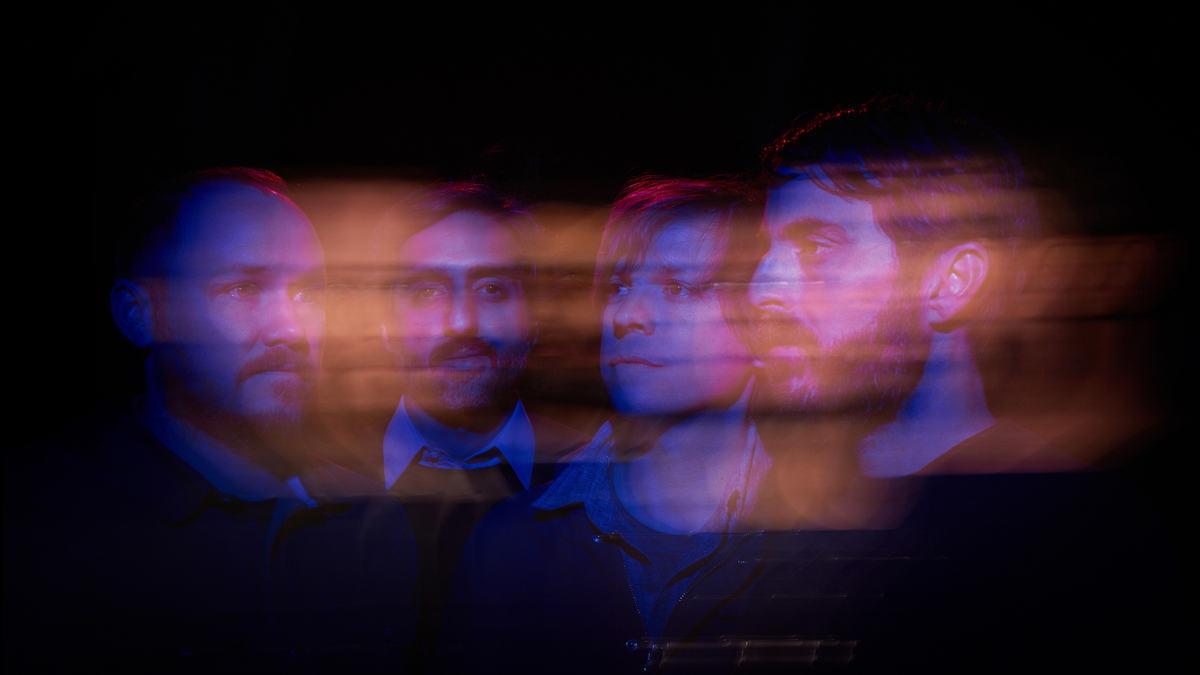 Explosions In The Sky's new album, The Wilderness, is out April 1.

Nick Simonite/Courtesy of the artist

There's adventurous new music from Explosions in the Sky and you can hear a conversation with the band and some of the music on this week's +1 podcast. The Wilderness is the instrumental rock band's first album of non-soundtrack songs in five years, and the sound on this record stretches the already expansive sound of this instrumental guitar band from blissful and emotional to mind-bending and downright scary. 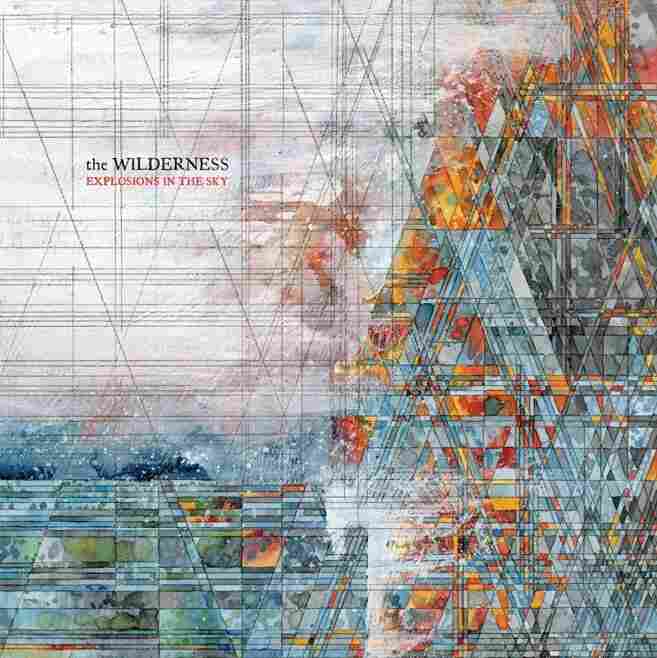 Explosions In The Sky, The Wilderness Courtesy of the artist hide caption

When they were done with their recording session with engineer/producer John Congleton, they thought they had failed. Give a listen to the conversation and find out how they managed to make this album go from unsatisfying to their favorite adventure in hours flat. You can also read excerpts of the conversation below.

The Wilderness comes out April 1. Give a listen.

On finishing the album at the very last minute:

Munaf Rayani: We spent two weeks recording the album and the day before our last day we were pretty certain that the album would not be finished. Not only that particular recording session, but ever. And we were pretty down on the whole thing. And then the next day we went in and a couple of new ideas were thrown about how to fix the problems we had, and then about three hours later we had solved those problems, changed a few, seemingly minor things, and all of a sudden we were finished and we loved the album.

There was, in particular, a track ["Infinite Orbit"] that was giving us a lot of trouble. We just collectively were very unsure if this had a place on the album, but without it, it left a big hole. So we went home that night, thought about it, talked a lot, came back and started to dissect it and pick out what we do like about the song. And there was maybe one melody in it, so we stripped everything away, slowed the melody down and then re-wrote the rest of it.

And then there was another song that was having a similar problem in that there was a lot going on with the song. It just wasn't working, we didn't know why. So John Congleton, the guy who recorded the album and helped us produce this album, he said, "Let's just take it back to its bare bones," and just left two elements out of what was maybe 15 tracks. As we heard that, we realized that that's what was good about the song. And we very slowly put a few more elements on top of it. That song is called "The Landing Cliffs" — it's the last song on the album. It changed the entire feel of the song and, for us, that changed the entire feel of the album.

On the first song they wrote for the album, "The Wilderness":

Rayani: That was the one that just had this sound that was sort of new, that we hadn't heard before from ourselves or from anyone else, but that still felt like us; it still had the emotional resonance that we really want our songs to have while still being kind of weird, putting you maybe on your back foot a little bit if you have an expectation of what this new album's going to sound like.

On the importance of keeping things unpredictable after 16 years:

Rayani: We have loose narratives to help us along and to, kind of, lead one another in a direction, but there's no absolute story. I mean this is something that we've talked about throughout the run of our musical career and instrumental music in general. We could absolutely tell you, word-for-word what the story is but you can easily turn that around and make that as you wish. I mean that's the power of instrumental music: It's left to your own imagination.

Michael James: And it's not just exclusive to the audience, it happens to us as well. We say "Oh, I know exactly where this song is supposed to go." And we try it, and it's perfect and it hits, and then we say, "Throw that away." It's time to try a new way to finish this particular thought. Because we've been a band for 16 years, we can finish each others' thoughts, not just in speaking but in music. And we just wanted to find a new way this time. And sometimes it works. Sometimes it doesn't.

On the band's long relationship with producer John Congleton:

Rayani: For this album we made the decision, fairly early on, because John used to be just an engineer: That's all he wanted to do, he felt like that was where his talents were most useful. But as the years went on, I think just working with bands and being a great musician himself, he realized being a producer, and helping a band realize their vision and more than just setting up microphones and capturing the sound, was something he was really suited to and really good at. And we just thought that his talents would be wasted if we didn't let him help us more in the way.

James: He's on every one of our albums. You hear him, he has a particular way of capturing sounds that come from a producer's side of the brain, even though he never carried that title officially, he's always been there. And not just with our records but the other records that he's worked on and there's a consistency. So this time around, we just put the hat on him and shined a light and said, "Alright John, you've been weird this whole time. Let's get weirder." And we did!

On reluctantly embracing electronic sounds on the new album:

James: You know, kind of jumping the chasm on using the computer as a sound-generating device was hard for us, because we've been a guitar band our entire career.

Rayani: We were all pretty hesitant to apply it to this thing of ours because we all have that interest of it feeling very human, very tangible. We don't want to become an electronic band. We don't want it to be where you just hit play and the song plays on its own, you know? We want to interact with these new technologies and it feel more human than robotic — and robotic is too rude of a word because music comes from so many different places now. And so we would have a conversation about, "Man this melody is strong, but what other instrument could we play it on? Or what other sound manipulation could we present it through?" These conversations were really deep and interesting, and the result was what we put onto these nine tracks.

On the challenging sound of the record:

James: There can't be light without darkness. If there's no shadows then you'll never see the lights. So you got to turn the whole thing up and experience the really, sort of Kubrickian terror that we're trying on some songs if you really want to hear the more delicate parts. It's a challenge, I think, as a listener, but it was something that we were OK, making it challenging. I think "challenging" was something we were searching for.

Rayani: That's exactly what we were searching for. If somebody says, "Man, I hated that record," I believe you. And if somebody says, "Man, I loved that record," man I believe you. But if you were in the middle and said "I don't know. I heard it, it was kind of whatever," you're lying! You can hate it, or you can love it, but I think that that's what we were kind of really pushing for. Let there be no middle ground here, either we commit or we don't. And we committed, and this is what we came up with.