Accessibility links
Bruce Springsteen's Tribute To Prince Is A Lesson In Public Mourning : All Songs Considered The two musicians both emerged in the 1970s and hit simultaneous critical and commercial peaks a decade later. At a show in Brooklyn on Saturday, The E Street Band covered "Purple Rain." 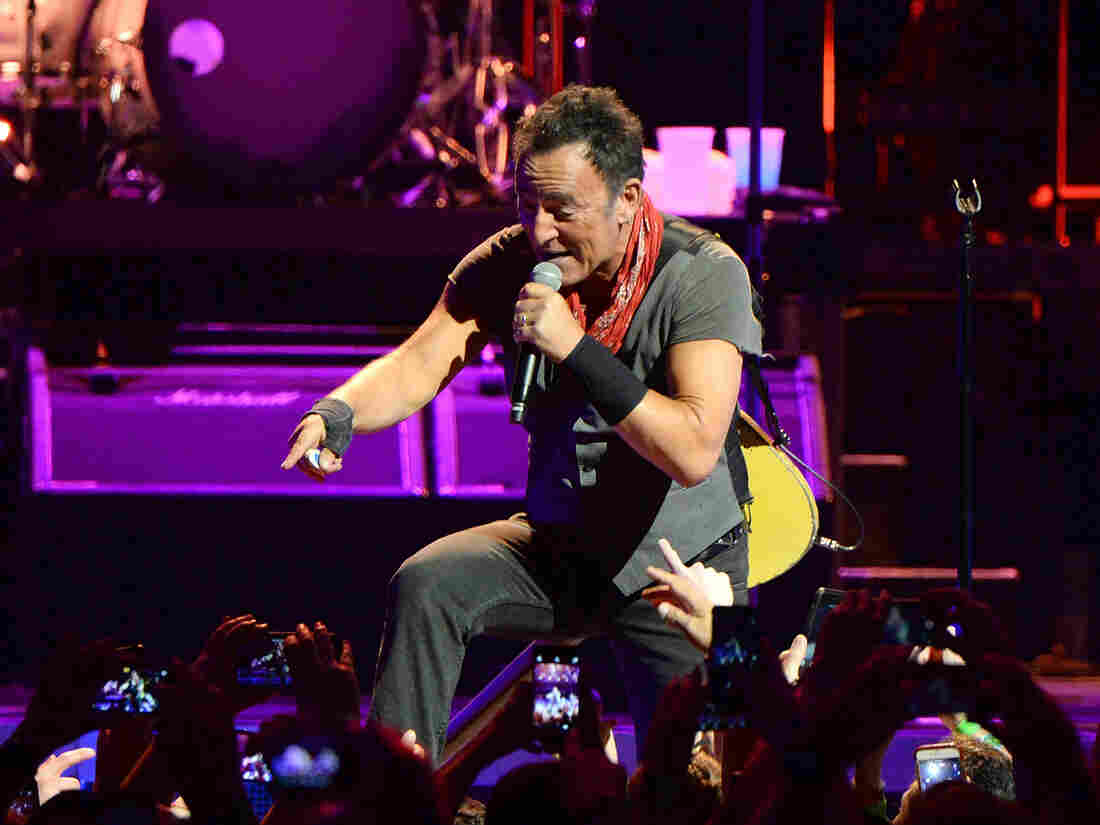 At the Barclays Center in Brooklyn on Saturday night, Bruce Springsteen and the E Street Band paid tribute to Prince with a cover of "Purple Rain." Kevin Mazur/Getty Images hide caption 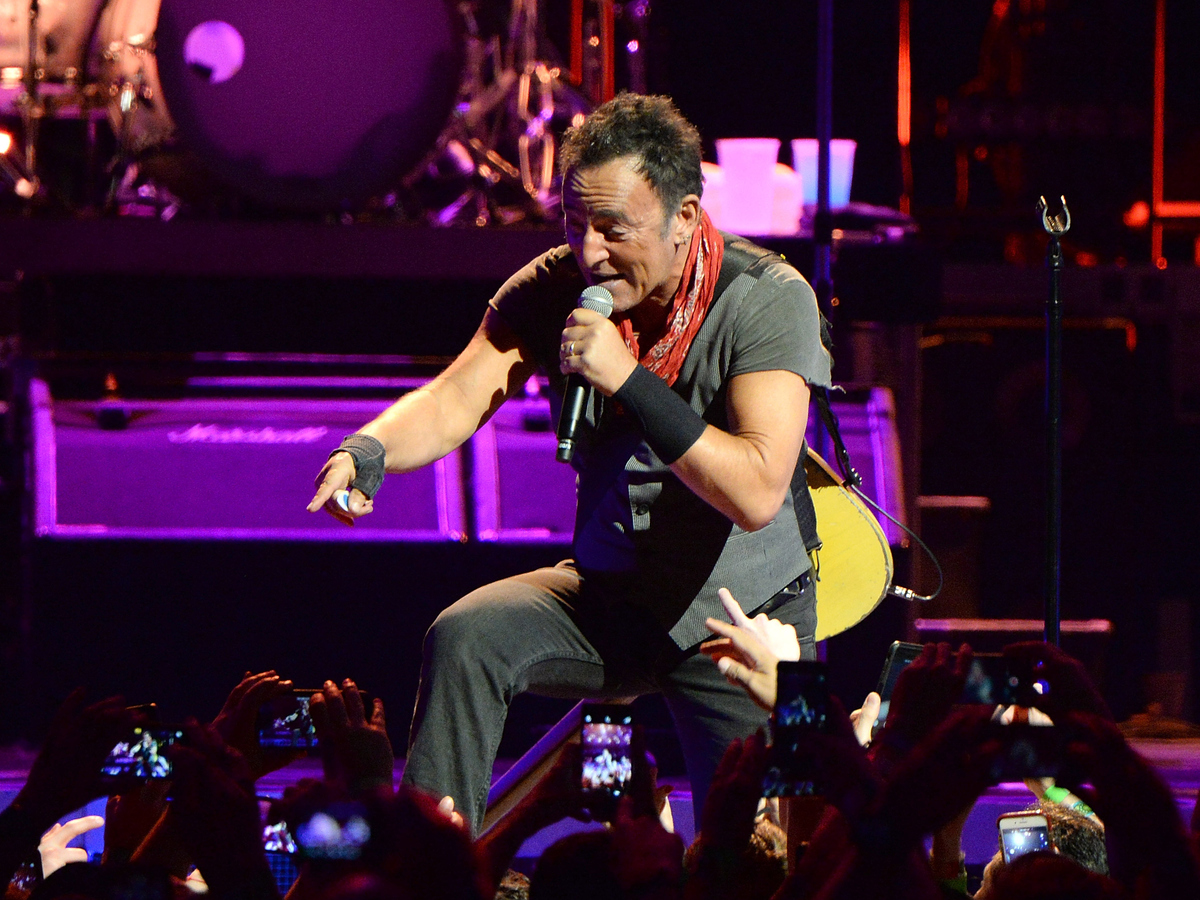 At the Barclays Center in Brooklyn on Saturday night, Bruce Springsteen and the E Street Band paid tribute to Prince with a cover of "Purple Rain."

From the minute the band walked on stage Saturday night at the Barclays Center, it was clear this wasn't going to be an ordinary Bruce Springsteen and the E Street Band show. Instead of coming out in pairs, house lights up, the stage lights went to purple and the musicians took their places quickly. Springsteen strode stage left to check in with Steve Van Zandt, and then walked back to face drummer Max Weinberg. With a barely perceptible nod of the head, he counted as Max clicked his sticks eight times, Springsteen turned around towards the end of the count, taking his place at the mic, and with a decisive nod to cue the entire band, began the opening chords of Prince's "Purple Rain."

Bruce's effort to maintain the song's building intensity was visible; it felt like it originated from a sense of loss, an expression of the emptiness that accompanies the departure of a kindred spirit more than the original song's timbre of romantic loss and regret. Nils Lofgren took the solo, which was absolutely the right call; Lofgren natively plays with the same kind of fluidity you'd find in a Prince solo, and he played it note-for-note — this was not the night for personal interpretation. By the song's final crescendo, Springsteen was singing with his eyes closed, conducting the band with the neck of his guitar or an upraised arm, before shouting, "Prince forever! God bless!" as the song thundered to a close.

There were other tributes throughout the show. As the house lights switched out from purple and the E Street Band prepared to go into the usual opening number this tour, you suddenly realized that every member of the E Street Band was wearing purple. This wouldn't be remarkable except there is a strict black-only dress code on that stage: I stood behind Max Weinberg once during a show and saw that even things like the cable ties, Solo cups and tissue box covers are black. It was a small gesture, probably not noticed by everyone, but quietly meaningful for those that did.

Following "Meet Me In The City," Springsteen stepped to the mic. "We'd like to dedicate this show to Prince. There's never been anyone better ... Bandleader, showman, arranger ... Whenever I would catch one of his shows, I would always leave humbled. I'm going to miss that. We're going to miss that." If you needed verbal confirmation that Springsteen was a fan, that Prince's music meant something to him (which sometimes, his very old-white-bro audience needs), there, you had it.

The commonality between the two artists is larger than their differences. They both got their start in the '70s, and their careers followed a similar trajectory. Springsteen got tagged with the "new Dylan" moniker after being signed to Columbia by John Hammond and eventually appeared on the cover of both Time and Newsweek, while Prince was the Boy Wonder who was granted full creative control in his first contract with Warner Bros. at the age of 18. Their first two albums held moments of greatness, but met with mixed commercial and critical success — all of which changed with their third releases. For Prince, that was 1980's Dirty Mind, and for Springsteen, 1975's Born To Run.

These were the game-changers that laid the groundwork towards their careful progression to superstardom in 1984, with Purple Rain and Born In The USA. The five-week reign of "When Doves Cry" at the top of the Billboard Hot 100 held "Dancing In The Dark" at bay, depriving Springsteen his best shot at a No. 1 single. And as Springsteen alluded to in his dedication, both artists have well-deserved reputations for sprawling, legendary live shows, assuming their roles as bandleaders from the exact same lineage, straight from James Brown.

This tour, organized in support of Springsteen's 35th anniversary box set for The River -- has been unusually rigid and formulaic. He opens with an outtake from that time period, plays the album from start to finish, and then follows the record with another 10-12 songs from the greatest hits collection, with very few exceptions to that rule. One of those exceptions took place on the opening night of the tour on January 16, when Springsteen opened the encore with "Rebel Rebel," five days after the passing of David Bowie. (There was a similar tribute offered at the next show with the death of Glenn Frey.)

There's something absolutely spiritual about the power of being able to mourn in public, as Springsteen himself demonstrated after the deaths of E Street Band members Danny Federici in 2008 and then Clarence Clemons in 2011. In 2012, the Wrecking Ball tour was like attending a rock and roll wake every night. The gestures would evolve as the tour went on, but there were multiple carefully crafted moments and regular reminders: "Are we missing anybody?" Springsteen would ask every night, gesturing to the temporarily empty places stage left. He would head out to a platform in the center of the floor for "Tenth Avenue Freeze-Out," the song that's "the story about the band," and when he got to the lyric, "When the change was made uptown/and the Big Man joined the band," the aforementioned band would swing to a stop, and Clarence Clemons would appear on the video screen; a short montage of clips featuring Clarence (and Danny) throughout the years would play. Springsteen would stand there and watch it with the audience every time, visibly emotional to varying degrees depending on the night and the crowd. (He caught me openly weeping at a show in Arizona on that tour, and as he gestured at me, I realized that it wasn't just sweat on his face at that moment, either.)

So Springsteen knows the value of working your grief out communally, and the power of expressing that despair through live rock and roll. The catharsis that came out of the performance of "Purple Rain" Saturday night was for him just as it was for the audience.

But the disruption of the formula of the show on this night was significant, as was the gesture of beginning the performance with another artist's composition. And the dedication had real meaning, in how it impacted the band's performance. It's the end of the U.S. segment of the Springsteen tour, and at its previous show in New York (March 23 at Madison Square Garden, a makeup date for a snowed-out show in January) the performance was definitely not the E Street Band at its strongest. It felt like they were ready for this segment to wind down; playing The River's 20 songs every single night for a 37-date U.S. tour isn't an easy thing to do.

But Saturday night in Brooklyn? You'd think they'd just started the tour. Every musician on that stage was finding something more to offer, and almost every performance of every song felt renewed. Springsteen was in the crowd having fun during the quasi-punk "Crush On You," selling it for all he was worth. Steve Van Zandt offered strong guitar work, meeting Bruce and not passing up opportunities to take a lead. Nils Lofgren threatened to light the place on fire during "Because The Night." Garry Tallent was literally bouncing as his bass notes rippled through the songs. Roy Bittan's introduction to "Point Blank," probably the consistent highlight of the show, had even more pathos and depth. Max Weinberg was insanely crisp, without even one lost note. If Prince had been at this particular show, he would have nodded in approval, and then figured out how to up his game some more.

The emotional highlight of the evening would be a bold and passionate version of "Backstreets," from 1975's Born To Run, a story about youth and reckless abandon and regret. These days, the song appears in a set list to reward an audience, or to make a point. It is grand and epic, and its power has not dimmed over the years. It's always an emotional moment, but Saturday night, as Springsteen sang, "We swore we'd live forever," it was hard to not see the song and the performance through another lens, and I am positive that Springsteen's voice wavered with emotion even as he delivered the song with power and depth.

As a fan of an artist with similar longevity to Prince, it was hard to stand in the audience and not think about whether or not this would be the last time you'd ever get to hear some of the rarer material again — some of the songs from The River just weren't performed after the initial tour behind the record in 1980 and '81 — as you considered how many times you'd heard a more popular song played, and how easy it is to take for granted that you'll always be able to go to a Bruce Springsteen show and hear "Born To Run" or "Thunder Road" or "Dancing In The Dark." We're not even halfway through the year, but taking something like this for granted is a thing that, for me, stops right now.