Accessibility links
All Songs +1: Sofar Sounds Wants To Bring Your Favorite Musicians To Your Home : All Songs Considered In this week's +1 podcast, Bob Boilen interviews Rafe Offer of Sofar Sounds, which brings artists and fans together for shows in small, intimate spaces. 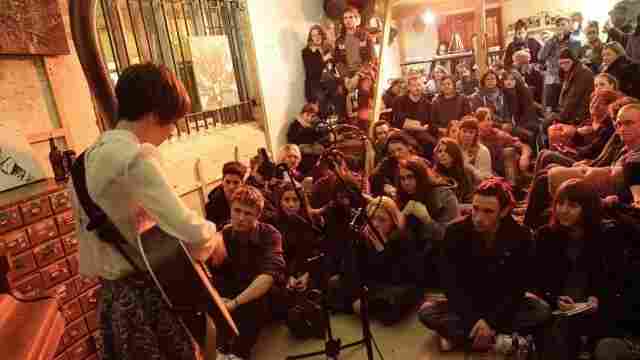 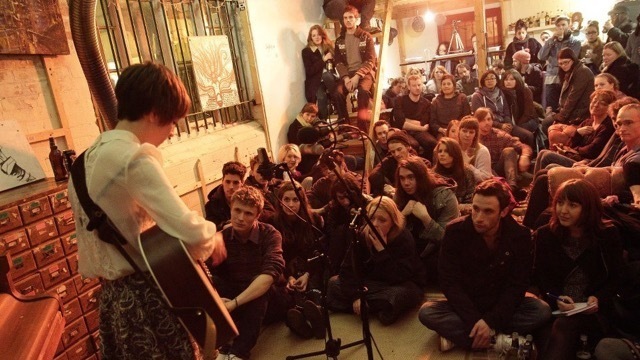 The crowd at a Sofar Sounds show.

What if you could see your favorite band in a living room, without all the background noise and cellphones you get at a live show? That's the question Rafe Offer, founder of Sofar Sounds, asked himself and a few friends after they'd seen a show where he couldn't even hear the band. Sofar Sounds operates around a simple idea: You gather together a few bands, a house in which they can perform, and an eager audience. However, the lineup isn't announced, which means the audience has no idea who's scheduled to perform until they arrive. What the crowd does know is that everyone is there for the adventure and the love of music.

In this week's All Songs Considered +1 podcast, I sit down with Rafe Offer and talk to him about why mysterious lineups and small venues make Sofar such a hit for audiences, as well as how it's changing the way we experience live music.

You can hear the full interview through the link above or read edited highlights below.

On the first-ever Sofar Sounds gig

"This is so different! It's magical! This is the way it should be: silent, or at least focused."

On why the Sofar Sounds format works so well

"Everyone always asks, 'Who is on the bill?' 'We're not going to tell you.' 'But what if I don't like it?' 'Trust us, come once. What do you have to lose?' The point of not announcing is because we believe that all music is basically equal. We don't believe in headliners and we don't want you to come for a band and not listen, or go smoke a cigarette, or frankly be rude for all the other bands. ... That gives every band an equal playing field, and it's also a bit of fun."

On the Sofar Sounds community

"It's become a community; people look for Sofar when they travel. You'll go, you'll sit in the living room, and the barriers are broken down from a usual gig. We had our first Sofar marriage, where two people met at a gig in Istanbul, and then a year later, when they were traveling in Milan, he proposed at a gig."

On the power of audience participation

"This is about discovery of music. Aside from the focus, that's why we started it; we want to give them a boost. I remember when Bastille played at a house in London. Nobody knew them, and I say to all the bands, 'If you can get audience participation, that would be great, because it would be magical if people could sing along — not forced. I remember Dan [Smith], the lead singer, saying, like, 'What? You want people to do what?' And I believe that was the first time anyone ever sang along to 'Pompeii.'"