Accessibility links
'Kayla Is Our Dio': Hear Witch Mountain's New Song : All Songs Considered After three stellar albums, the Portland doom-metal band lost its singer. Enter Kayla Dixon, a singer with soul, dynamism, drama, control and poise, all heard in the savage "Burn You Down." 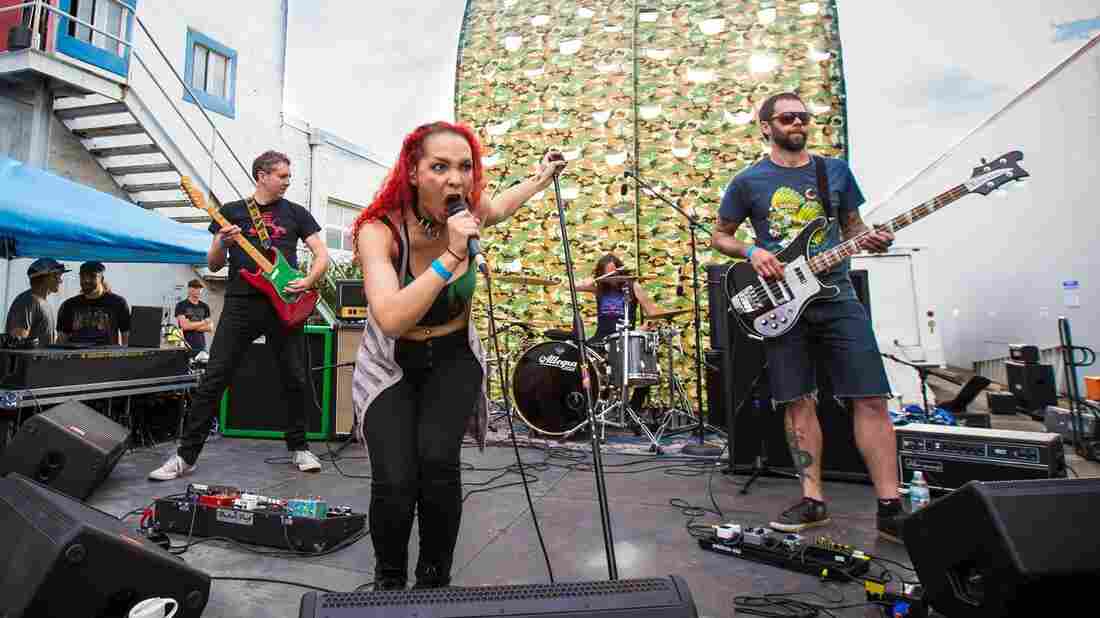 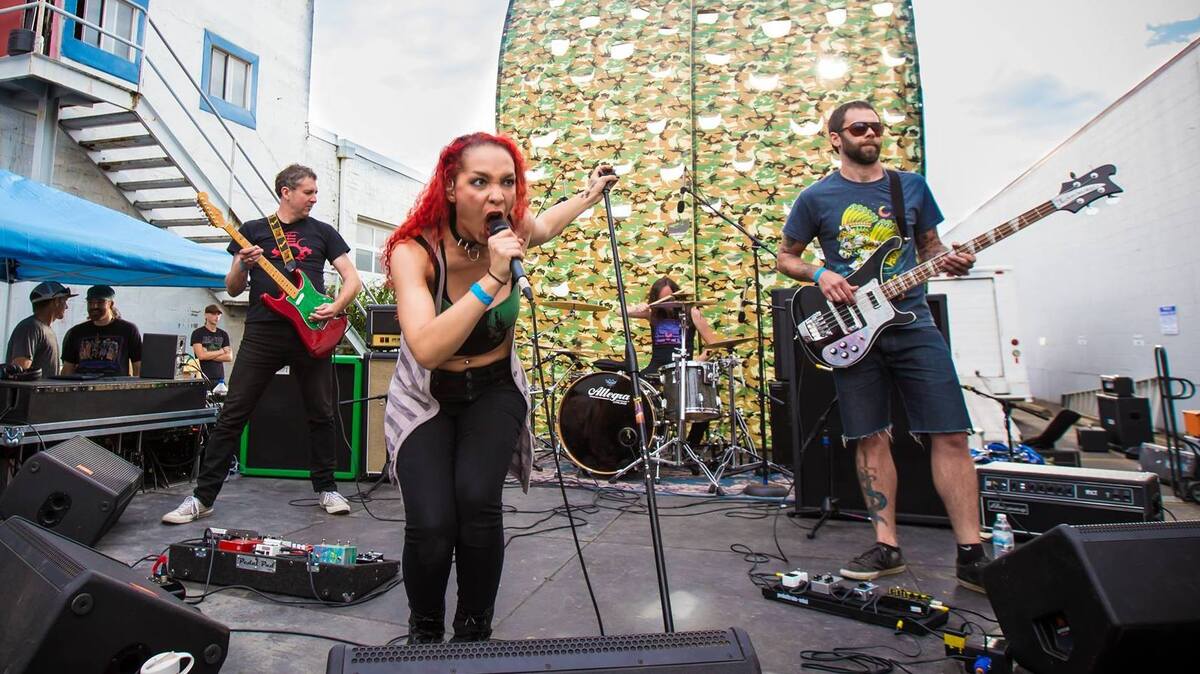 "It's like we won the lottery twice in a row," drummer Nate Carson says of Witch Mountain's new vocalist, Kayla Dixon.

In the five years since the group reactivated, Witch Mountain's ascent has been swift and monumental. In 2011, the Portland doom-metal band was rejuvenated after a decade of dormancy by Uta Plotkin, a raw yet multifaceted singer. Three stellar albums followed before Plotkin left the band to pursue other projects, with bassist Charles Thomas exiting soon thereafter.

This is make-or-break time, to find members that not only honor the band's history, but also challenge it. Enter Kayla Dixon. At 19, she submitted an audition video, which caught the attention of guitarist Rob Wrong and drummer Nate Carson. That prompted the founding members to fly her out, and within a few rehearsals, Dixon was the new vocalist for Witch Mountain. It's not hard to hear why: Kayla Dixon is a rarity in doom-metal, a singer with soul, dynamism, drama, control and poise. There's proficiency in her voice, but she knows that the blues — especially heavy-metal blues — rolls like thunder and wanders like a diva dancing around. She's got a gift for righteously nailing the perfect note.

"Burn You Down" is the first original Witch Mountain song to feature Dixon, from a self-released 12" single that includes a newly recorded version of the South Of Salem cut "Hare's Stare" on the B-side. It's a particularly savage and aerobic piece of doom, energized by not just a new voice, but also new member Justin Brown's sludgy and punk-driven bass. Wrong's guitar solo is nasty as hell, all molten wah-wah and smoked ash. Carson tells NPR, "That song sounds like the next chapter, hits all our touchstones, but also includes some nice surprises."

Lars Gotrich: Kayla, you came into three records with Uta Plotkin's melodies and lyrics, which became increasingly intricate and personal as time went on. Now that you've been with Witch Mountain one year, how have you settled into them? Nate, has her presence changed how you play old material?

Kayla Dixon: I think it's been a really easy process. The guys have been really helpful and supportive this whole time, and I think that had a lot to do with it. I feel so lucky to have been presented with this opportunity, because I'm very comfortable with the bluesy vocal style. I've studied jazz vocals in the past and felt like it was a great fit. Uta's vocal melodies are beautiful, and it's been really fun finding my own interpretation.

Nate Carson: There's a spot in the middle of "Shelter" where Uta sang a certain note and it would give me goosebumps every single time, whether on stage or in rehearsal. The first time we jammed that song with Kayla, the same thing happened, and I haven't worried since. If anything, the older material is just a bit more soulful now. As has been said, it's like we won the lottery twice in a row. 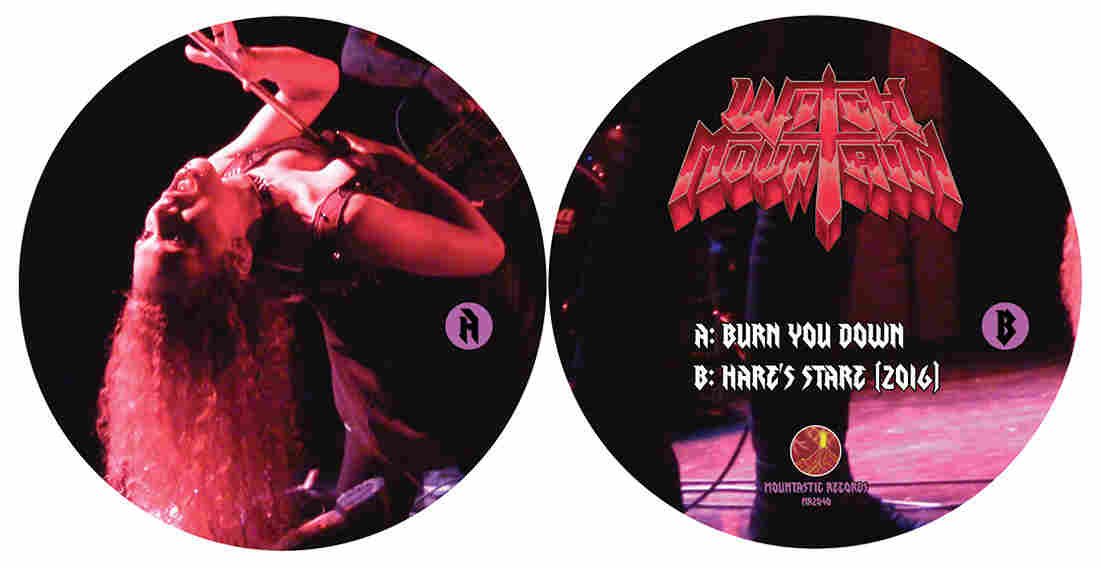 Singers cycle through y'all's career — not by choice, but it does set the band in phases. If we were lining this up with Black Sabbath's history, Kayla would be the Ian Gillan of Witch Mountain. (Born Again, totally underrated Sabbath.) How does a voice affect your songwriting? Or playing? "Burn You Down" features the nastiest guitar solo I've heard from Rob Wrong.

Carson: In my mind, Kayla is our Dio. She's as trained as anyone and kicks ass every night. I love Born Again, but Gillan was only with Sabbath for one muddled album. I feel confident we are going to have a much longer run with Kayla. As for Rob's guitar work, we recorded "Burn You Down" right after he got home from back-to-back tours with The Skull. So he's never played better in his life.

Rob Wrong: Well, thanks for the kind words about the solo! Honestly, I usually come up with song ideas that are more thought up from a musical standpoint. Sometimes I'll have ideas about vocals, but most often I just let whoever is singing come up with their own ideas and am usually pleasantly surprised. So to answer your question, I don't think vocals affect my song ideas from a riff standpoint. Having said that, we just started writing a new song based on vocal melodies from Kayla, so I guess we'll have to wait and see how that goes. Totally different approach from what I am used to.

There is a technical aspect to your voice, Kayla, that I don't hear often in doom-metal — breath support, diction, dynamics. To whom do you look for vocal inspiration? Were you trained?

Dixon: I've been taking voice lessons since I was 5. At first, it was just something I did for fun as a kid. As time went on, I started to realize that this could actually turn into a career for me, so I kept on training, and now I'm actually teaching students of my own. So I guess you could say things have come full circle in a way. Who I look to for inspiration is constantly changing. I do a lot of musical theater, so that's a constant source of inspiration. Currently, I'm most inspired by Ella Fitzgerald and Whitney Houston. For my harsh vocals, I look to people like Angela Gossow of Arch Enemy.

You had expressed that you're somewhat new to writing lyrics. What's "Burn You Down" about?

Dixon: I definitely want people to have their own interpretations. But for me, the song is about fear and how it causes us to hurt others. I think we've all had a time in our lives, at least once, when we've made a decision or taken an action based on fear. And I know that I've been personally affected by this. There have been certain people in my life who were consumed by their fear and left me confused and hurt as a child. But this song is not about forgiveness; it is a warning. At what point will we take responsibility for our own cowardice? Will we wait until it consumes us completely?

When can we expect the new Witch Mountain full-length?

Carson: We have all been anxious to get a new album out, though honestly, Mobile Of Angels came out in 2014 — so it hasn't been that long. Immediately after Kayla and Justin joined, our old friends YOB generously invited us out on tour. Then, last fall, we were hand-selected by Glenn Danzig to do the Blackest Of The Black [tour] for a month. So that was wonderful in that we lost very little momentum during the transition, and it also meant we had already played a ton of shows with this lineup before convening to write "Burn You Down." And the proof is in the pudding — that song sounds like the next chapter, hits all our touchstones, but also includes some nice surprises. And it was a really pleasant, effortless process, not overthought at all. After our next epic fall tour schedule in the months ahead, this lineup will have done more shows together than any other in Witch Mountain history. That's the band that's going to record a new album early next year, ideally for a summer 2017 release. Couldn't be happier.

"Burn You Down" b/w "Hare's Stare (2016)" comes out Sept. 16 on Bandcamp. The single is also available directly from the band via email (MountasticRecords@gmail.com).