Accessibility links
All Songs +1: The Beatles Are Live And Sounding Better Than Ever : All Songs Considered The Beatles were a great live band, but only three of their shows were ever professionally recorded. Now new technology takes those shows from The Hollywood Bowl and makes them sound better than ever.

The Beatles Live At The Hollywood Bowl

All Songs +1: The Beatles Are Live And Sounding Better Than Ever

The Beatles Live At The Hollywood Bowl 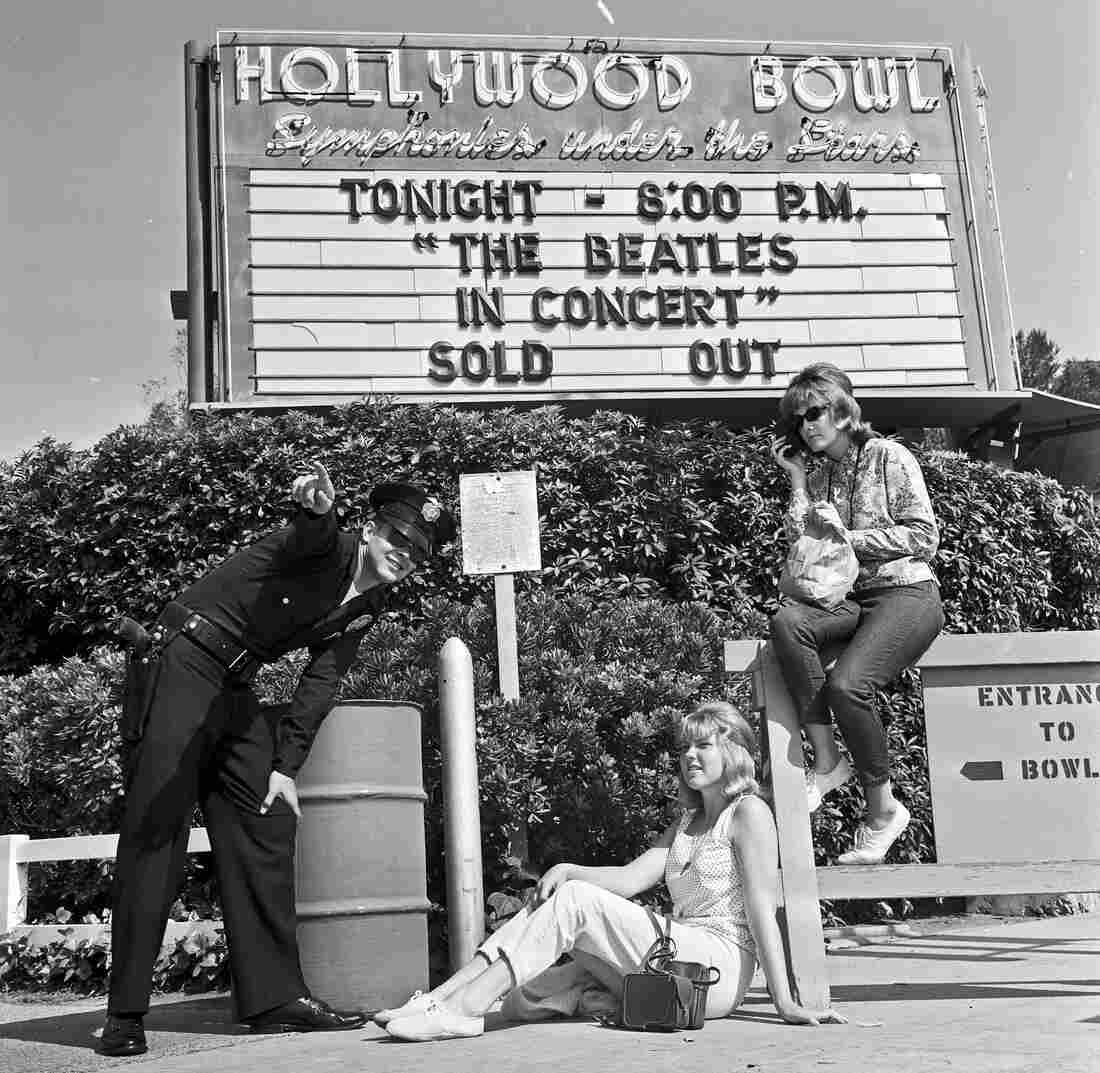 Officer Robert Yocum informs Beatle fans Chelie Mylott and Melody Yapscott, right, that they'll have to move from their spot in front of the Hollywood Bowl. The women had no tickets but hoped to get them from scalpers or sneak in. This photo was published in the Aug. 24, 1964 Los Angeles Times. John Malmin/LA Times via Getty Images hide caption

Here's something I find remarkable: There are only three professionally made recordings of The Beatles playing live in concert. Sure, there are bootleg recordings that don't sound very good. And there's a single-microphone recording from the band's days performing in Hamburg in the early '60s, but that's it.

All three professional recordings were done at The Hollywood Bowl. One is a performance from August 1964 and the other two from August of '65. And "professional" in the mid-'60s means they were recorded on three-track analog tape. That's the best they could do. Even the label, Capitol Records, concluded the recordings didn't sound good enough to release. They eventually did, but not until 1977, and even then the album they put out, The Beatles Live At The Hollywood Bowl, sounded just okay.

All that's changed thanks to the remarkable work of Giles Martin, son of the legendary Beatles producer, George Martin. Using new technology, Giles Martin has brought new clarity to the recordings, more presence and reduced the overall roar of the crowd, a sound that was so loud it drowned out much of the band's performance. Give a listen to Martin's reworked version of "A Hard Day's Night."

On this +1 edition of All Songs Considered I talk with Giles Martin from his studios at Abbey Road about how he was able to make these old recordings sound so much better. You can hear our full conversation with the link above, or read edited excerpts below.

"It's hard to think, now, about the technology they had then and how unprepared the world was for the onslaught of rock and roll. Really The Beatles were the first stadium band. When they went to Shea Stadium and played Shea Stadium and Vox [musical equipment] built special amplifiers, which were 100-watt amplifiers 'cause they thought that'd be able to cut it in Shea Stadium. [The Beatles] performed club gigs and then they took those club gigs and went and played stadiums. And no one thought about the sound. No one thought about the band being able to hear themselves. It's completely unrelated to a band going on tour now. I mean, The Beatles only had two or three roadies for the whole of that career. You think about road crews that follow Coldplay around now, it's vast. You have lighting guys, sound guys, video projection guys. And yet The Beatles were playing to 55-thousand people. It's so alien to the world, now. And it was deeply frustrating for them then, actually, because they couldn't even hear themselves."

"The Beatles were such a huge live band. Someone asked me the other day if I thought they were a good live band and I said, 'Well listen to their records.' Because their first three or four albums were of them playing live anyway. I remember remixing 'Come Together,' which is much later on Abbey Road, and I remember playing it for Paul [McCartney] and he said to me, 'God, I remember how good we were on this day.' And they were playing live. 'Come Together' is a live recording. They could really cut it live. It was just muscle memory. It's the same as anything else. We all do different things and everyone's good at something. They were just very good at playing their instruments and they just had muscle memory so they could sing and play without being able to hear themselves. And that's what The Hollywood Bowl was."

"There's a guy who works in IT here who's developing de-mix technology, you know, being able to take one track and separate it into its constituent parts. I'd been playing around with him with this for a while and I said, 'Why don't we try it on screams from the Hollywood Bowl.' And we tried it and what we ended up with is it split the one track into two tracks and you get the screams on one half and then you have this weird, almost like the band playing but it sounds a little strange. But this meant we could go into, for instance, the drum track and bring out the best of the drums, as opposed to what my father had. If he did [anything] to the drums he'd be doing it to the screams as well. So we could basically clean up the recordings. And it's always my ambition to make people feel as though they're there watching the band. Now what you have with Hollywood Bowl is you're much closer to the band."