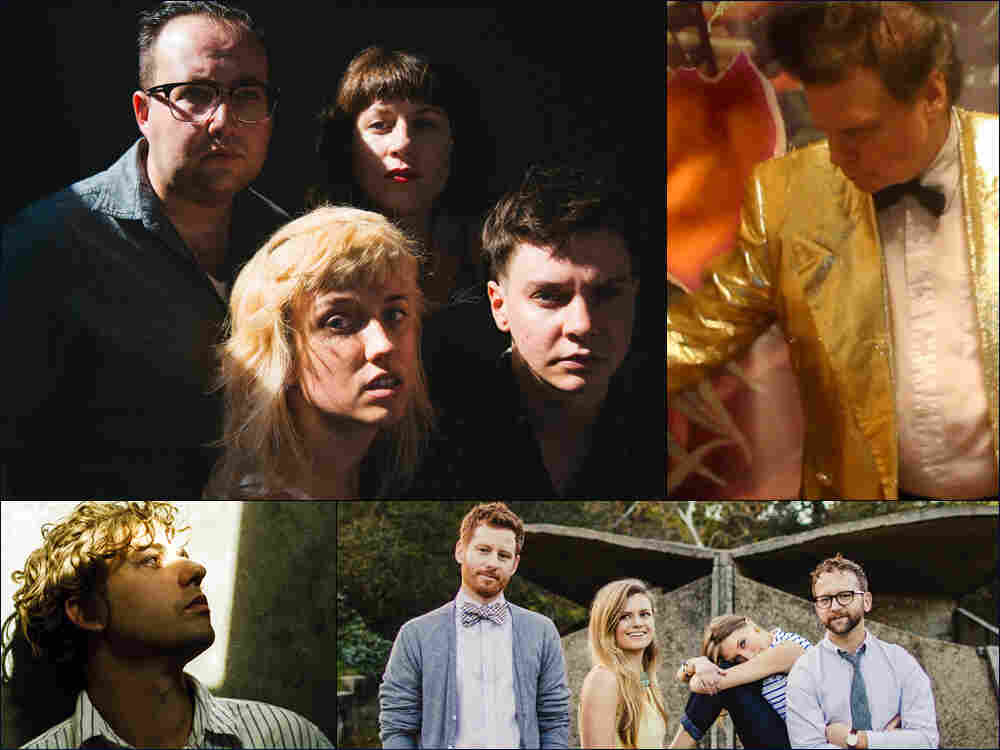 If you're looking of a break from the relentless assault of gut-churning news headlines, you've come to the right place! For this week's show I thought I'd send a little bit of good cheer into the world with some big, joyful group sing-alongs that celebrate life and all its gloriousness.

The first burst of light and love comes from the London-based band Crystal Fighters and its anthem to how momentary and magical life is. I follow with Fialta, a group from California with a simple message: We're all in this together.

Oh, Bob Boilen has some songs too, including the gloriously chaotic sax-noise of James Chance and a new cut from singer Kevin Morby about the preciousness and fragility of life.

Bonus: NPR Music's Lars Gotrich stops by to share songs from two of his favorite D.C. bands — the punk group Priests and Flasher, a band that sounds like Smashing Pumpkins if they made a new wave record.

But first up: The Chilling, Thrilling Sounds Of The Haunted House. --Robin Hilton

Saxophone player James Chance has been making brash music that's somewhere between James Brown and Ornette Coleman since the '70s. The Flesh Is Weak, his first new album in a long while, continues mixing punk with jazz-based sounds. This single comes off the album, due out Nov. 11.

A second pick from NPR Music's Lars Gotrich, this song from Flasher features Taylor Mulitz, bassist of Priests. But Flasher is its own thing, taking on new sonic terrain. "Destroy" comes from its self-titled debut EP, and sounds like the Smashing Pumpkins playing new wave.

Robin's choices are meant to lift us all up after such a tumultuous past year. London band Crystal Fighters has just the thing with the upbeat song "Lay Low." The band wrote the song following the death of its young drummer; it's meant to serve as a joyful reminder that life is magical and momentary.

01Do the Best We Can

Fialta hails from the Central California coast and took inspiration from the ongoing droughts for their album, Shadow Of A Drought. While making the album, that theme took on a meaning beyond the feelings the drought raised in them. The song "Do the Best We Can" comes from the band members' recognition that things may not be great, but we can still do the best we can. Fialta has four songs for free download on its website, just for NPR, here.

After releasing Singing Saw, an album that's grown on Bob the more he's listened to it, Kevin Morby released Beautiful Strangers b/w No Place to Fall, a pair of singles Morby dedicated to people who have had things taken away from them too quickly. Every purchase of the songs will go towards Everytown For Gun Safety. Buy the song here.

Biosphere is one of the pseudonyms of the Norwegian ambient artist Geir Jenssen. "Sweet Dreams Form A Shade" comes from his 12th studio album as Biosphere, Departed Glories. The song was inspired by Jenssen's daily walks past the woods where he was living in Poland. He researched the woods and discovered a Polish queen had hidden there in the 1200s. Imagining what kind of music she must have been hearing in her head, "Sweet Dreams Form A Shade" is a compendium of snippets from folk songs of that era.