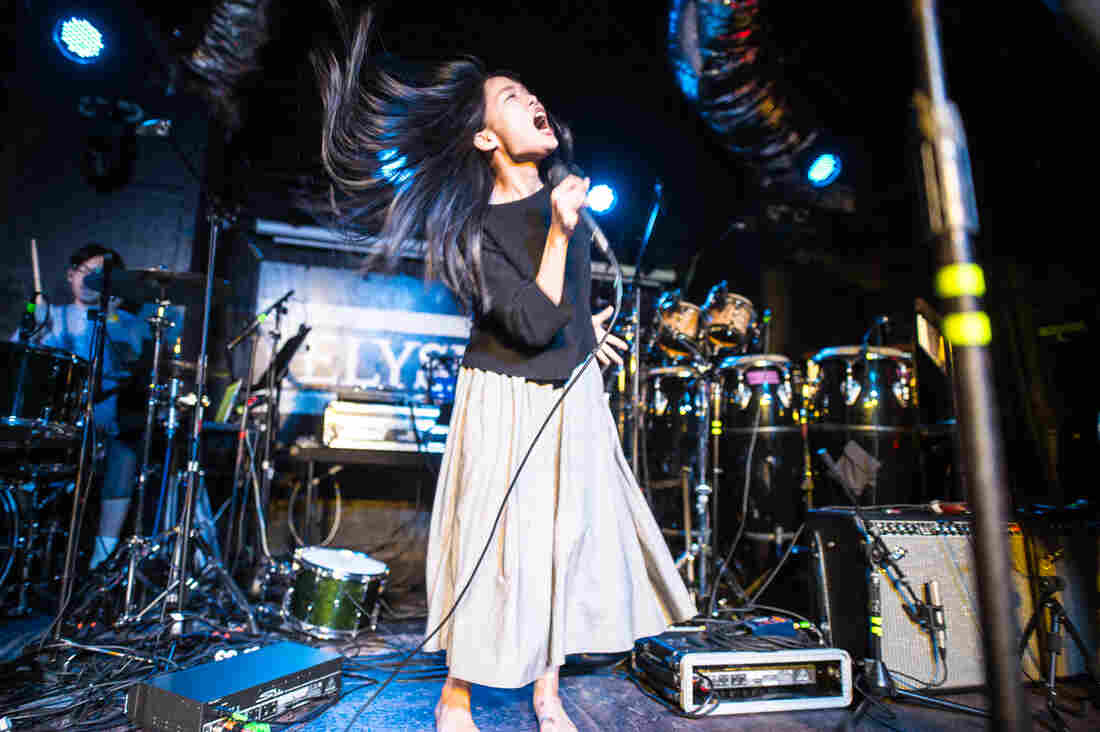 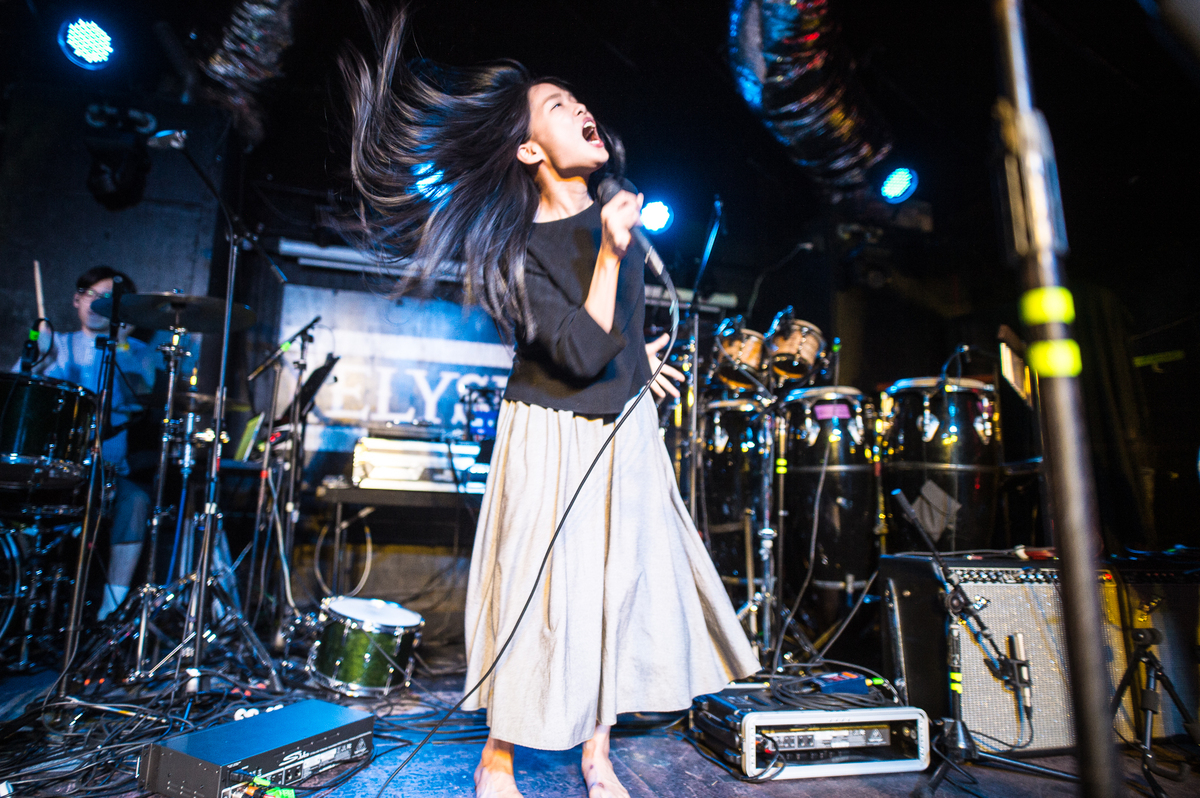 Public radio hosts from around the country, along with thousands of other music lovers, descended on Austin, Texas, this week to stand in long lines and eat breakfast tacos. And when they're not complaining about the former or posting Instagrams of the latter, they attend an ungodly number of concerts in the hopes of stumbling upon the next big band. Each day this week, All Songs Considered and hosts from our partner stations will report back on the best thing they saw the day prior.

But that's just the beginning of our SXSW coverage. Here's what else we have in store:

Hello Nico at Elysium
The best thing I saw today came from Taiwan, a band called Hello Nico. Singer Yu-Ting Chan conveys her despair with seemingly every muscle in her body. Her band could sometimes be thrashing and loud, but more often was just dark and stormy. --Bob Boilen, All Songs Considered

Five Eight at Valhalla
Five Eight is the self-proclaimed "Greatest Band That Never Was." Back in the late '80s and early '90s they were poised to be the next big act from Athens, Ga., home at the time to The B-52s and R.E.M. But after a failed major-label deal and countless other hiccups, Five Eight never got off the runway. Nearly 30 years later the four guys in the band are in their 50s and still thrash harder than most twentysomethings could ever hope to. Along with all the non-stop head bobbing and leaping around, frontman Mike Mantione brings an enormous amount of heart and humor to his performance and he's a phenomenal songwriter. Always thrilling, always memorable, and this time they brought a large batch of all-new tracks. I can't wait to hear them on an album some day. --Robin Hilton, All Songs Considered

Frances Cone at Bar 96
All day Tuesday, the terrific magazine and website She Shreds ran an impeccably curated mini-festival at Las Cruxes, with a Murderer's Row of worthy up-and-comers like Sneaks, Jay Som, Ian Sweet, Diet Cig, Dude York and many more. It wasn't easy to muster the fortitude to walk away from that stage. But I'd become obsessed with "Arizona," a single by Frances Cone, who was playing another showcase at Bar 96. I was dying to hear how the rest of the band's material might sound live, and thankfully, it followed suit in the tradition of that wonderful little pop-rock song: a keenly balanced mix of sweetness, urgency, inventiveness and all-around charm. In a packed and pleasing day, Frances Cone still stood out. --Stephen Thompson, All Songs Considered

NE-HI at The Blackheart
One of the joys of SXSW is the unexpected discovery. Of course Spoon were awesome yesterday, but I knew that going in. It's the thing you find at random or by accident that melts your jaded, been-there (too-often) heart that you remember later, and NE-HI was my first of 2017. The Chicago-based quartet played ferocious indie rock like their very existence depended on it, flailing through their songs with abandon and joy. You can triangulate them somewhere between Pavement and Pylon, connecting with the audience and reminding us that somehow that old formula of boys playing guitars with verve can still resonate. --Jim McGuinn, The Current

A Giant Dog at The Main
I was absolutely blown away by A Giant Dog. At this makeshift courtyard venue, the Austin band grinded through a set of grimy rock songs underlined by a manic performance from frontwoman Sabrina Ellis. "You probably think I don't know how to put on my lipstick," Ellis said, acknowledging a pale red streak smeared across her face halfway through the set. "But I actually bashed myself in the mouth. And then I did it again and again. And now I'm bleeding," she explained to the bemused crowd. Then, just before launching into the next song, Ellis wryly claimed that she really doesn't know how to properly put on lipstick. It was an awkward but oddly funny moment that summed up one of the most impressive performances of SXSW so far. --Jerad Walker, opbmusic

Dream Wife at Latitude 30
My Tuesday night at SXSW began at Latitude 30 to see the U.K. band Dream Wife. The all blonde group — some natural, some notsomuch — absolutely blew me away. Lead singer Rakel Mjöll has a Cheshire Cat smile, singing with both mystery and abandon. She commanded the stage with the presence of a seasoned veteran, despite remarking that this was their first show in the U.S. Guitarist Alice Go shreds and bassist Bella Podpadec adds groove and purpose to every song. Dream Wife is a perfect example of what makes SXSW special, the discovery and excitement of seeing something real that has feeling and meat to it, and makes you grateful you were there to witness it. --Russ Borris, WFUV

Anna Wise at The Empire Control Room & Garage
Anna Wise is best-known as the songwriter and vocalist who came out of seemingly nowhere as a significant collaborator on Kendrick Lamar's To Pimp a Butterfly, but her solo show makes clear that she doesn't need a single other person sharing the stage to shine. Her music combines ethereal vocals with lounge-ready beats, and she has a proclivity to jump down off the stage and join the crowd to sing along to her own vocal loops. Life lesson: if you're not your own biggest fan, no one else will be. --Jay Gabler, The Current

Spoon at The Main

The best band I saw last night was Spoon! The hometown favorites kicked off a three-night residency at The Main (formerly famed Austin venue Emo's), where they are curating a unique lineup each night. This set was a dance party — even more so than usual for Spoon, a rock band that's never been afraid to make us move. The new songs add soaring, uplifting synths to the band's ever-solid, driving rhythms. We were waving our hands high in the air. The highlight of the set was a heartfelt new song called "I Ain't the One." —Rita Houston, WFUV