Accessibility links
Perfume Genius Reveals The Doubts And Defiance Behind 'No Shape' Track By Track : All Songs Considered Mike Hadreas, the creative force behind Perfume Genius, shares the stories behind his boldest album to date. 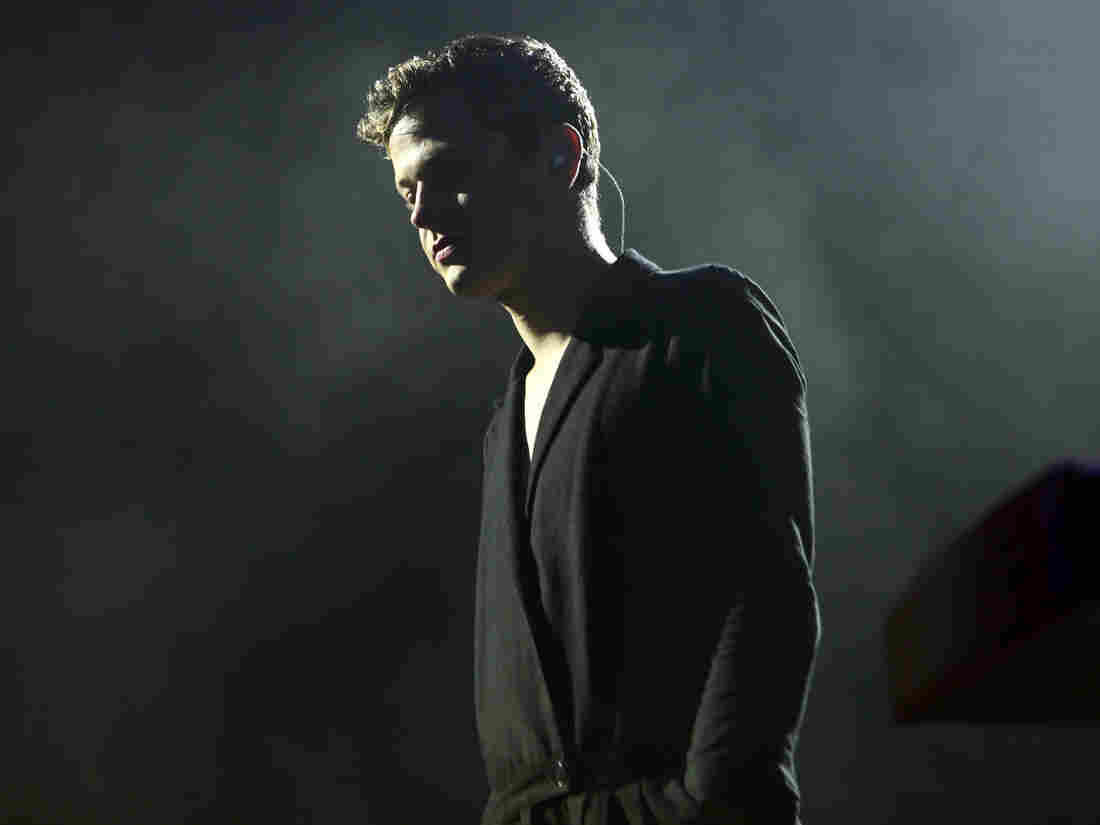 Mike Hadreas writes and records as Perfume Genius. His latest album, out May 5, is No Shape. Burak Cingi/Redferns via Getty Images hide caption 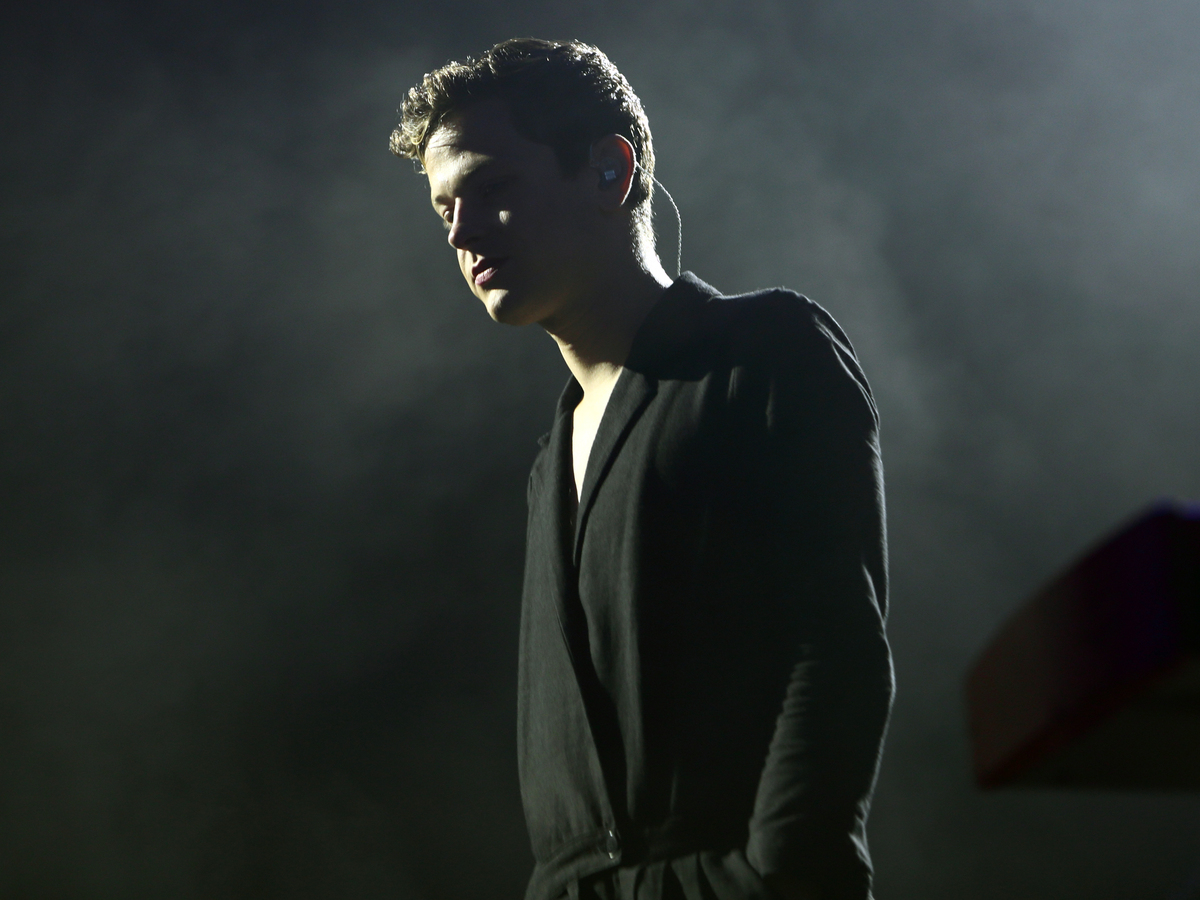 Mike Hadreas writes and records as Perfume Genius. His latest album, out May 5, is No Shape.

Since releasing his debut album Learning under the name Perfume Genius in 2010, Mike Hadreas and his music have both steadily grown bolder, more daring, more defiant. Over the course of four full-length albums his songs have evolved from intimate piano pieces to grandly orchestrated, stirring pop anthems that often rage against both his inner demons and the social and political injustices Hadreas sees in the world.

Hadreas' latest work, No Shape, is the singer's most fearless album to date and perhaps his most personal. To mark its release today (on Matador Records) and to explore its inspirations, we asked Hadreas to share some of the stories behind its creation. He opened up about his battle with Crohn's disease, gender identity and his conflicted views of religion. He also spoke openly, and frequently, about his deep love for his boyfriend, Alan Wyffels, as well as his lingering doubts and existential dread over growing older while remaining relevant as an artist.

You can read Hadreas' thoughts and stories, and hear each track below. We've also got the full album to hear via Spotify at the bottom of the page.

"When we recorded this song we had the studio set up like a makeshift church. We arranged lines of chairs like pews and had each person sing seated, facing a microphone at the front of the room. Everyone in the studio sang, including some friends of the engineer that were nearby.

"Hymns have always sounded like sung spells to me. I never felt included in the magic of the God songs I heard growing up — I knew I was going to hell before anyone ever told me that I was. People found comfort in this all-knowing source, but I felt frightened and found out. I developed some weird and very dramatic complexes. It took me a long time to not think of the universe as a judgmental debit-credit system. I haven't completely shaken it, but I no longer think that I am overdrawn with God. Grace is not something you earn, its always there. I find this idea a lot more fun. I guess this song is a collection of little prayers that are helpful to me."

"My favorite movie is Dogfight, with River Phoenix and Lili Taylor. The ending is kind of bittersweet, but so real and moving and complicated. I tried to see if I could make something similar. It's about a love that other people tell you is devious or not natural being very pure and true, physical or otherwise. When I was doing press for my last album, everybody kept asking me why I was writing about all this, when gay people can get married and it's not illegal to suck d*** in Wyoming or wherever — but there are still a lot of really horrible things going on right now. So there's a joy to this song, but it's a protest too."

"I was scared of the devil starting around age nine. Before that, I was gathering every family member in the living room, slipping a shirt over my robe so the bottom hung like a skirt and performing Gloria Estefan songs with feverish intensity. I was in the spirit. Maybe I could see my republican senator grandma squinting a little sideways at me, but I was in the spirit. I thought I would grow up to be a girl, but was not bothered that I was a boy. I knew that maybe it was strange to want a Barbie, but I wanted a Barbie and that felt very natural and counteracted whatever intangible discomfort I was sensing from family or the world that didn't have its claws in me yet.

"I saw this Facebook video of a boy, probably around seven, wearing a dress he had fashioned from a blanket, sashaying through his house while his mother applauded and cheered him on. He was so proud. It was such a beautiful thing, but bittersweet because I knew his spirit would change soon, that he'd become self-aware and ashamed, at some level. The song is about how divine he is, then and always — that he was born perfect. I don't care how cheesy that is. I just wanted a song that celebrated him and told him to hold on for a while, because we will all be waiting for him when he moves to the city. To tap into the joyous and free part of me that was just dancing and wondering what my boobs were gonna be like."

"About a year after rehab, I thought I saw a woman — I am not sure it was her — on the street who I had become close with in treatment, but we lost touch. She was pacing around near the payphone all f***** up. I wanted to write a song saying that I understand how she would go back to using. It is what makes the most sense. Being sober is living against your instincts, all the time. It's not any better morally than being f***** up. I don't think addicts should be pitied or thought of as lost. Drinking and doing drugs was the only thing that gave me a feeling of peace, of connection and what felt like grace. They saved my life for a while, before they messed me up. I am not against the stuff itself, just the realness it kept me from."

"I am not a big fan of my body and would like to leave it. Not die, but retain all my thoughts and be free of my body. I have Crohn's disease, which has caused me to not trust my insides. I feel betrayed by it. I am getting older, and that feels like a betrayal on the outside as well. I do not feel strongly connected to being a man or a woman, which was and still can be confusing. It also doesn't feel attractive. I feel like it would be more attractive or at least easier to comprehend if I picked a side.

"I wrote this song and all the rest without words. I focused on the melody, the structure of it. I made sure it had a chorus and bridge — all things I have never done before because they felt like work. I really felt inspired by the work; it still felt instinctual and cathartic, but 'adult, like I was taking charge. I sometimes felt like I lucked in to music, that I was an impostor. I am always scared when I sit down to write that nothing will come out. So it was fun to attempt capital 'M' Music."

"Sometimes I feel energy — or think I feel energy — whose true shape will not reveal itself. Or that it's something I am not supposed to know. It's very dramatic; ghosts, magic, other dimensions, et cetera. Sometimes it's a dread that feels very real and alive, like its floating near me, or something beyond good or bad that is almost shaping itself but never fully forms. I am not really certain how to explain it, but this song is about asking to be shown. I prefer there to be an alien in the house, and would like to kick it with the alien."

"For all this God stuff I have been talking about, there is an equal amount of existential dread. Depends on the day. I also like digging in to it, dramatizing it — I feel like a warlock. As much as 'Every Night' is asking to be shown something mystical and intangible, this song is kind of like being shown and realizing that there is nothing there, or that it's evil and stifling."

"This is a love song with a lot of breath-control fetish language, to communicate a willingness to really give yourself to someone completely. I like that the lyrics can also be taken many different ways."

"Being tied up in my own thoughts can lead to the neglect of everything real around me. I don't imagine its very fun sometimes for Alan. I wrote this song as him singing to me, asking me to wake up and look around and to truly be with him. [Weyes Blood's] Natalie [Mering] wrote the other side to the story, her lyrics and melody. [Producer] Blake [Mills] wrote the music at the end as well. It was really a collaboration between the three of us."

"This is a love song as well. Alan and I truly know each other. At least, more than our parents or anyone else in our lives has ever known us. It's a powerful thing and I wanted to honor it, that I know everything, that you know everything, and its okay. Sort of the opposite of my song 'Hood.'"

"Originally, I wanted to write a song about how I am attracted to toxic forms of masculinity. As much as I am mentally opposed to those archetypes, they really do it for me. I wanted to talk about that disconnect, but the song ended up more like a prolonged fantasy that took a dark turn. I am not sure why I am preoccupied with this idea of being annihilated by someone else spiritually and physically, but it certainly comes up a lot. It is kind of an embarrassing song, thematically. But I think that is kind of bodacious. There is also some power in it, because even though the lyrics might paint the picture of me as submissive, it's sung with strength and power, like I am the director of the whole thing."

"Also one of my favorite songs that I somehow have the least to say about, maybe because I said it already in the song I guess."