Accessibility links
Danny Brown And 'Silicon Valley' Go Together Like An Awkward First Date : All Songs Considered "Kool Aid," a new song from the Detroit MC, will appear on the HBO show's hip-hop-heavy soundtrack. 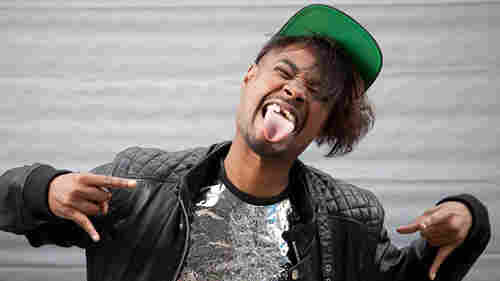 You know what's funny about "Kool Aid," the new Danny Brown song made for the HBO show Silicon Valley? No, it's not Brown's endearing squeal. It's not even the familiar way in which he recycles Kool-Aid as colloquial '80s slanguage to emphasize the importance of people staying out of his, uhh, mix.

Rather, it's the show's satirical pairing of the notoriously homogenized tech scene with such a hip-hop-heavy soundtrack, something series creator Muke Judge also brought to the equally milquetoast surroundings in the film Office Space. Maybe this is Judge's subversive way of commenting on the racial dynamic (or lack thereof) in the real Silicon Valley. Or maybe it's just hipster irony on overload; mostly vanilla cast, with chocolatey soundtrack, equals slightly off-color laughs. Of course, hip-hop and tech aren't total strangers in the least. Nas and manager Anthony Selah have made a mint as Silicon Valley investors backing tech startups ranging from Lyft to Dropbox, and other entrepreneurs are encouraging crossover in the space. But the Valley isn't exactly a bastion of inclusion.