Accessibility links
All Songs +1: Alice Coltrane's Astonishing 'Ecstatic Music' : All Songs Considered Saxophonist, composer and bandleader Ravi Coltrane — son of John and Alice Coltrane — talks about the music his mother made after she withdrew from her professional career and founded an ashram. 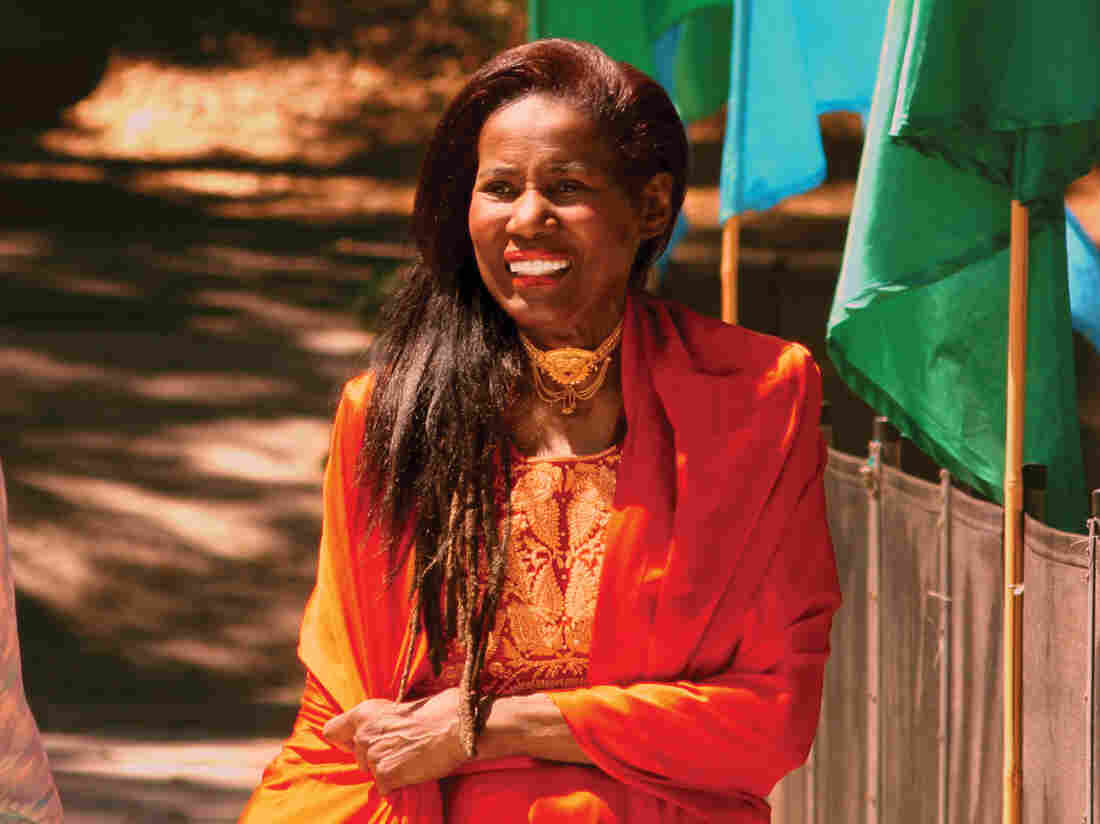 The late musician and spiritual leader Alice Coltrane Turiyasangitananda, in an undated photograph taken at her ashram in Agoura, Calif. Sri Hari Moss/Courtesy of the artist hide caption 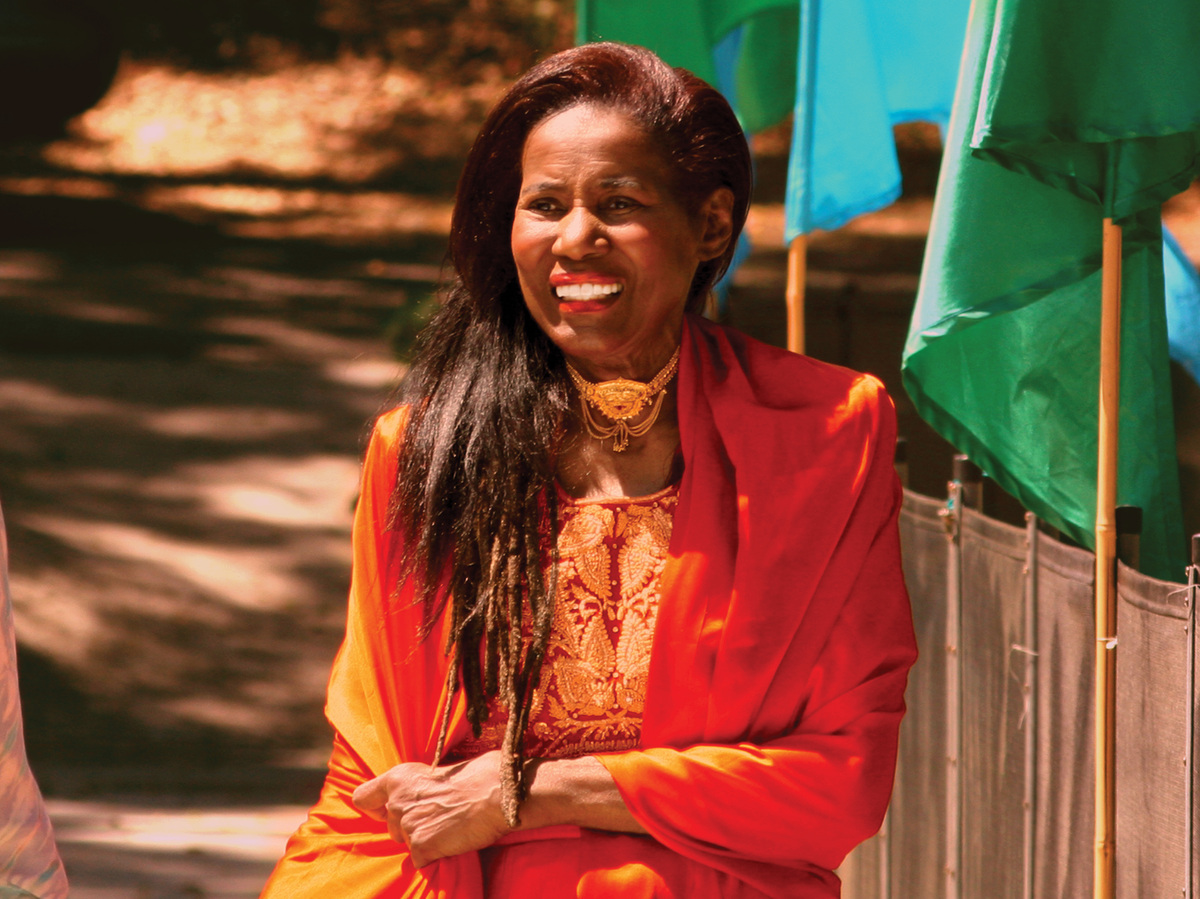 The late musician and spiritual leader Alice Coltrane Turiyasangitananda, in an undated photograph taken at her ashram in Agoura, Calif.

Sri Hari Moss/Courtesy of the artist

A newly released, not-quite-reissue album has shed some very eagerly awaited light on rarely heard music music made by one of the most fascinating — and even arguably misunderstood — musicians in jazz: the late pianist, organist, harpist, keyboard player, composer and spiritual leader Alice Coltrane Turiyasangitananda.

Curated and issued by the label Luaka Bop as World Spirituality Classics 1: The Ecstatic Music of Alice Coltrane Turiyasangitananda, it's a culling of some of the mesmerizing songs that Coltrane made after she left her professional music career. They're a singular melding of traditional Hindu devotional songs, gospel inflection, bebop and to-space-and-beyond synthesizers.

So I was really happy when one of Alice and John's children — the noted saxophonist, bandleader and producer Ravi Coltrane, whom I've known for a long time now — agreed to come to our studio in New York. Ravi, whose father died when he was still a toddler, was very close to his mom, so it was a real treat to talk with him about her and the material on this album, as well as the recordings and live concerts Ravi and Alice did together before her death in 2007.

We had a wide-ranging conversation about her life and her work — sides of the astonishing Coltrane family legacy that don't get heard often enough. And we talked about the many facets of her personality: "She was Alice Coltrane," Ravi observes, "and she was Turiyasangitananda, and she was 'Swamini' [teacher] to her students. And she was Mom to me."

The album release isn't the only big event honoring Alice Coltrane this month. Ravi Coltrane and a host of notable musicians, along with some of the students from his mother's ashram, will be performing at a concert in Brooklyn on May 21, as part of the Red Bull Music Academy Festival, to pay tribute to her legacy.

You can listen to our full conversation at the link above and read excerpts from it below.

On his mother's duet "Triloka" with the late bassist Charlie Haden, from the single album that Ravi produced for his mother, 2004's Translinear Light:

"It's an incredible dialogue between the two. I mean, that's really what it is — it's a completely free and open improvisation. Charlie had arrived to the studio to do some a few corrections on some other tracks, and my mother was at the studio recording with another group. We did some tracks with [bassist] James Genus and [drummer] Jeff ["Tain"] Watts. My mother was actually leaving the studio when Charlie was arriving. And so it wasn't really even planned that the two of them would record that day.

"And Charlie, he saw my mom leaving as he was entering and he was like, 'Hey, man, can we play one?' And my mother had a unique sort of way about her. When it was time, it was time; and when it wasn't time, it wasn't it time. We had booked these very long sessions but, again, she she'd come in and an hour later she'd say, 'OK, I think that's good for today.' And I'd say, 'Mom, we blocked the whole studio, we've got another eight hours here!' She's like, 'No, I think that we got it today, we'll come back tomorrow and do some more.'

"So I think she was ready to leave the studio. But Charlie had arrived and he started to suggest, you know, to play something together. It was very spontaneous ... They barely discussed what they were going to do. And the minute that she sat down at the piano, she began to play, and then Charlie began to play. And they improvised together, dialogued together, spoke to each other, in a beautiful way. And she played that last chord, and literally stood up while the chord was still sustaining. She bowed a little bit — and she was off. It was done.

"And I remember what Charlie said: 'Wow, man, you took me on a journey. And I was right there with you.'"

On his parents' spiritual lives and their influence:

"They had just a very strong sense of this higher power and a higher function for us all ... She was one of us. I'd like to say that about my father as well. People often think that they come from these other planets and they're so far removed from the rest of humanity and human beings in general.

"They were earthbound just like us, you know. I think that gives them more power, really — to recognize that they achieved so much as people, as human beings, just like any and all of us."