Accessibility links
Kevin Morby Explains His New Album, 'City Music' Track By Track : All Songs Considered The singer's latest album is a love letter to urban areas he loves and the people who live there. 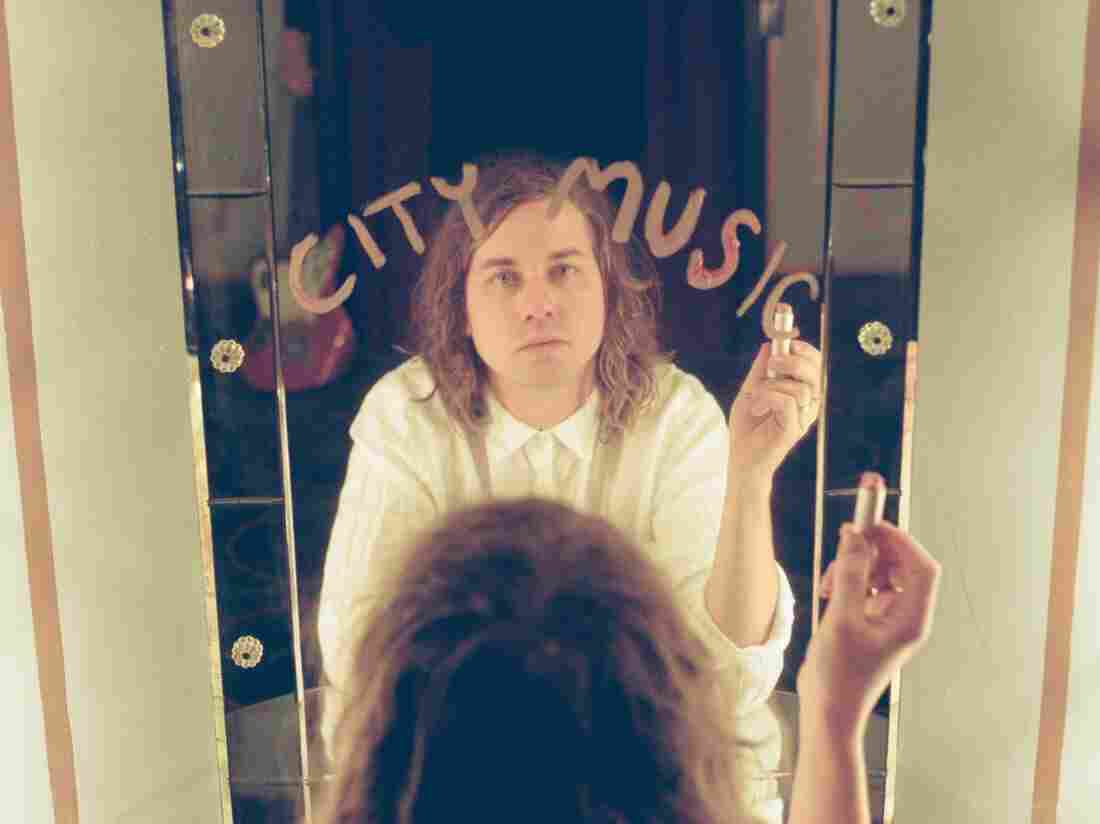 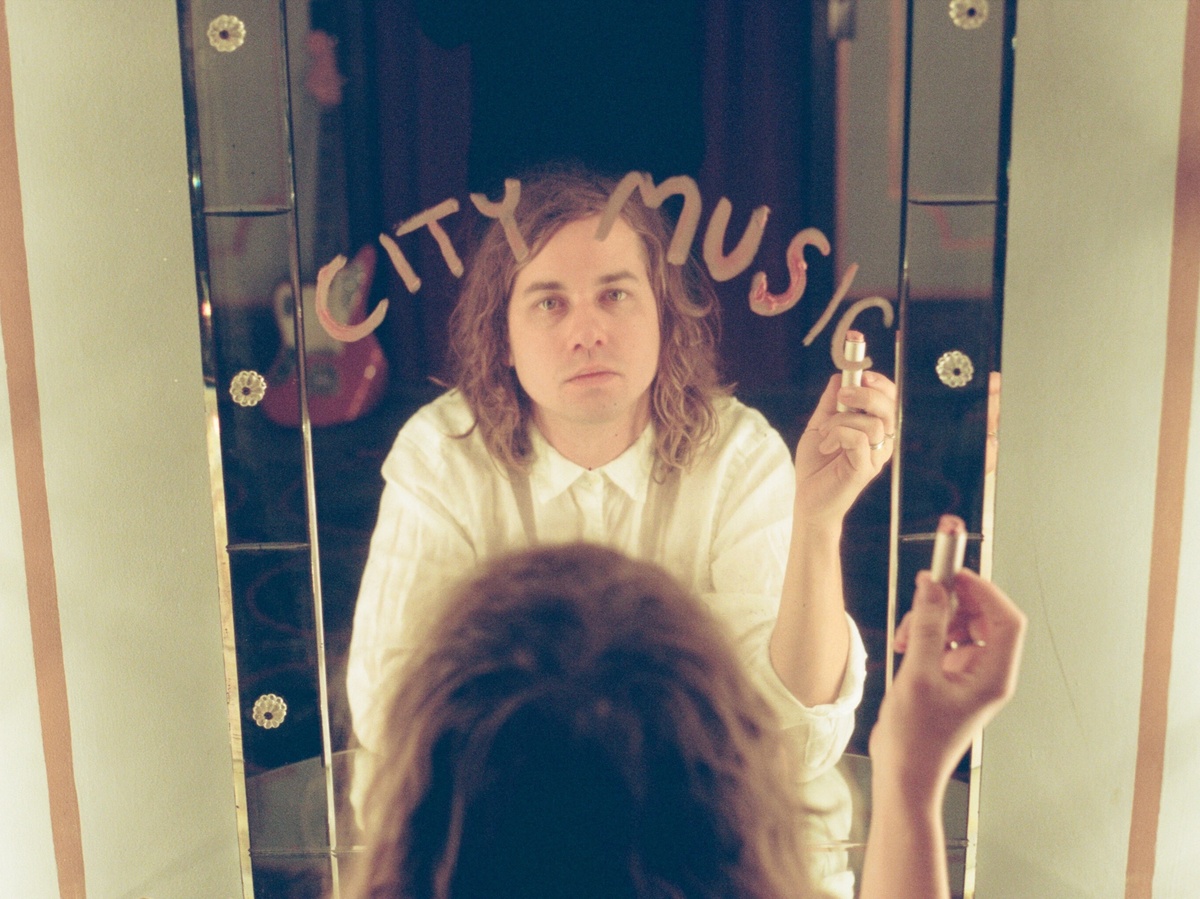 You're in a New York apartment, alone on a warm night, hearing the sounds of the city drift up from the streets. Or you're in Paris and part of the noise, moving through the crowded streets and sidewalks, both feeling the weight of the world and a being a part of that weight. Or maybe you've never even seen a large city, and mistake the glowing lights from afar for a mysterious fire.

The rumbling din of urban landscapes and the millions of stories that unfold there are, collectively, a kind of "city music." For singer Kevin Morby, it's a sound he celebrates and romanticizes on his new album, appropriately titled City Music.

For the City Music's release today on Dead Oceans, we asked Morby to share some of the thoughts, memories and stories behind each of his new songs. He talks about the exhaustion of living outside the mainstream, his love of The Ramones, and how an imaginary woman named Mabel helped pull the whole album together.

Come To Me Now

"This song is told through the perspective of an old, reclusive woman named Mabel living in an unknown part of uptown Manhattan. Mabel spends her time alone and doesn't enjoy the sun. She draws the blinds and waits for the moon to come out, for the day to sink away and for the night to expose itself. Only then does she feel any relief.

"We recorded this song live at Panoramic Studios in Stinson Beach and, last-minute, I decided to use an old pump organ that was sitting up against the wall. I had no idea that it worked, but when I learned it did I had to have it on the record. Above the organ hangs a photo of the property's previous owner, who passed away some time ago. As legend has it, the photo once fell, but mysteriously made its way back up on the wall."

"This song I wrote with drummer Justin Sullivan shortly after moving to L.A., around 2013, after our old band, The Babies, broke up. This song feels like a Babies song, and I always loved it from afar and was eager to use it on a solo record when the time felt right. It's about existing outside of society and how, on a gloomy day, that can be exhausting — to feel so much — to be so sensitive to such an abrasive world. So why don't you cry, you crybaby?"

"This began as a sort of joke to myself. I wanted to write a song called '#1234' that would act as a homage to The Ramones. While writing it I thought, 'what better way to pay homage than to just name off the original lineup [of the band] one by one?' Once I had done that, I decided to tie a neat little bow on it by lifting the refrain off the chorus of one of my favorite songs ever, 'People Who Died' by Jim Carroll. I do not know what kind of relationship Jim Carroll and The Ramones had, though I imagine they all knew each other, as they ran in the same scene. So let it be known: This song is dedicated to Joey, Johnny, Dee Dee and Tommy Ramone as well as Jim Carroll. May they all rest in peace and be wearing leather jackets in rock 'n' roll heaven."

"I wanted to write an uplifting song. All of my songs seem to have such weight — long and daunting if you're not in the right mood. So I set out to write something that could play out, almost as a children's song. Like the way Nina Simone or Bob Dylan would have these very simple and innocent songs right in the middle of an album, I wanted to write a song like that. So I wrote an ode to everyone and everything I've ever known as a friend — all of them boarding my train and departing at different stations. Some come round again, and some stay only a memory."

"This may be my favorite song on the album. I had had this song for a long time and had recorded it a few different ways but never felt like I was getting what I wanted out of it until I recorded it with [producer and multi-instrumentalist] Richard Swift. We tracked it live in the same room and on the same microphones picking everything up, just me and Richard in his live room with him on drums and me on guitar. Then we overdubbed vocals and bass. We went for the closest vocal sound possible [and] wanted to make it feel intimate, like someone was singing softly into your ear over your shoulder. So we panned my vocals hard right. We had this concept, we kept saying, 'Let's do something we might one day regret.' My favorite part of this process though was watching Richard do a three-part harmony with himself. That's him singing back up. He sure is talented."

"I was reading The Violent Bear It Away by Flannery O'Connor around the time I was writing City Music and this scene really jumped out at me, touching on a sentiment I was going for with the album. The idea of someone who's never seen a city — not even from afar — seeing one in the distance for the first time and mistaking it for a fire is very powerful to me. I had to get this cleared by the Flannery O'Connor Estate and after sending them a letter they got back to me and were very kind and helpful in letting me use the passage. I had my good friend and wonderful musician Meg Baird read this as I love not only her singing, but also speaking, voice."

"I first wrote this song on the banjo — my initial intent for it to be an instrumental piece — many years ago. Then, one day at band practice, I started playing it on my guitar while we were getting set up and the band jumped in and we developed it together. I had always loved it and wanted to use it for something, and was happy that it found a home on this record. We gave it a real Marquee Moon [an album by the band Television] makeover with my guitarist Meg Duffy's 'guitarmonies.' I wanted the lyrics to be as simple as possible — for the music to convey the real feeling and the lyrics to only act as a sort of guide. To me, the music represents what it feels like to walk through a photogenic part of a city alone, lost in your own world while surrounded by many. I call this 'city music.'"

"Another song told from the perspective of Mabel, up in her tiny apartment, watching the world go by below her. There are a lot of handclaps in the beat on this song. We recorded the handclaps together — me, Justin, Meg and engineer Drew Fischer. It was one of the funnest moments of making this album. Drew would have to hit 'record' in the control room, run up a flight of stairs and into the live room, put on head phones, and start clapping."

Caught In My Eye

"When I first moved to New York in 2006 I spent most of my time hanging out at and going to shows at a punk house in Crown Heights called The Fort where, amongst many roommates, my friend Johnny lived. Johnny loves The Germs, the legendary L.A. punk band fronted by the late, great Darby Crash. Johnny once said many years ago that he wished someone would cover his favorite Germs song, 'Caught In My Eye,' and make a beautiful version that really showcased the wonderful lyrics. So this is me attempting to do that. Thank you, Johnny. I hope you like it.

"PS: This song also features Meg Baird, who sings over the instrumental section. When she came in it only took her two takes and while I was listening to her sing from the control room her voice was so beautiful I started to cry. When I looked up and around at everyone else in the room I noticed they were all crying, too."

"Again, here we have Mabel, taking comfort in the nighttime happening in the streets below her, thriving off of the energy of others she cannot connect with and remembering friends from the past. All the while she is half-drunk, with sad songs playing on her stereo, daring the world to 'turn me on, don't turn on me'."

"I once was lost in a heavy snow looking for St. John The Divine, the gothic cathedral that sits right below Harlem in Uptown Manhattan. It was snowing so hard it was difficult to see street signs. I was very cold. When I finally found it, I walked into the warmth of the church and was met with a choir of young girls, probably around the age of seven or eight, singing various hymnals. After having been lost for so long and being greeted like this, it was just a magical moment. I reference this in the song and the young girls singing [on 'Pearly Gates'] are Richard Swift's three daughters. This song is meant to offer a playful look on death — to imagine the afterlife as some sort of party that lies past the pearly gates where you wait in line, humming a tune and hoping your outfit is attractive."

"One of my favorite movie characters is Mother Sister from Spike Lee's Do The Right Thing. It is such a beautiful name and she is such a beautiful character, Mother Sister, the all-seeing eye over the block. I set out to write a simple song in the style of Townes Van Zandt and to touch on a lost soul, someone who's down-and-out, one who has lived many different existences within their lifetime. But, like a cat on its ninth life, is afraid it is all soon coming to an end, and all they can do is send a prayer that Mother Sister will come to their aid and comfort them.

"Meg, Justin and I recorded this live while all facing each other and in only one or two takes. This song has some power over me. I never consider it one of my favorite songs until i'm performing it, and when I do perform it, it has a profound calming effect over me, like a meditation. This song is Justin's, Meg's and my mom's favorite on the record. I love all of them."