Accessibility links
Roséwave: 75 Songs To Kick Off A Faux-Luxe Summer : All Songs Considered This summer, unapologetically enjoy something that's maybe a little basic but makes you feel good. 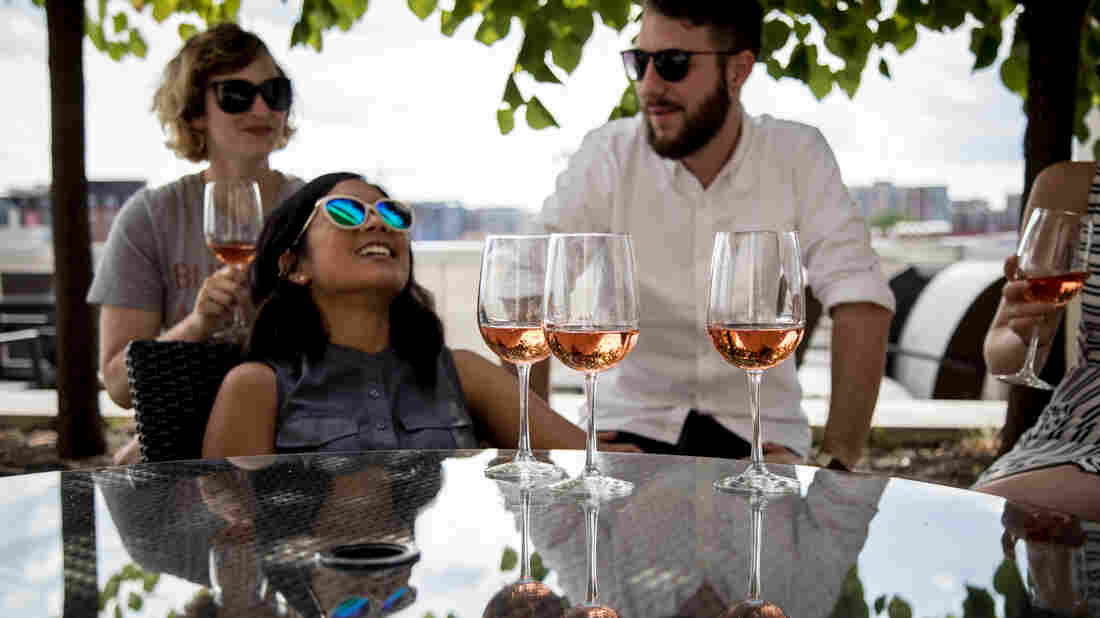 Roséwave is less about a genre (that does not exist) and more a lifestyle (that very much exists). Becky Harlan/NPR hide caption 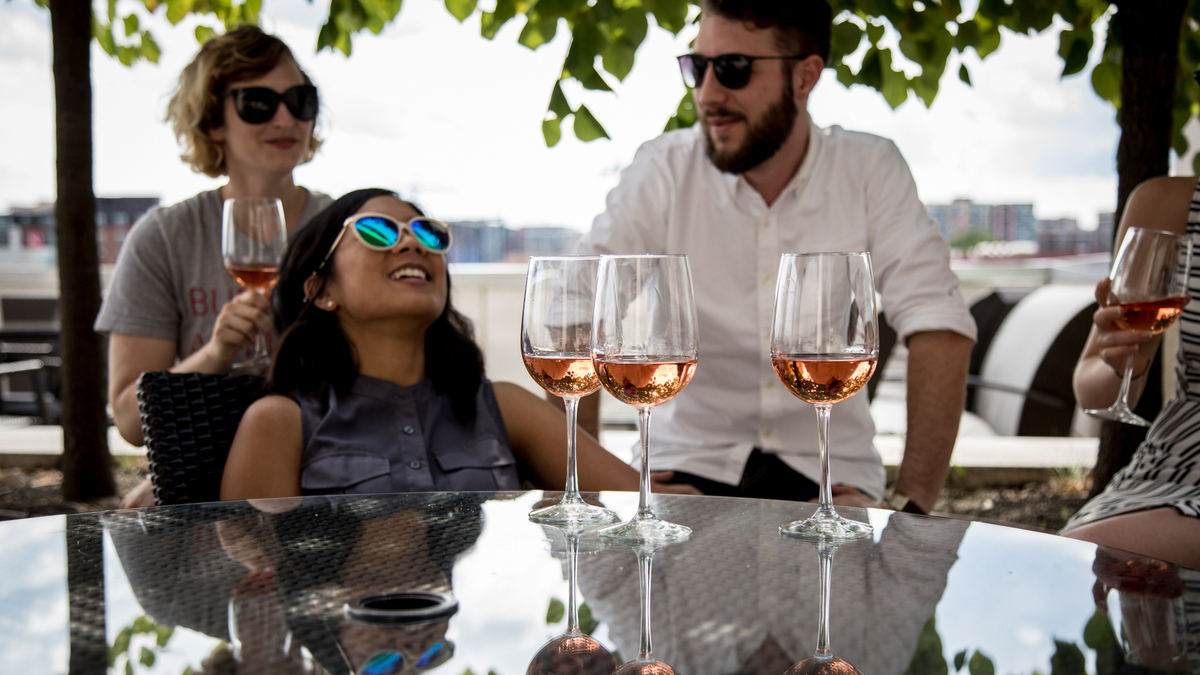 Roséwave is less about a genre (that does not exist) and more a lifestyle (that very much exists).

We wrapped a bottle in a tote bag and set up blankets and chairs on Bethany Beach in Delaware. The identical candy stores across the street, the foot-long hot dog shop offering exotic flavors like "Seattle-style" (with cream cheese) and "banh mi," and a bar on the boardwalk with a happy hour from early afternoon to early evening — this is not a fancy beach, but you can map glamour onto it, if you want to. (At least it's not Ocean City during spring break.) Following a round of frozen daiquiris slurped from plastic sandwich bags (we're classy), out came the rosé in red cups. Truly, our friend's birthday weekend had started.

Rosé is the cheapest route to faux-luxury, the costume jewelry, the clip-on earrings of wine that nevertheless looks pretty, sips sweetly and engineers a soft buzz which spurs absentminded reaching towards Spanish cocktail nuts (as long they're free). If shandies are too tart and negronis too bitter, rosé is your best friend in the summer heat. A bottle should cost no more than a cocktail with a silly name.

Roséwave is a one-word joke I made on Twitter that was less about a genre (that does not exist) and more a lifestyle (that very much exists). Without thinking too hard, y'all can probably think of five pop songs one might tipsily shout along to, whether at karaoke, in the back of a cab, out with your besties spilling a little bit of the pink drink on your new shoes. This is how a spiraling playlist sprang from friends all over the country, just in time for the first official day of summer.

"It's unapologetic enjoyment for something maybe a little basic, but makes you feel good," my friend Brittany Woodell offers, with splashes of Betty Who and Halsey among her picks. "It is not the least bit challenging," Alan Zilberman adds, "but it could be if it wanted to."

Like the many varieties of grapes that can make rosé, roséwave is not exclusive to pop music, nestled ideologically between the relaxed vibes of chillwave and the brightly-colored, semi-transparent linens of yacht-rock. Its patron saints are Lorde, HAIM, Migos and the self-professed basics who love them.

"It's mixed-company party music, it's a crowd-pleaser," says Beca Grimm, who splits the difference by choosing cuts like The Strokes' "Last Nite" and "Bad Liar," Selena Gomez's seductive shimmy. "It's the lowest common denominator — yes, because of its palatability, but also because of the persisting shimmer in that accessibility. It's a woman who's been to Coachella before, so her friends ask advice on music to impress boys who wear canvas shoes. But she maybe also brought a jay to the pool, so..."

So roséwave can be a little trashy, but also a sweet summer medicine that helps millennials bond and ugly-cry with their parents at outdoor summer concerts beside an enviable picnic spread (see: U2, Fleetwood Mac and Bruce Springsteen). But most of all, it's party music "you put on for your friends when you're trying to slap a fresh coat of paint on your otherwise messy life and prove that you're a responsible adult," says Ian Miller, bassist for Kowloon Walled City and Less Art, who contributes Ciara's "Jackie (B.M.F.)" and "Heartbeat" by the very-underrated French indie-pop band Tahiti 80. "As soon as you get a few rosés in you, however, you'll return to form and put on Migos and make out with a stranger in the coat closet."

May this roséwave playlist of 75 songs soundtrack your summer of late nights, questionable decisions, euphoric road trips and ultimate friend-hangs.

Thanks to everyone mentioned above for contributing, plus Matt Cohen, Andy Hess, Amy Bocian, Ben Freed, Amanda Teuscher, Julia Strange and my office podmates in rosé Marissa Lorusso, Lyndsey McKenna and Rachel Horn.