Accessibility links
Algiers Unpacks Its Kaleidscopically Dense 'The Underside of Power' Track By Track : All Songs Considered Algiers, now spread across three cities, have made a dense piece of work with The Underside of Power. Considering the record's sprawling scope, we asked them to help us understand it. 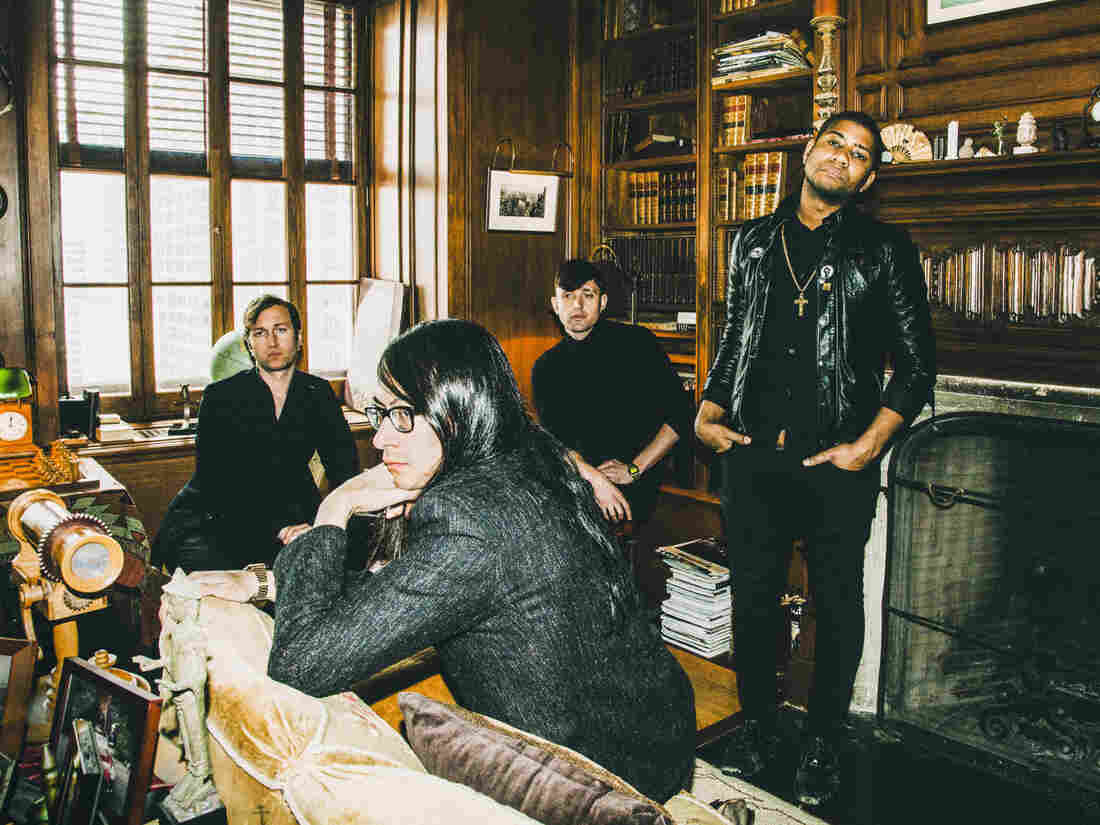 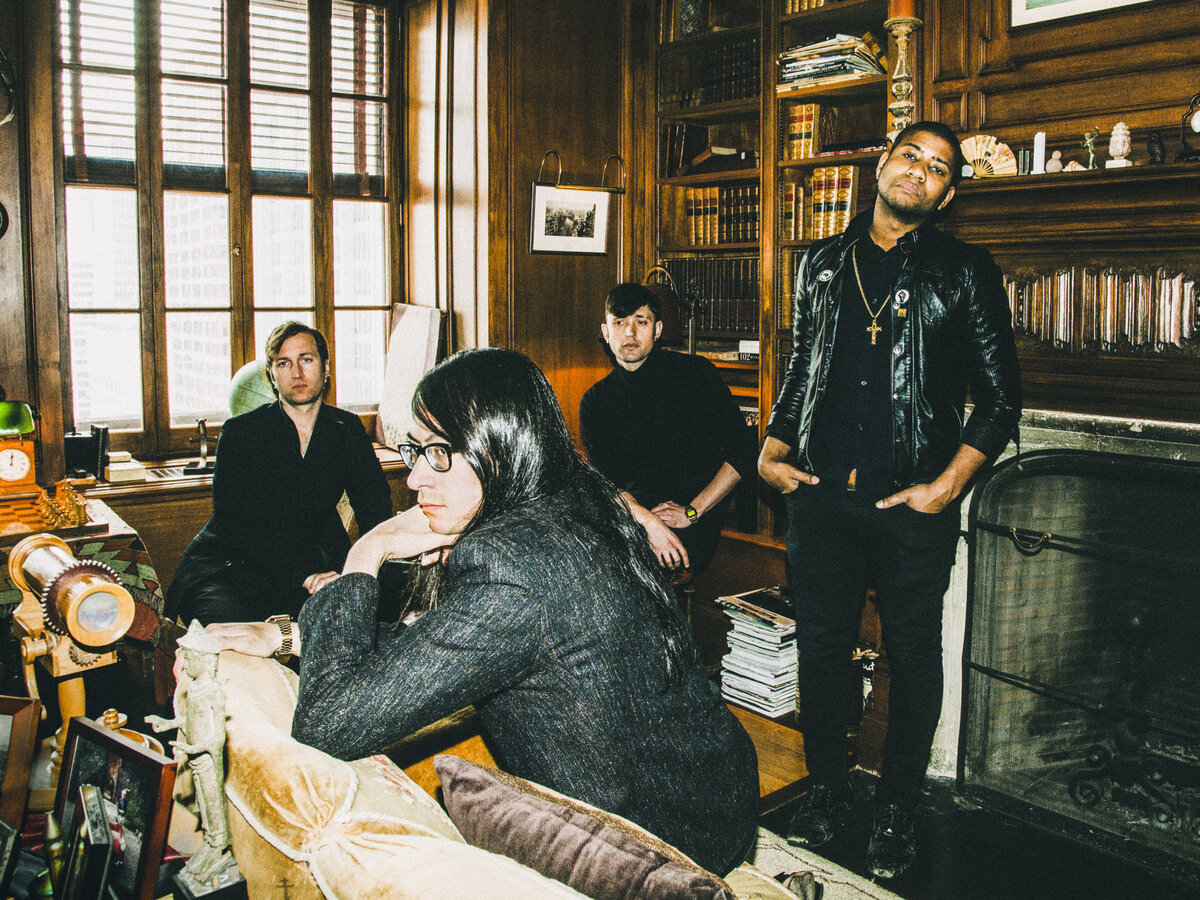 Algiers new album The Underside Of Power is one of 2017's most ambitious and intense records. I love it — but sometimes I have to just have to hit pause. There's a fierceness both in subject and sound and source, including speeches from Fred Hampton of the Black Panthers, bold and dark lyrical imagery of death and rage, sounds of people weeping, drones, chimes and what at times feels like the entire history of rock, gospel and R&B wrapped into fifty-one minutes. There's a lot to unpack here. (So much so that we recently ran a 3,800-word story on the record.)

A Band Apart: The Fractured Fury Of Algiers

Considering the density at the core of this record, we asked this Atlanta-born band, now made up of four musicians spread between three cities including New York and London, to hold our hand and talk us through the inspirations and aspirations of it.

"The song and album begins with a legendary speech from Chicago Black Panther, Fred Hampton. Here is an excerpt from the letter we wrote to his son:

We would like to start this letter with a message of gratitude. As young men growing up in the American South in the 1980s and 1990s, we had few militant political leaders comparable to you and your father to help us make sense of, and develop a response to, the cycle of violence perpetuated against black and brown people in the United States. Finding your father's words amidst the ethical bankruptcy of Reagan's, Clinton's and Bush's America, provided us with an endless source of inspiration to navigate, as Malcolm X said, 'the miserable conditions that exist on this Earth.'

"For us, there is no better way to conclude this request than with the words of your father, spoken many years ago, but just as relevant now than ever: "But when I leave you remember I said, with the last words on my lips, I am a revolutionary. And you're going to have to keep on saying that. You're going to have to say that I am a proletariat. I am the people. I'm not the pig. You've got to make a distinction. And the people are going to have to attack the pig."

Cry Of The Martyrs

"Initially, I had wanted to write something that evokes the last days of Che Guevara, holed up in a cell in Bolivia, awaiting his execution. Some of the lyrics are first-person narrative, evoking the state of mind of a revolutionary reflecting on the end of the dream of a better world, yet maintaining fidelity to their ideas to the end. It also evokes the spirit of Eleonor Kasrils, an underground anti-Apartheid activist in South Africa who was imprisoned for years.

"Sonically, I imagine this as a folk song people sing on the eve of the battle, facing certain death. It definitely has fewer antecedents than some our other songs, but maybe it builds on the genre we concocted on the first album. You can again hear some sci-fi elements juxtaposed alongside late-era Swans, Steve Reich and Nina Simone." — Ryan Mahan

The Underside of Power

"Both Ryan and I had been working on Clash-inspired, Northern Soul sketches in the same key and tempo, unbeknownst to one another. Franklin heard them, combined the best ideas, and then turned it into something special. Such an important song for us to have written as a band. I suppose it occupies the same growth as collaborators that 'Claudette' did on the previous record to me. This is one where performing live helped complete some ideas." — Lee Tesche

"Writing the music for this, I was originally inspired by old Italian zombie exploitation film soundtracks. There are too many to mention, but some of my favourite composers of this era include Nico Fidenco, Roberto Donati/Fiamma Maglione and The Goblins. It also references PiL, horror-film disco — Ms. 45 -- and The Gun Club.

"To extend the theme politically — and unsophisticatedly — I had wanted the music to reflect both capitalism and fascism as deadly viruses operating behind the scenes and controlling us subtly until we're all infected.

"It could also be a fun new dance: 'Do the Death March!'" — Ryan Mahan

"This is an old song of Franklin's, from when we first started playing. We had all consigned it to the dustbin of history until we found ourselves in [producer] Adrian [Utley]'s house of synth. We replaced the bass line with a mean-as-f*** Moog/PE-1000 combo and it become more reminiscent of Kenny Lynch's 'You Can't Fight It,' a Jamaican soul song sampling John Carpenter's Assault on Precinct 13 theme. The song also recalls the early, dark-wave ambient techno of Caroline K and Nocturnal Emissions." — Ryan Mahan

"This to me captures all the essence of early Portishead, if played with Wendy Carlos. It's a Donny Hathaway soul song mixed with The Shangri-Las and Delia Derbyshire.

"Lyrically, I wrote it as a reference to Camus' The Plague, hence the reference to one of its characters. It's actually a very personal one for me, imagining a conversation on the death of God with my mother, the kindest, truest person I know — and a true believer in god. — Ryan Mahan

"The meaning of this song's title is twofold: It's based around a sample of the gospel song 'Peace be Still' by Rev James Cleveland, but it's primarily meant to invoke Tamir Rice, the 12-year-old black boy who was shot and killed by police in Cleveland, Ohio in November 2014.

"I wanted the song to sound like the Final Judgement in the Bible, wherein the wicked are judged and condemned by the righteous with all the 'weeping and gnashing of teeth,' of the damned when justice is finally realized. I like how this translates in the 'solo' section of the song. It consists of various recordings of people inconsolably crying and weeping, while the guitar and lead vocal mirror their contortions. If you've ever witnessed something like that in real life, the sound of a person's sorrow is equal parts frightening and musical.

"In my spare time, I read a lot of blogs and listen to podcasts about unexplained deaths and missing persons — especially when it concerns corruption within state and legal institutions. The cases of some of the individuals mentioned in the song — Kindra Chapman, Sandra Bland, Andre Jones, Keith Warren, Alfred Wright — are so obviously criminal but they've been all overlooked and forgotten except by their loved ones who are still fighting for answers and justice. People need to know about these cases. They're definitely not isolated and it's a phenomenon which has been ongoing since the founding of this country." — Franklin Fisher

"Lyrically, this song is a direct attack on Trump, his proponents, the grand-scale coming out of American crypto-fascists and the corporate media's normalization of it all. If you feed into it, if you buy into it, if you give into it, it further reinforces the Orwellian layer cake of impenetrable bullshit and absurdity that had already overtaken the cultural climate back in March 2016, when this was first written. And unfortunately, Trump, Bannon and all their cronies seem to be consolidating power by the day." — Franklin Fisher

"This is inspired by horrorfied modern techno like Vatican Shadow, juxtaposed with grime beats. Travis, from Ono, kindly lent two spoken word pieces and Ben Greenberg smashed them together. Travis has been making avant-garde music since the '70s and is one of my favorite human beings on Earth." — Ryan Mahan

Hymn For An Average Man

"I was fooling around on this gorgeous piano in Adrian [Utley]'s parlor when this song occurred to me as a concept. I wanted it to sound like a record locked in a groove, to paint a picture of someone being stuck and trapped in a horrible situation that they're condemned to repeat, like Sisyphus or Prometheus. I like to think of it as free, indirect discourse, describing the recurring nightmare of a fascist. You see the people throughout history who supported these horrible regimes and you wonder 'how do they sleep at night?' Well, hopefully they have some semblance of a conscience that, no matter how much they try to drown it, haunts their dreams and keeps them up at night. This must have happened if we believe what Hannah Arendt said, that evil is perpetuated not by monsters but by 'average,' men. Let's hope so..." — Franklin Fisher

"I think this interlude represents the band's open attitude towards working with me. From very early on, they have been encouraging me to contribute beyond playing the drums, perhaps because they know they can't include everyone on every single song, but more likely because it fosters and reinforces this idea of us as a collective entity.

"This song grew out of an interstitial element of our live show, with me playing warped chimes and drones transposed to the drum pads from a phone recording made whilst exploring the redwood forests of northern California during our last US tour. Lee added and elevated my stuff with tape loops, bowed cymbal and sax which, for me, makes 'Bury Me Standing' feel like a mournful and resigned extension to 'A Murmur. A Sign.'" — Matt Tong

The Cycle/The Spiral: Time to Go Down Slowly

"I'd recently had an argument with my wife and in the aftermath, written her a letter. Before sending it, I heard an interview with Michael Stipe explaining how the lyrics from 'E-bow the Letter' were essentially a letter he'd never sent so I decided to steal his idea for this song. Hence, some of the coochy-coo language. But I'm also stealing from Marvin Gaye.

Otherwise, the song is about the cycle of violence, and there's plenty of loaded imagery there to point towards the obvious. The refrain in the coda is one of the first things Ryan and I ever worked on. It was about my parents' divorce." — Franklin Fisher

Well, if you've gotten this far, you read references to a lot of fascinating music you may never have heard of — so we made a playlist.