Accessibility links
New Mix: Music From 'The Big Sick,' Rhye, Protomartyr, More : All Songs Considered We open this week's essential mix with the sweetly melodic sounds of Michael Andrews and his score for the film The Big Sick. Also: the sensual sounds of Rhye, Protomartyr's existential rock and more. 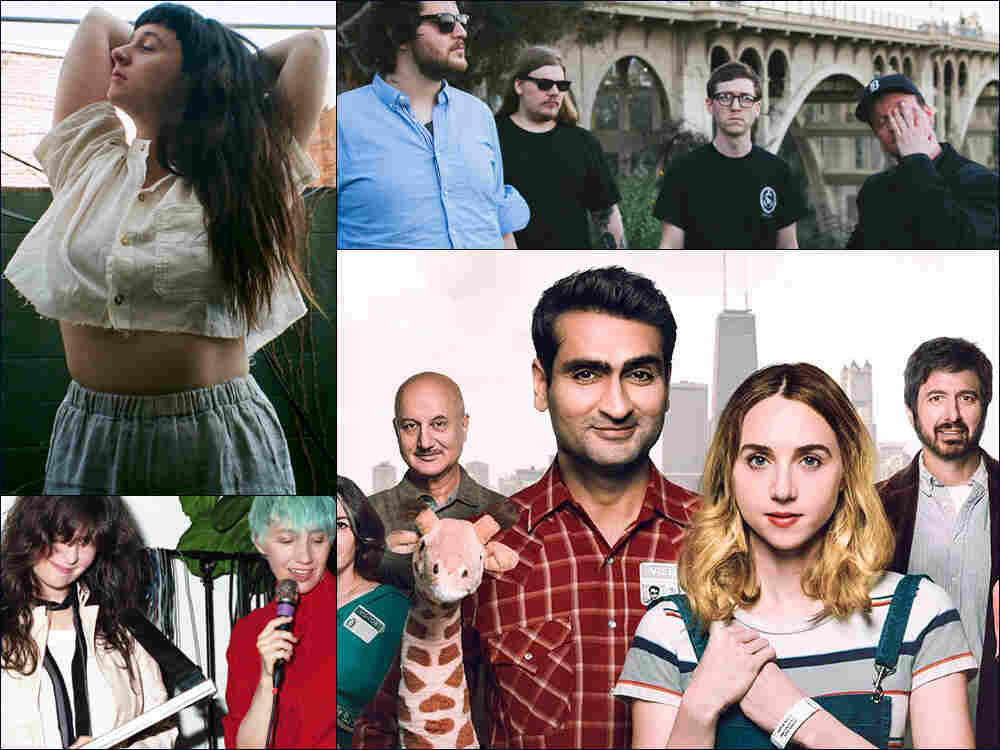 Clockwise from upper left: Waxahatchee, Protomartyr, billboard photo for the film The Big Sick, The Blow Courtesy of the artists hide caption

Composer Michael Andrews started writing music for movies back in 2001, when he scored the now-cult-classic film Donnie Darko (which included Andrews' haunting arrangement of the Tears For Fears song "Mad World"). His simple, brilliantly rendered songs perfectly reflected the movie's surreal narrative with moments that were both comical and creepy. Now he's back with a new score — and completely different sound — for the romantic comedy The Big Sick. We kick off this week's show with the sweetly melodic "Two Day Rule," a song that host Bob Boilen says sounds, appropriately enough, like a romantic relationship unfolding.

We follow with new music from a duo known as The Blow. Bob first became obsessed with their music when they released what became his favorite album of 2013. Now they're back with a followup called Brand New Abyss, a record of pulsing electronics and reflections on political and cultural upheaval.

Also on the show: The band Rhye is also back after a four-year break with the sensuous new song "Please;" existential rock from Protomartyr – along with a short conversation with singer and lyricist Joe Casey about the universal search for hope and truth in the darkness; Waxahatchee's latest album, Out In The Storm, finds singer Katie Crutchfield recovering from a toxic relationship; and NPR Music's Andrew Flanagan stops by to share the instrumental work of saxophonist Joseph Shabason, who has a new album that Andrew likens to "swimming with ankle weights."

Robin geeks out about his love for film scores with Michael Andrews' "The Two Day Rule," the opening cut to the soundtrack of The Big Sick. The Sundance-premiered film hit theaters June 23, and follows a second-gen Pakistani-American as he simultaneously manages family and romantic life. Andrews, who also scored Donnie Darko, deftly morphs a single melodic line from crushingly sad to exuberant and celebratory.

The Blow, duo Melissa Dyne and Khaela Maricich, write and produce their own brand of spare, poetic electronics. With Dyne on modular synths and Maricich's delivering natural, clever speak-singing, the pair has a sound that is both candid and easily connective. Maricich explains that "Get Up," from their latest project Brand New Abyss, is about "crushing capitalism," and everything she "used to love [being] demolished and replaced by a glossy new bank."

After more than four years, Rhye releases a soulful and seductive new single, "Please." Rhye's Mike Milosh explains that the profound human intimacy of the song wells up from the group's instrumental choices — such as their decision to record the piece entirely with live piano and percussion. This is Rhye's first new music since their 2013 full-length Woman.

In Aytche, saxophonist Joseph Shabason was looking to subvert instrumental virtuosity with a sound that is sedate but textured, dense, and expansive. In a combination of field recordings, steady, hypnotic and heavily effected saxophone lines and the minimalistic percussion of Phil Melanson, Achtye offers a sprawling instrumental reflection.

Protomartyr's leading track on their new album, Relatives in Descent, is both depressing and driving, taking inspiration from life in the twenty-first century. We talk with lead singer and lyricist Joe Casey about the inspirations behind "A Private Understanding" and how he manages to cover Heraclitus, Joseph Stalin, Donald Trump, and Elvis' search for the truth, all in one tune. The song captures the push and pull of understanding melancholy while still searching for hope.

On her fourth full-length record in five years, Waxahatchee lead singer and guitarist Katie Crutchfield reflects on the end of a turbulent chapter in her life. Crutchfield explains that after her previous full-length in 2015, Ivy Tripp, she felt exhausted and drained. "Brass Beam" is, in part, about carrying on with the simplest routines, even when you're down.