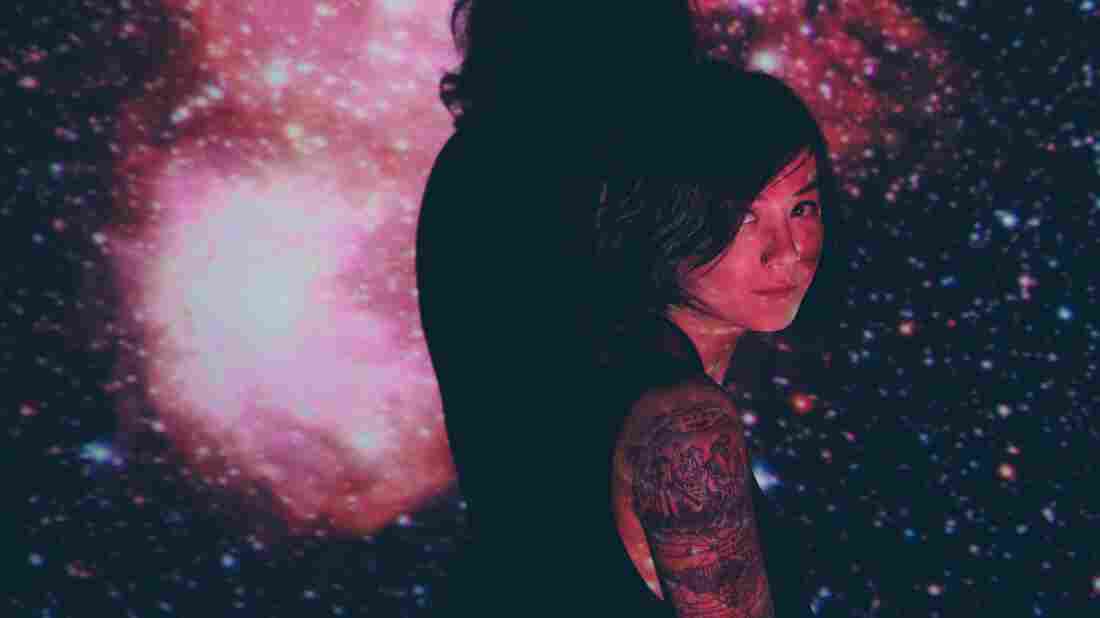 Japanese Breakfast's sophomore album, Soft Sounds From Another Planet, is out now on Dead Oceans. Ebru Yildiz/Courtesy of the artist hide caption

With a meandering, six-minute-plus sci-fi-sounding opening track, it was clear that Japanese Breakfast's Michelle Zauner was out to make music that was beyond the three-minute-pop found on her solo debut, Pyschopomp. The more I dug into Soft Sounds From Another Planet, Zauner's follow-up album, the more I wanted to know. There are references to robot love ("Machinist"), deep love ("Till Death"), a lap-steel guitar solo ("Soft Sounds From Another Planet") and the Grandaddy-inspired synth-pop of "Body is a Blade."

So we asked Michelle Zauner to walk us through her second album, track by track. It's a record that deals with the saddest parts of life, in this case the loss of her mom, as well as the magic of life — including her recent marriage to Psychopomp bassist Peter Bradley.

"There's an island in South Korea called Jeju that's famous for its female divers, [who are called] haenyeo. With each dive, many haenyeo can plunge up to 30 meters and hold their breath for over three minutes. They collect abalone, conch, sea urchins and oysters and sell them at the marketplace. I really admire the haenyeo -- that lifestyle, of regimen and endurance, was inspiring to me, particularly during a time when I was touring a lot. I think this song is also partially about feeling guilty about being a touring woman, and the fear that people were judging me for putting my career above having a family.

"I really wanted to have a long song start off the record, since Psychopomp was so short, and usually my songs are quite short pop songs, in general. I really wanted to create that same meandering, interlocking guitar feel — like that Deerhunter song 'Desire Lines.'"

"This was another song I revamped from my lo-fi tape American Sound. I wrote it about someone I dated who made me feel like I wasn't cut out for my own music career. It's sort of about that really ugly moment when you try to do something sexually wild to save a relationship, only to make it more painfully apparent that it's not going to work.

"The second verse has a quote from something I read about Tammy Wynette. I really fell for Tammy about a year ago. I love the sort of tongue-and-cheek melodrama of her songs. I read that when she left her first husband to pursue a career in music, he told her 'dream on, baby.' Years later, after she was famous, he attended one of her shows and asked for her autograph. She signed it 'dream on, baby.'"

"This was the first song I wrote for the record. It's about a woman who falls in love with a robot. It started with the synth line, and I had this idea for the spoken word, and sort of like a hip-hop skit in the middle. I got really shy about it at first, but Craig Hendrix, who co-produced the album with me, really encouraged me to keep going. This was the beginning of Craig and I working together on the project. Working with him was so easy and fun and inspiring, there was no way I was going to work with anyone else on the rest of the album. He had the brilliant idea to incorporate the vocoder harmonies. I forget who came up with the idea to do the auto-tune... I had done a cover of Cher's "Believe" around this time, so that may have been its beginning.

"The transition from 'Road Head' is the sound of the Juno 6 being kind of broken and fuzzing out. I think it sounds kind of like the ocean and it gave us the idea to add some samples of wind to the introduction of the song, like I'm on a lonely windy planet."

"I love incorporating instrumental tracks onto albums. I think it just is a nice way to help a record breathe. It's some sort of reversed keyboard loop. The weird little bleeps are sounds I made with an OP-1. I wanted it to sound like two satellites talking. They kind of remind me of Wall-E."

Soft Sounds From Another Planet

"This started as 'Day 30' from my album June, which was a lo-fi tape I made in June 2014, where I wrote and recorded songs every day for the month of June. I wrote this song about a past partner who was very jealous. I couldn't understand why this person was so vicious to me all the time. For the album version I added some instrumental sections and an additional chorus and verse, and I think the song became more about what I've endured since then, and how I could never let anyone treat me that way again.

"There's a lap steel solo — on a lap steel I was making my husband donate because he never used it. Craig happened to see it in the car and claimed it last minute. I find it hilarious it actually made it's way on the record."

"This song started as "Day 6" on June, was revamped and appeared on Little Big League's Tropical Jinx, and then revamped again for this record. I just hated the way we arranged and produced it in Little Big League, and I still really loved the chorus lyrics and the way the melody lifted, so I wanted to rearrange it. Craig is wonderful at coming up with vocal harmonies. I always joke that Craig sings like a Disney Prince, his voice is just so full and objectively beautiful, I think it makes my squawk sound a bit prettier when we sing together.

"Actually I think we arranged and recorded this mostly in one day. We tried to redo the drums and vocals, but we were so attached to the original that it just didn't sound right when we put the new versions in. So the vocal is actually the scratch take, just one take I think recorded on a Beta 57."

"There is a bar in South Philly, called 12 Steps Down, where I met my husband. I was seeing someone else at the time, but I just knew I needed to be with this person. So it's sort of an apology song to them. It's nothing personal, I just found the love of my life and I've gotta go now."

"I wrote this song about the bass player of Little Big League. He'd been offered a better touring gig and so he sat me down at my kitchen table and told me he had to quit the band because this other band were going to be 'Jimmy Fallon big.' At the time it felt like losing a brother, and there was this shame, feeling like I was never going to get there myself. Funny enough, he now plays bass in Japanese Breakfast! Now we just need to play Jimmy Fallon and the cycle will be complete!"

The Body Is A Blade

This song is about trying to figure out how to be a good person after something really terrible happens in your life. It's about disassociating from trauma and relying on your body to physically keep pushing forward in an attempt to survive. I guess I was begging myself to not to fall into a deep depression after my mom died. You're alive, you have to keep moving. We used the Juno 6 for that fluttery keyboard sound that's all over the record, which I love because it reminds me of Grandaddy."

"I think this song is my favorite. It's a love song, a thank-you to my partner for standing by my side through to the end of a really painful year. It's a long list of awful things life is full of — death, genetic disease, anger, and how you never really know how much someone loves you until you find them at the end of this long tunnel of painful things you endure, waiting for you to come through to the other side. I think the title is funny. Like we are all just biding our time, tilling towards death.

"I wrote it in the studio while, I think, Craig was comping drums. I started with the keyboard line and almost stopped because I thought it sounded too cheesy. Craig encouraged me to keep going by telling me it reminded him of The Carpenters. That's pretty much the highest compliment I can think of so I kept going, and wound up really loving it. Then Craig suggested we throw in a key change at the end and we added some more 'Disney-prince' harmonies to really polish the whole thing off."

"This was the last song I wrote for the album. A ballad about returning home after a long tour, waiting for your someone to come home. It's also about the confused desires you feel for someone you once loved, and coming to the realization that it's not actually the person you miss, but who you were before. A time when you were younger and felt more and didn't think so much about death all the time."

"This was originally going to be the title of the record. A lot of the songs are about matrimony and finding someone to love you through the really ugly parts of life. It's a sad but hopeful reprise.

"Shout out to Michael Johnson for hooking us up with the tubular bells at UArts. This was the last thing we recorded for the album and afterwards Craig and I had a glass of champagne at the Ritz, not knowing it would cost $25 a glass. We did get to see David Spade in a Bass Pro baseball cap there, which made it kind of worth it."