Accessibility links
Seeing Aretha Franklin Sing For The Last Time : All Songs Considered "This is my last year in concert," Aretha Franklin said earlier this year. For a fan who has seen her more than a dozen times, this meant one last chance to witness the queen of soul in person. 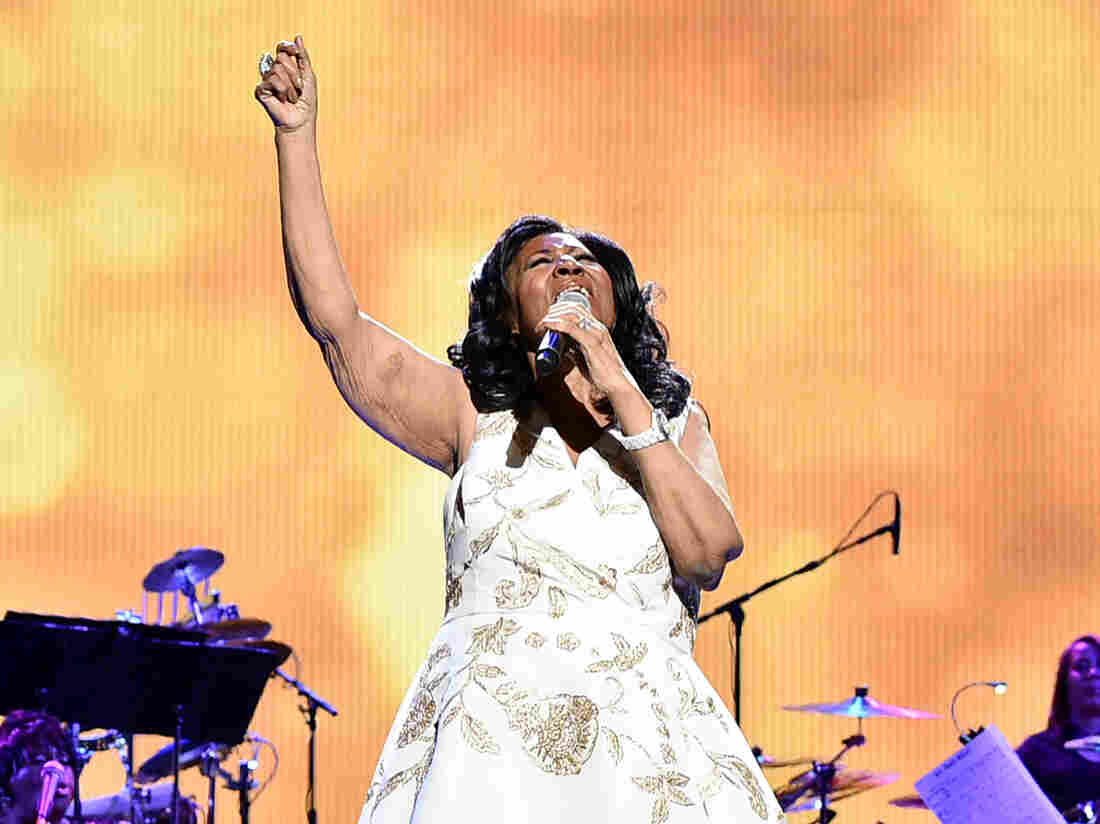 Aretha Franklin on stage at the "Clive Davis: The Soundtrack of Our Lives" premiere at Radio City Music Hall in New York City in April. The singer has said she will retire from performing live this year. Theo Wargo/Getty Images hide caption 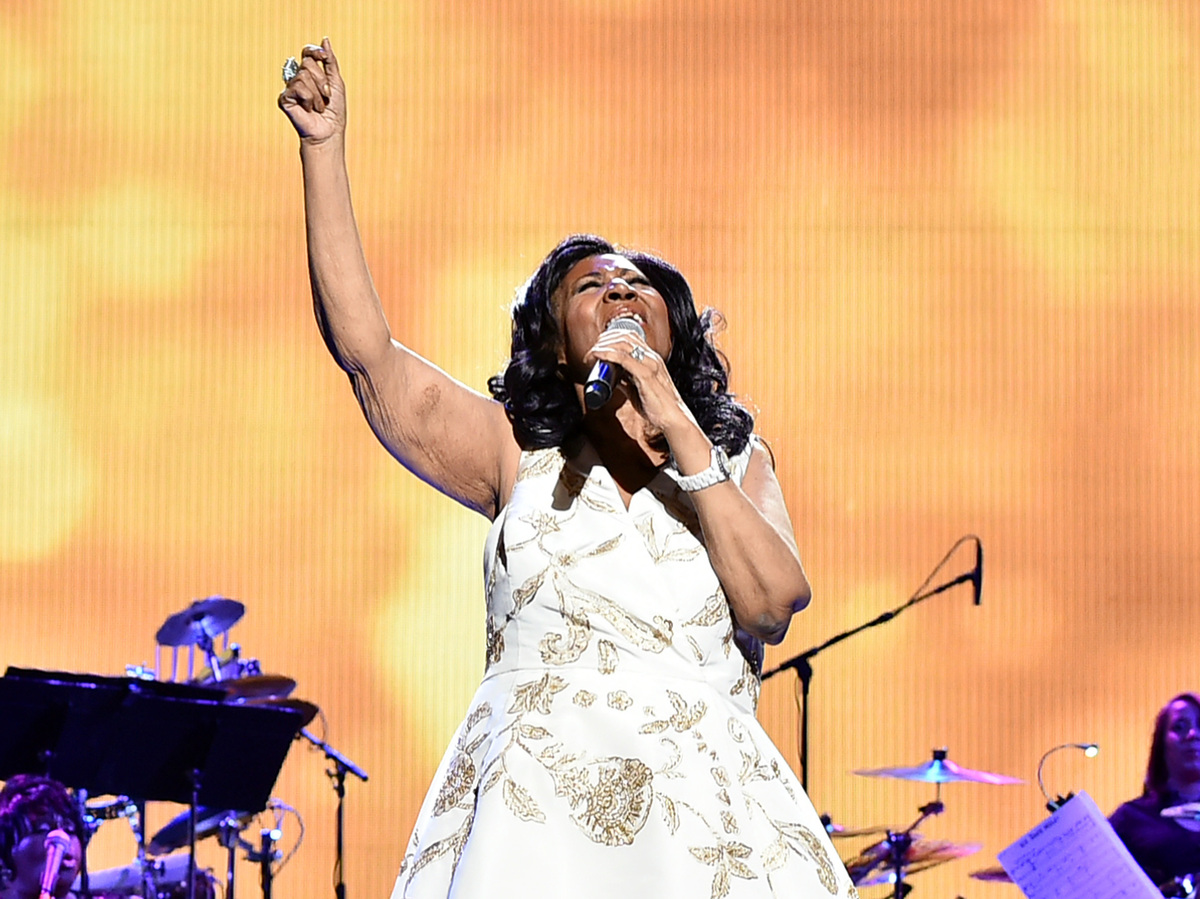 Aretha Franklin on stage at the "Clive Davis: The Soundtrack of Our Lives" premiere at Radio City Music Hall in New York City in April. The singer has said she will retire from performing live this year.

She walked on stage on a cool summer evening, wearing a mink jacket over a glittering gown. She stepped a little gingerly, as if she were stiff or feeling some discomfort.

She waved to the audience and then unleashed her voice: "Like a warrior that fights to win the battle ...." The sold-out crowd roared as she sang the No. 1 hit she recorded in 1987 with George Michael, "I Knew You Were Waiting (For Me)."

This is Aretha Franklin, age 75, in concert at Wolf Trap National Park for the Performing Arts outside Washington, D.C. It was the 17th time I've seen her sing. And probably the last. Earlier this year she announced, "This will be my last year in concert. This is it."

The dates she's set up for her farewell tour have been iffy. She's canceled several concerts this summer, citing "doctor's orders." She was diagnosed with an illness in 2010, widely rumored to be pancreatic cancer. She underwent surgery, disappeared for some months, re-emerged after having lost 85 pounds (according to her reports) and went on to make some wonderful music.

With her recent track record, I worried that she'd break our date (well, she technically didn't know it was a date, but you know how fans are).

But she did make it to Wolf Trap. And she was in great voice for the opening numbers, sticking to her still vital and velvety middle range, investing the lyrics with intimacy and issuing wordless moans that captured the pain and passion of the blues. She began "Chain of Fools" with a piercing "wo-oh-a-oh-oh" while sitting in an easy chair as a way to husband her energy.

Hearing that voice once more took me back to the first time I heard her sing. I was a teenager. This mighty female roar came out from my tinny transistor radio and delivered a spelling lesson: "R-E-S-P-E-C-T. Find out what it means to me." Her voice was rich and soaring, powerful and passionate. I had never heard anything like it. And I fell in love with that voice. But as a sheltered suburban Caucasian teen, I couldn't truly appreciate what a daring demand she was making: a woman commanding sexual respect, an African American telling the white world to give "me my propers."

I became a devoted fan. I loved every song she did. I couldn't wait for the next single (they dropped every couple of months back in those days). Each song was a lesson in how to make music: from the haunting beauty of her confessional "Ain't No Way" to the strident demand to "Think" about what you're trying to do to me.

I understood for the first time how music wasn't just a series of notes to be played or sung (which is how I dutifully played piano). It could be deeply personal, it could touch a person's heart and soul.

I saw Aretha in concert for the first time in the early '70s. She wore a sparkly gown, just as she did in Wolf Trap. Her music poured out of her like a rushing river. She played piano for many numbers, her fingers dancing over the keyboard, creating all the instrumental support she ever needs. She wore her hair in a short afro — a revolutionary style at the time. Years later, I interviewed her and told her how much I liked her natural look. "Wasn't it gorgeous?" she said.

As the years went by, I remained a loyal fan. Okay, obsessive. Even when her musical choices weren't inspired. Her disco album "La Diva" had a rushed, un-Aretha like feel, because one of her great gifts is knowing how to, in her words "Aretha-ize" her music. Yet even that album had the ebullient "Honey I Need Your Love," which taught an invaluable musical lesson: When in doubt, go back to roots. A gospel piano backing and punchy horns enabled her to make a joyful noise.

And as I went looking for love and didn't always find it, I gained a deeper appreciation for the way she preached about romance. As she put it in the subtitle to "Dr. Feelgood," "love is a serious business." She used her vocal genius — the warm and supple voice, the soaring high notes, the gutsy growls, to put it all out there.

My favorite live performance had nothing to do with love. And I couldn't even see her sing, I just heard that voice, wafting above my head like a heavenly cloud. It was in 1993 at a memorial service marking the 25th anniversary of Robert Kennedy's assassination. The setting was Arlington National Cemetery. She sang "America the Beautiful," slowly and purposefully, tinged with pride and also a hint of sadness, perhaps reflecting on the ironies of praising a country that had oppressed her foremothers and forefathers. As I stood among the tombstones of fallen soldiers, I felt a chill run down my spine.

Her open emotions also helped me let my feelings out. In the early 2000s, when my wife faced breast cancer, I listened to "Drown in My Own Tears" and Aretha's open declaration of sorrow gave me license to shed some tears myself.

My wife is today in good health, and on Saturday night, there we were, watching Aretha work her magic. Critics sometimes blithely write that she sounds better than ever. That is not true. Her vocal instrument is three-quarters of a century old. As the concert progressed, her voice sometimes faltered. But her spirit did not. She improvised an impromptu gospel-style verse about her battle with her unnamed illness, she sang that she "looks back to the year 2010" when she had to kneel in prayer, the year she faced her medical crisis — and "this is 2017 and I'm holding on."

At Wolf Trap that night, she sang about half-a-dozen songs then left the stage for an interlude that lasted about 15 minutes, presumably to shore up her strength. The band played a Latin-flavored number. Horns blared, the female drummer was on fire. But without Aretha in the spotlight, the music had lost its soulful center.

During that instrumental break, the giant screen hanging over the stage played a clip showing "Round 15" from a Joe Lewis fight. It seemed an odd choice.

Five, 10, maybe 15 minutes went by. And then "like a warrior who fights," Aretha came back and continued to make glorious music.

And she shared her earthy sense of humor as well. An audience member called out, "Love you, Aretha." She replied, "Okay, love you back." Pause for comic effect. "Where are you sitting?"

As the evening came to a close, she told the audience this is her 54th year in the business. (Which is, typical of Aretha, not entirely accurate since she recorded her first gospel record at age 14 and signed with Columbia records in 1960.)

And she bid us farewell, saying that with luck, "I'll see you next time."

Even if this is the last time, I didn't feel like it was goodbye. The next day, I went for a long run and listened to nothing but Aretha and was struck by a line in a jaunty song from her less-soulful but lots-of-fun 1980s period. "Take Me With You."

"I just wanna be in your head like a melody," she sang into my earbuds. And there she will always be.