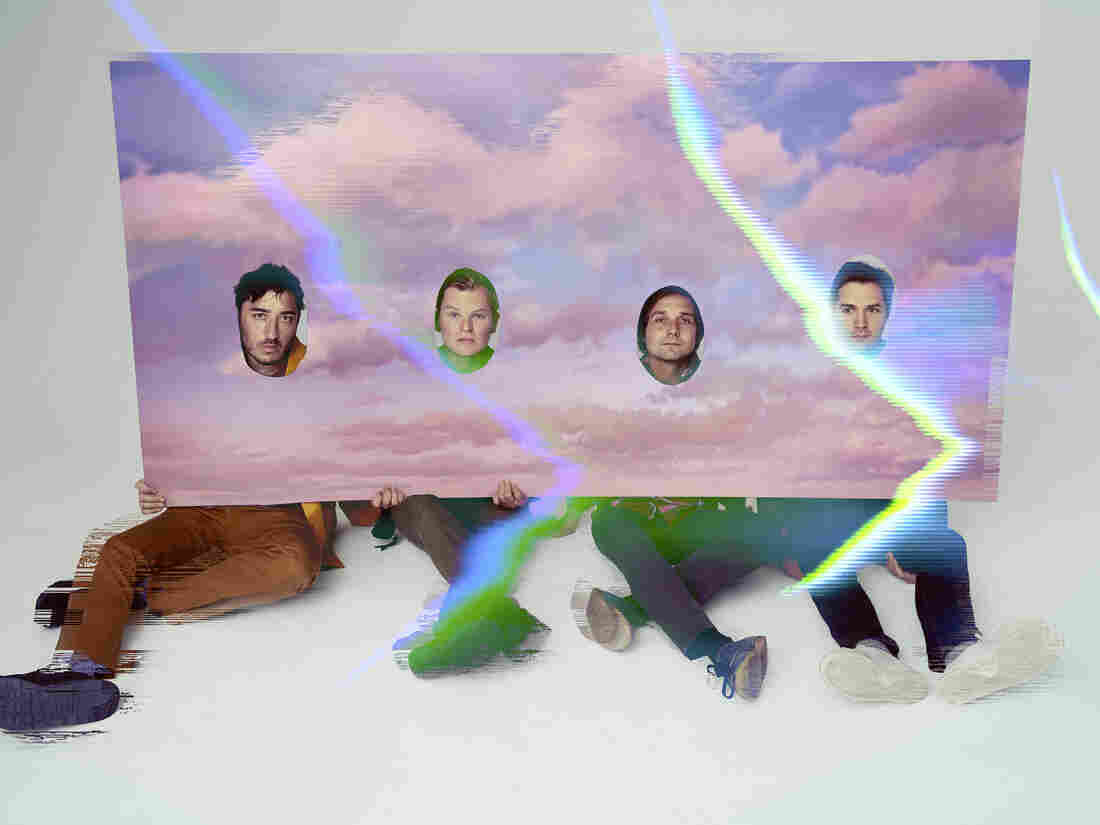 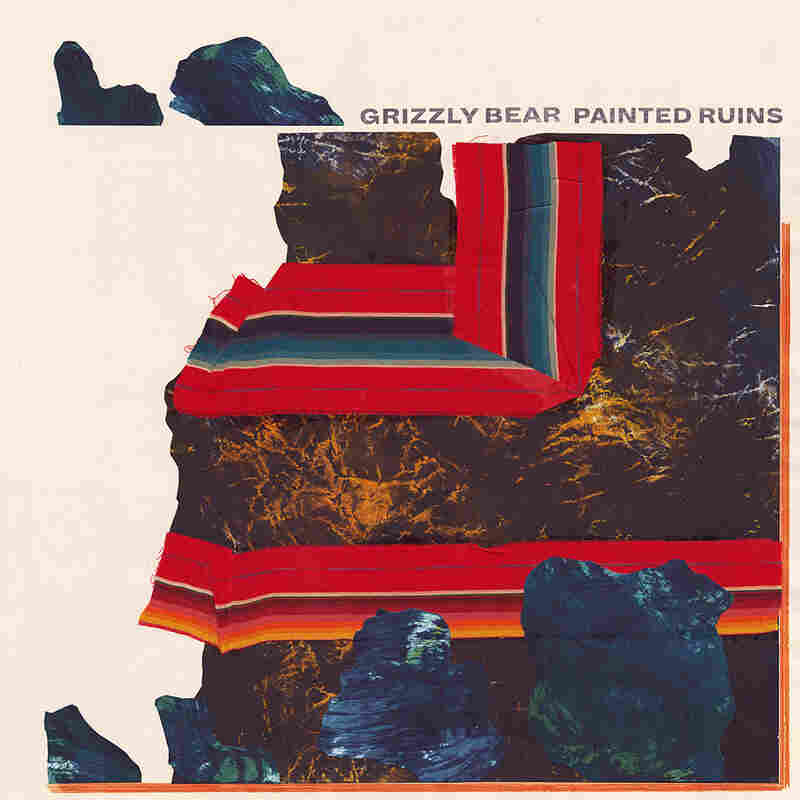 Grizzly Bear's new album, Painted Ruins, isn't overtly political — it isn't built on any easily identifiable observations of a troubled world. Still, at times it seems to speak directly to events that have unfolded in recent weeks, from the saddening violence in Charlottesville, Va. to political tensions with Russia and North Korea, thriving as it does on examinations of paranoia and fear of the unknown, of loneliness and isolation.

But the album is, at its core, a personal one, with singer Ed Droste, guitarist/keyboardist Daniel Rossen and bassist/producer Chris Taylor all penning confessionals of their own emotional chaos, faults and missteps in relationships, and ultimately their perseverance in life.

For the release of the Painted Ruins, Droste, Rossen and Taylor shared some of the stories behind their first new album in five years, how the songs came together and what they mean for them.

"This one started as a slightly tongue-in-cheek song about trying to keep track of my wily hound dog while hauling firewood on an old ATV (the trx-250) in remote upstate, New York. I felt like it captured a little bit of the absurdity and genuine loneliness of being a cosmopolitan interloper in the countryside. I also liked the idea of glamorizing a trashy ATV, as if it has some significance beyond being an old, gas-guzzling deathtrap." – Daniel Rossen

"This song happened late at night with Chris Taylor and I in Crestline, Calif. We thought we were calling it a night, but [Chris] came up with a great riff and the melody followed. We weren't sure it would see the light of day until Dan [Rossen] came in with his gorgeous chorus. There's definitely a sense of regret, which is quite apparent with the first line, 'I made a mistake,' but there's also a sense of owning your mistake and taking responsibility for it. I don't want to blame one party in the conflict and know full well much of the strife and turmoil being referenced lays on my back as much as anyone else's." – Ed Droste

"[Percussionist] Chris Bear started this one with the strange rolling drum feel and chord change at the top. Eventually I took it and wrote a melody and lyric and we built it from there. Without going too deep into it, the lyric was kind of a meditation on internal chaos that mirrors the chaos in the outside world. [But] that line ['It's chaos but it works'] is not a reference to the political chaos we are currently dealing with. It was meant in more human terms and referring back to the previous line in the song , 'living in a pile,' living in ruin or disarray. 'It's chaos but it works' is meant more like, 'It's a mess, but it has to be good enough.' We are adaptable. We sometimes live in abject conditions because that's all we have and we make it work. It ended up sounding a bit more flippant than I thought it would." – Daniel Rossen

"This song all started with a beat that Chris Bear made and left on the Dropbox. [Chris Taylor] then put bass and chords over it, followed by a melody I came up with which resulted in the first half. Then in classic Grizzly Bear fashion, the second half came together when Dan and Chris Bear came to Chris Taylor's studio and they put together the rest, and the song was finally born!  This is actually a song referencing both the past and the future and two separate relationships. I like the idea of the long instrumental section being the passage of time before I move on to addressing someone new." – Ed Droste

"This song is the oldest demo we passed around and [it] went though many forms. [It] started with the bouncy guitar riff and nothing else, submitted to the band as raw material. Chris Taylor sped it up and put down a bass riff and I put down a melody and over time we kept passing it around, working on different melodies and rhythmic approaches, different lyrics. We pretty much put this song through hell until settled into its final form." – Daniel Rossen

"It's hard to really verbalize an answer here because where 'the end' of the process exists is truly subjective. I can feel a song is done when it has its own life and movement to it and moves me without me feeling inclined to make it do something it's not doing." – Chris Taylor

"I liked the push and pull of this chord change. It reminded me of the push and pull of adrenaline, panic and calm. The lyric veered in many directions and was never really finished, but was a bit about the panic of massive decisions made in an instant, loading up a moment with the stress of seeing two divergent fates and not knowing the right way to go." – Daniel

"This one started with a Wurlitzer and drum riff that Chris Bear shared with us. Ed and I riffed on this one in Santa Fe while he was visiting me and worked on some melodies, and it came into it's more fleshed out thrashing form with Chris Taylor and Bear's guidance when we were recording the record in upstate New York." – Daniel Rossen

"Kind of hard to explain. It started out with the odd collision of moods between the verse and chorus – the woodsy, dark energy of the verse running up against the overly slick energy of the chorus. It's kind of grotesque in a way that was appealing. The lyric grew from there, a collision of country and city attitudes; paranoia versus the desire to connect with people different from yourself; trying to see the world from someone else's eyes. I can see how you might want to read even more into some of those lyrics [like], 'our fears that make us cruel,' now that that's particularly visible and on our minds. As for the song, I would say 'no.' [It's] still just what it is. I think of all these lyrics as human, day-to-day impressions that can reflect some of the tense energy out there around us, but not directly and not always intentionally. The music informs the lyrics and the lyrics inform the music." – Daniel Rossen

"This song started with Dan and I in Santa Fe sitting by a fire during a snowstorm. It's a rumination on the inevitable fading that happens between two people post separation, even if they live right next to each other." – Ed Droste

This is "a song that began while I was living in Berlin and is my first time singing lead vocal in the band. Chris Bear and Dan helped flesh out the instrumental in some new directions resulting in a swirling, vibe-y track. It's about people's relationships to their vices and how we seem to all have them, and what can really be done about it, if anything at all sometimes." – Chris Taylor

"This started with a guitar riff that Chris Taylor had and we fleshed out together on a writing retreat in Big Sur. The original version of this song was drastically different and sunny and took a major twist during recording where it was reimagined! [It] would be interesting to someday release the original version just to show people how different the versions are." – Ed Droste

"It began as a guitar and bass riff I was messing with that had a more Brian Eno 'Here Come The Warm Jets' sort of sunny, strange rock, and eventually Ed put a melody over it. Later that guitar part was Dan reworking it to fit the new darker more minor chord interpretation that Chris Bear worked under Ed's vocal melody. The song then took on the kind of tone of dread it has now. I guess that vibe was more appealing to everyone in the band than the initial vibe. We all have to find a way into the track vibe-wise to really engage and flesh it out." -- Chris Taylor