Accessibility links
Zola Jesus Reveals The Dark, Remarkable Stories Behind Her New Album, 'Okovi' : All Songs Considered The singer offers a candid breakdown of her latest album track by track, with stories about serial killers, suicide and how she emerged from the darkest period of her life. 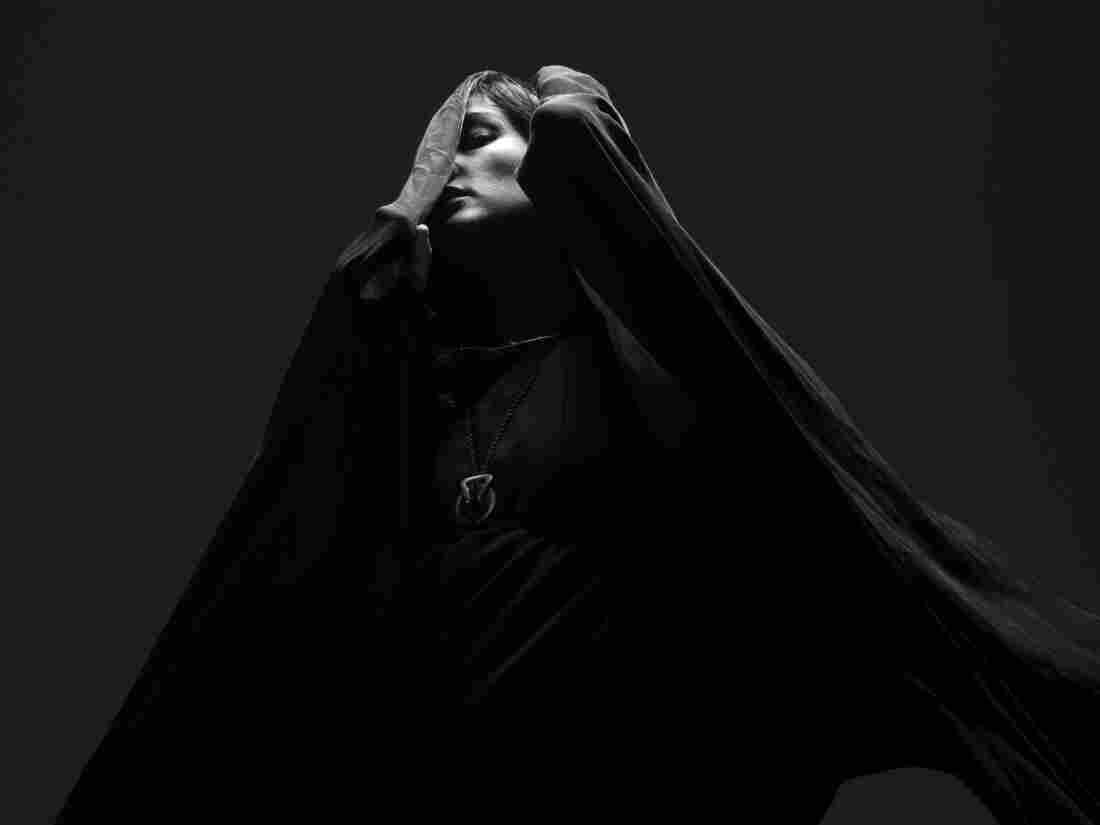 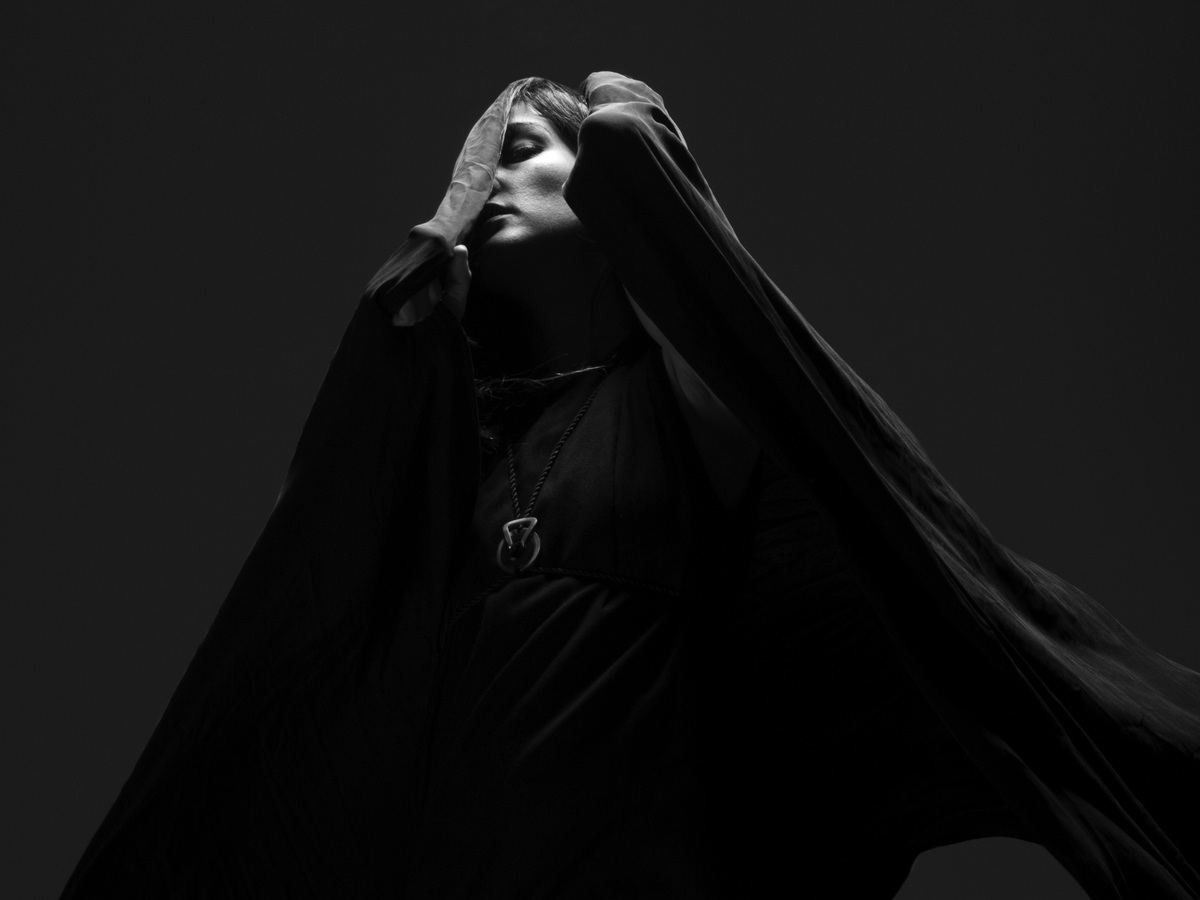 Tim Saccenti/Courtesy of the artist

Okovi, the latest full-length from Zola Jesus, is a monstrously tortured album, built with densely layered grief and pain. Nika Roza Danilova, who's been writing and recording as Zola Jesus since releasing her debut in 2009, bares her most vulnerable thoughts and feelings as she sings about serial killers, suicide, crushing depression and fear. At times, even Danilova admits the songs are hard to hear. But Okovi is, ultimately, the story of how she healed and emerged from the darkest period of her life. It's an album of empowerment and hope. "At one point it occurred to me that your worth is earned from your ability to endure," she says. "Your strength is built through suffering."

For the release of Okovi, we asked Danilova to share some of the stories behind her new songs and how they came together. In this Track By Track breakdown of the album, she reveals how she found euphoria in her most painful moments, her love of Russian poetry and why she decided to lift a long-standing ban on guitars in her music.

"Doma means home, or 'at home' in Russian. I wrote this song after I moved back to the land where I grew up. The past few years I had been struggling with a deep depression. I was desperately craving roots and a sense of belonging. It wasn't until I came back to Wisconsin that I finally realized my roots were exactly where I left them. I wrote this song in the style of a hymn, partially inspired by Eastern European village folk songs. It's this music that reminds me so much of home, not just my physical home, but of ancient roots."

"'Exhumed' was one of the first songs I wrote after suffering from a sadness that made it impossible to create. Finally, I was beginning to wake up from my stupor. I slowly started to feel things, however angry, resentful, violent, or nihilistic. But at least I felt something. I put that intense emotion into this song, which took over a year to finish. It wasn't until the end of recording the album that I was able to take the song to where it needed to go. Even though it's not very indicative of the entire record, it felt like the right song to put out as the lead single. For me, this was the awakening that made this record what it is."

"Since moving back to Wisconsin, I became transfixed with learning about the stories of serial killers. I started to do thought experiments of what it would feel like to be a killer's victim. What would I feel in those last minutes before my life was taken from me? In this mindset, I felt so many conflicting emotions: resentment, empathy, masochism, grief. Channeling these emotions into 'Soak' made me step back and see how much it reflected my own journey trying to get through my darkest moments.

"During one verse, I sing 'born into debt, a line of no request, pay what I can but the rest I have no chance, so I pay nothing instead.' I feel we are all born with a debt. To be given life is a privilege, and we must do something with these bodies before our time ends. But often I feel resentful of my inability to fully cover my dues, and to contribute as much to the world as I feel I need to. Sometimes I think I'd rather do nothing than only meet halfway."

"'Ash to Bone' is about the haze of depression. For so long I felt myself falling backwards into a thick fog, with everyone I love on the other side. Meanwhile, I'm floating in this netherworld, with only a faint comprehension of reality that was distorted, muffled and far away. I was powerless and stuck in the kind of dream where you're trying to scream but you have no voice and no one can hear you.

"I fleshed this song out in Los Angeles and, on a whim, I asked percussionist Ted Byrnes to come in and contribute to the track. That's what you hear towards the end, mixed with Shannon Kennedy's subtle chaos and waves of double bass performed by Julia Sonmi Heglund."

"Someone very close to me attempted suicide last summer. At the time, I was stranded at a cabin in the woods. I couldn't reach them. I panicked because I needed them to know how important they were. I did the only thing I could at that moment. I wrote this song for them.

"'Witness' is purely orchestral, which was a conscious choice to prevent the song from being too rooted in a temporal context. It felt right that the song should be timeless, because this struggle against death has been something humans have faced for as long as we've been conscious.

"Writing this song was both very easy and very difficult. There was no editing, it came out exactly as you hear it. But at the same time, singing those words for the first time was excruciating."

"A couple weeks after this person attempted suicide, they tried for the second time. It was horrific. This song is incredibly literal and personal. It's hard to talk about or try to explain beyond what's written in the lyrics. I enlisted the help of James Kelly (WIFE) to flesh out the production. I didn't feel like I was able to take it where it needed to go. Maybe because it was too hard to step outside of my firsthand experience. He did an amazing job at sculpting the mood I was after, which attempted to sonically capture the atmosphere of those few horrible weeks.

"It is tragic to watch someone you care about so much go through physical and emotional pain. The empathy for their struggle filled me with an unbearable heaviness. The music helped me to make sense of it, but at some point it became very hard to disassociate the catharsis and look at the song from any sort of technical standpoint. To this day it is a hard one to listen to or perform."

"Originally, this song was written as an experiment in making ambient music, which I love. I used to make interludes all the time that didn't really go anywhere and were more just mood pieces. I remember the song started with rain. It was pouring outside, so I took my recorder and walked around my woods recording the sound of the rain. Then I continued adding layers, either of jangling keys, little noisemakers I had lying around, and my Russian zither. It was all very organically produced. After the piece was built up, I began to hear a melody develop in my head, and so the song was born.

"'Veka' (which means 'centuries' in Russian) was inspired by Anna Akhmatova's poem 'Is This Century Worse Than Those Before?'. I recited the poem in the beginning of the piece. The lyrics were written about my own questions of what it means to have legacy, both on a personal and species level."

"'Wiseblood' is the oldest song on the record. I wrote it a couple years ago. It's an open letter to myself — maybe a bit of a pep talk. Back then, I was so tired of failing, so sick of feeling useless. I didn't feel like I had any meaning or power within me. But at one point it occurred to me, that your worth is earned from your ability to endure. Your strength is built through suffering. I started to see a thin light through the darkness. As an experiment, I made this song on my bed. I used to exclusively write music on my bed with all my gear laid out in front of me. Maybe it was leaving the desk that let me relax and tap into a sense of freedom I so desperately needed to reclaim."

"'NMO' means 'Not My Own.' This was a sonic experiment I made and liked enough to keep. I don't know why I started singing 'I am not my own.' It was an automatic phrase that came out without thinking about it. But in reflection it felt like a snapshot of what I was feeling subconsciously. I thought it was important to have moments of breath on this album. In the past I tried to jam pack as many songs onto a record as possible, but lately I have been much more interested in the pauses between songs."

"This song was written in the aftershock of anger and depression. Even though I'm better than I was before, I still battle my demons on a daily basis. I have been so confused by the idea of legacy. Why are we so fixated on leaving things behind? Why do we feel like we need to have purpose? I'm constantly trying to open up and challenge the lenses I'm viewing my life through. But nothing ever seems to change. So many people around me are asking themselves these same questions, terrified they will die without having done enough in their life.

"This song really came to life with help from Alex DeGroot, my co-producer on this album. At first, my demo was very crude. I appreciate how we took those raw elements and instead of making it into something slick simply built upon them. This was the first experiment of putting guitar on the record, which in the end I'm really happy about. I outlawed guitar up until now because I never felt like I could do anything with the instrument that wouldn't just sound like rock music. But I kept pushing Alex in the studio to get more amorphous, especially in that second verse when the guitar oscillates between the pitch and becomes just a tuneless blanket of sound. As a sound source, I'm excited to play with guitar in my music, to see how far I can remove it from its original archetype."

"I wrote this song at a cabin, stranded with my thoughts, stuck in limbo, while those around me were caught in their own purgatory. To straddle life and death, happiness and sadness, to become a prisoner of your own mind. Is there any escape? There is hope in finding euphoria in our darkest moments. Because when you close your eyes, the darkness is so black that it eventually becomes white. And as pain digs deeper, it pierces into pleasure. That's transcendence. That's the essence of being alive. I wrote 'Half Life' thinking about the transcendental byproduct of suffering.

"This is one of the few instrumental songs I've ever written. It was exciting, novel territory. It makes me feel proud in a unique way. It reminded me of how orchestral music can be evocative without being explicit. I struggle with this a lot as a singer. My voice is my main instrument. But sometimes I hate how reliant the voice is on words. My favorite music is often wordless, and instead of being told how to feel, the musical qualities instigate it. I'm very interested in exploring this further and continuing to experiment with musical abstraction."