Accessibility links
Rostam Lifts The Curtain On His Stunning New Album : All Songs Considered With Half-Light, the former Vampire Weekend producer and multi-instrumentalist has released one of the year's most arresting albums.

Rostam Lifts The Curtain On His Stunning New Album

Rostam Lifts The Curtain On His Stunning New Album 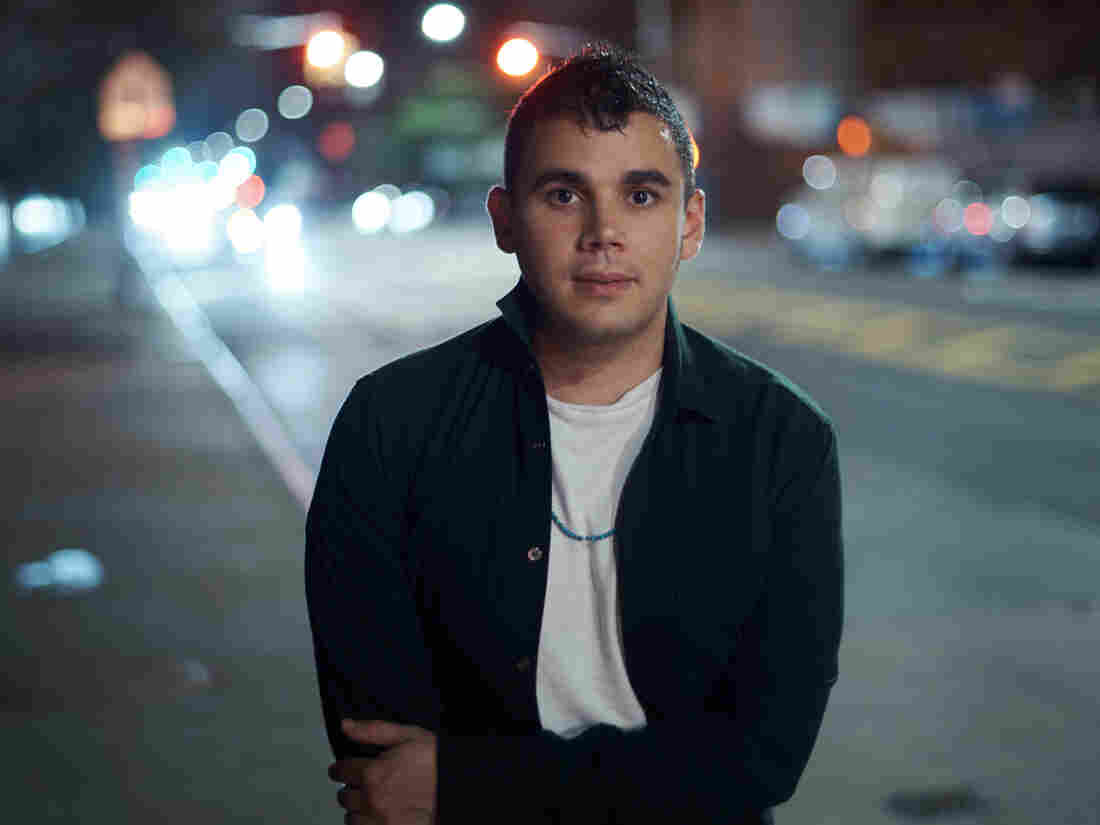 Half-Light, the debut solo release from former Vampire Weekend producer and multi-instrumentalist Rostam Batmanglij, is one of the year's most arresting albums. Its breathtaking choral and string arrangements, idiosyncratic beats and intricate wordplay make it practically impossible to hear without giving it your undivided attention. Moments of profound beauty give way to a kind of sonic chaos and wonder that can leave your head spinning.

Batmanglij, who writes and records as Rostam, could never be accused of making overly simplistic or obvious music. During his ten-year run with Vampire Weekend (he left the band in early 2016), he steered the group in always surprising directions, helping to reshape pop music with West African guitar licks crossed with unusual polyrhythms and joyful melodies.

As a solo artist, Rostam's songs are more like collages about ideas and feelings than linear or story-driven narratives, so he's often reluctant to dig too deep into the specifics or any particular inspiration behind them. One recurring theme on Half-Light is denial — of identity, of circumstances, of the past — with elusive, shifting perspectives and points of view. But it's ultimately a labor of love, driven by instinct and what Rostam told Rolling Stone was his need "to write the most complex music that anyone could possibly sing on top of."

To mark Half-Light's release, Rostam here breaks down the album track by track, explaining everything from his love of ancient Persian sounds to the complicated emotions that informed much of the music and why it's important to trust the subconscious mind.

"This song is built over a sample of a choir singing the round, 'Sumer Is Icumen In,' from 13th-century England. You could translate that song's title as 'summer is a-coming in.' Before it had a melody or lyrics, this was a collage of sounds in Ableton that I knew would become the first song on the record. Somewhere in the back of my mind I knew I wanted to make an album that interacted with the history of music.

"I was thinking about how we measure parts of our lives — in relationships, seasons, sound. I was trying to get to the feeling of coming home from a trip."

"The melody and lyrics for this song were originally written over completely different music. At some point I realized it was nearly in the same key as another beat I was working on that had a kind of T-Rex vibe to it. I put them together, and the song came out of marrying those two things. Though I played piano and electric guitar for the song, I used my playing to create measures of music that I could loop and layer with the sound of vinyl crackling. The idea was to reverse engineer the sound you get from sampling an old recording and building new music out of that.

"'Bike Dream' is the only song on this album that was mixed by Dave Fridmann. He was someone I reached out to half a decade ago and had a back-and-forth with. At the very last stage of making this record I reached out to him again, kind of like, 'Hey Dave, remember me? I've got this song I think you should mix,' and he was like, 'I remember.' And then the mix happened within a matter of days.

"I don't want to explain too much about this song lyrically, but I will say it's about wanting the person you're with to be two different people, maybe two different kinds of people."

"I kept thinking of this as my '70s song. It lived as a piano-and-voice memo on my phone for a couple years before I decided to finish writing and recording it.

"[Singer] Kelly Zutrau was staying in my backhouse and we were working on new songs for her group, Wet. At the end of one session I was like, 'Hey, Kelly I've got this almost-finished song. Do you think you could help me figure out the ending for it?'

"The piano and the first three verses were recorded but I think the version I first emailed her had just drums and chords where there is now a guitar solo. I loved the shift in perspective Kelly brought to the song lyrically, though we never had a conversation about what the song was about. I love that she brought her own experiences to it.

"To me the [it's] about the end of a relationship — the moment where you've been apart but then you spend another night together and you're not sure what it means, whether the end is 'coming true' or the relationship is 'coming back.' It's perhaps ultimately about when a relationship ends and it feels outside of anyone's control."

"The music for this song dates back to 2006 and lived on a work-in-progress playlist of this record that I kept coming back to. I was trying to write a string part that mimicked Appalachian choral music.

"I got a bunch of complex feelings from the music I wrote. I struggled with different words and melodies to sing on it. Last year the vocal parts came to me pretty quickly and the song was finished in about a day. The song wasn't written at Shangri-La studios in Malibu, but I'm sure I was thinking about that place when I wrote the last lyrics. Shangri-La is one of the few studios in which you can sit in the control room and open a window behind you. You can feel the light and the air coming off the ocean. You can have a musical world in front of you and the natural world behind you."

"'Wood' also implements melodies from ancient Persian music, specifically the Rast Panjgah, which is one of the modes in Persian music that doesn't sound sad to western ears. In the West we are constantly hit with music of Middle Eastern descent signifying terror, intrigue or sorrow. I wanted to make a song which did not follow that norm.

"The lyrics for the song are organized in a kind of A-B-A shape. The A section is in waking life and the B section is a dream. I wanted the song to start in reality, go into a dream, and then come back to real life."

Never Going to Catch Me

"This song is about what people are capable of getting away with, and the debate — sometimes internal and sometimes external — about what you believe is possible and what you just can't imagine a person would do.

"There are a few shifts in perspective in the song. I think everyone has a point where they say, 'No I don't believe a person or an organized group of people would do that,' and history usually proves that they're wrong."

Don't Let It Get to You

"Built over a sampled loop of Brazilian batucada drums from Paul Simon's 'Obvious Child,' this song was also originally released in 2011. I remember staying in my brother's apartment in Los Angeles in the spring of 2010 — I had a week to finish writing this song for a performance with the Calder Quar"tet.

I Will See You Again

"I like that someone could hear this as a simple folk song the first few listens but then realize there's more going on under the surface. What I'm talking about, again, is denial. It's that there is a message some still choose not to read, in concrete now submerged in the pavement."

"It started as an idea [producer and songwriter] Andrew Wyatt and I were passing back and forth at his house one afternoon. Then I worked on it with [singer] Angel at my studio, developing it further.

"I wrote the spoken word section on an airplane. I was imagining a conversation between people gathered at a protest. There are a few perspectives here, but they are all things I've felt."

"I had a feeling this song needed to be on the album, but for whatever reason I didn't listen to that instinct until the 11th hour. When I decided to finish it for the record, the rest of the album had already been mastered — that's how late in the game it reappeared. But it wasn't a hard song to finish. Almost all the instruments had been recorded and in the Notes app on my phone I had the lyrics ready. I'd been revising them on and off over the years.

"The word and name 'Rudy,' also spelled Rudi or Rudie, is one that exists in Iran [but] also comes from Jamaica. From there it travelled to London. This song has a narrative to it — I would say it's a story song — but it's one that straddles a few times and places. On a basic level, it's about escaping the place you are from because you can't be who you are if you stay there."

"This was a song that grew in length and number of parts and, at the same time, became more and more minimalist in production. The lyrics are about the end of a relationship. Some things about a person you can recall right now but you know will fade with time. 'Sometimes the colors run.' I'm relating colors and memories, two things which are connected in my mind."

"'EOS' was written in the midst of making this record. Finishing and putting [it] out felt like the first step to finishing the album. The lyrics came at the same time as the melody, which is rare for me. I was trying to take a specific experience — watching the sun set — and think about how that relates to experiencing change in your life on a bigger scale. 'Everyone of us has felt the lights go down.' I liked that this phrase was open, in a way. The lights go down on one stage of your life [and] sometimes that's sad, but sometimes change is good. That is something I feel like I keep being reminded of in my life."

"I've had experiences where my life will try to tell me something in a dream and sometimes it's something I'm not ready to hear. So I think maybe this song is about trying to listen to what your subconscious mind is trying to say to you.

"I'm realizing from responses I've gotten that you could hear the cello parts in 'Gwan' in different ways. One person described it as being Trad Music, meaning Traditional Irish music. That wasn't what I had in mind when I wrote those parts but I take that interpretation as a high compliment. Another [person] described it as sounding 'very Eastern.' I'm interested in the interconnections between these musics. I grew up listening to and studying both Western and Eastern music, but at this point in my life I'm not thinking too hard about what I'm trying to accomplish musically. I'm trying to just trust my instincts."

Don't Let It Get to You (Reprise)

"The original 'Don't Let It Get to You' started with a beat. The drums came first. All the musical and lyrical elements were written over those drums. But once it was written and recorded in that electronic way, I would sit down at a piano from time to time and play it as if it were a piano song. I did it enough times that I thought it would be worth trying to record a version like that. The original 'Don't Let it Get to You' was one of the first songs I finished writing for this album so it felt right that it should close out the record."