Accessibility links
Hear Jake Gyllenhaal Perform 'Move On,' From 'Sunday In The Park With George' : All Songs Considered The actor and singer appears with Annaleigh Ashford in a new Broadway cast recording of the Stephen Sondheim musical.

Hear Jake Gyllenhaal Perform 'Move On,' From 'Sunday In The Park With George' 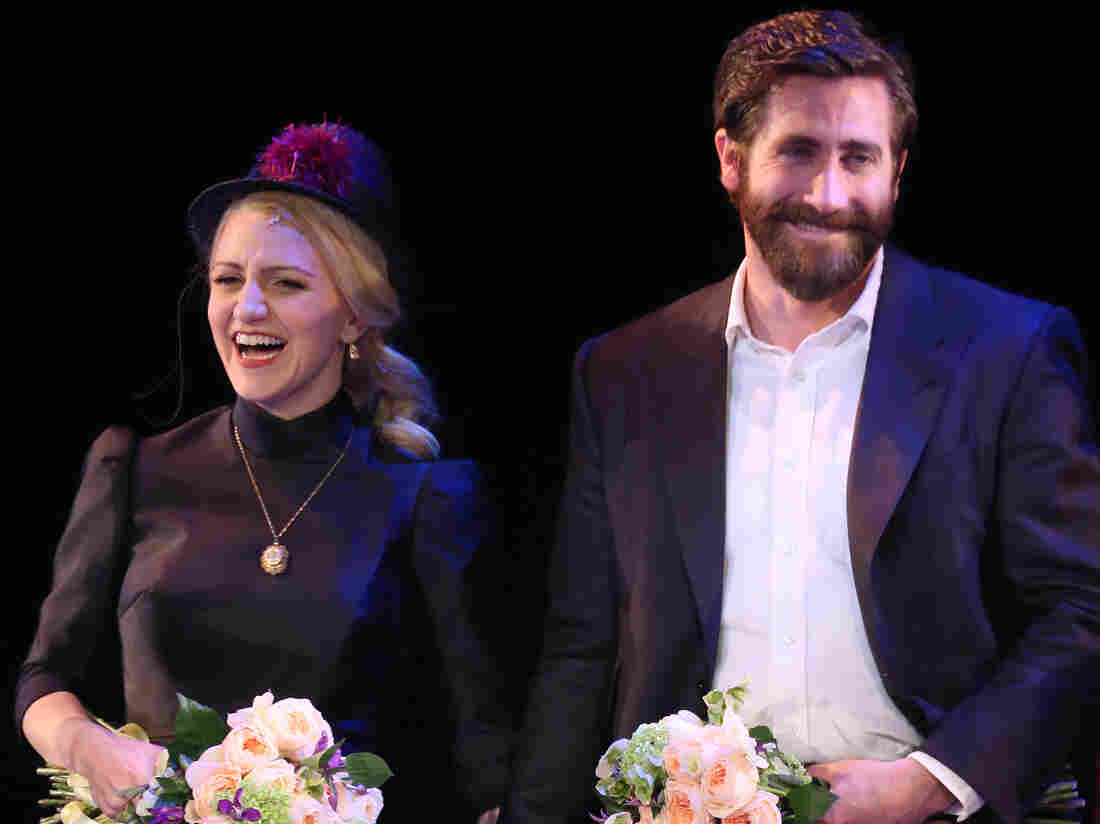 Annaleigh Ashford and Jake Gyllenhaal during the opening night performance curtain call for Sunday in the Park with George on Feb. 23, 2017. Walter McBride/WireImage hide caption

It's one thing to be a Hollywood actor who can respectably warble your way through a karaoke scene now and then. It's another to be able to perform the lead in a Broadway production of a Stephen Sondheim musical. Sondheim's melodies are complicated, the vocal ranges they require are considerable, and the surprises buried in them are startling. They require not only a lot of sound, but a belly full of feeling.

Jake Gyllenhaal joined Annaleigh Ashford (Wicked, Kinky Boots, and a Tony in 2015 for the revival of You Can't Take It With You) for a limited run of Sunday In The Park With George in the spring of 2017. It became a much-envied ticket and a well-reviewed production. It burned hot but briefly in a way perhaps suitable for a show about an artist: it ran only a couple of months and withdrew from consideration for Tony Awards in favor of shows with fuller runs.

On September 22, the cast album arrives for streaming and download. The CD is expected in November.

Sunday In The Park With George, with music and lyrics by Sondheim and a book by James Lapine, tells a fictionalized story of the lives of both painter George Seurat (specifically, Seurat's painting A Sunday Afternoon on the Island of La Grande Jatte). and his great-grandson, who is also an artist, and also named George. Both are played by Gyllenhaal. In the first act, Ashford plays the older George's mistress, Dot, who is pained by his singular devotion to work; in the second, she plays Marie, George's 98-year-old grandmother and George and Dot's daughter. Late in the show, in the song "Move On," George and Dot seem to meet across and between generations, where Dot speaks to him about the reckless but necessary perseverance of the artist, who cannot exist without it. "Move On" is one of Sondheim's soaring, searing explorations of the inevitability of imperfect resolution, not unlike "Being Alive" from Company and "No One Is Alone" from Into The Woods.