Accessibility links
20 Songs That Say 'Me Too' : All Songs Considered Women have posted the phrase on social media to raise awareness of sexual assault, abuse, and harassment. Here is a list of songs in which artists said "me too." 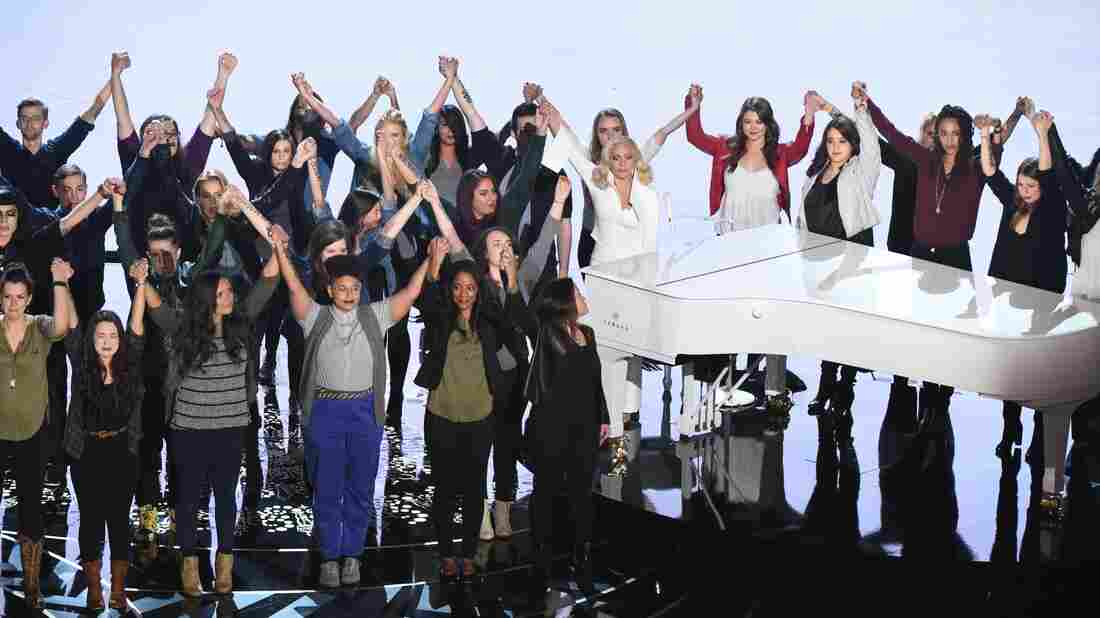 Lady Gaga performs "Til It Happens To You" on stage at the 88th Oscars on Feb. 28, 2016. Mark Ralston/AFP/Getty Images hide caption 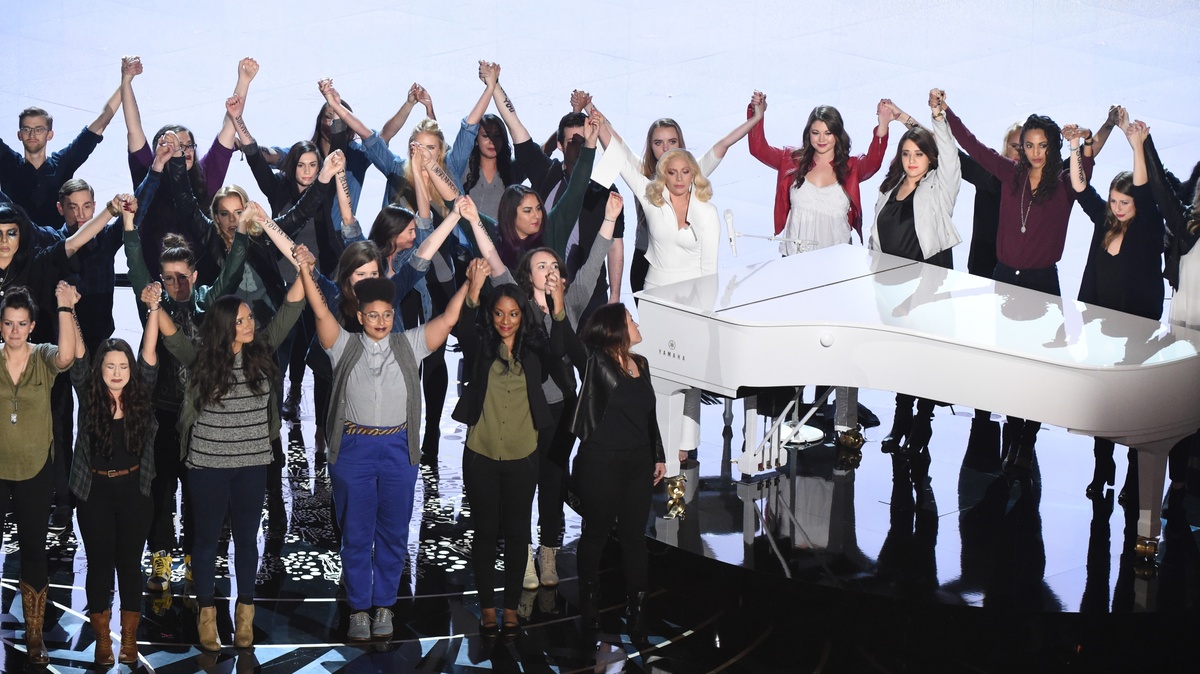 Content advisory: The videos and language below contain strong language and may be offensive to some.

For the past two days women have overwhelmed social media with a truth often hidden in plain sight: One out of every six women has been subject to an attempted or completed rape during her lifetime. Countless more endure other forms of assault, abuse or harassment.

Prompted by the recent revelations that Hollywood mogul Harvey Weinstein performed such acts on dozens of women over the past four decades, the phrase "me too," posted as a hashtag or Facebook status, did the usual digital-activism work of intensely personalizing a social and political issue that many could otherwise dismiss as "not my problem." As some men posted, and some women of color argued, it takes a certain amount of privilege to feel safe enough to make even a two-word disclosure like this one. Questions about race and gender arose that necessarily complicate rapid-fire political discourses. Yet "me too" has approached a certain critical mass; the hashtag had been used 200,000 times as of Monday morning.

As a meme, "me too" does a great job of crystallizing the rage and vulnerability women feel in the face of rape culture. This conversation, however, is hardly new. Artists, activists, writers and musicians have told the stories of violated women across time — particularly since the 1990s, when popular music and feminism powerfully intersected in the pop mainstream and the musical underground. Here's a list of twenty songs in which women said "me too" — without shame.

This stark, semi-autobiographical monologue, which Amos wrote to be performed a capella, takes the listener within the mind of a woman being raped – and is based on details of the singer-songwriter's own assault after a show when she was 21. The emotional centerpiece of her solo debut album Little Earthquakes, it remains one of pop's most intimate and forthright accounts of how women experience sexual violence.

"'His Story' was happening before we were born," TLC member Rozonda "Chilli" Thomas said in a recent interview, addressing this song's theme of society's tendency to accept the male viewpoint on sexual assault, even in the most dubious circumstances. A protest song in the guise of a funk jam, TLC's invective has been somewhat forgotten, perhaps because it was inspired by and mentioned the highly controversial Tawana Brawley case of 1987; its big-picture take still resonates.

Sexual assault is always political, and sometimes it's actually a tool of the state. The post-punk band Au Pairs – part of a vibrant feminist scene that arose in Northern England at the turn of the '80s – made that reality explicit in this song, about female Irish Republican prisoners who were repeatedly strip-searched and reportedly violated as part of the daily routine in the Northern Irish prison of the song's title. The women of Armagh conducted a "dirty protest" to call attention to their plight; this song captures its disgust.

Phair's album-length rejoinder to carelessly sexist indie rockers, Exile in Guyville, is one of the finest accounts of all the crap that women put up with within music scenes. This deceptively wry ballad about one-night-stand Johnnies contains a shocking line — "even when I was twelve," Phair sang, recalling all the times men enjoyed her body and then left her behind — that connects everyday, callous treatment to the larger culture of abuse that women must navigate, starting when they are girls.

The early '90s Riot Grrrl movement brought the realities of rape culture into stark focus within an indie rock community that often presented itself as above "all that." Kathleen Hanna, Bikini Kill's vocalist and visionary, was the Cassandra who demanded that the men around her acknowledge that they, too, were part of the mass deceit that allows male perpetrators to "deny, deny, deny, deny."

The effects of sexual assault often, perhaps nearly always, last a lifetime. At 17, in this blunt, introspective, beautiful piano ballad, Fiona Apple revealed the aftermath of her rape at age 12. "My oblivion," she called it, resurrecting herself through sheer grit and musicality, and guiding others to do the same.

Rape culture is supported by a criminal justice system that can seem inclined towards preserving male power. (The recent case of Brock Turner, the Stanford student whose sentence was reduced by a judge concerned about its impact on his future, is illustrative.) Post-punk greats The Raincoats refer in this song to a much-publicized rape trial in which a British Army officer received lenient treatment from a judge concerned about his military standing, and contextualizes that outrage within a larger view of women's objectification.

The Barbadian queen of international pop has often alluded to sexualized violence in her songs, partly because of her own history, which includes surviving domestic assault by her then-boyfriend, the singer Chris Brown. This song takes on rape directly, and can be heard as a revenge fantasy aimed at the fiercely patriarchal culture of the Caribbean dancehall music it mines.

Certain environments where male bonding is prioritized — fraternities, for example, or perhaps summer rock festivals — have proven particularly conducive to men who violate women. This past summer, the Baltimore band War On Women brought this demand to disrupt such enclaves to Warped Tour, and, perhaps predictably, endured a backlash.

Stalking – the relentless invasion of a woman's space and privacy – is a major aspect of the culture of misogyny. In one of her most resonant and popular songs, Lilith Fair co-founder Sarah McLachlan claimed power over a fan who'd stalked her by imagining herself in his position, a chancy move that allowed her some sense of power. Though, she said, the experience had forced her to live with the constant fear that she might be raped.

The #metoo hashtag rivets us because it feels urgent and new. But sexual assault is embedded in American culture, especially within the poison legacy of slavery. Newly minted MacArthur Foundation Genius Rhiannon Giddens brings listeners right into the bloodied heart of one enslaved woman impregnated by her rapist, whose resilience defied history itself.

"What kind of love," Eve asked in this song dedicated to a friend who'd been killed by her boyfriend, "make you wish he would die?" The cycle of domestic violence included rape, and the rap royal included it as part of this cry for justice, which ends in a scenario of revenge. "Love is Blind" is a swaggering achievement that stands against hip-hop's longstanding practice of making light of sexual assault and harassment.

The atmospheres in which violence can be mounted against women are often aggressively male. Extreme heavy metal is, notoriously, a dude's paradise; Otep Shamaya is one of the few women who has found stardom within it. From the start of her career, as in this song confronting the shame a rape victim feels, she has demanded that her peers acknowledge the ways in which they quash the feminine.

All too often, women have been taught to blame themselves for their own victimization. Sometimes religion has enforced this self-condemnation. Amy Grant, one of contemporary Christian music's superstars, turns this shame around by telling the story of a sexually abused child in poignant detail before celebrating the girl's redemption as a grown woman. Grant puts mercy before patriarchal judgment in her version of being born again.

The murder ballad is a Euro-American traditional song form that forms one of the foundations of folk music. Through its many tales of lone male wolves strangling women or pushing them into rivers, it also normalizes misogyny. In this satisfying twist on the usual story, by Americana's master storyteller Gillian Welch and her partner David Rawlings, the titular character is a rapist who becomes a casualty of his own criminal act when his victim – a determined survivor – grabs a broken bottle and ends both the crime and his life.

One way that men have erased women's accounts of their own realities is by treating misogyny as a joke. The Detroit rapper Angel Haze battles one of the masters of that despicable art, Eminem, in this truth-baring session. The Eminem song that shares this title is uncharacteristically (and barely) tender, qualified by a final rhyme about almost shooting his ex-wife Kim. Haze's is much deeper, detailing childhood trauma enacted by multiple abusers and ending with her listing its devastating effects on her psyche. The truth is not a punchline.

The crucial task of helping women recover from violence often falls to other women. In this gently redemptive song about recovery from Big Thief — a response to Big Thief's "Watering," which details an assault, possibly of the same woman — the band's singer-guitarist and main songwriter Adrianne Lenker becomes that nurturing companion, helping a survivor understand that both her inner and outer world have forever changed with what she's endured, but that she can still see light.

Peer pressure and alcohol are two potent forces that both feed rape culture and, sometimes, protect its perpetrators. Canadian country artist Kira Isabella and her songwriting team (including Saving Jane's Marti Dodson) capture that reality in the tale of a "no name girl from the freshman class" violated by the big man on campus and, in a tragic contemporary twist, by whatever witness chose to post images of the act on the Internet. Penn State and Steubenville are the backdrop for this all-too-familiar tale.

If today's rejuvenated mainstream consciousness about sexual assault has an anthem it is this ballad, co-written by pop's Mother Monster alongside Diane Warren, the mother of many other massive hits. Featured in The Hunting Ground, a 2015 documentary about rape on college campuses, it's a giant power ballad whose ultimate message is that only those who've survived sexual violence can understand it. Tragically, the past few days have indicated that most women are in that position; songs like this one resonate all too widely.