Accessibility links
Composer Daniel Hart Talks About His Score For The Film 'A Ghost Story' : All Songs Considered Hart talks about the inspiration and challenges behind his stunning score for the deeply existential film A Ghost Story.

Daniel Hart Talks About His Stunning Score For 'A Ghost Story' 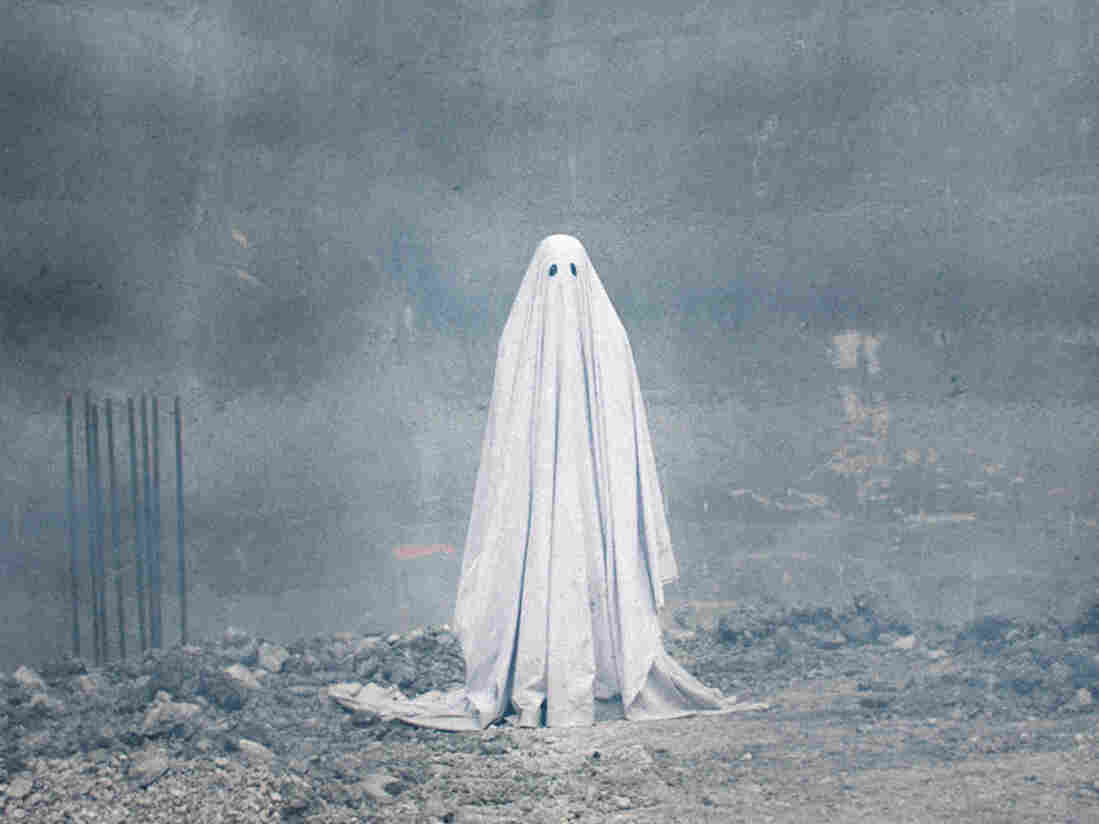 A ghost stands in the ruins of a demolished building in a scene from the film A Ghost Story. Bret Curry/A24 hide caption

The best film scores walk a delicate line: They help propel the story, guide an audience's emotions and are also often a distinct character, with a role and voice as important as any actor's — but they also have to do all that without getting in the way, or drawing too much attention.

For the deeply existential film A Ghost Story, from director David Lowery, composer Daniel Hart faced an additional hurdle: Much of the 90-minute movie unfolds without any dialogue and very little action, leaving large gaps of silence for him to fill and sustain the story.

A Ghost Story, roughly, is about a couple living in a house in the remote countryside that may be haunted, and the myriad stories that unfold there as other people come and go. But more than that, it's about the vast enormity of time with questions about reincarnation, time travel, life after death and parallel universes. The film also features a scene-stealing cameo by Bonnie "Prince" Billy and another brief appearance by Kesha.

The music Hart came up with is a breathtaking score as mysterious as the film's myriad meditations on life's most cosmic questions.

For this +1 edition of All Songs Considered, Daniel Hart talks about how he gave A Ghost Story it's most important voice and reveals some of the tricks he used to pull it off. You can hear the full interview, with music from the score, with the play button at the top of the page or read edited highlights below.

Hear The Full Song 'I Get Overwhelmed'

Daniel Hart on writing "I Get Overwhelmed," the pop song that inspired the entire score for A Ghost Story

"I wrote it at the beginning of 2015. I was spending so much time online, just into the night, like hours and hours, sometimes actually working but then sometimes just reading and poking around. And I just got to a place where I felt like the point of diminishing returns had definitely set in. And I was just totally preoccupied with everything that I was thinking about. I just had all these questions that started coming up into my head like, 'What what am I doing? Why am I making the choices that I'm making? Why are all these terrible things happening around the world? And I'm spending so much time reading about them — and what good does that do?' And I couldn't really make sense of any of that. So I wrote ['I Get Overwhelmed'] about it."

On the trick he used to create the film's ethereal, ambient soundscapes

"I took ['I Get Overwhelmed'] apart and I took the different parts of it and I ran it through this program called PaulStretch. And it's specifically designed to take music and make it incredibly slower so that it sounds like atmospheric soundscapes, because it's meant to slow something down. Like if something was three minutes long you can make it three hours long, you can make it three days long. Everything becomes a sort of long, languid musical phrase. And I took the separate elements of the song, like the strings or the guitar or my own vocals, and I ran them through PaulStretch to make these long soundscapes out of the different elements of the song, then used that as one of the recurring themes throughout the score."

"One of the other things that I figured out early on in the process was that this was going to be a score that needed vocals, that needed some kind of lyrics. I don't know if it was because in my mind I was trying to fill up the space that would have been filled by dialogue, but it was one of the things that became clear to me when I started. So I started looking for texts that were related to ghosts and then drawing lyrics from those texts, then writing music to go along with them. [I] hired a couple of choral singers in Dallas to do most of that work. I don't know why [I chose] Latin. But I liked the way it sounds — and there's [also] a little bit of the Tibetan Book Of The Dead. And you know they're just part of the larger piece, so they're not upfront and center like they might be if it were a song."