Accessibility links
Shame On The Pubs, Punks And Nonsense Behind Debut Album 'Songs Of Praise' : All Songs Considered The London band's debut is punk synthesis at its prettiest and ugliest. Guitarist Eddie Forbes and vocalist Charlie Steen take us through the story of each track, spittle-flecked rage and all.

Shame On The Pubs, Punks And Nonsense Behind Debut Album 'Songs Of Praise'

Shame On The Pubs, Punks And Nonsense Behind Debut Album 'Songs Of Praise' 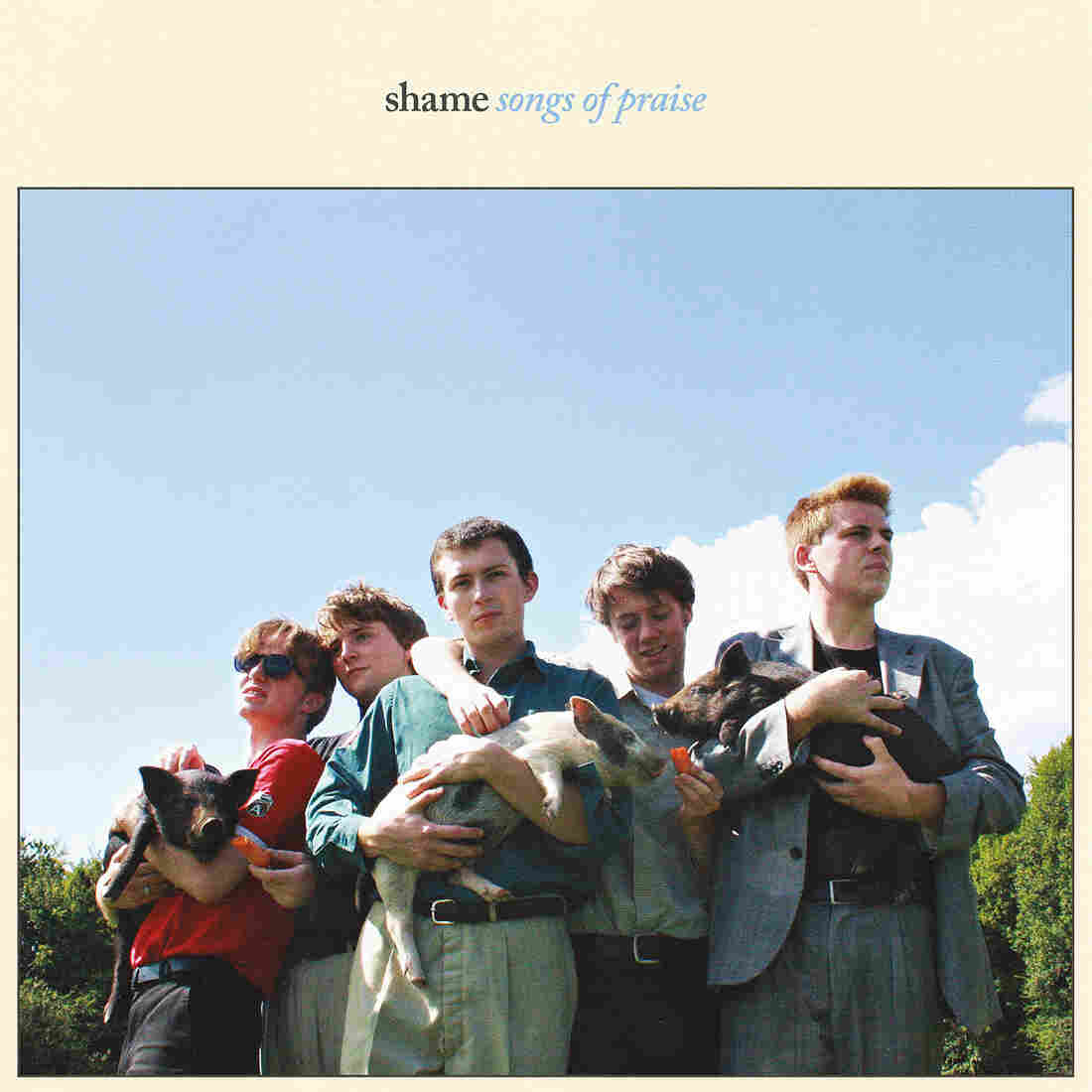 Reality is weird — a series of events that connect from birth to death. Shame's singer, Charlie Steen, doesn't claim wisdom of the process, he's just pulling hot embers from this unruly fire, singing in a hoarse scrawl: "My nails ain't manicured / My voice ain't the best you've heard / And you can choose to hate my words / But do I give a f***."

Shame, a five-piece post-punk band, came up in south London's squat scene through a few square-eyed singles and a love for bands that rewired punk like The Fall, Wire and Television Personalities. Songs Of Praise, the band's debut album, is punk synthesis at its prettiest and its ugliest; bowing to forebears with gobs of spit, but confident enough to expose a nerve with certain grace and wide-eyed wonder. It's a record that lurches like a vampire bat ("Dust On Trial" and the Stooges stomp of "Gold Hole") and kicks grinning teeth ("Concrete," "Tasteless," "Lampoon"), but also contains a tenderness that has its roots in hopelessness, like the jangly "One Rizla" or the touching closer "Angie" (which bears a passing resemblance to the gliding ballads of Oasis, put to a motorik beat). Charlie Steen is up to the dynamic challenges posed by the band, roaring and crooning in kind.

Guitarist Eddie Forbes and vocalist Steen got together to write about the stories behind each track on Songs Of Praise, from the band's beginnings in a practice space above a pub, parting with adolescence and the "dark, twisted love story" that ends the album.

This was one of the last tracks we wrote before recording the album, when we'd temporarily moved to a different rehearsal room (Fortress Studios in East London). Eddie came up with a riff that immediately gave off a much darker sonic vibe to anything we'd explored before, so we were all keen to take it further. Instrumentally, it was and still is a bit of a wildcard for us, which we welcomed as it gave us a chance to explore some more complex and sinister avenues that we hadn't previously given much thought to. As the song started to take shape, Steen's lyrics and vocal angle began to complement the darkness of the track.

This song was kind of a blank slate for us when it came to recording/production. After we'd recorded it at Rockfield in Wales, we approached Happa (legendary Leeds-based techno wunderkind) to layer on some more experimental electronic sounds, which took the track to where we wanted it to be. It's weird to think to start with we didn't even think this would end up going on the record, but we're glad we got it in there. In the end it stood out as a clear opener to us.

Our first time playing this song was at the Great Escape in Brighton, which was kind of the catalyst for when things started happening for the band. Whilst jamming acoustically in a pub green room, Josh came up with what went on to be the chorus. The song was left on the shelf for a pretty long time before we worked on but after we added the bouncy to and fro between Eddie and Sean [Coyle Smith], the song started to take shape.

The call-and-response vocals between Steen and [bassist] Josh [Finerty] represent the idea of being trapped in a relationship, almost feeling like you're talking to yourself in a way.

This song went through a couple of instrumental incarnations before we settled on this one. When we recorded it, we also had all five of us doing vocals for the ending, which gave it the sort of schoolboy-choir, vaguely angelic finale that we were looking for. Incidentally, this track was also the first release on our new label, Dead Oceans.

This is by far the oldest song we have on this record, written above The Queen's Head pub in Stockwell in summer, 2014. It started off based around a pretty stupid jangly riff Eddie had written at home some months before, with a godawful funk intro, which we for some reason thought was good at the time.

Steen's lyrics to this song were literally written in a school textbook, as you might be able to tell by listening to them. Lyrically, this song is kind of an outcry of the kind of hopelessness and frustration we experienced during our, in part, tragic adolescent years.

After being wisely advised by our manager to cut the funk intro about a year later, the song started to become more coherent. We made several attempts at recording this track with various different people, however none of these seemed to bear fruit as we had hoped, which was kind of frustrating. We continued playing the song at every show — including twice at one show when we were demanded our first encore — and during our last stab at demoing the track before recording the album, things suddenly began to fall into place and we moulded it into its current form. 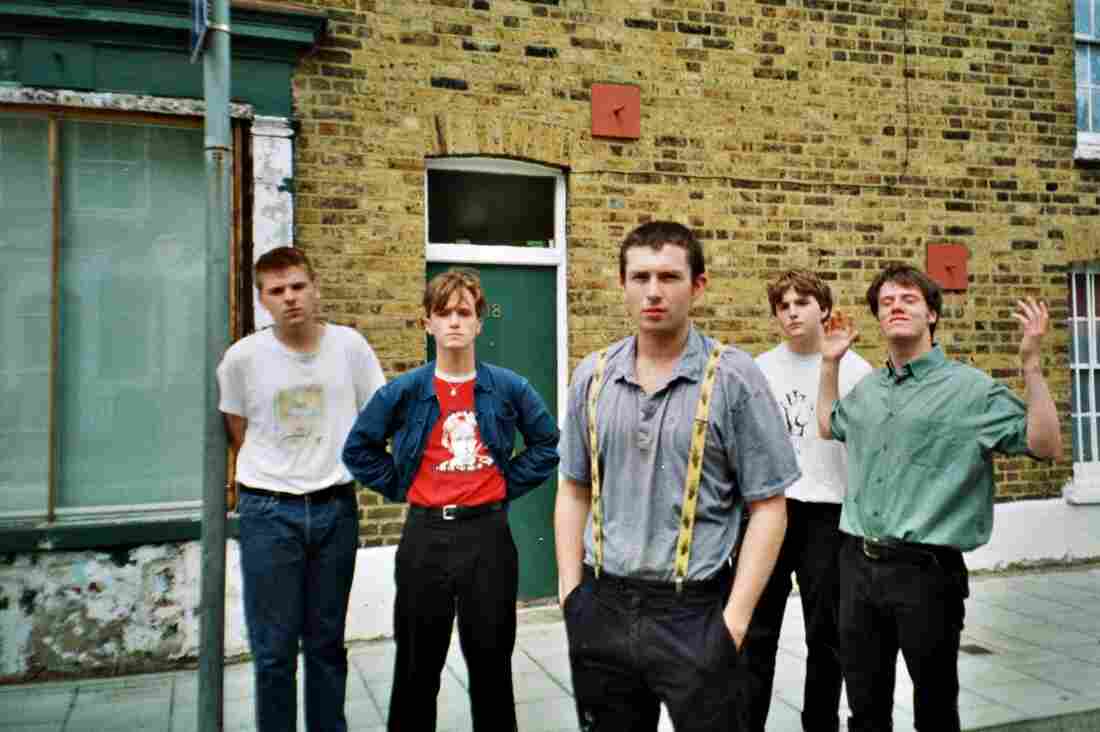 "The Lick" was named for the "unnamed member of the band entered a strange state of drug-induced psychosis and for a good ten minutes could only seem to muster the words 'the... lick.'" Holly Whitaker/Courtesy of the artist hide caption 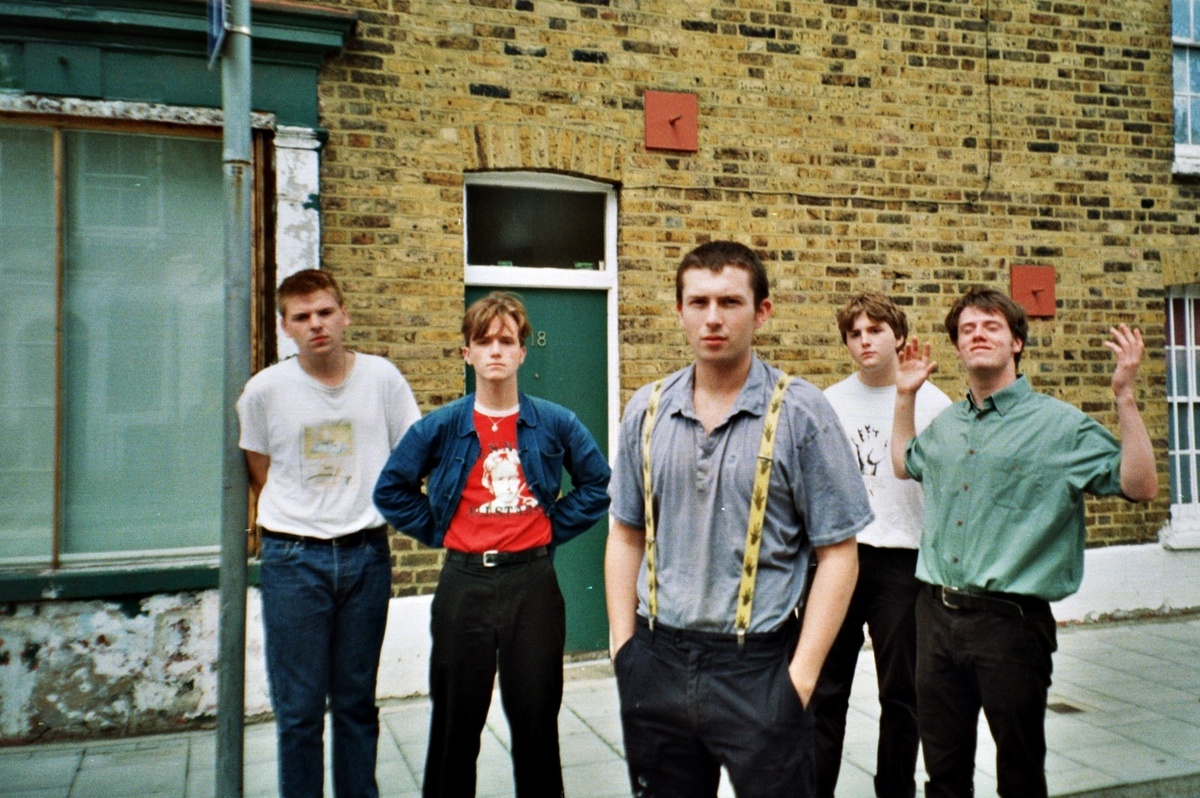 "The Lick" was named for the "unnamed member of the band entered a strange state of drug-induced psychosis and for a good ten minutes could only seem to muster the words 'the... lick.'"

Holly Whitaker/Courtesy of the artist

Next up is "The Lick," which was our first ever offering to the world, in May 2016, alongside a video directed by our good friend Mica Levi at our current rehearsal space, Dropout Studios. The name of the track came from when, following a long night at the very same studio, an unnamed member of the band entered a strange state of drug-induced psychosis and for a good ten minutes could only seem to muster the words "the... lick."

This track is one of four from the album that was written at our birthplace, The Queen's Head, and originally weighed in at just under eight minutes long, with Steen's stream of consciousness flitting from talk of gynecology to attacking society's demand for something that is "relatable not debatable." Speaking out and/or being heard is a common recurring theme throughout Songs Of Praise: "I hope that you're hearing me" on "Concrete," "I'm not much to hear" on "One Rizla" and this continues with "I don't want to be heard if you're the only one listening" here on "The Lick."

"Tasteless," alongside "Lampoon," are two tracks on the album that embrace the Pixies-esque loud-to-quiet dynamic. "Tasteless" was formed pretty quickly compared to some other tracks on the album, because we focused far more on the rhythm section before adding anything else.

The lyrics for this song were pieced together from inside one of Steen's many lost notebooks, patching together different sentences from various pages. The underlying message conveyed, however, tackles indifference in our society. It also features the line "I like you better when you're not around" a healthy sixteen times in a row.

This song is the outcome of when Josh and Steen were the only two members of Shame to turn up to practice, Josh playing the drums and Steen making his musical debut with the bass line. Originally having planned to heavily feature dolphin sounds on record, we eventually settled for letting Josh run around the studio wailing and shrieking into the mic to create the heavenly backing vocals on this track. We rarely play it live, but we occasionally bring it out for our encore song, especially when we're expected to play for like a f****** hour without even having an album out — love you Europe. It blows a short and chaotic bubble.

This song is supposed to be nonsensical. The lyrics are also nonsense. They have no deeper meaning and are purely for our own amusement.

Another track written in our practice space above The Queen's Head, actually in the same session as "Angie." "Gold Hole" ended up being the first song we recorded with Dan Foat and Nathan Boddy in July 2016, who we then went on to record this album with.

It took us a few attempts at recording this before the rhythm section achieved the impact we wanted (bless up Dan and Nath). We were happy with how this came together as one of the songs we'd been playing live the longest. This is the second version we've put out of this track, and it's grown each time for us. 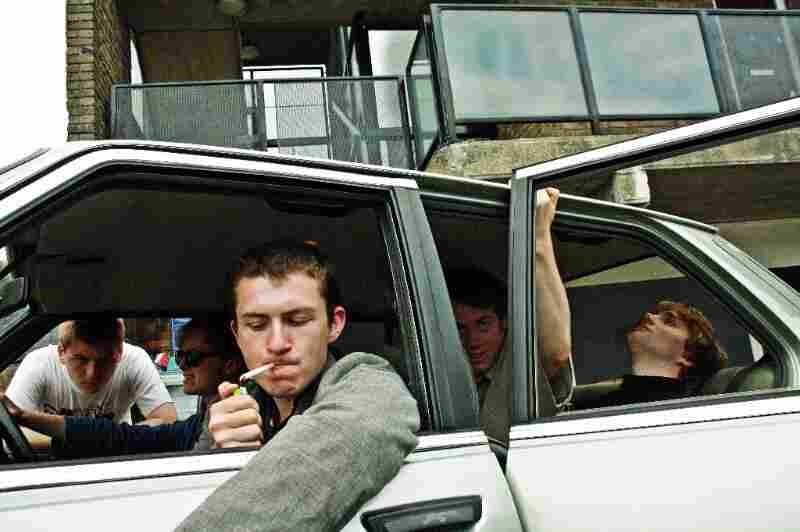 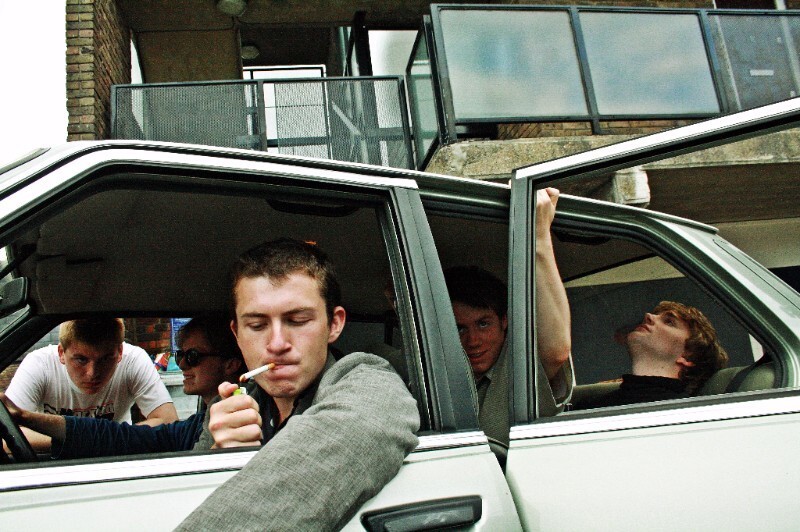 Commenting on the post-punk strut of "Friction," the band says, "Could've used more cowbell." We never disagree with more cowbell.

Holly Whitaker/Courtesy of the artist

"Friction" was the last song we wrote prior to recording Songs Of Praise, and was sparked from one of the riffs that Sean brought forward. We wanted a track on the album that you could dance to, as our previous No. 1 dance hit "Furry Freaks" unfortunately didn't make the cut onto the record, so we smacked a s***load of baggy percussion on "Friction" and here we are. Still could've used more cowbell.

The song is about the awareness everyone in our London-based environment seems to have towards social and political issues, the idea that we are progressing as a society. Yet, when stepping outside of the bubble of London and looking past the friends we surround ourselves with, Brexit, Donald Trump and many other issues seem to suggest we are moving backwards. Creating a friction.

Musically, this song is short and snappy with a pace that requires great stamina, as the guitars seem to be constantly on the verge of chaos with the bass and drums lying underneath adding the power needed to create such sonic abuse.

Throughout Songs Of Praise, Steen asks a lot of questions in his lyrics and "Lampoon" is no different, with many questions being asked including, "What is it we fear most?" and "Do they hear you when you laugh or only when you cry?" Lyrically, this is about learning to embrace solitude, something Steen still struggles with, and feels the need to always be surrounded by a form of escape from himself.

The bones of this song were written at The Queen's Head, after just hearing the distressing story that is revealed in the lyrical content. It was a song we never thought would make it onto the album until Dan and Nathan, the producers, heard it and insisted that it be included. This song is perhaps the most sentimental to us, as a large chunk of it was written at Rockfields during the recording of the album and, due to its extremely climactic tone, could only be the closer for the album.

It is a dark, twisted love story. Whether it is true or not we shall never know, but the story tells of a teenager who falls in love with a girl who is later to commit suicide. It delves deep into the love this man still holds for her, even after death.