Accessibility links
From Post-Bop To House: Mapping The Legacy And Influence Of Hugh Masekela : All Songs Considered The death of Hugh Masekela marked the passage of a legendary life spent re-orienting the world towards his vision — here, a look at his singular and expansive influence through the decades. 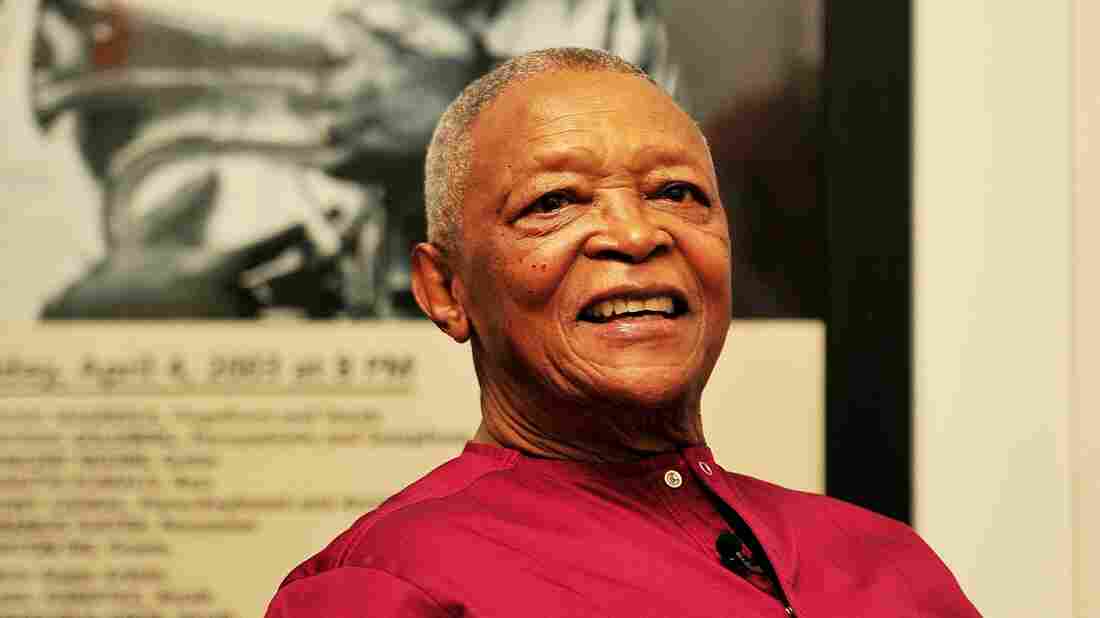 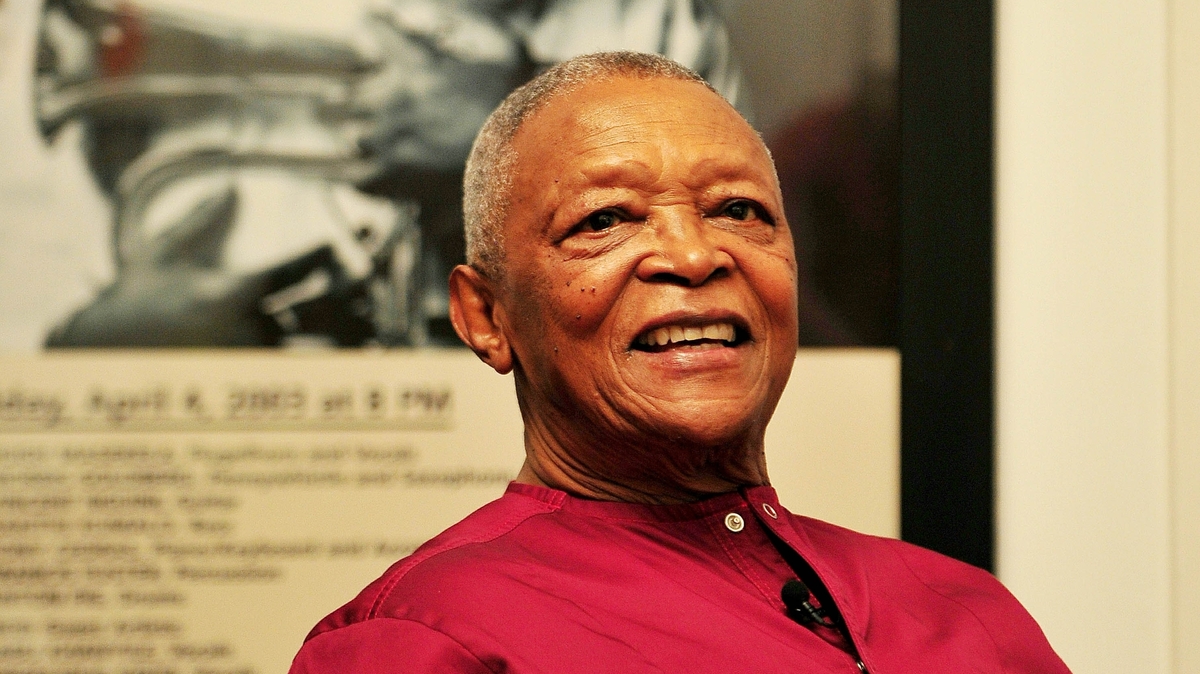 Legendary trumpeter and anti-apartheid activist Hugh Masekela, who died this week, photographed during an interview on October 27, 2016 in Johannesburg, South Africa.

Few careers in contemporary music had the arc and the diversity that South Africa-born trumpeter/singer/composer Hugh Masekela did, before he succumbed to prostate cancer on Tuesday at the age of 79. His life was filled with deep musical investigations and global cultural celebrations — both of which he pursued throughout an endlessly successful and inventive 50-plus-year career.

A now-Internet-famous photo of 16 year-old Masekela, exhilarated at receiving a trumpet (supposedly sent to him by Louis Armstrong), betrays the youngster's excitement about jazz, which was his first love and enduring bedrock. An escape from Apartheid South Africa to New York for music schooling provided a broader education, and a relationship with singer Miriam Makeba opened the door to professional pop gigs, which he also took full advantage of. The spirit of the times continued to move his sound forward. Afro jazz, Summer of Love, Black Power, Pan-Africanism, the rise of disco and club culture, digital recording — all were internalized and used to his devices. Nothing, though, was as influential to Masekela's music as the plight of his homeland, which he engaged with as an artist, promoted as an ambassador, protested as an activist and documented as a kind of folk sage.

The 15 tracks below are an overview to this arc, touching upon all of these threads. Hopefully, they're only a first step towards the exploration of a mighty life that saw and heard many changes – some of which Hugh Masekela instigated, and many of which he played. Fearlessly.

Jazz Epistle – Verse 1 is a foundational document of South African jazz's rich tradition. Because the post-bop played by the Epistles — featuring two future giants, the-20 year-old Masekela on trumpet and Dollar Brand (soon to be Abdullah Ibrahim) on piano, as well as alto Kippie Moeketsi, trombonist Jonas Gwangwa, bassist Johnny Gertze, and drummer Makaya Ntshako — locked into its swing like the finest Americans of the time. (The group was modeled on Art Blakey's Jazz Messengers.) Side one, song one was Hugh's lone writing contribution. The band did not last.

Years before she recorded it on her second American studio album, The Many Voices of..., Makeba was performing this South African wedding song about the beauty of a girl named Thanayi, with her group the Skylarks. For this spooky, echo-heavy version recorded in the folk-rock style of the era, Masekela added a few spare lines and played a solo counterpoint to his soon-to-be-wife's vocal and the acoustic guitar. But when revisiting the song on the occasion of his 60th birthday, it had a party-style gallop and a great vocal courtesy of the incomparable Thandiswa Mazwai.

Upon graduating from the Manhattan School of Music, Masekela set about establishing his jazz bona fides in the States. Despite its horrid title, The Americanization of Ooga Booga, a live quartet gig at a not-so-full-sounding Village Gate that was recorded/produced by Tom Wilson (of Bob Dylan and Velvet Underground fame), kicked off a partnership with pianist Larry Willis and showcased a pan-global take on soul jazz, including this Herbie Hancock classic, which Hugh tears apart.

Classic rock mythology claims that Byrds bassist Chris Hillman composed parts of this ironic paean to the contemporary musical godhead at a Masekela session, then invited Hugh to craft a trumpet line for it, marking the first time brass had appeared on the Byrds' recordings. The result is one of the all-time great rock singles, with tongue planted firmly in cheek, a mindfully mischievous sneer and Hugh's horn flying above it all. In June of that year, the band brought him on-stage to close their set at the Monterey Pop Festival, setting the stage for...

A slightly funky, cocktail jazz instrumental going No. 1 on the pop charts only seems unlikely if you don't consider that besides being the Age of Aquarius, 1968 was also the age of Tijuana Brass. (In fact, Herb Alpert's troop had directly preceded Masekela at the top of the chart with a version Bacharach & David's "This Guy's In Love With You.") A breezy trumpet-alto duet melody, mirrored by a giddy piano, and driven by drummer Chuck Carter's "even more" cowbell, it remains a unique smash — especially in the context of its performer's career.

The spirit of the times called for more than mere grazing, and following his chart success, Masekela's music embraced an explicit pursuit of his South African roots and pan-African ideas. "Shebeen" is a wistful slice of guitar-and-brass township soul, written by Epistles trombonist Jonas Gwangwa, who joined Masekela and alto saxophonist Caiphus Semenya in the short-lived Union. Their self-titled album kicked off a distribution deal that Hugh's Chisa Records had signed with one of the most popular black-owned businesses on the planet, Motown.

The story of exploited migrants toiling in Johannesburg's gold mines, the closing track off Masekela's classic album, I Am Not Afraid, has not only become one of the artist's most-beloved political standards, but a union anthem as well. It is a roiling epic of a song, guided by the (originally uncredited) piano of The Crusaders' Joe Sample and a choir of voices, a few of which belong to members of Hedzoleh Soundz, the percussion-heavy Ghanaian group who served as Masekela's band in '73-'74, introduced to him by Fela Kuti.

Another Masekela track under the spell of Fela Kuti, but one that did not see the light of day until a 2006 compilation that opened the Chisa records vault. This funky blues takes as its model the Afrobeat music Fela was then bringing to life in Lagos, and its conceit of a traveling unified sound (the lyrics name-check numerous western and southern African countries) from the Nigerian bandleader's notions on Pan-Africanism. The swirling guitars and Masekela-led brass drive a steady groove.

One of Masekela's best-known and most charged anti-Apartheid anthems was written as a response to, and as direct documentation of, the 1976 Soweto Uprising, which was set off by the government instilling Afrikaans as the official school language of the black townships. Originally recorded for Masekela's 1977 album, You Told Your Mama Not to Worry (which the streaming music algorithm seems to have lost), it was an instant concert staple for Makeba (which she re-recorded for 1989's Welela).

A revitalization and a sonic update, this synth-heavy track became an international club smash when it was adopted by progressive DJs — most notably, Larry Levan at the Paradise Garage, New York's trend-establishing, post-disco church of the late '70s and early '80s. If Masekela's rapping on the track was a misstep (it was), its ingredients — Hugh's trumpet playing against the Fairlight and a bass-synth, creating a kind of proto-house or electro makossa — were not dissimilar to what contemporaries like Miles Davis and Manu Dibango were doing. It certainly re-established Masekela's club bond, which continued until the end. (Note: the Hot African mix remains pure fire.)

As the anti-Apartheid movement swelled in the late '80s, partially focusing on the release of Nelson Mandela, who'd been jailed since 1962, Masekela wrote an anthem to demand Madiba's release, then set about playing it throughout Paul Simon's massive Graceland world tour. With its organ and vocal choir out front, and Masekela stringing together ebullient horn lines, this was South African gospel music of the best order, almost willing (imminent) freedom into being. Three years later, it was so; and the song's melody became one of Mandela's calling cards.

The synth-heavy, 1985 studio version of Masekela's only recorded Fela Kuti cover was too lightweight to be a great creative homage; at the time, it served as a reminder that a hugely important international musician (and Hugh's long-time anti-colonialist co-conspirator) was then languishing in a Nigerian jail. Yet from there onwards, "Lady" rarely left Masekela's concert set-lists, becoming a centerpiece of his live sets. The version on Hope, a well-received career-spanning live album (recorded at Washington, D.C.'s Blues Alley), is pretty hot.

Masekela's engagement with synthesizers in the '80s plugged directly into South Africa's healthy dance music scene, which, with the rise of kwaito in the early '90s, became fully integrated into the sound the townships and sowed the seeds for Mzansi's immense and diverse contemporary house scene. Carl Craig, one of Detroit techno's pre-eminent producers (and one deeply familiar with both jazz and South African music history) decided to pay Masekela forward, with a remix of Hugh's 1975 Afro-Disco classic, which got love in many clubs and still smokes.

Long ready to play the wise elder passing the torch, Masekela lent his voice and trumpet to one of South Africa's biggest house music artists for a typically humanist statement. His horn dances across Black Coffee's exceptionally minimal beat and open-chord keyboards, more languidly than it may have in previous years, but with numerous curt, melodic blasts to serve as a reminder. The mere pairing here speaks volumes across generations, genres and genealogies, just as Masekela had for almost his entire life.