Accessibility links
What Does An Inclusive Hardcore Punk Festival Look Like? : All Songs Considered Six years into Damaged City, the D.C. festival is starting to reflect its younger, more multicultural and gender-fluid crop of artists and attendees.

What Does An Inclusive Hardcore Punk Festival Look Like?

What Does An Inclusive Hardcore Punk Festival Look Like? 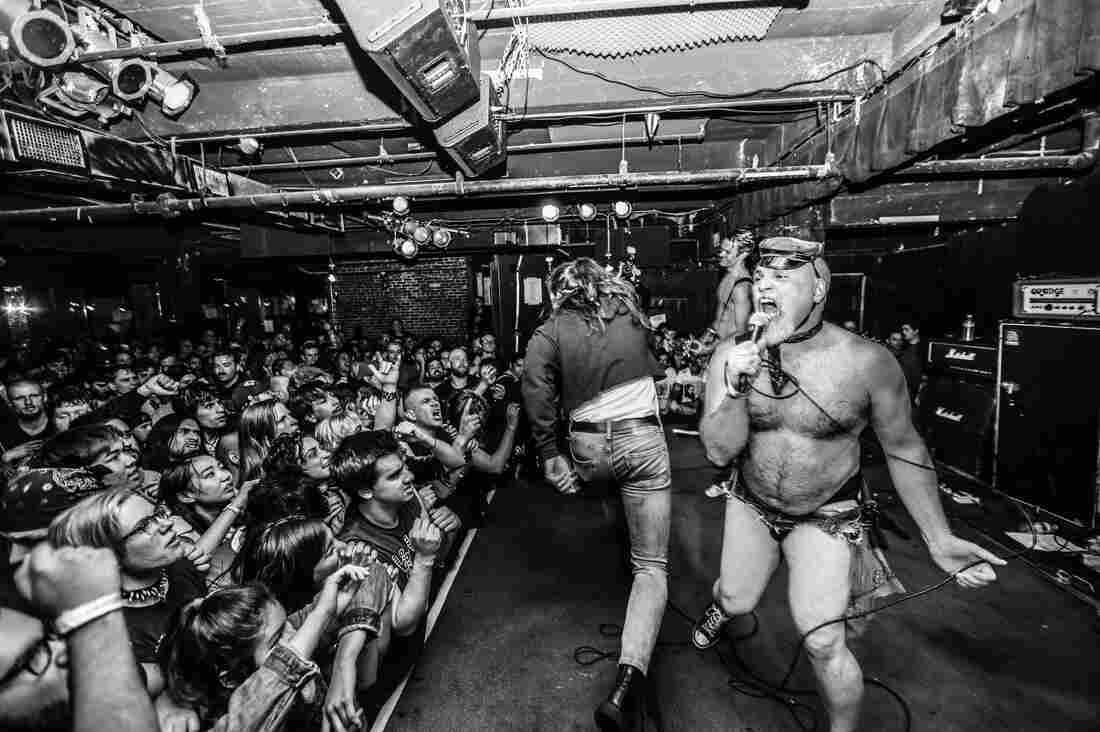 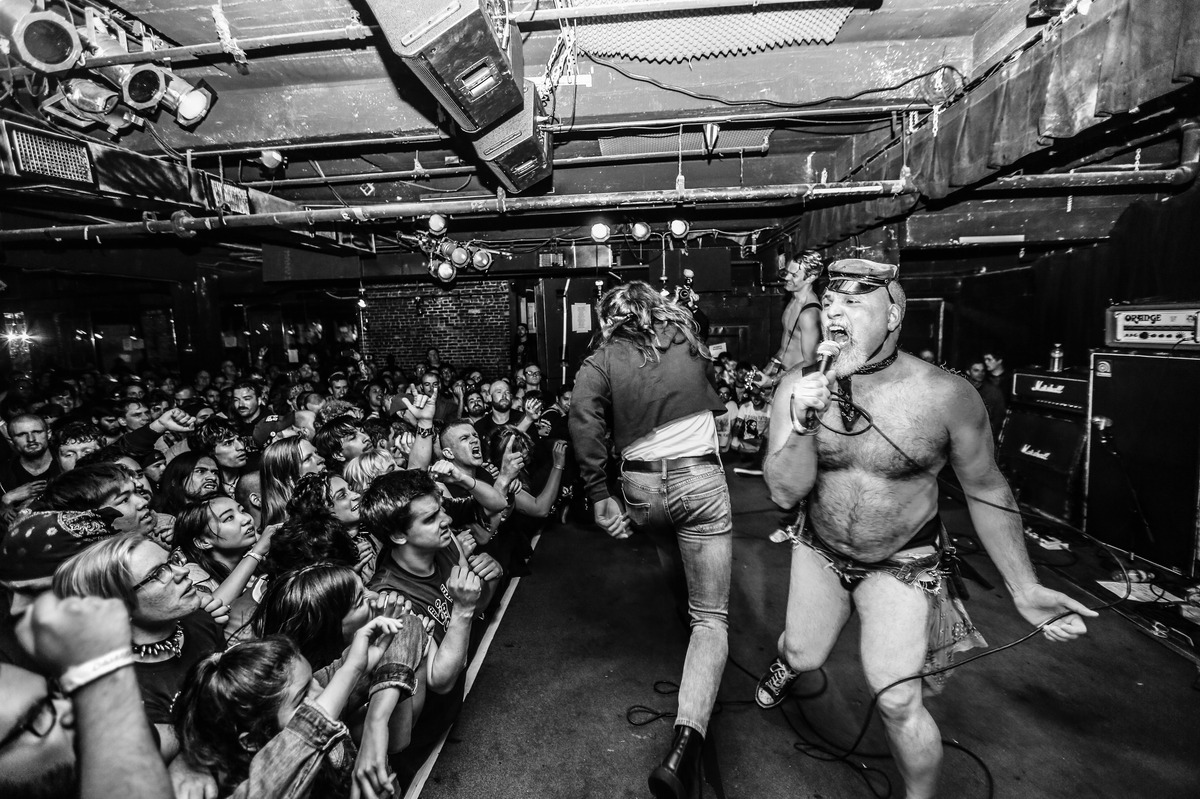 Turnstile's music swirled just as much as it pounded, turning some of the stranger, studio-driven moments of its recent album Time & Space into a live-action stage match. As the band explored every inch of the worn hardwood at All Souls Unitarian Church in Northwest Washington, D.C., stirring up heart rates and exalting the moment, one body would jump from the stage and be immediately replaced by another, all in constant motion. But when a dude leapfrogged over vocalist Brendan Yates' head into the mosh pit, I got a look at the crowd — blacker, browner and with more women than any I'd seen at Damaged City fest in the past — that caught him. Despite the volume of Turnstile's turnt-up hardcore jams, the moment felt quietly radical.

Damaged City began six years ago as a way to celebrate and cement the burgeoning hardcore punk revival taking place in D.C. Bands like Negative Approach, Dropdead and Coke Bust gathered for a non-sponsored, all-ages event that felt like a house show expanded in size and scope and spread out over two days. It was thrilling to experience the inception of a homegrown event with the potential to bring in a worldwide punk community. But just two of the bands that first year, Hysterics and Sick Fix, featured any women, a disparity mirrored in the crowd that attended. For much as the community talks about inclusion and safe spaces for women, non-binary people and people of color, the reality remains that punk — at shows, in critical media, on label rosters — is still very much a moshing ground for white men, myself included.

At the 2018 event this weekend, I saw a Damaged City beginning to reflect the city whose initials it cleverly bears — with a younger, more multicultural and gender-fluid crop of artists and attendees leading the way. This year you could pogo to the Parisian oi! punk trio Rixe and join the pit mayhem of U.K. hardcore bruisers The Flex, but more women and POCs ran to the front of the stage to scream along in Spanish to Exotica, fronted by the fierce Lauren Gerig; grab the mic from Brown Sugar's Eddie P as he leapt into the pit; and, in a moment of much-needed levity, sing along with Lauren Shusterich during dream-pop band Wildhoney's earnest cover of Sixpence None the Richer's "Kiss Me." (It's not all hardcore all the time at Damaged City.) 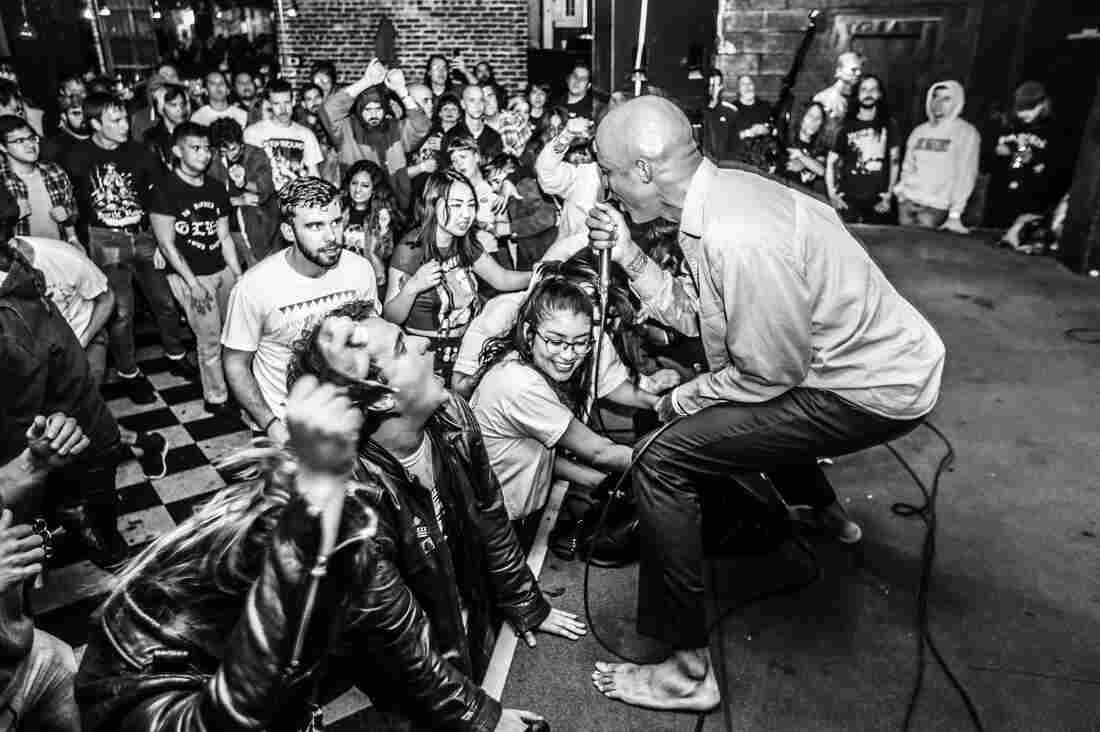 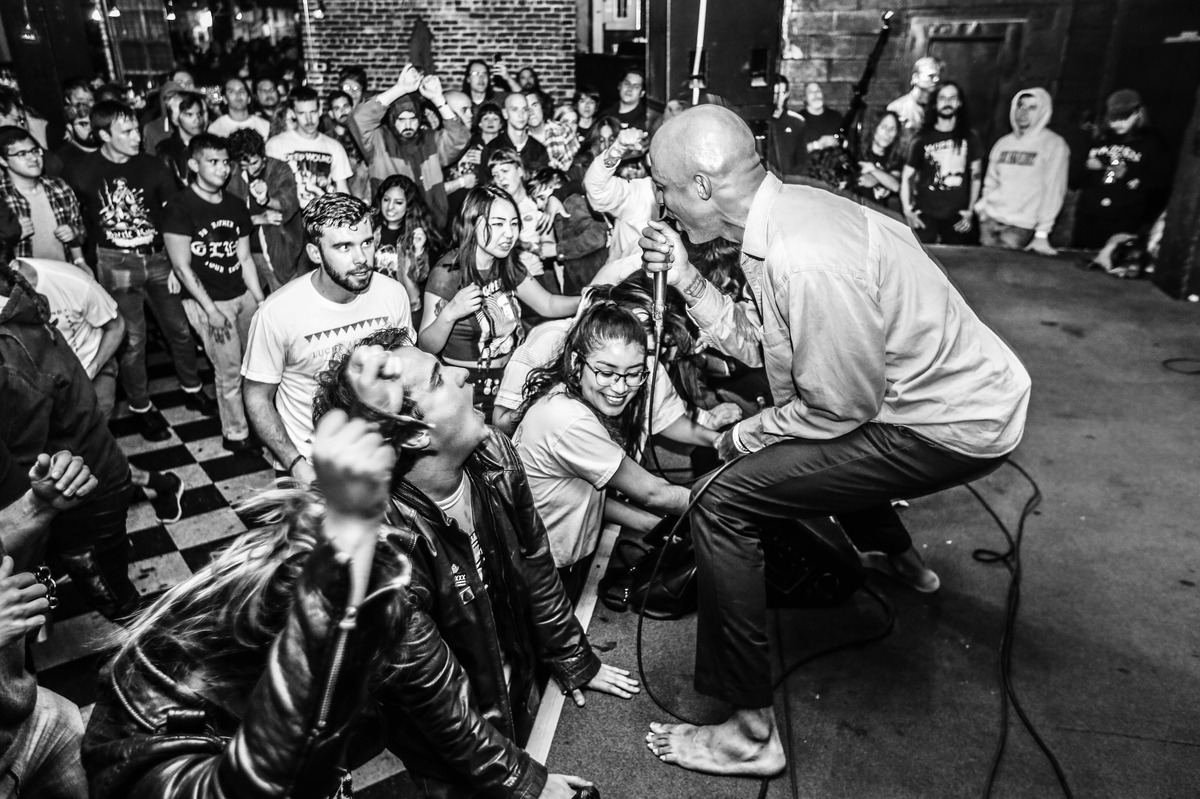 With growth comes change. This is the first year that the bulk of Damaged City hasn't been housed at St. Stephen's Episcopal Church, a key location in the history of D.C. hardcore. The church's auditorium is a punk equalizer of sorts — no booze, no drugs, no jerks — where minors and the straightedge true mosh alongside poisoned heathens. For the committed, the only way to get a beer is to run off to a nearby bodega and chug a tallboy in a brown paper bag before coming back inside.

But the festival has outgrown its pew benches: Besides Turnstile's raucously fun record release show at All Souls on Thursday night, this year the main action happened at Black Cat, a soon-to-be three-level venue whose rough edges are an endearing sore thumb in the increasingly gentrifying U Street District. On a practical level, the new setting made for a far more efficient event — quicker set transitions, better sound — and when the pit teetered into unchecked male aggression, it didn't hurt to have a paid staffer tell a recklessly violent stage-diver to calm down or get kicked out. Moreover, the venue's freight elevator sends a welcoming message to the disabled, who are often literally unable to participate in a DIY culture that largely takes place in basements and living rooms, with tight corners and no ramps.

Perhaps the best way to reinforce inclusion is to celebrate it loudly. During its headlining set on Saturday night, Limp Wrist — the outrageously, unapologetically loud-as-hell queercore band — gave something of a benediction between furiously fast songs and sassy quips. "I had a nice time with a man earlier," vocalist Martin Sorrondeguy said between sets, dressed in daisy dukes and leather straps, as a whoop went up from the crowd. He gave it a beat, and walloped the punchline: "I like hardcore punk, but I like hardcore sex better." You could have sworn you were in a sports bar claiming a hometown victory; the joy was deafening. One song later, he took off his leather-daddy hat only to reveal a smaller leather-daddy hat. It was the funniest thing I've seen on a punk stage in ages.

But then, with the lived wisdom of an elder queen, Sorrondeguy turned tender, giving a brief history of being queer and Latino in hardcore, detailing his struggles not only within the scene but with his parents. He expressed pride and love for fellow queer artists, and excitement for the increasingly vocal transgender punk community. "Show me the real you. Be vulnerable," he said, words that promised to reverberate beyond the Black Cat's checkered floors. Vulnerability is at the crux of punk: Outcasts put themselves on the line to express frustration, hardship and love in stories about getting messed up, going straight, staying true and screaming for revolution. The pit is just the physical manifestation of that rage and joy, but it matters who shows up. 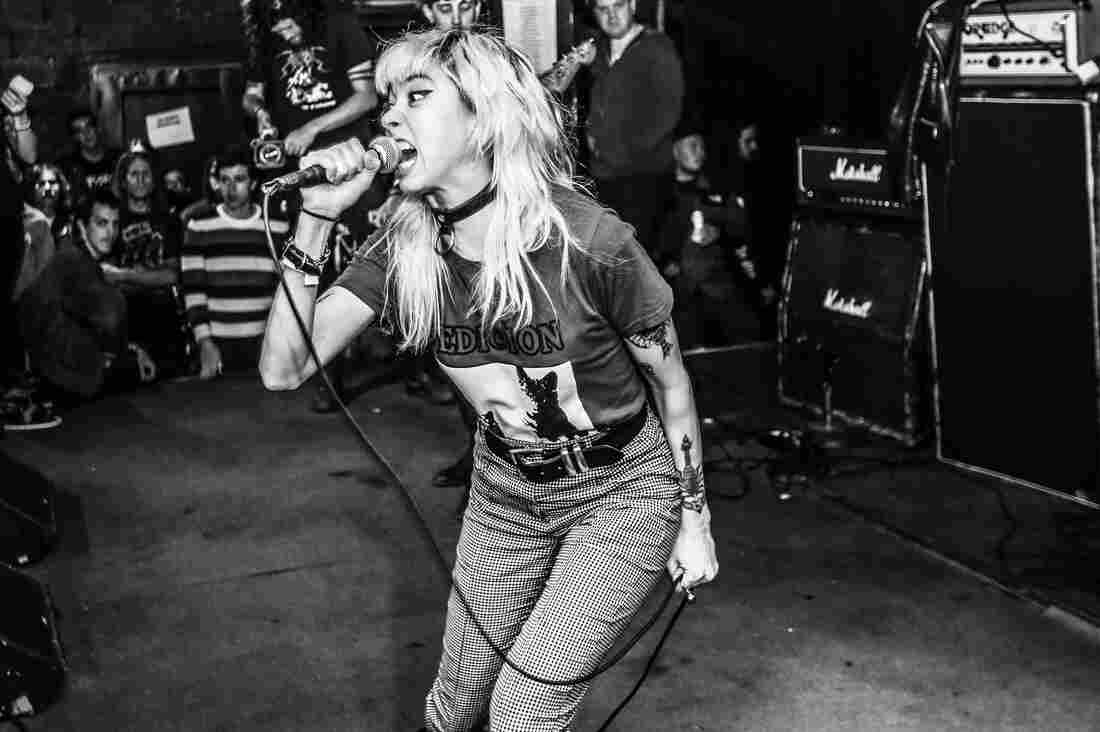 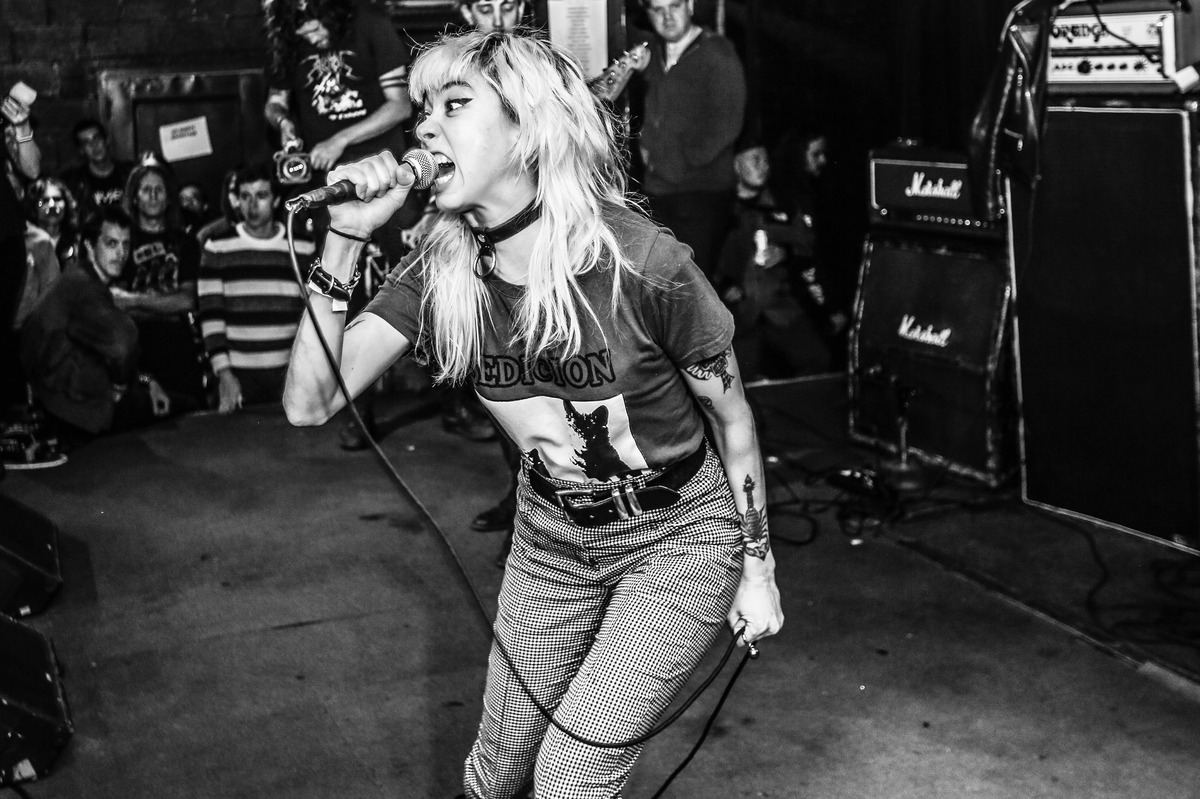 The 6 Best Sets I Saw At Damaged (You Know, Besides Turnstile And Limp Wrist)

Abuse of Power: There is a very distinct sound to mid-'90s hardcore: metal-tinged riffs, chugging rhythms, gang vocals on every chorus and breakdowns built for opening up the pit. This is the formative music of my youth and Atlanta's Abuse of Power absolutely nails it.

Nosebleed: In lesser hands, this kind of raw and boot-stomping D-beat hardcore might come off unremarkable — but there's a little bit of garage-rock swagger to give this Richmond, Va. band's nihilism a booty shake.

Firewalker: Somewhere between my first Firewalker show a few years ago and this year's set, the band got a new drummer, redoubling the panicked power of its guzzling, brutal hardcore. Sophie Hendry barked like a death-metal brawler, two-stepping and hopping around the stage as her pigtail braids bounced along.

Exotica: Before Exotica took the stage, I watched the guitarist fiddle around with the backline Marshall amp's settings to get just the right amount of treble skree. The result was noisy, off-kilter, snarling hardcore, as vocalist Lauren Gerig spit lyrics in Spanish and English with eyelinered eyes wide open.

Brown Sugar: Brown Sugar has a new record on the way, the Dead-punning Long Strange Drip, and if its bruising and wildly fun set at Damaged City was any indication, the Buffalo band has turned its deranged punk and roll a touch more psychedelic.

Witchtrial: Some of the best recent metal bands from D.C. have burst from its young hardcore scene, whose creativity has felt boundless of late. There's Red Death and Genocide Pact, and now Witchtrial, a riotously dirty punk band indebted to Motorhead's party gruel.

BiB: Show me a three-guitar hardcore band and I will be front-row. Make the riffs a little sludgy with a tinge of beer-soaked party vibe and a vocalist howling through copious amounts of echo, and I will make up my own lyrics to shout along.