Accessibility links
J. Cole Is Sick Of Money Phone Rap And He's Not Going To Take It Anymore : All Songs Considered The first video from his new album KOD features the North Carolina rapper parodying trap's infatuation with cash and drug-addled fantasy.

J. Cole Is Sick Of Money Phone Rap And He's Not Going To Take It Anymore

J. Cole Is Sick Of Money Phone Rap And He's Not Going To Take It Anymore 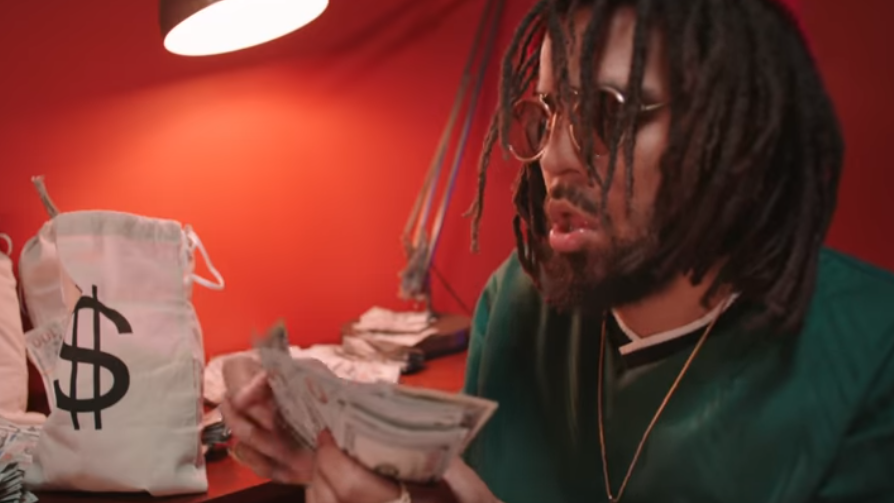 J. Cole may be the most divisive figure in hip-hop today. That's saying a lot in an era frequently trashed as mumble rap. He's also among the most successful, despite his antithetical approach. It's an odd paradox. No one stirs up such an intense mix of love from fans who praise his earnest conviction and LOL's from detractors who dismiss his heavy-handed messaging.

That hasn't stopped Cole from digging deeper into his everyman bag. His new LP, KOD, is the latest case in point. The culmination of a week-long secret rollout that has become his M.O., the album's themes were first teased at a surprise listening session where he literally spelled out the meaning of the album's interchangeably titled acronym: Kids On Drugs, King Overdose, Kill Our Demons. It's clear that Cole is out to send a wake-up call to the current hip-hop generation overrun with opioid addiction, sexual conquests and money phones.

The album's first visual, for the song "ATM," drives the point home in blatant and cartoonish fashion. Cole satirizes trap's one-note tropes by portraying a rapper whose cash runs out faster than his fantasy.

Directed by Scott Lazer and Cole, it's a technicolor morality tale that highlights what happens when we fall for the proverbial slice of devil's pie. And if the YouTube comments below it are any measure, it's sure to be equally loved and loathed.

"We don't deserve J. Cole. This album was recorded in two weeks," a commenter with the username Baby Goat praises; followed by another commenter with a pointed critique: "No hate but it shows."

But Cole is probably too focused on conveying his message to absorb such casual condemnation. Ironically, the same can probably be said for the rappers he's parodying. Meanwhile, Vevo's advertising algorithm apparently sees little distinction between the two. After streaming Cole's new video, the video platform follows it up with an ad for trap-flavored rapper Rich The Kid.