Accessibility links
Natural Born Leaders Turn A Tiny Convenience Store Into A Tiny Desk Contest Entry : All Songs Considered The Asheville band were the only ones of nearly 5,000 Tiny Desk Contest entrants to play in a convenience store. Lead vocalist Mike Martinez says that setting is more poignant than you might think. 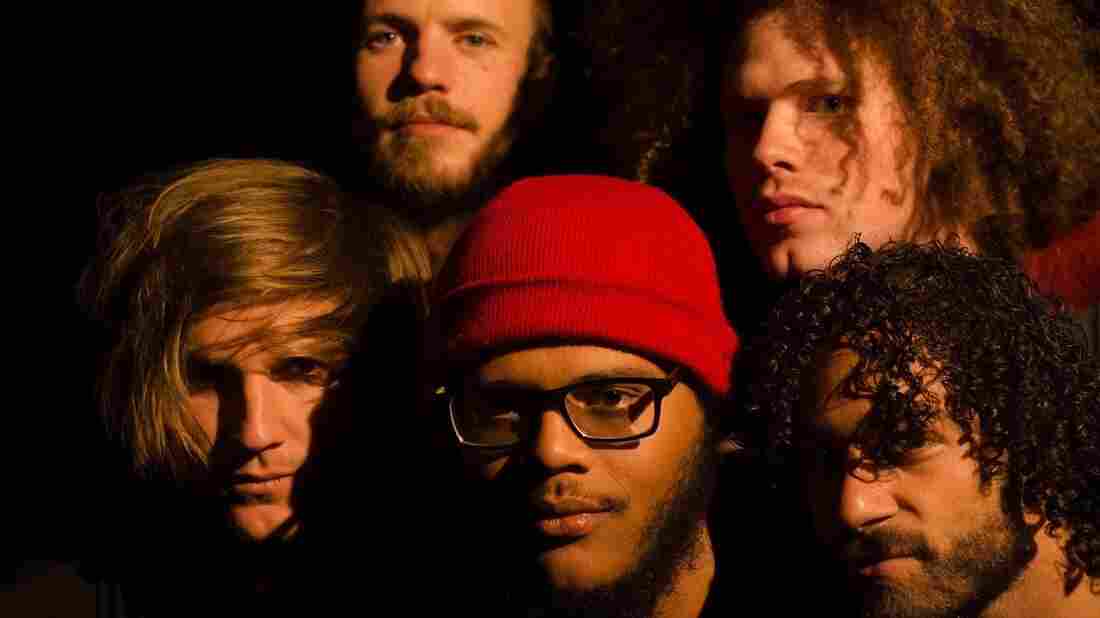 Natural Born Leaders released its first EP About Time independently in May. Michael-Jamar Jean Francois/Courtesy of the artist hide caption

There were nearly 5,000 entries to this year's Tiny Desk Contest. While NPR Music selected Los Angeles guitarist Naia Izumi as its 2018 winner this year, there were scores of contestants that impressed the judges with their music, their desks and for Asheville, N.C. band Natural Born Leaders, their convenience store.

For the Tiny Convenience Store Concert, the band packed behind the ice cream freezer, just to left of the Slim Jims to play the original song "Abominable Creatures."

"I was trying to stray away from the beer cooler," lead vocalist Mike Martinez jokes, though he says the store actually provided the perfect setting for a song that reckons with his experiences of his childhood in New Jersey.

The convenience store as an institution was an ubiquitous constant across the suburban landscape of "Newark, New Jersey, Irvington, New Jersey, Elizabeth, New Jersey" that he grew up in. Martinez's lyrics grapple with growing up in the obscurity of the area, trying to seize his "one chance / to stand up to these wicked man-made plans" of racism, sexism, and every other -ism stacked against a young person's future.

"I feel like I had no real direction in New Jersey. I've heard a lot of people talk about after coming to Asheville, they kind of felt like they had a purpose," Martinez says of the city he now calls home. Once in North Carolina, he got involved in the local music scene and started Natural Born Leaders. "Everything seems to be falling into place ever since I came down here."

The song "Return of Jafar" off Natural Born Leaders' newest EP About Time speaks to the community Martinez found in Asheville. He took the song's chorus — "There ain't no power like the power of the people because the power of the people don't stop" — from a protest chant, thinking it'd be the perfect fit for a song that deals with war, racism and greed. Martinez says Asheville is the perfect place for music that approaches politics like this.

"It's a huge music community and there's no nations and borders," he says. "Everybody's helping each other out ... [That's] the only reason why we're doing what we do right now."