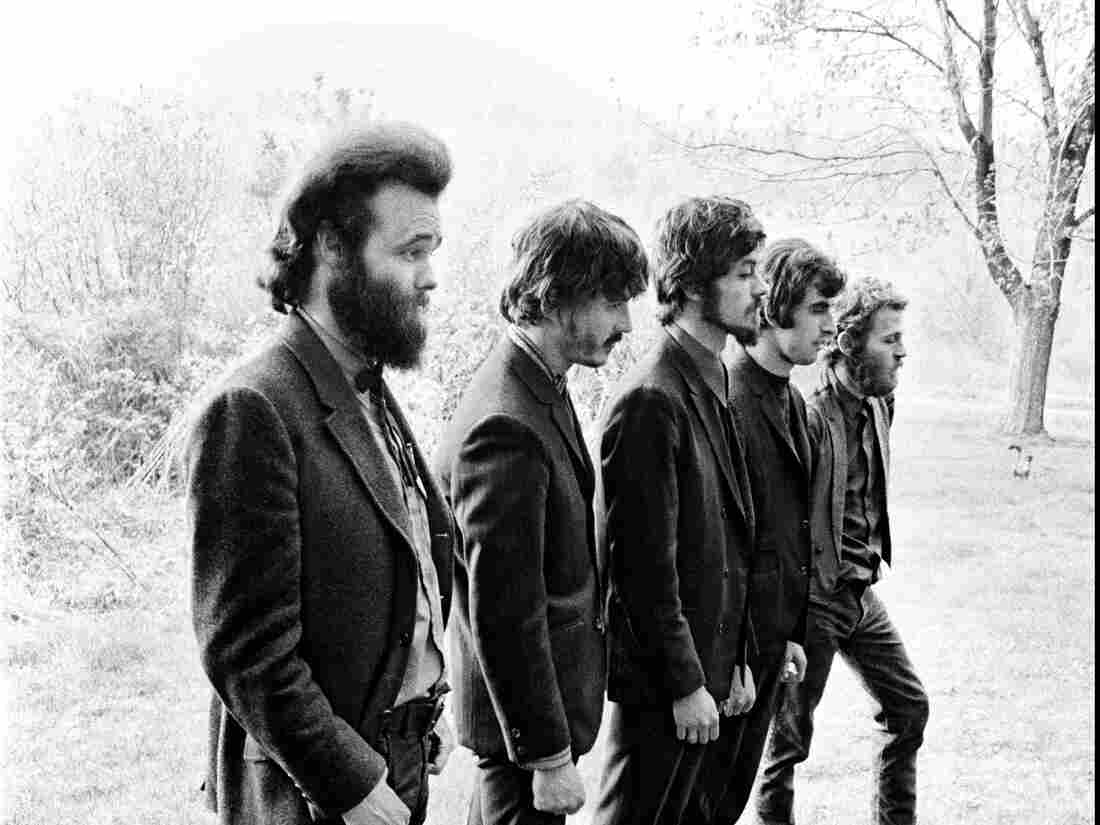 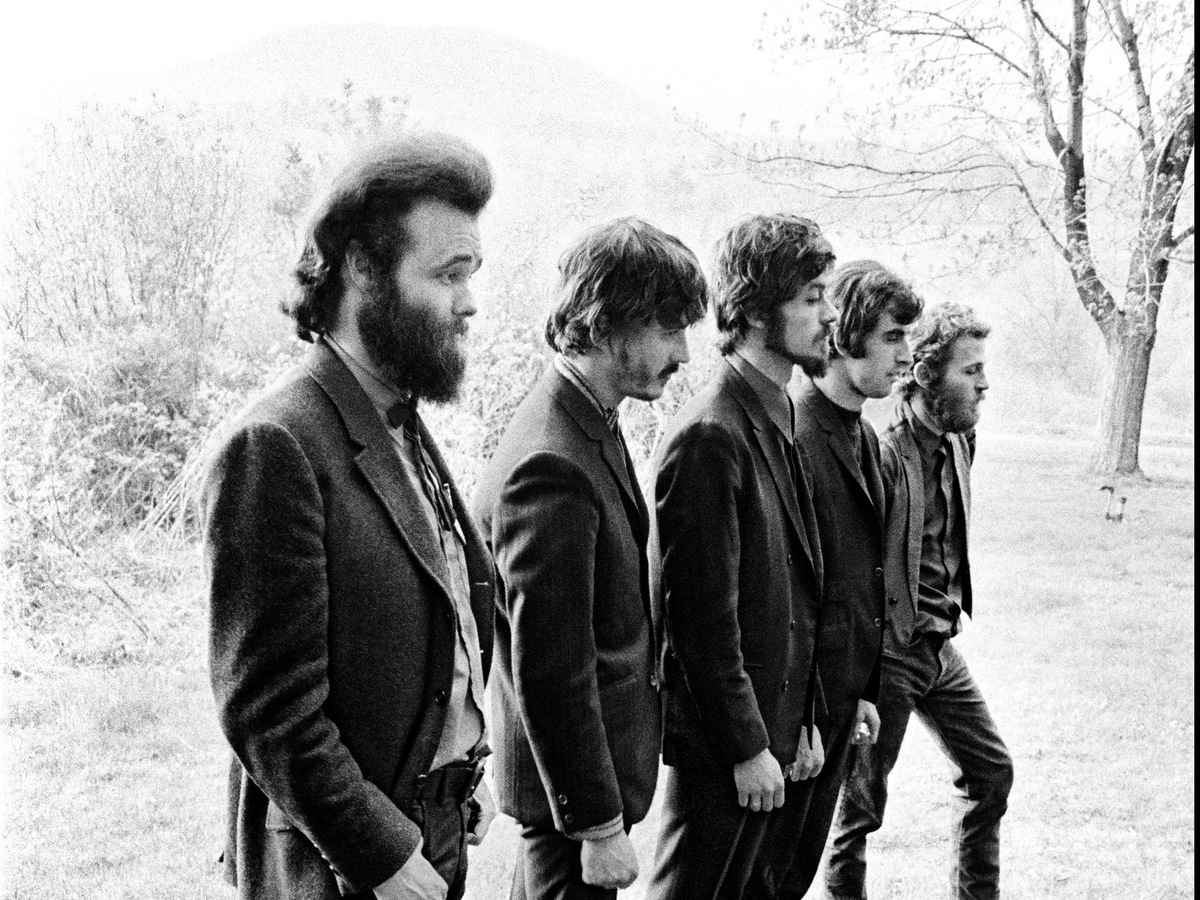 Today, The Band's Robbie Robertson is going to take us back 50 years, to a basement just outside of Woodstock, New York and the formation of a sound and an album that all these years later still shapes the musical landscape.

The album is Music from Big Pink and the band is, of course, The Band. (Its generic name came from the fact that in the early '60s they were a backing band, supporting the rollicking rockabilly artist Ronnie Hawkins. The group — Canadians Robbie Robertson, Garth Hudson, Richard Manuel, Rick Danko and the kid from Arkansas, Levon Helm — was then known as The Hawks.) 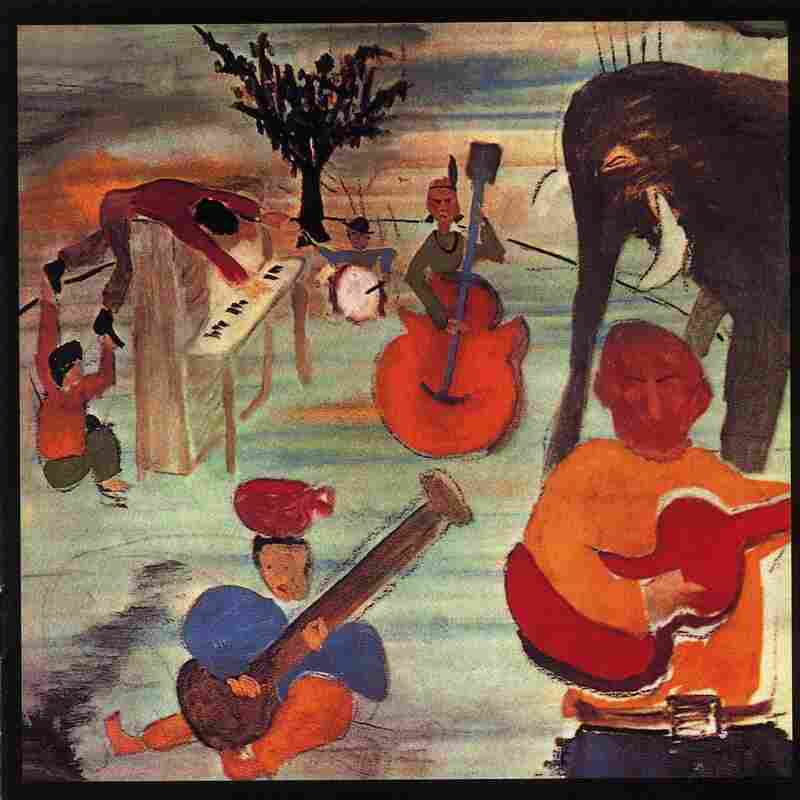 In 1965-66, the group got to work backing Bob Dylan on his world tour; afterwards, they (and Dylan) found refuge in the basement of a home in West Saugerties, New York. The house, with its salmon-pink siding, became known as "Big Pink."

When Bob Dylan wasn't around Big Pink, The Band began to flesh out its own sound and, in 1968, went to a studio in New York City — and later, studios around Los Angeles — to record their first album, Music from Big Pink.

That landmark record turned 50 years old at the beginning of July, and is now getting an anniversary re-release on August 31, with new mixes (including a 5.1 mix), a book and so much more.

We spoke with Robbie Robertson about the recording process of The Band's debut record, the Dylan sessions and the upcoming reissue.

It was very unimpressive visually. It was like a cellar — any cellar was a big dream of mine, to have a place like this; to have a workshop, a clubhouse, a creative space. We got this basement and we set up the equipment — and I thought: "Wow, my dream has come true."

There was an engineer friend of ours that mixed live music and he and a recording studio engineer and everything ... he looks at it and he says: "Oh, this is going to sound terrible. You know, this is the worst circumstance I've ever seen for making music." And I thought: "What? Did you just completely rain on my parade?"

On their first recording session for 'Big Pink,' at A&R in New York

This studio was known to have the best sound of any studio around, and we were honored to be able to be there. So we did exactly what they said. It felt awkward — we can't see one another. We are communicating through microphones and headphones. So I said: "This doesn't work. We have to set up in a circle so we can see one another so we can communicate musically." That's all we had been doing for seven years before this time came. We started playing "Tears of Rage." We go in and listen. And it is the first time we hear the sound of The Band. This is the way we sound like. And it was like, that's it.

On the 50th anniversary reissue

When the record company said it was going to be the anniversary of Music from Big Pink and we're going to do this special collection of it, they said: "Who would you like to do this?" And I've worked quite a bit over the years with Bob Clearmountain and I know how much he had revered this record. What he did was take us deeper into the sonic experience of that. In the process, he would do a mix and send it to me. I'd have comment. We'd go back and forth until we got to the place where it really felt like you were sitting in the room with these guys while they play this music, and it just wrapped around you.