Accessibility links
No Translations Needed At globalFEST 2019 : All Songs Considered New York's exuberant and smartly programmed annual showcase of musicians from around the world often yields us some of our favorite artist discoveries. The 2019 edition was no exception. 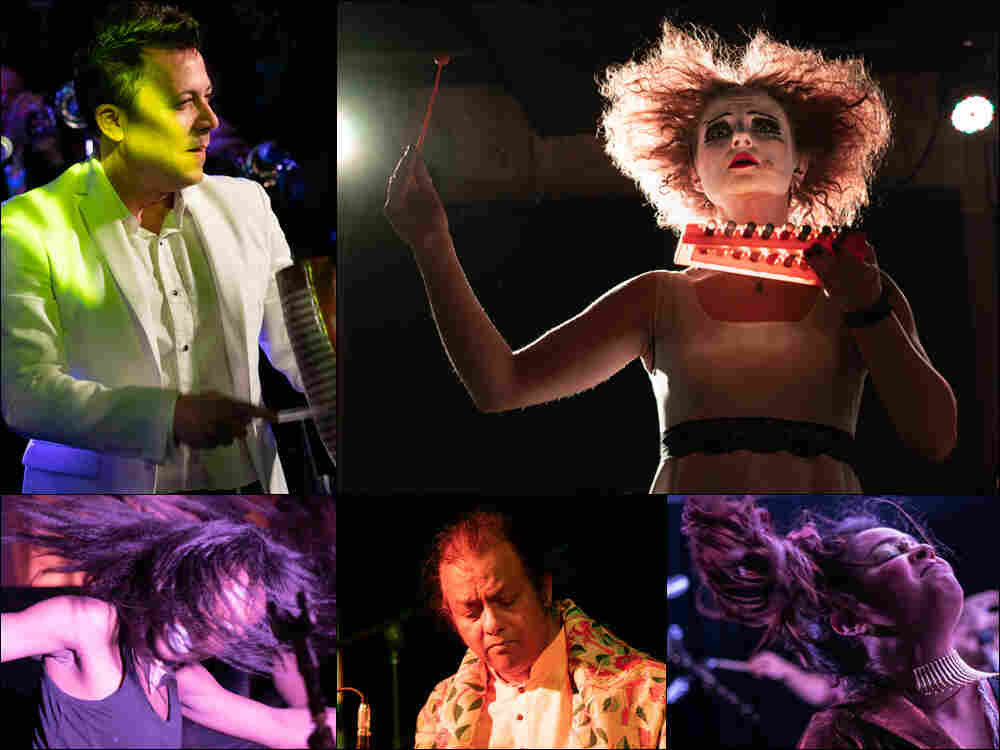 Amidst the constant drumbeat of 2019's political talk, of raising walls and shutting out opposition — this year's globalFEST artists and organizers articulated a very clear vision, one that makes room for bracingly new voices. The one-night festival of global music, held each January in Manhattan, featured a remarkable lineup of musicians from around the world, including India, Cuba, Ukraine, Mozambique, and even New York City itself. Now in its sixteenth year, globalFEST was founded in a post-Sept. 11 era when foreign musicians often struggled to tour the U.S., due to what organizers perceived as a time of increasing xenophobia. But securing visas in difficult times is one of the things that makes globalFEST a special event — the overtly political, Jordanian Palestinian band 47Soul, who performed at this year's festival, was a shining example of that. They, along with the other artists who performed at Sunday night's event seemed to find meaning and inspiration in connections to the past while clearly — and very pointedly — pushing ahead.

Three strikingly different acts invited to this year's globalFEST, which was held this year at the Copacabana nightclub in Midtown, celebrated their respective "futurist" visions. Combo Chimbita, a quartet of first-generation New Yorkers who layer the sounds of Colombia amidst a haze of glittering costumes and roaring vocals, call their style "tropical futurism." Jeremy Dutcher, the Polaris Prize-winning singer, composer and musicologist from Canada, who draws upon his First Nation heritage, talks about infusing his music with the philosophy of "indigenous futurism." And Gato Preto, a sleek German-based duo who mix a panoply of African styles — from Mozambique, Angola, Ghana, Senegal and beyond atop four-on-the-floor beats — call their music "Afrofuturist global bass." Clearly, the future is now.

One element of the 2019 edition of globalFEST went awry: The evening's planned closer, the venerable calypso king Mighty Sparrow had to cancel, due to illness.

On this episode of All Songs Considered, host Bob Boilen is joined by NPR Music's Anastasia Tsioulcas, WFMU's Rob Weisberg, host of the show "Transpacific Sound Paradise," and Beat Latino's Catalina Maria Johnson to talk about the most memorable moments and sounds from this year's globalFEST. 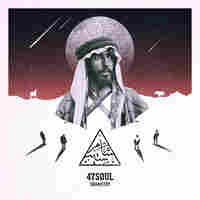 This quartet of guys who are members of the Palestinian diaspora (two from Jordan, one raised in Washington, D.C. and one in Israel) layer the dabke beat — which has powered the dance moves of the Eastern Mediterranean for at least hundreds of years — with synths, raps, drum machines and ebullient choruses sung in both Arabic and English. With lyrics that are at once intensely political and sweetly universal, this is one "smart party band," as contributor Rob Weisberg says. 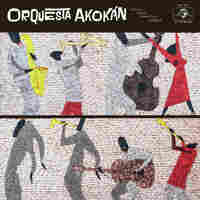 This powerhouse big band, comprised of a blend of Cuban musicians and self-styled "Latin music freaks" from New York, revels in the lush, plush sounds that made Cuban artists like Machito and Mario Bauza famous at New York nightclubs and with American music fans in the 1940s and 1950s. When globalFEST decided to host this year's edition at New York's Copacabana nightclub — a venue with a history that stretches back nearly 80 years and boasts a long association with Latin music — the festival's organizers decided that Akokán had to be the first group they invited this time around. 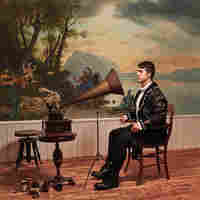 The kind of work that the Polaris Prize-winning Dutcher makes is perfect for a certain and very current artistic moment: dreamy and intensely ambient music that will appeal to fans of artists like Max Richter and Ólafur Arnalds. But there's a whole lot more going on beneath the surface: Dutcher matches his classical vocal training with the language and songs of his First Nation people, the Wolastoq of eastern Canada — and performs achingly beautiful, time-crossing dialogues with his ancestors by sampling 110-year old wax cylinder recordings of other Wolastoqiyik singers in his own work. The ease of Dutcher's sonic textures belie the urgency of his mission: it's believed that there are only about 100 speakers of the Wolastoqey language in the world today. 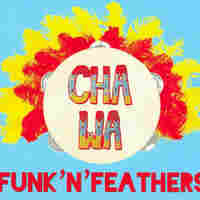 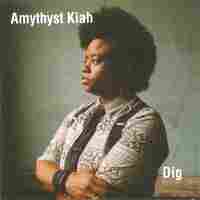 "Southern Gothic, alt-country blues" is what this Tennessee-based singer-songwriter calls her work, which is a fluid combination of her own, wry material and reverent (but bracingly fresh) covers of the music she's inherited, from the folk song "Darlin Corey" to the work of blues masters like the Reverend Gary Davis to Dolly Parton's "Jolene." But what will really stop you dead in your tracks is her voice, which manages at once to be butterscotch-rich and still cut like a knife. 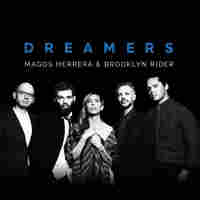 An inspired partnership between the Mexican jazz singer and the classical-and-beyond string quartet led to one of our favorite albums of 2018, the ineffably lovely and very timely Dreamers, a collection of texts from great Latin American poets and songwriters. Heard live (and joined by percussionist Mathias Kunzli, who also appears on the album), their performances were just as deeply felt, but they're much better suited to a cozy room than to a barely insulated "rooftop" space at the Copacabana that they were afforded at globalFEST. Even so, the musicians transcended the limitations of the space, and soared far above even the Manhattan skyline. 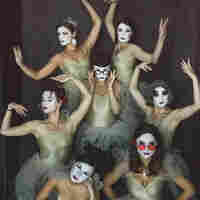 If you're already acquainted with the Ukrainian group DakhaBrakha (that fierceness! those hats!), you might have an idea of what the female troupe Dakh Daughters — born out of the same arts center in Kiev — might have in store, with a similarly heavily stage-crafted presentation, this time with each performer's face painted not unlike a porcelain doll. (Don't let that mask of fragility fool you, though.) But this punk cabaret act is a more purely performative experience, melding theatrical monologues with intricately harmonized Ukrainian folk music. 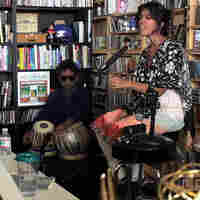 This Calcutta-based slide guitarist is a perennial NPR Music favorite and Tiny Desk alumnus. He's meshed his youthful fascination with Hawaiian steel guitar and love of the blues with the architecture and vocabulary of Hindustani (North Indian) classical music. The result is intoxicating — and, as you can hear in his 2013 Tiny Desk Concert below, brilliant. 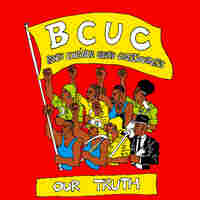 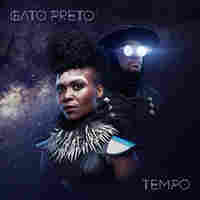 Afrofuturism is now, in the hands of this Dusseldorf, Germany-based duo. They draw upon the sounds of Mozambique, Ghana, Senegal, Angola and Portugal to make pulsating, four-on-the-floor club beats. 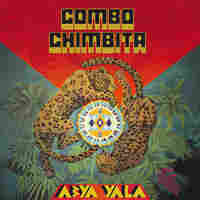 This New York-based band delivered a high-octane dose of a style they've dubbed "tropical futurism" to close out the night. They blend Afro-Caribbean sounds with cumbia, psychedelia and even a hint of prog rock, all metabolized by frontwoman Carolina Oliveros' muscular voice and her frenetic playing of the guacharaca, a scraped percussion instrument.