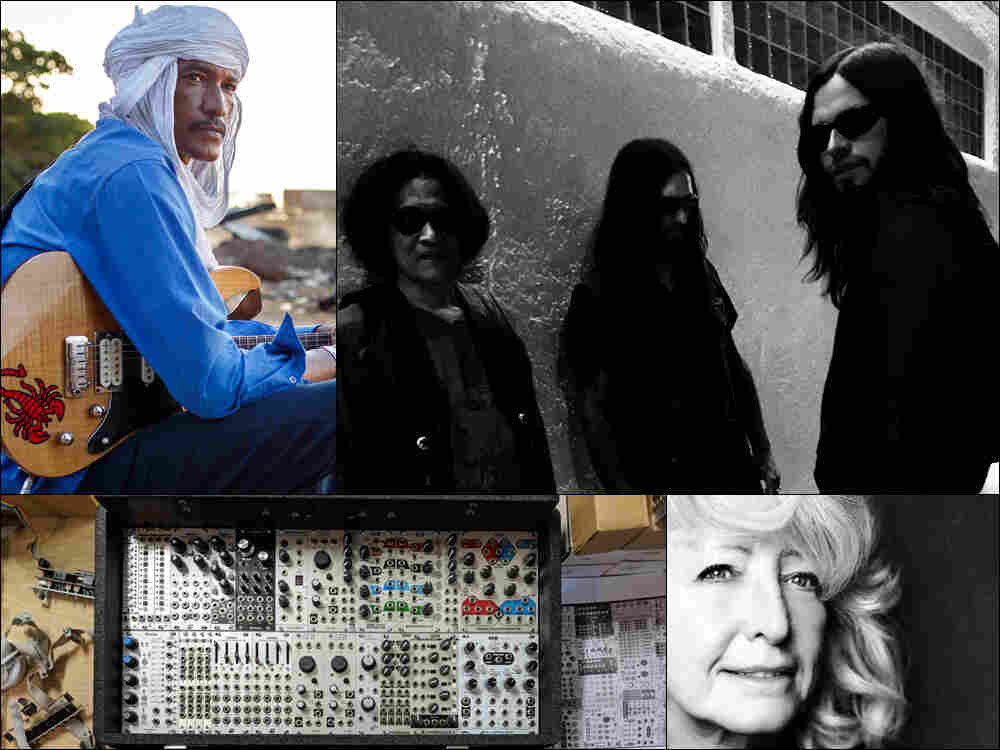 On this episode of All Songs Considered, Bob Boilen and I talk about the music released in the first part of 2019 that soundtracked nap time, quick rides to the grocery store for eggs (and an excuse to get out the house) and whatever else perked my ears while blissfully stuck to the couch with a sleeping babe. There are buzzing Ethiopian hymns and Tuareg folk songs, but also white-hot psych-rock and anguished black metal when I just needed some paternal catharsis. -- Lars Gotrich

Munehiro Narita plays the guitar like it's about to blow up. Since the early '80s, every record he's put out with the Japanese psych-rock band High Rise lists his instrument as "motorcycle fuzztone." He pays tribute to that signature squeal with Psychedelic Speed Freaks — both the original name for High Rise and a tribute to the P.S.F. label that released its wild music — featuring a young, ripping rhythm section out of L.A.

The begena is an Ethiopian stringed instrument that buzzes deeply, used during meditation and prayer. It's also called the harp of David, which he played to sooth King Saul. These Ethiopian hymns sung and played by Sosena Gebre Eyesus hum at the soul's most hushed frequency, offering lullabies for the unrested.

In the week following the death of Talk Talk's Mark Hollis, I sought out unmapped, yet deeply seeking music and found it in Catherine Watine. There may not be direct parallels to Spirit of Eden or Laughing Stock, but the French composer comes at Géométries Sous-Cutanées from a post-pop perspective, absorbing Satie-like patience, chill downtempo beats, punk chaos and expectedly (but not obviously) proggy grandiosity in a billowing cloud.

Keith Fullerton Whitman is both a traditionalist and an innovator of electronic music, finding different ways into machines with a lot of history. He's been revisiting some old methods of his, including the processed guitar of the nearly 20-year-old Playthroughs system and the Generators modular synth path. The results, particular on Generators, are frenetic, glorious.

If only all anguish sounded this pretty. Alcest and Deafheaven helped pioneer and popularize blackened shoegaze, respectively, but few have thought beyond its path like Griefloss. Full disclosure, the band's main songwriter Ben Polson is my barber, but few metal records have stuck with me like this one in 2019, with its aching melodies battling tortured electronics and wound-opening riffs for dear life.

From Sahel Sounds, the same label that brought you one of the year's best rock records — Mdou Moctar's endlessly ecstatic Ilana (The Creator) — comes a quiet folk record made in exile. Ahmed Ag Kaedy, like many other Tuareg musicians, cannot go home to the war-ravaged Northern Mali. In recordings captured on cassette tape, Akaline Kidal is naked in its intimacy, as Kaedy mourns his homeland with an acoustic guitar attune to a bereft heart.

I love a project that sees disparate talents and wonders what can happen. Mark de Clive-Lowe, a half-Japanese/half-New Zealander musician and composer based out of L.A., straddles several music worlds on the regular. (In fact, I highly recommend watching this short documentary about Mark de Clive-Lowe made by our own Jazz Night in America team.) With the Ronin Arkestra, he brings together some of the best musicians in Tokyo's jazz and electronic music scenes, inspired by, yes, the Sun Ra Arkestra, but also Japan's rich jazz history and the cosmic energy of John Coltrane and Pharoah Sanders. A striking first meeting, and hopefully one of many to come.