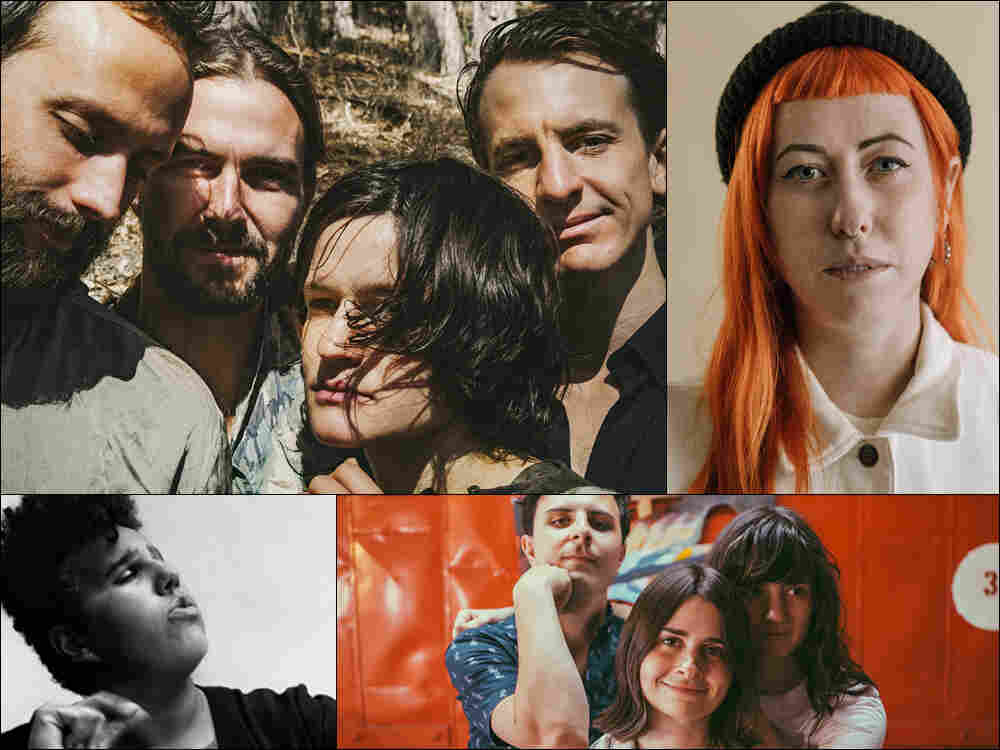 Bob Boilen and I are back together again to share some of the phenomenal new music we've been hearing, starting with Brittany Howard's stirring and inspired "He Loves Me," from her upcoming solo debut Jaime. She named the album after her sister who passed away when they were both teenagers. The music is a celebration of the human spirit.

Also on the show: Big Thief surprises us with the band's second album of 2019 and this one is fierce; Bob is back from the DIY Musician Conference with a couple of discoveries: a playful, idiosyncratic British artist known only as EB and the singer-songwriter Anna Larson, who has a powerful reflection on mass shootings called "Acting Alone."

We've also got new cathartic sounds from The Messthetics, the Philadelphia-based band Queen of Jeans and more. -- Robin Hilton

1. Brittany Howard: "He Loves Me" from Jaime

Brittany Howard, best known for fronting the band Alabama Shakes, will release her debut solo album, Jaime, on Sep. 20 on ATO Records. She says this track is "is a song I deeply want to share to help others realize loving and being loved by God doesn't have to look the same for everyone."

Big Thief has just made the band's fiercest album yet, coming only three months after U.F.O.F. The band recorded this just shy of the Mexico border outside of El Paso, massed together in a room, playing live with few overdubs. Two Hands is due out Oct. 11 on 4AD.

3. Queen of Jeans: "Get Lost" from If You're Not Afraid, I'm Not Afraid

Queen of Jeans is a Philadelphia-based band fronted by singer Miri Devora who says this song, "Get Lost," is about giving yourself the time and space to heal in times of personal and political upheaval. The group's latest album, If You're Not Afraid, I'm Not Afraid, is out Aug. 23 on Topshelf Records.

Emily-Beth Hill, known as the artist EB, has a humorous take on a serious matter. Her song "La Criox" (intentionally misspelled) is a song about the sacrifices we all must make to follow our hearts and achieve our dreams. For Emily-Beth it was about getting serious about making music.

Shannon Lay is a singer-songwriter based in Los Angeles. The title to her sophomore full-length is a reference to the month she decided to quit her day job and devote herself to her music full-time, back in 2017. "Nowhere" is a song about living in the moment without fear of where the road you're on may take you. August is out Aug. 23 on Sub Pop.

Anna Larson wrote [Bob Boilen] to say, "I wish I didn't live in a world where writing a song about senseless gun violence was something I had to do." But "Acting Alone" is a poetic and powerful approach to an all-too-common event. The song was written to benefit Moms Demand Action.

Francis Lung is the musical project of Manchester's Tom McClung, the former bassist for the now-defunct band Wu Lyf. His debut album, out now on Memphis Industries, is a collection of classic pop gems, with sweet harmonies, infectious melodies and wistful reflections on life and love.

The Messthetics make instrumental music that's a sonic adventure, and those adventures feel like a friendly challenge to both the listener and the musicians. Two of those musicians, Brendan Canty (drums) and Joe Lally (bass), were the backbone of Washington D.C.'s legendary band Fugazi, while Anthony Pirog is a man of many facets and his guitar can wail or tranquilize.