Accessibility links
Stream Our Playlist Of The Best New Music : All Songs Considered The tracks Bob Boilen shares on this week's All Songs Considered all have a cinematic quality, from a new Thom Yorke cut for the film Motherless Brooklyn, to Ride's best new album in 20 years. 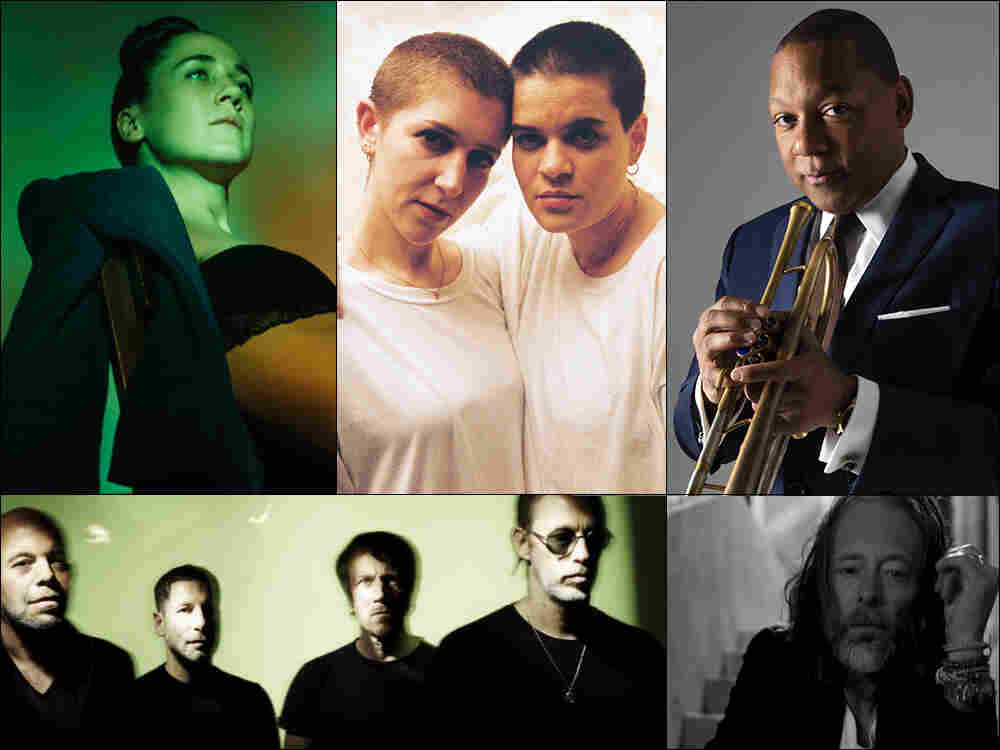 There's a cinematic theme in the songs on this edition of All Songs Considered, including a new track from Thom Yorke called "Daily Battles" and an instrumental version of it from trumpeter Wynton Marsalis. These two songs were created for the Edward Norton film Motherless Brooklyn.

Then there's a new creation from Jim James called "Set it to Song," which he made in collaboration with conductor and musician Teddy Abrams and performed with the Louisville Orchestra.

I also have a new fuzzy guitar tune from one of my favorite '90s bands Ride, a new sound and tune from the duo Overcoats, and my favorite new discovery Arthur Moon, that makes music reminiscent of Laurie Anderson on the song "Myelin." All that plus some "Flames for the Heart" by Seattle singer Lydia Ramsey.

One of my favorite '90s bands is back with their best album in more than 20 years. And though the new album, This is Not a Safe Place, is filled vocal tracks and the band's blurry washes of guitar noise, I wanted to play this primarily instrumental lead-off track simply title "R.I.D.E."

The duo of Hana Elion and JJ Mitchell, known as Overcoats, has music pointing to a newish direction. Their new single is called "The Fool" and it's rougher around the edges. To celebrate their new-found inspiration, they shave each other's heads in this fun new video.

I've fallen hard for an artist who is new to me. Arthur Moon is led by Lora-Faye Åshuvud. The music is ethereal at times and spacious, with lyrics that are often visual, somewhat like an abstract painting. This song from Arthur Moon's debut self-titled album is called "Myelin."

4. Lydia Ramsey: "Story Untold" from Flames for the Heart

I first heard the voice of Lydia Ramsey when the band she sang with, St. Paul De Vence, entered the Tiny Desk Contest in 2016. We liked them so much we had them play on our contest tour when we hit her home town of Seattle at KEXP. Now there's new solo music from Lydia Ramsey; I play the opening track from her new album, Flames For the Heart, called "Story Untold."

5. Jim James & Teddy Abrams: "Set it to Song" from The Order of Nature

There's a magical collaboration with Jim James and conductor, composer and musician Teddy Abrams. The project is called The Order of Nature and it explores what Jim James refers to as a fascination with the absence of hate in nature. There's an entire album of this music coming Oct. 18 on Decca Gold.

This is the first of two songs that are part of a soundtrack to a film by Edward Norton called Motherless Brooklyn. Thom Yorke wrote "Daily Battles" and worked with Flea from Red Hot Chili Peppers who plays trumpet and bass. The song was written for the main character of the film suffering from Tourette syndrome, whose inner thoughts are disturbed and chaotic.

The song appears twice in the film, first as the version from Thom and Flea, and later there's an instrumental version performed by Winton Marsalis. The soundtrack features six more Wynton tunes and a score by Daniel Pemberton. It's out Oct. 25 on WaterTower Music.