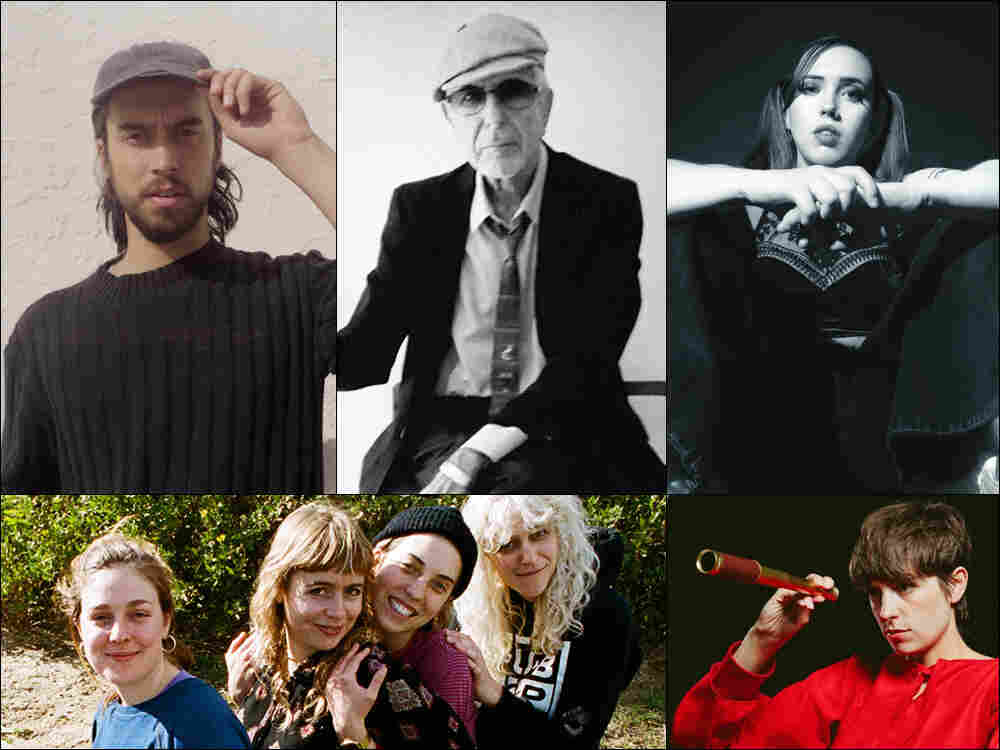 Warning: The opening cut on this week's show, by Fran got stuck in my head and kept me wide awake at four in the morning. But a song from Soccer Mommy about dealing with temptation and the devil, Ruby Duff's "rainbow of emotions," Chastity Belt's first new music since 2017 and (Sandy) Alex G's devastating song titled "Hope" will help when taken at a hefty volume. Once dosed, you will be lulled by the deep, sullen sounds of the late Leonard Cohen and all-new material he recorded before his death. You can top it off with harmonies Christopher Paul Stelling's fine guitar picking and poetry on his new tune "Have To Do For Now," and River Whyless' cover of Bob Dylan's "It Ain't Me Babe."

1. Fran: "Company" from A Private Picture

Fran is the music of the Chicago-based artist Maria Jacobson. While experiencing frustration doing theatre in Chicago, and frustrations with failed relationships, she began to write music almost as therapy. This song, "Company," has been on repeat in my brain for a week but I love it. Her debut album, A Private Picture comes out Nov. 15 on Fire Talk Records.

Here's another brand new artist; her name is Ruby Duff and what struck me about her music was the directness. At times, I felt I was listening to her inner thoughts.

Soccer Mommy is the music of 22-year -old Sophie Allison. She's been putting out music since 2015, self-releasing songs on Bandcamp. This single, "Lucy" (think Lucifer), is about struggling with her inner demons.

Chastity Belt put out a self-titled album last week, the band's first since 2017. Melina Duterte, aka Jay Som, produced it. The closing cut on the record, called "Pissed Pants," is the one that shimmers brightly for me. The album is out on Hardly Art Records.

House of Sugar is (Sandy) Alex G's seventh album and he's only 26. It's an impressive release filled with a lot of sonic detail. This song, "Hope," is musically upbeat but lyrically devastating. House of Sugar is out now on Domino Records.

6. Leonard Cohen: "The Goal" from Thanks for the Dance

There's new music from the late and legendary Leonard Cohen. The album, Thanks for the Dance, is not a bunch of odds and ends or B-sides; these are new songs. Leonard's son, musician Adam Cohen, helped produce the 2016 album You Want it Darker. In all the work they did for that project, there was more left unfinished. Leonard Cohen asked his son to bring these songs to completion. Thanks for the Dance is out Nov. 22 on Legacy Records.

For a song to hold up 55 years it has to be good. On this new version of "It Ain't Me Babe" — a tale of a lover who knows he can't be all his partner needs him to be — River Whyless creates a beautiful rendition with harmony and soul.

8. Christopher Paul Stelling: "Have To Do For Now" (Single)

Christopher Paul Stelling is an intense singer and lyrically has that poetic sense of mystery you can find in the songs of Bob Dylan. Ben Harper produced this new single with an album coming in 2020.