Accessibility links
The 9:30 Club Is 40 Years Old. It's Closed. It Matters More Than Ever : All Songs Considered Musicians, fans, venue owners and employees are wondering what will become of the live music industry following the coronavirus pandemic. Bob Boilen pays tribute to the club that changed his life. 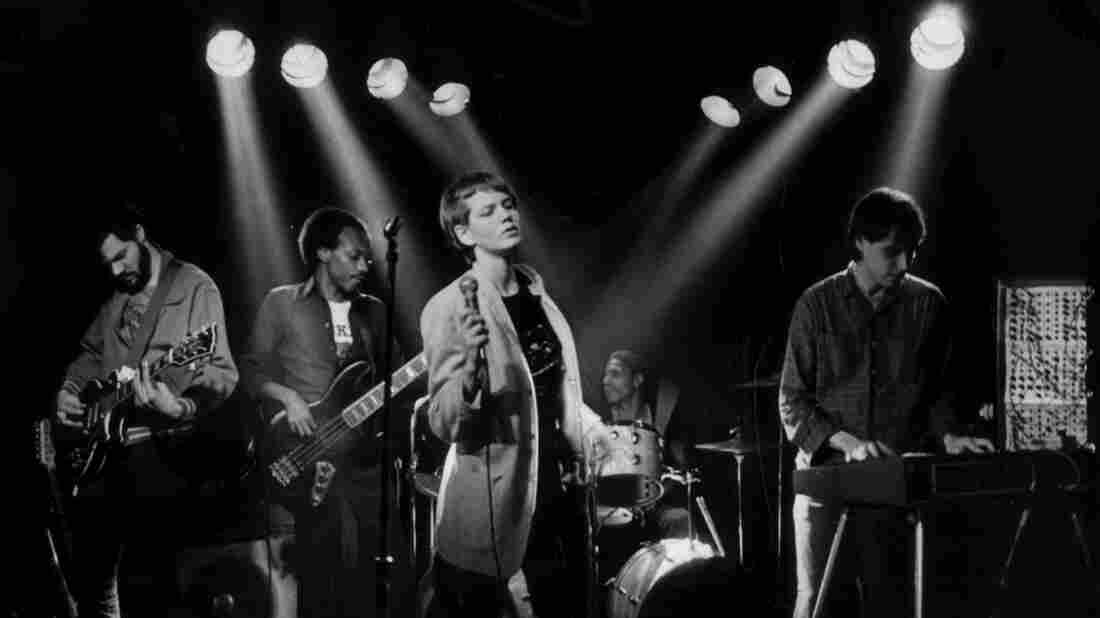 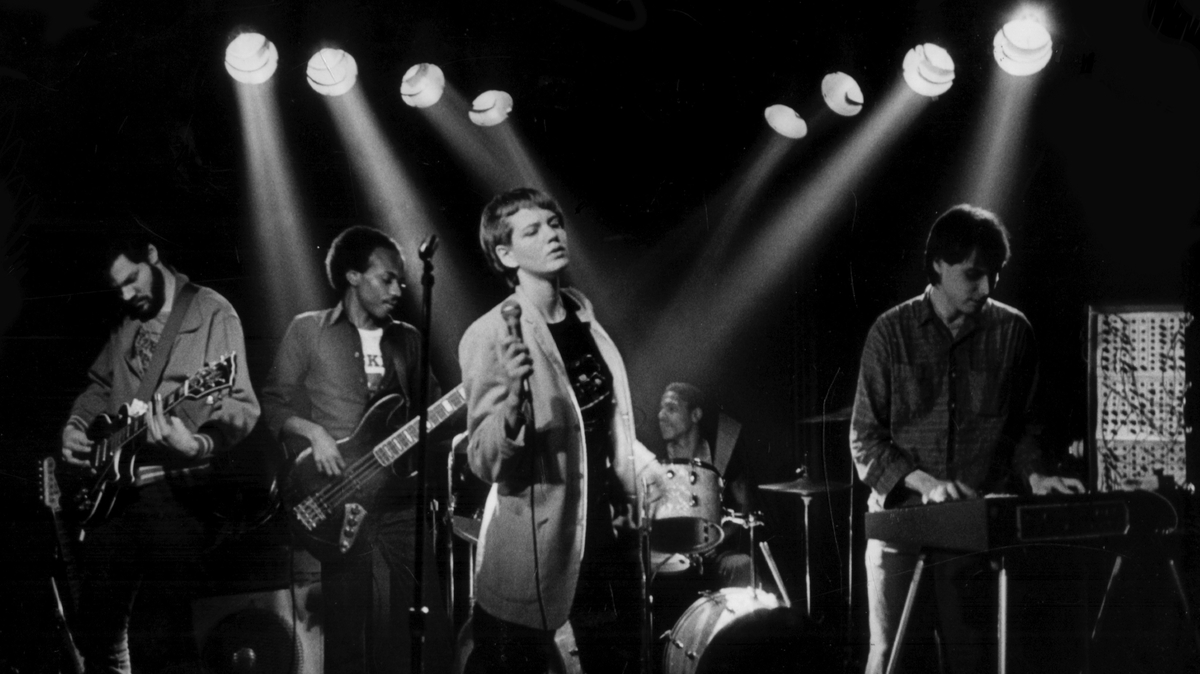 In 1980, there were few clubs to see bands, especially regional bands, play their original music. I would know — I was in one of those bands, Tiny Desk Unit. Where I lived, in Washington, D.C, the options you could find if you wanted to hear rock and roll were nearly all bars, not clubs, and what you'd encounter there were bands playing mostly cover tunes, some hoping to sneak in a few originals, often to the dismay of the bar crowd.

Into that environment, 40 years ago this weekend, D.C. got something new: The 9:30 Club opened at the end of May 1980 at 930 F Street in downtown D.C. A line from the 9:30 Club's typewritten opening announcement will give you a sense of the groundbreaking nature of this day. They called themselves the "first non-disco niteclub to open in downtown D.C. in thirteen years."

We had little idea of the role clubs would come to play in the development of music and scenes, but from the start, the 9:30 Club wanted to support the blossoming wave of new bands playing original music forming in the wake of the punk and new wave scene. Those sorts of groups were mostly playing makeshift venues, with rented sound systems, monitors (if you were lucky), and pretty DIY. New York and likely L.A. were exceptions. In fact, Tiny Desk Unit had just returned from a NYC show with a real stage and a pro sound system. It sure beat what we were used to, playing a restaurant that just cleared away some tables to make way for the band. 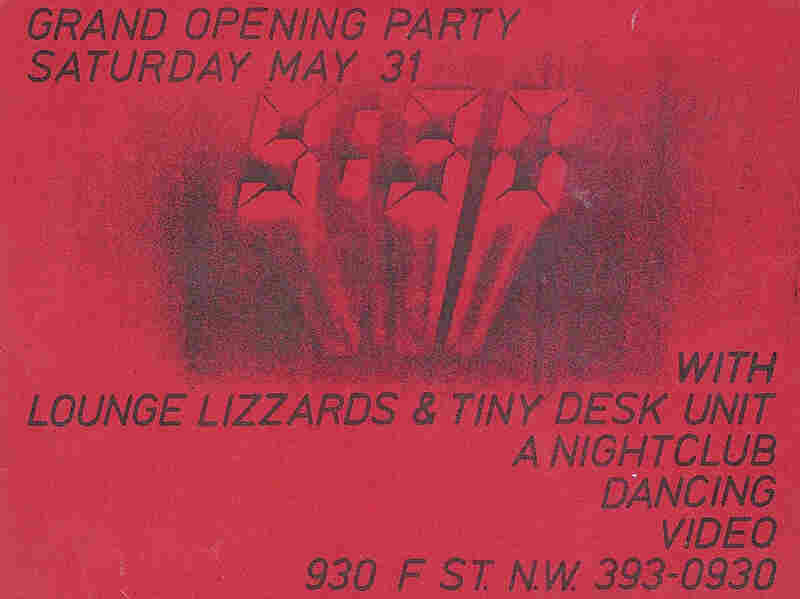 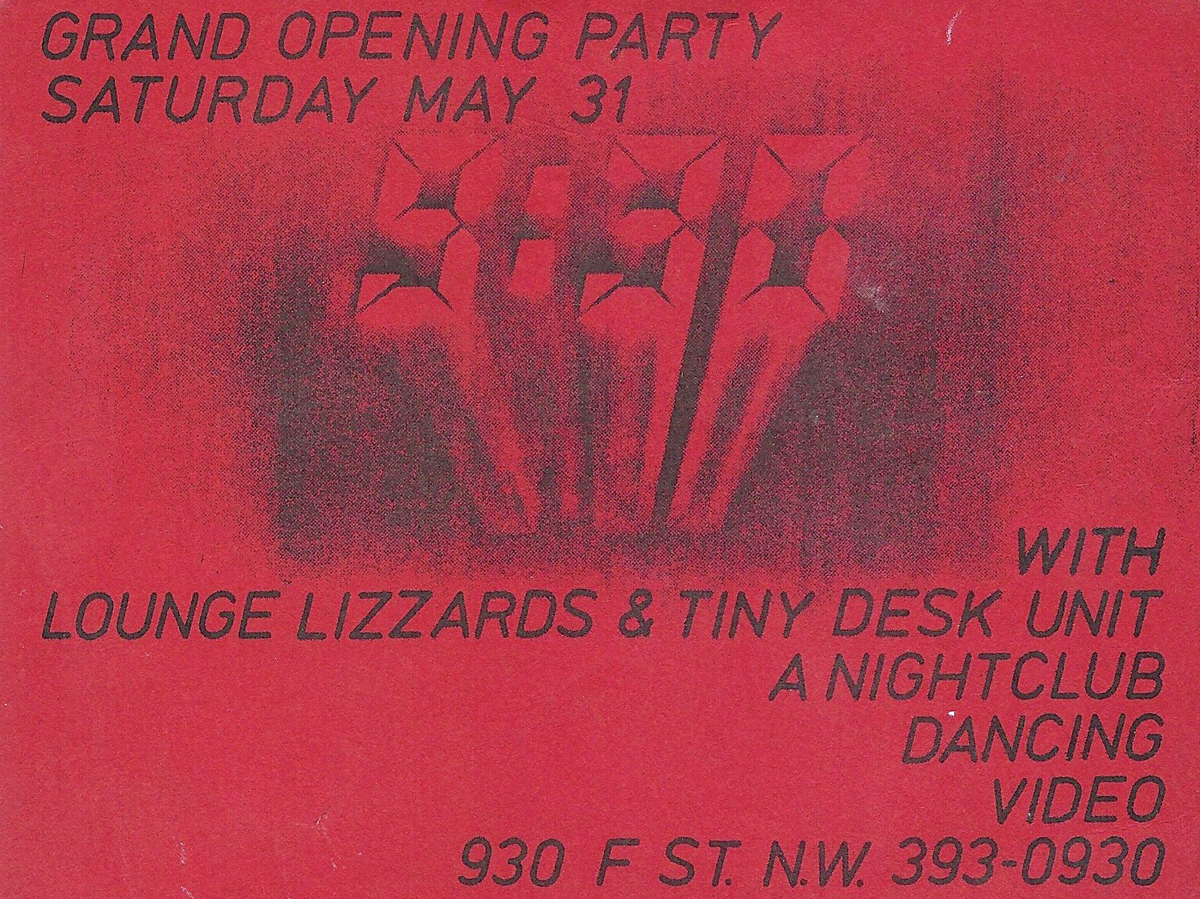 On the night that the 9:30 Club opened to the public, Tiny Desk Unit became the very first band to step onto its stage. And though there's a romantic notion to "doing it yourself," standing under the lights on that opening night at the 9:30 Club was an absolute thrill. There were real monitor speakers so we could hear each other and an awesome PA system. And that thrill didn't only make us better performers — as someone who saw an awful lot of shows there, it was pretty exciting to be in the crowd and hear live music that sounded incredible.

Dody DiSanto, who ran the club (her then-husband Jon Bowers was co-owner), was an artist, and her aesthetic had more to do with creating a scene than raking in money. The original venue, about a mile from the Washington Monument, had a capacity of 199, small in comparison to the current location, which holds closer to 1300 people. In those original days at 930 F Street, the club would often match local bands as support acts for touring bands from around the world. On opening night, Tiny Desk Unit was supporting New York's Lounge Lizards, featuring brothers John and Evan Lurie, Arto Lindsay and Anton Fier. These were heroes of ours — as were Pere Ubu, who we opened two sets for a few months later, the night we also recorded our live album at the club. I still remember the intense heat of the eve; air conditioning wasn't the club's strength. I remember getting on stage after singer David Thomas and stepping on the sweat-soaked carpet. 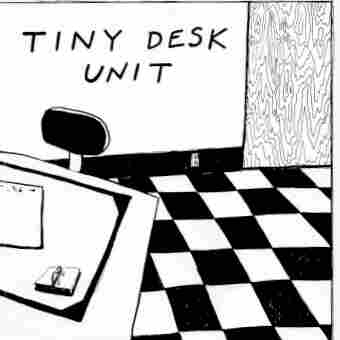 The area of town was somewhat foreboding at night. Around the block, the FBI's J. Edgar Hoover building was still pretty new and defined the neighborhood, the tourists didn't walk the streets once the sun went down and so when the workers went home it was desolate except for those stalking the many pornography shops and the very few, including myself, who lived around there. I lived above a bar called Whitlow's, around the corner from the club, with our drummer at the time, Chris Thompson. Our guitarist Michael Barron, the brains behind the band, and singer Susan Mumford lived a few blocks away next to the only other music venue/restaurant/gallery/bar - d.c. space.

The basement of the club was Tiny Desk Unit's rehearsal space. It was dingy, moist and rat-infested space, but we we could make all the noise we wanted on nights when the club was closed. I remember, after I built my Serge Modular synthesizer, opening its case to see gnats or some sort of small flying bugs emerge from the patch points of my stellar new synth. The entrance to that basement was adjacent to Ford's Theatre, the place where Abraham Lincoln was shot. The contrast of tourists in the day and the odd characters who played or came to the club never escaped me.

But the disgusting stuff aside, I saw some of the best music of my life in that club in the early 80s; Bush Tetras, Delta 5, Lydia Lunch, James Blood Ulmer, The Cramps, John Cale, Killing Joke, Glenn Branca's massive guitar orchestra, Bad Brains, the Urban Verbs and so many more. The 9:30 Club did a three bands for three bucks night, and where most clubs existed to sell drinks, the 9:30 Club and its staff welcomed underage kids who couldn't drink but loved music. I believe this nurtured the amazing punk harDCore scene that was taking form. Bands like The Penetrators, Minor Threat, Rites of Spring, Teen Idles and Government Issue are some names that quickly come to mind.

Tiny Desk Unit broke up about a year after that opening date, but we stayed connected — with each other and the club — in many ways. I kept going to shows — in its 40 years I've seen many thousands of bands play the 9:30 Club stage and its staff are always so welcoming to bands. The sound, so often so good, is why it's one of the best places to see a show. Tiny Desk Unit reunited for the club's 10th anniversary, and again to play the very last show at the original F Street space on New Years Eve 1995. We got together again to celebrate the club's 30th anniversary at the incredible stage new owners Seth Hurwitz and Rich Heinecke opened at its current location in 1996.

For about five years in the 1990s I lived in the country, and my connection to live music was down to a show every now and again. I began to appreciate what it was like to live somewhere without access to a remarkable nightclub. In 2005, five years into creating and hosting All Songs Considered for NPR, I approached the 9:30 Club about live webcasting shows from the club. Internet connectivity was coming up to speed for many households, and so an audio stream from the club seemed a way to share the wealth of talent I felt so privileged to access. This year I had that thought again. At the top of May I realized that there would be no in-person celebration for the club's 40th anniversary, that I wouldn't get to see the smiling faces of the staff, the thousand fans finding community for a special evening. I began thinking about the archives of the 9:30 Club shows we recorded, over 100 concerts by bands like Bright Eyes, Animal Collective, Sleater-Kinney, Cat Power, Wilco, Lucius, Sonic Youth, Spiritualized, James Blake, Femi Kuti, the Arctic Monkeys ... the list is long and the sound is wonderful. We have resurfaced those concerts — most just audio but some with video — for this, the club's anniversary weekend. With all of us likely missing live music, here's a way to celebrate and remember why it's so vital.

At this point in a normal year I would have seen over 200 bands. Now as I sit at home — 10 weeks since my last show and no hopes of walking into a club anytime soon — I hope we can take a moment and celebrate your favorite club and the many places of joy around the country, closed and, in all likelihood, with an outlook that isn't immediately hopeful. The club life we all so took for granted for the past 40 years is in a frightful state, and we may lose many venues around the country and the world that form those close nightly community bonds, friendships and inspire creativity. I would never have become a musician, become the director of All Things Considered, created All Songs Considered or Tiny Desk concerts if it weren't for the creative class I bonded with at that nightclub.

So in that spirit, celebrate the clubs in your town. There are many more venues in D.C. now than there were in 1980, but not all of them are likely to survive this pandemic. There's a newly formed organization called NIVA is taking action to help support venues. If there's a club you love, new or old, remember that they are part of the fabric of your community. These places that have given so much to us and, in turn, to the artists who have energized, galvanized and changed many of our lives.

I miss that world so much. I can't wait for it to come back.