Accessibility links
NPR Music's No. 1 Albums And Songs Of June : All Songs Considered From the foreboding final track of Run The Jewels' RTJ4 to pianist Jenny Lin's heart-soothing Philip Glass performance to SAULT's timely Untitled (Black Is), hear the voices of the NPR Music staff share their picks. 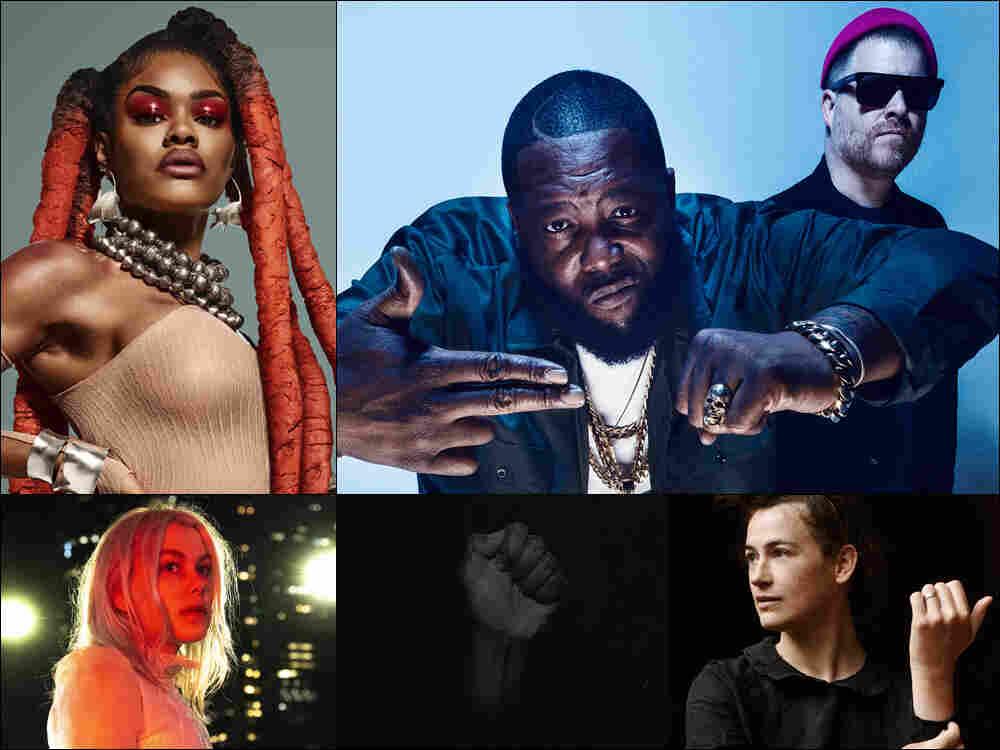 On this edition of All Songs Considered, we play our favorite music from June. From the foreboding final track of Run The Jewels' RTJ4 to pianist Jenny Lin's heart-soothing Philip Glass performance to SAULT's timely album, hear the voices of the NPR Music staff share their picks.

This Is The Kit: "This is What You Did" from Off Off On

This Is The Kit is the music of British artist Kate Stables and band. "This is What You Did," from the forthcoming Off Off On out in October, is about being in your own head and knowing the need to get outside — not only from your own thoughts, but out into the world. — Bob Boilen

SAULT: "Monsters" from UNTITLED (Black Is)

As protests around the deaths of George Floyd, Breonna Taylor, Ahmaud Arbery and Elijah McClain rage on, SAULT's UNTITLED (Black Is) poignantly addresses our time. This record is about the emotional toil of what it means to be Black, but also the change that is starting to take place. As the first song, "Out the Lies," begins with a chant ("The Revolution has come"), it also ends with an affirmation: "Black is so warm and so pure / And when everything else fails / Black endures." — Suraya Mohamed

Phoebe Bridgers: "I See You" from Punisher

Phoebe Bridgers has had an amazing and prolific run in just the span of three years. She had a great first album and then launched two supergroups as a member of boygenius and the Better Oblivion Community Center. In that time, her toolkit and her cast of collaborators have both grown, but Punisher still feels deeply interior, full of dark and distinct observations about isolation and alienation. These strange, morbid, lovable and quotable songs couldn't have come from anyone but Phoebe Bridgers. It's remarkable how, in such a short time, that she's developed a sound palette that you can easily identify. You can feel these songs in your chest; you hang on her every word. — Stephen Thompson

Teyana Taylor: "Come Back to Me (feat. Rick Ross & Junie)" from The Album

As Teyana Taylor explains, this is the album she's always wanted to make. It covers every facet of who she is as a musician; it's complete. "Come Back to Me" opens with her daughter singing; it also features a crazy verse by Rick Ross. — Bobby Carter

For the last few months, it's been important for me to be in the moment. The pandemic, the protests, the long overdue racial reckoning — I don't want to move on, I want to move forward. Music helps me navigate emotional spaces and few have struck me like hybtwibt? (have you been through what I've been through?), the mixtape by Space Afrika. The electronic duo typically makes music influenced by its home in Manchester, England: grey, atmospheric, ghostly. But here, through bleary sound collage, ambient dub and spoken word, they create an interior travelogue of a mind winding through grief. — Lars Gotrich

Special Interest: "Street Pulse Beat" from The Passion Of

Special Interest isn't messing around. The New Orleans-based band was named after the catch-all section in VHS rental stores that housed cult films and weirdo stuff, and it's a fitting descriptor of the band's no-wave-y, synth-punk sound. The Passion Of, the group's second album, is abrasive and loud with a definite groove; its songs cover violence, obsession, injustice and queer desire across what the band fittingly describes as "an apocalyptic celebration." — Marissa Lorusso

Run The Jewels: "a few words for the firing squad (radiation)" from RTJ4

Foreboding as a thunderhead, eerie as a midnight sun, "A Few Words for the Firing Squad (Radiation)" summons all the cinematic sweep of Run The Jewels' riveting RTJ4. Lyrically it's a feat of compression, as El-P and Killer Mike reflect on the cards stacked against them, the evolution of their motives and the consequences of their actions. The emotional palette is unruly, nearly overwhelming — tenderness, grief, defiance, bitter irony — but by rooting every utterance in the personal, both MCs keep the narrative free of confusion. And the tensile string arrangements, along with Cochemea Gastelum's wailing tenor saxophone, amplify a feeling that the stakes couldn't possibly be higher, for Run the Jewels and for the rest of us. This is the sound of a dawning reckoning, and the capstone to an album extraordinarily in tune with our time. — Nate Chinen, WBGO

Arca: "No Queda Nada" from KiCk i

"No Queda Nada" means "there's nothing left"; it's a Spanish phrase often used in songs to express the ultimate romantic surrender, total immersion with a lover, the height of romance. It's the final song on Arca's amazing new album KiCk i and one of its few ballads. Alejandra Ghersi and her lover Carlos Sáez would say, "No queda nada," to each other at the end of every conversation when they first got together. Ghersi builds an incredibly immersive sound world around the phrase in this song, and her tender vocal speaks not only about love for another, but a kind of reconciliation with the self — a true awakening. It's a gorgeous coda on an album all about becoming whole. — Ann Powers

Philip Glass' Mad Rush might offer a kind of balm for your head and heart these days. I recommend sitting still and letting the music wash over you. There are gentle, teeter-totter rhythms, repeating and shifting oscillations, harmonic turns that have a bittersweet yearning to them and passages of intensity that crest like big ocean waves. The title might be Mad Rush, but Glass' music, under the fingers of pianist Jenny Lin, induces, for me, a distinct tranquility. – Tom Huizenga