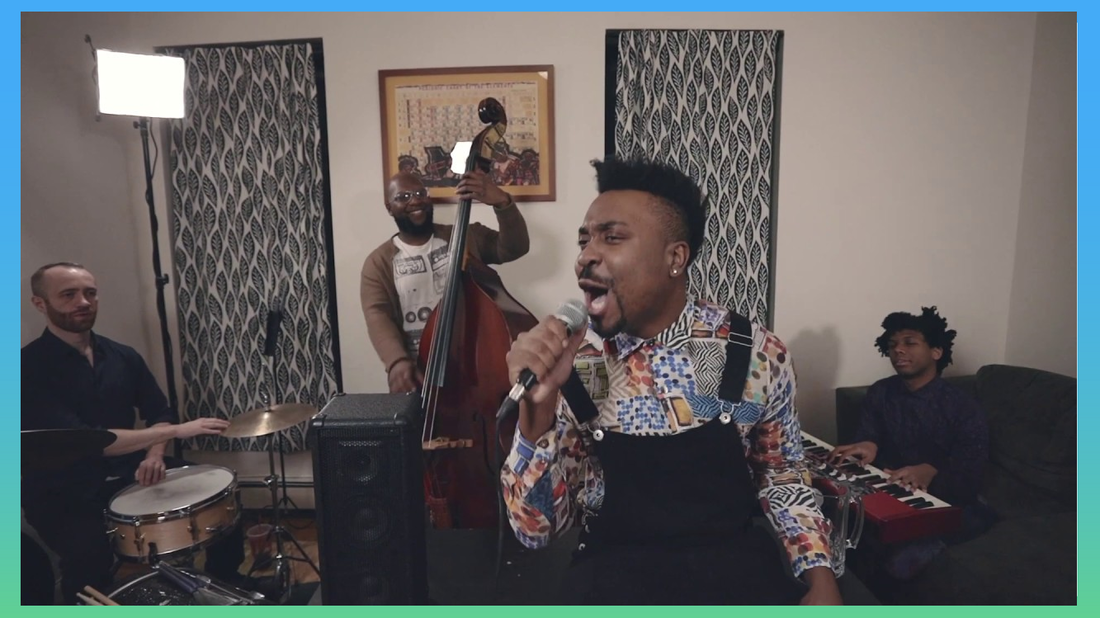 Each year, the Tiny Desk Contest receives entries from all 50 states — and that's thanks in part to help from our friends at NPR Member stations. This year, the Contest introduced us to so many new artists and brought us new songs from previous entrants we love. Today, we're sharing some great entries chosen by Member stations across the country.

For the past few weeks, as our judges have been poring over entries to find a winner, Bob Boilen and special guests have been watching and discussing standout entries live on YouTube on Tiny Desk Contest Top Shelf. This week's episode will be co-hosted Rita Houston of WFUV, and next week's episode will be co-hosted by Kevin Cole of KEXP; you can tune in Thursdays at 3 p.m. ET.

"Green Tea Ice Cream" is just what you want after a long day of work. Linda Diaz's smooth and silky voice welcomes you in and offers comfort. The song acknowledges what a grind life can be, constantly working and wondering what you are even working towards. There is an authentic urban feel to it too, with vivid details that transport you right into NYC, walking over "gum and pennies on the streets" and hearing "sirens in the dark." Diaz reminds you to take a breath, think about simple pleasures and linger in that warm space for a while. Her band provides the perfect groove to kick back and get comfortable while Diaz and her backing singers serenade you into felicity. The song has vibes upon vibes of relaxation and is a mood transformer. It truly is a sweet treat. —Alisa Ali

Charles Turner & Uptown Swing's "Harlem Harlem Harlem" feels, in so many ways, like a summer anthem to NYC. Harlem: "It can't be renamed. And it will remain," sings Turner.

The song is a march, if you will, set to the light swing of Charles' band as his powerful and charming voice name-checks locations and moments in time for a neighborhood known world-wide as a beacon of Black pride. Each verse kicks the intensity up a notch, first adding horns, then a sizzling ride cymbal and swinging sixteenth notes on the keys. Props to the video performance; the band's casual set-up makes you feel like you're at a great house party just a few feet away from Turner and the band kid as they jam with each other. By the time the tenor sax solo kicks in, you'll be nodding your head in time, shouting "Yes! Take me to Harlem, too." And it will remain. —Eric Gottlieb

"One day, they'll remember me as the girl who pressed her heart in vinyl." Anyone with a dashed dream and a renewed purpose can relate to the story of progressive R&B artist Whitney H. As she shared with WFAE in a recent interview, "Leave It Alone" was inspired by a break-up and break-through with the music industry: "They were trying to create a certain image, and I completely dropped everything to conform to what was being demanded of me," she says. "And that really hurt. I didn't even have the desire to be an artist because it felt like a burden. I eventually got back into music because others inspired me to not leave it." —Joni Deutsch, WFAE's Amplifier

As her last name would imply, Emily Sage has the (musical) power to uplift spirits and inspire mindfulness through her work. On "Guiding Light," the Charlotte-by-way-of-Portugal artist transforms a pop lullaby into a beautiful bossa nova with the musical help of Evan Brice on keys, Chris Kee on drums and Marcus Jones on saxophone. —Joni Deutsch, WFAE's Amplifier

Eliza Blue, "Let There Be Light"

Filmed at dusk atop the rolling prairie hills of her family's small ranch near Bison, S.D., Eliza Blue's "Let There Be Light" and its gently swelling call to better days is a soothing pandemic panacea. Singer/songwriter/banjo player Blue recorded her last album (South Dakota, First of May) with former Neil Young's Crazy Horse bassist and unlikely fellow Bison-dweller Billy Talbot. n this video, she strums her acoustic guitar and sends her clear, bright vocals out in hope across Middle America. —Katy Beem

"Shredding" is not usually a word associated with the harp, but Lily Bloom makes a strong case in her Tiny Desk Contest entry for "Ghost" (which also earned the title of WOSU's local favorite entry this year). Surrounded by half-drank bottles of whiskey and well-tended succulents, and with a voice that's equal parts bluesy and silken, the Columbus musician excises the specter of a dead relationship. Writing the song was healing in itself, Bloom says, and you can hear the catharsis come out of every finger. —Gabe Rosenberg

Mercedes Aviles, "You Will Go"

Above a delicate loop of plucked strings, the Columbus violinist Mercedes Aviles coos, "You're my fine wine, my grapes, my leaves, my vines." But the bouncing melody is bittersweet: "Why must we say goodbye yet another time?" she asks and asks again. Then the loop breaks, and Aviles takes on a sneer, her tone accusatory, harmonies discordant. By the end of "You Will Go," you better hope you're on her good side. —Gabe Rosenberg

Vivian formed from the ashes of the band Stella Luce. Former bandmates Tim Massa and Alan Rolfe decided to collaborate, which turned into something wonderful professionally and personally as the relationship blossomed into a romance. In the entry video for "Tick Tock Talk," the chemistry between the two is obvious: a shared smile and a knowing glance bring us into their world — a world of hope, joy and a perspective that makes it hard to leave. —Benji McPhail

Matthew Wilburn Skinner is a force of nature. He is a master on the guitar, can keep a steady rhythm going on the tambourine and delivers insightful lyrics with the passion of a poet. "After Disaster" demonstrates all these skills. Skinner comes across as a modern-day troubadour. There is an old soul quality to this song that makes you want to listen intently and soak up as much wisdom as you can. —Benji McPhail

As Makebelief, Schuyler Petersen plays drums in time with his sweeping loop sequences. His cymbals act like exclamation points between colorful splashes of sound; his face warps and contorts to make his vocals as expressive as the soundscapes he warbles over. If you space out to Animal Collective, Battles or Dan Deacon, I think you'll find rich rewards the longer you listen to Makebelief. —Nick Brunner

The Matt Shenk Band exists in that sweet spot between technical expertise and heart. The well-crafted folk rock of "Lay Down Your Weapons" is catchy and warm, centered around Shenk's deft acoustic guitar and layered with rich harmonies. Shenk's earthy vocals anchor the tune, while creative percussion and a soaring violin give it wings.

After you watch the band's Tiny Desk Contest entry, do yourself a favor and check out the band's most recent song "Keeping Up The Fight," a moving tribute to the first responders and essential workers keeping us all safe during the pandemic. Shenk's songwriting skills shine. And your eyes might, too, so have a tissue handy. –Nicole Darden Creston

E-Turn utilizes a multitude of deliveries to remind you of all the great things you love about hip-hop. In her Tiny Desk entry, "What's It All For?," she brings you inside her inner thoughts about a subject we can all relate to. Why am I doing this? Why did I pick this path? Will the sacrifices be worth the reward? E-Turn takes you on a journey to answer those questions as she mixes in a soulful chorus showing her versatility as an artist. –Talia Blake